A log truck heads to the Georgia-Pacific paper mill. The company eliminated 650 jobs with the shutdown of its office paper operations at the mill due to declining demand. About 300 people continue to work at the mill producing toilet tissue and paper towels for retail purchase. 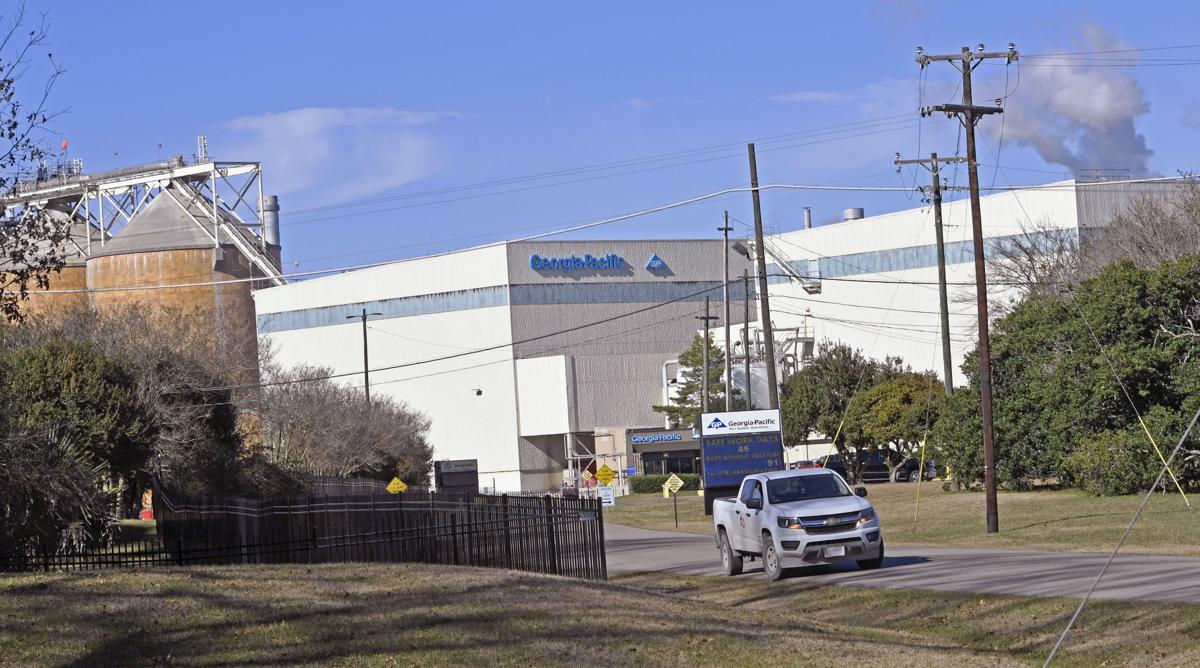 Georgia-Pacific will lay off nearly 700 people as it shuts down office paper operations at its Port Hudson mill due to declining demand. About 300 people will continue to work at the mill, producing toilet tissue and paper towels for retail purchase.

A log truck heads to the Georgia-Pacific paper mill. The company eliminated 650 jobs with the shutdown of its office paper operations at the mill due to declining demand. About 300 people continue to work at the mill producing toilet tissue and paper towels for retail purchase.

Georgia-Pacific will lay off nearly 700 people as it shuts down office paper operations at its Port Hudson mill due to declining demand. About 300 people will continue to work at the mill, producing toilet tissue and paper towels for retail purchase.

Georgia-Pacific’s decision to stop producing office paper at its Port Hudson mill and lay off 650 people could ripple into an estimated loss of nearly 2,150 other jobs across Louisiana, an economic model produced by an LSU AgCenter economist shows.

The layoffs will result in the loss of nearly $188 million in labor income and nearly $22.8 million in tax revenue for state and local governments, said Shaun Tanger, a forest economist at the AgCenter.

“This is a conservative number,” Tanger said. The figures don’t capture the ripple effects into nearby Mississippi, where some people live and work in the timber/paper industry and could be doing the lion’s share of their business in Louisiana, he said.

Georgia-Pacific is shutting down a major division of its Baton Rouge-area paper mill, a move that will leave nearly 700 people without a job a…

Georgia-Pacific announced Thursday it will permanently shut down its office paper machines, converting assets, woodyard, pulp mill and most of its energy-generating complex at Port Hudson by mid-March. About 650 of the jobs being lost at the facility are in the office paper and pulp assets, and about 40 more business and sales jobs are being lost primarily in Atlanta where Georgia-Pacific is based. The company, which has been owned by Koch Industries since a 2005 acquisition, is leaving the paper communications business entirely.

About 300 jobs will remain at the Port Hudson mill, making toilet paper and paper towels.

The plant layoffs will ripple across the south Louisiana economy, affecting everything from businesses that directly feed into the paper production process, such as commercial loggers, truck drivers and plant maintenance workers, to businesses that are buttressed by the paper mill, such as nearby restaurants and stores, Tanger said.

Wholesale trade is forecast to lose nearly 170 jobs as a result of the partial plant closure, while Tanger’s forecast indicates that commercial logging could lose 135 jobs and nearby restaurants would lose just over 130 jobs. Other areas that could be big losers include management of companies and other enterprises, which would lose nearly 90 jobs, service to buildings, which would take a hit of just under 80 jobs, and truck transportation, over 60 jobs.

Along with the loss in jobs and tax revenue, the prices that nearby landowners will get for their hardwood and pulpwood is expected to fall because of the reduced demand from Georgia-Pacific. When International Paper closed a mill in north Alabama in September 2013, Tanger said pulpwood prices were down by nearly 36 percent two years later.

The Zachary School Board could face a budget crunch in the future when the property tax bill falls on the plant. While Georgia-Pacific has benefited from millions in tax breaks over the years, the property taxes it does pay comprise a significant portion of the school system's budget.

As recently as mid-December, Georgia-Pacific was seeking a $2 million tax break for a $42 million expansion project at the mill, a project the firm said would create 30 jobs. Following the mass layoff announcement, the firm said Friday it was canceling its request.

"This morning we're requesting to the Commerce and Industry Board to not move forward with our ITEP project because we clearly won't meet the job requirement component of it," said Georgia-Pacific spokesman Kelly Ferguson.

Georgia-Pacific said Friday it is dropping its request for a $2 million property tax break that promised 30 new jobs, a day after the firm ann…

The Industrial Tax Exemption Program, or ITEP, is a controversial incentive program for manufacturers. Local officials have a say in the program because of a 2016 executive order from Gov. John Bel Edwards.

Scott Devillier, Zachary schools superintendent, said he hopes the system will be able to absorb the partial closure and added he doesn't expect an immediate hit to the taxes paid to schools.

"As we move forward we're going to be very cautious about asking them to share information with us to see, if our property taxes are going down, could you give us a heads up?" Devillier said.

ExxonMobil is evaluating which laid-off workers could land jobs at the oil and gas giant's chemical plant and refinery a few miles south, Exxon spokeswoman Stephanie Cargile said Friday. Exxon's refinery and polyolefins plant could land major expansions in the coming months, and the firm expects to be in hiring mode during 2019.

Dow Chemical also is seeking applicants for a new apprenticeship program, according to the Greater Baton Rouge Industry Alliance. The group also indicated workers could get jobs at other industrial projects throughout the region, like Methanex and Wanhua.

Ava Dejoie, secretary of the Louisiana Workforce Commission, said the workers at Georgia-Pacific have skills that should be easily-transferable to other manufacturing operations in the region.

"They're very well-trained, very well-skilled, diligent, dedicated employees," Dejoie said. "They're quite marketable. Our job is to help those folks find opportunities at other facilities."

LWC will be able to tap federal funds to reimburse employers who train workers from Georgia-Pacific, as well as provide skills training to laid off workers directly, she said. Many of the workers will have certifications from OHSA and for work at docks, she added, making it easier to get hired on at another industrial employer.

"It's everything, not just the production people or people working on the plant side of things," she said. "It's the people that order supplies. It's purchasing...(The layoffs) cover a number of career fields."

The Louisiana Workforce Commission released the Worker Adjustment and Retraining Act notice that Georgia-Pacific submitted Thursday, outlining the timetable for the layoffs and the positions that would be affected.

According to the letter, the layoffs will start March 12 and end March 26. Forty-nine workers would stay on to decommission equipment, and they will be laid off April 29.

Of the union workers being let go, 374 work for United Steelworkers Local 335, which represents the production workers. Most of the layoffs are concentrated in the fine paper division.

Another 106 workers are members of the United Steelworkers Local 1334, which represents maintenance workers. The biggest category facing layoffs is general mechanic, which will lose 70 employees.