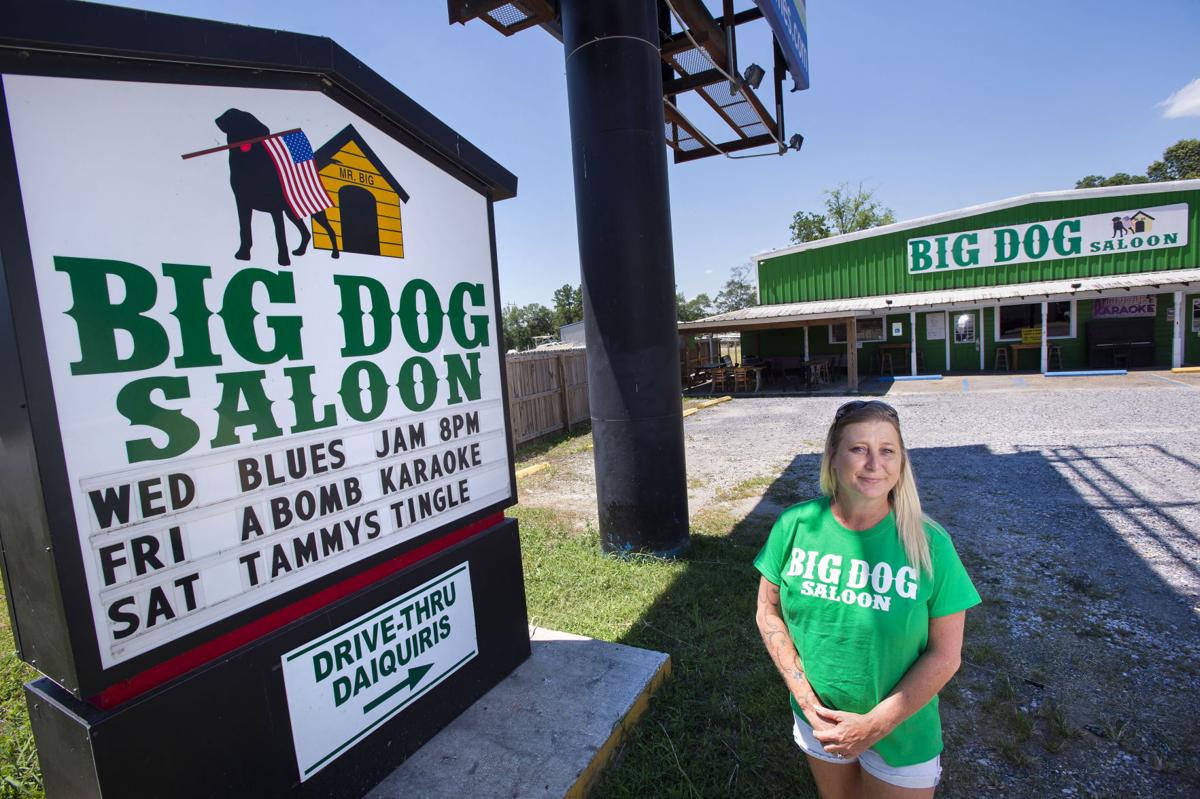 Bartender Gretchen Darone stands next to the marquee outside Denham Springs's Big Dog Saloon, showing live music performances coming up there in the next few days. Recently changed Phase 2 business reopening guidelines allow applications for permission to have indoor live music and karaoke, if the venue is approved by the State Fire Marshal's Office. 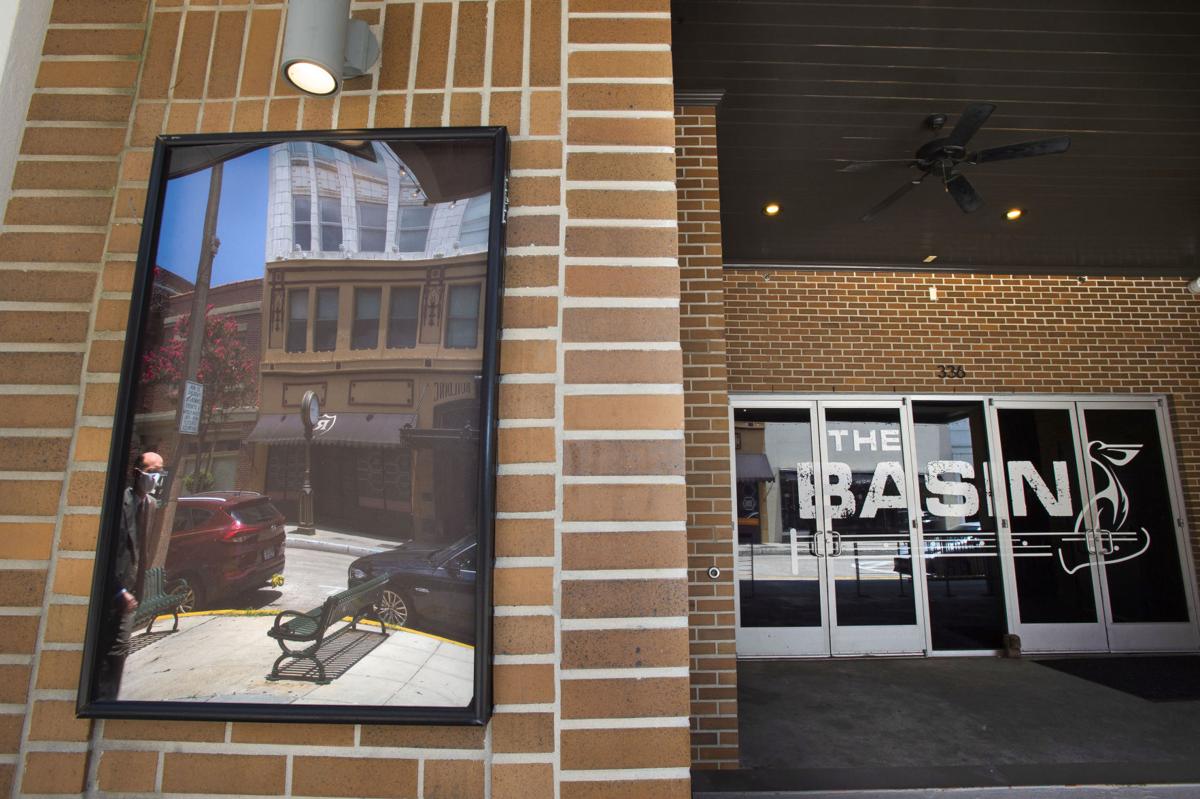 An empty marquee outside downtown Baton Rouge's The Basic Music Club reflects Third Street activity, not yet filled in with the name of a band or performer, as co-owners Jeremy Fenn and Brian Ott waited Wednesday for approval of their recent request for indoor music performances.

Bartender Gretchen Darone stands next to the marquee outside Denham Springs's Big Dog Saloon, showing live music performances coming up there in the next few days. Recently changed Phase 2 business reopening guidelines allow applications for permission to have indoor live music and karaoke, if the venue is approved by the State Fire Marshal's Office.

An empty marquee outside downtown Baton Rouge's The Basic Music Club reflects Third Street activity, not yet filled in with the name of a band or performer, as co-owners Jeremy Fenn and Brian Ott waited Wednesday for approval of their recent request for indoor music performances.

Live music venues across Baton Rouge are preparing to book bands and host karaoke night indoors for the first time in three months, with the test being whether they attract customers.

For Big Dog Saloon in Denham Springs, it's been a financial drain to keep the bar doors closed during the state-imposed coronavirus shutdown of nonessential businesses, but changes toward a phased reopening are another step in the right direction, its owner says.

"In three months, I've lost $25,000 and it will take me about two years to get that money back," said Billy Stevens, owner of Big Dog Saloon. "And that's hoping that they don't decide to close us all down again."

A change has been made to Louisiana's Phase 2 reopening guidelines, now allowing live music in Louisiana bars and clubs.

Since an adjustment was made last weekend to the state's Phase 2 reopening plans, Stevens has been coordinating with the State Fire Marshal's office to submit documentation for his bar in hopes he can have a blues band this weekend indoors. If not, he does have an outdoor patio, but the heat makes it difficult to enjoy, he said.

"We've been doing a little karaoke on the patio, but now it's 100 degrees outside and customers don't want to be out there and sweating," he said.

During the state-mandated shutdown to stem the coronavirus pandemic, the bar was cleaned and extra air conditioning units were added to help with air flow, Stevens said. The bar has a touchless thermometer to take temperatures of visitors and free masks.

"The request (the state) has made is pretty difficult for bars to do, but hopefully they are not going to make us spend a fortune to certify what we have done," he said. "We're hoping they will lessen all these rules and let us get back to work."

While some business owners have described interactions with the Fire Marshal's office as helpful, the requirements are another expense during a time when budgets are tight. One requirement is a powerful air conditioning system able to circulate clean air and filter it for customers indoors, including a separate system for the band itself. For example, the HVAC system must exchange air at least six times each hour.

The show must go on. Or at least that’s what many music venues hope.

The change does not allow all venues to host live music and requires explicit permission from the Fire Marshal's office.

It was prompted by a June 5 letter to Louisiana Attorney General Jeff Landry from the State Fire Marshal H. Butch Browning Jr., who was concerned that enforcing the governor's ban on live music indoors could violate the state constitution.

For bars that don't serve food, there is still a 25% capacity limit and those are with restaurants can have up to 50% capacity or about 30 square feet per person, based on the gross square footage of the building.

Some new requirements include that musicians must be at least 12 feet away from fans and wear masks. Not all venues are large enough to accommodate that rule.

Demand for live music indoors is high for some businesses, while others say people are hesitant to part of an audience.

Consumer spending is rebounding in Baton Rouge. But why haven't the jobs returned?

For Henry Turner Jr.'s Listening Room, a jazz club in Baton Rouge that doesn't serve alcohol, the venue had been closed for months and customers are slow to return.

"We are not able to afford plexiglass, but we spent money on cleaning supplies and have been wearing masks and social distancing," said Turner, the owner and local musician.

"People are very afraid. We're definitely suffering, and I don't know how much longer we can go on," he said.

The venue usually offers a self-serve, family-style buffet to promote community but has since changed to a bartender who serves customers.

He is concerned about the long-term impact to the music and arts community in Baton Rouge since many have not been able to qualify for or access financial aid during the coronavirus crisis. At least one of the three music festivals Turner produces was already canceled this year. He has not been approved for any unemployment benefits or federal stimulus so far.

"I think that those at the top of the power structure need to know that if they don't come to the aid of the creative community it will be years before they have one again, especially once these places close," he said.

Newer music venues downtown had only been open for a few months before the pandemic-induced closures began, like The Basin Music Hall.

Now that it appears that the venue could get permission from the Fire Marshal's office to start booking bands again, the business has been preparing for an audience.

The two-story bar and music hall doesn't serve food, so it was only able to reopen without music at a limited capacity recently. It has stocked up on masks and hand sanitizer.

"We sent over our building plans. We're waiting (before booking bands) because it's unfair to the bands if we can't do it," said Brian Ott, co-owner of The Basin Music Hall.

The bar considered a plexiglass barrier, but it wasn't a popular idea with performers. There is enough room for the 12-foot distance between audience members and bands already in the sprawling space, which if at 100% capacity could fit several hundred people.

"I think the toughest thing is that it's sort hard to plan for the future because we don't know how the next phases are going to work. We want to do a large event (someday), but there's so much unknown," Ott said.

The bar submitted all its documentation on Monday and expected a two-day turnaround from the Fire Marshal. Even so, that's a short window to arrange a band for the weekend.

"It's hard to book and promote a band for Friday on Thursday afternoon," he said.

Open or closed? Live music or not? Here's our running list of Baton Rouge's reopened bars

Live music or no live music, many of the area's bars, nightclubs and music venues are hopping again.