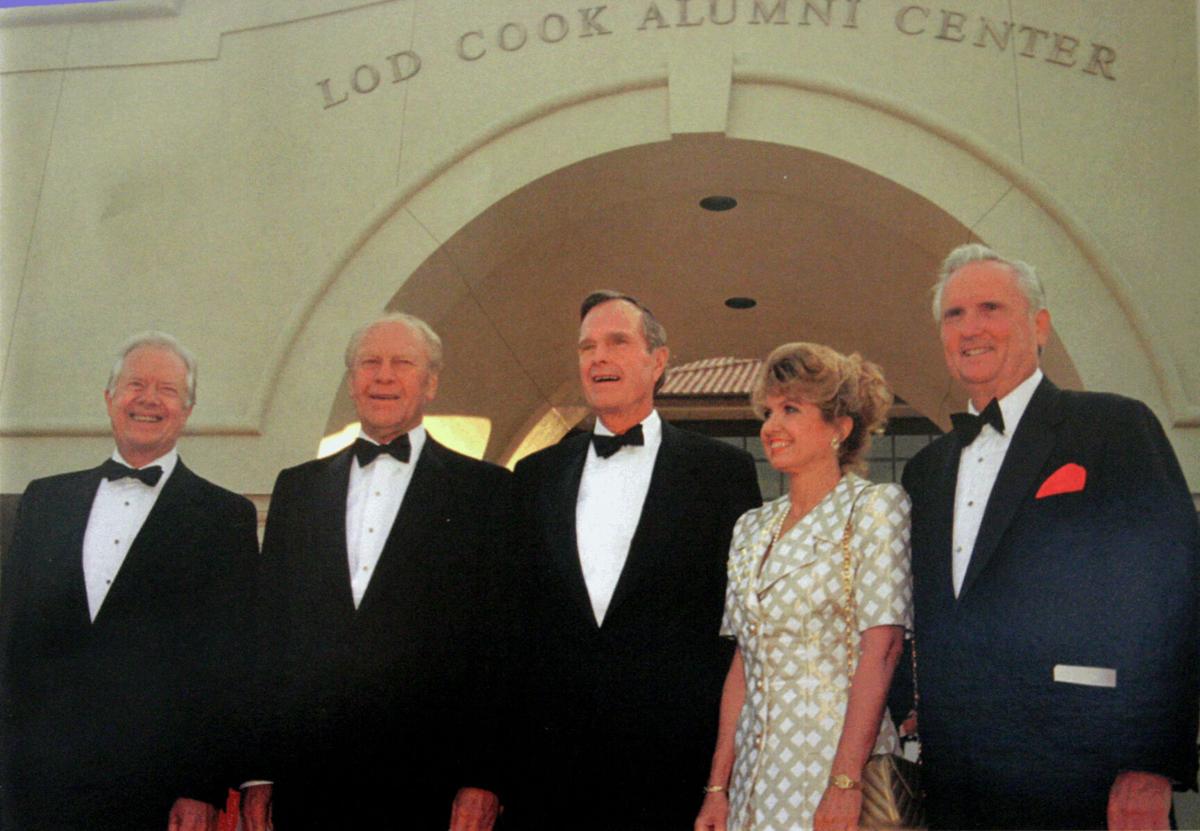 The cover of the LSU Alumni Magazine in 1994 featured a photography of, from left, former Presidents Jimmy Carter, Gerald Ford and George H.W. Bush as they stood beside Carole and Lod Cook at the 1994 dedication of the Lod Cool Alumni Center. (Photo provided by LSU Alumni Association) 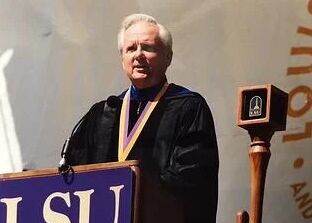 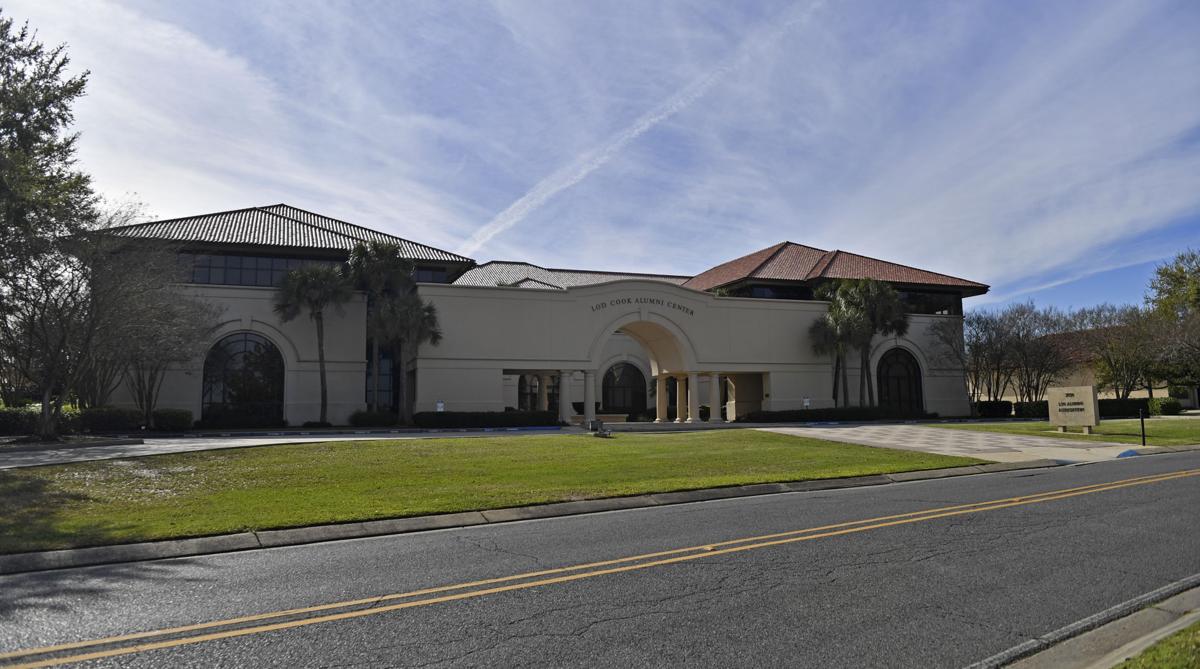 The cover of the LSU Alumni Magazine in 1994 featured a photography of, from left, former Presidents Jimmy Carter, Gerald Ford and George H.W. Bush as they stood beside Carole and Lod Cook at the 1994 dedication of the Lod Cool Alumni Center. (Photo provided by LSU Alumni Association)

Whether he was in the backwoods of Louisiana, looking down from skyscrapers in Los Angeles or in the stands of Tiger Stadium, Lodwrick Cook, the former CEO and chairman of oil giant ARCO, found a home and common ground with the people around him, friends and family said of the LSU graduate and major donor who died at 92.

Heading the seventh-largest oil company, Cook was just as comfortable among national and global leaders, luring three U.S. presidents — Gerald Ford, Jimmy Carter and George H.W. Bush — to the 1994 dedication of the namesake Lod Cook Alumni Center at LSU, a $2.7 million project that Cook and ARCO supported with major contributions. Bush returned in 2001 to dedicate the Lod and Carole Cook Hotel and Conference Center.

“We were at a (LSU) game five, six years ago, he was standing in the suite beside me. They were playing the alma mater and there he was crying,” said LSU alumni and longtime friend John Sibley Butler. “He turned and said to me 'What a song,' with tears in his eyes. He said, 'What can I do for my alma mater.'"

“He was a kind humble man who could talk to anyone,” said Charlie Roberts, former head of the LSU Alumni Foundation. “He called me last week and we were talking about football.”

It was relationships at his alma mater that Cook honed throughout his life, rekindled in the 1980s. After living for years in Los Angeles where ARCO was based, he wanted to start giving back, Roberts said.

Cook was a Louisiana native from Grand Cane, and his father William C. Cook was a sugar chemist. The family home became a bed and breakfast after being donated by Cook and his brother to the local historical society. Cook joined the U.S. Army after getting a degree in mathematics at LSU, then returned to LSU for a degree in petroleum engineering after serving in Germany during the Korean War.

“I could have gone to many other state colleges," Cook said in an interview about a decade ago. "Some of my family did go to Louisiana Tech, but I had a $50 a semester scholarship to LSU from a state senator, and that helped. I was just a country boy when I entered LSU. It had 10,000 students then and opened up a whole new world with a smorgasbord of choices."

Cook worked for the Atlantic Richfield Co., known as ARCO, for nearly four decades. He began at the oil giant as an engineer trainee in 1956 and worked his way up the ranks to become president and CEO in 1985. In 1988, he was on the cover of Forbes magazine, which declared "ARCO may well be the best-run major oil company in the U.S. today." He retired in 1995 as chairman emeritus

Roberts said he remembers how Cook negotiated a way to do the Trans-Alaska pipeline, leveraging technology by infusing the oil with an additive that would stop it from freezing.

“It was between him and some other oil company; he was a very smart man,” Roberts said.

In addition to his professional success, daughter Sherri Cook said that family and belief in God came first in their household.

“I could call him no matter where he was in the world and he always picked up the phone. We always came first,” said  Cook, an attorney who cared for her father for the past seven years in Sherman Oaks, California. Once, she remembered that her sister, Patti Chambi, took a fall from a horse and broke her knee. Cook was on the next flight to be by her side.

After a stroke three years ago, Cook, who is survived by five children and 10 grandchildren, had been bed-ridden and admirers sent their thanks.

“This man saved every letter, card and post card,” his daughter said. “The walls flutter from the cards; it made him feel loved.”

It was her father who encouraged her to consider law school and supported her through the journey, she said.

“He always had high expectations but whatever his children accomplished or didn’t accomplish, he was there,” she said.

The family would visit Louisiana every summer to meet cousins and other relatives.

It was 36 years ago this week that Roberts and Cook met each other.

Roberts said the pair would later ride around in the woods of Louisiana in a "super buggy" to enjoy nature as a retreat from the big city life.

The inspiration for the hotel and conference center, which supports scholarships for students and the university through the alumni foundation, came through Cook's own lead gift of $1.5 million plus in-kind furniture.

“We had no furniture, so he said, 'Go to Dallas, we’re closing the ARCO operation and pick out furniture',” Roberts said. “That was another $1 million in-kind. He sent an 18-wheeler and staff. He was just that kind of guy, he wanted to get you over the top.”

"It was at LSU that I learned to work as a team member and to accomplish anything you must do so as a team," Cook said in 1990 during a speech.

Years later, Cook said he was "very proud" of the hotel and enjoyed lingering during breakfast to catch up with friends, colleagues and visitors.

“He was the most delightful true southern gentlemen,” said Louis Minsky, a doctor at Baton Rouge General. “Here in Louisiana those kids need those scholarships to attend LSU, (the hotel and conference center) is a centerpiece. He really put his money where his mouth was. When he was in town, people would come down and sit at his table and have a cup of coffee.”

“You paid attention to what he said because you knew it had substance,” Babb said. “He was looking for something that would create sustaining value for the alumni association as opposed to dues being paid for it every year. That was visionary on his part.”

Even in his later years, Cook was active in companies. He was the co-chairman of a fiber optics cable business in Monroe, which was later owned by CenturyLink, and a medical tech startup to help those with epilepsy.

Cliff Vannoy said that Cook would always follow-up with a personal note and connected with everyone.

“He was nice enough to arrange a private dinner with Ron and Nancy Reagan at the Reagan Library,” he said. ”He hosted it all; there was no cost to any of us.”

Cook would host events at the Los Angeles ARCO tower as another way to give back. He was influential in the LSU Los Angeles alumni chapter.

“There are certain people (who become CEO) who burn bridges, he always kept a relationship with all the people and they were willing to get behind him,” Vannoy said. “He was like a diplomat. He would never say no and he was always working on a project helping other people.”

“Lod Cook was an amazing man and a visionary leader who was dedicated to improving his community and providing others with opportunities to pursue their dreams,” said Tom Galligan, interim LSU president in a statement.

Cook was an influential figure and had professional relationships with six U.S. presidents, according to his family.

He regularly brought those powerful figures to LSU, such as in 1993 when former British Prime Minister Margaret Thatcher received an honorary degree and gave a speech. He was even honored by Queen Elizabeth II the Insignia of Honorary Knight Commander of the Most Excellent Order of the British Empire.

"He achieved phenomenal success and, remembering his experiences at LSU, used his standing and resources to make a difference at his alma mater," said Gordon Monk, CEO of the LSU Alumni Association. "We'll be forever grateful."

Trump to be 2nd sitting president to attend an LSU game: A history of US presidents and the Tigers

President Donald Trump is expected in Tuscaloosa this weekend to watch No. 2 Alabama take on No. 1 LSU.