Customers walk and shop as the Mall of Louisiana reopened Tuesday. Most of the shoppers were wearing masks. 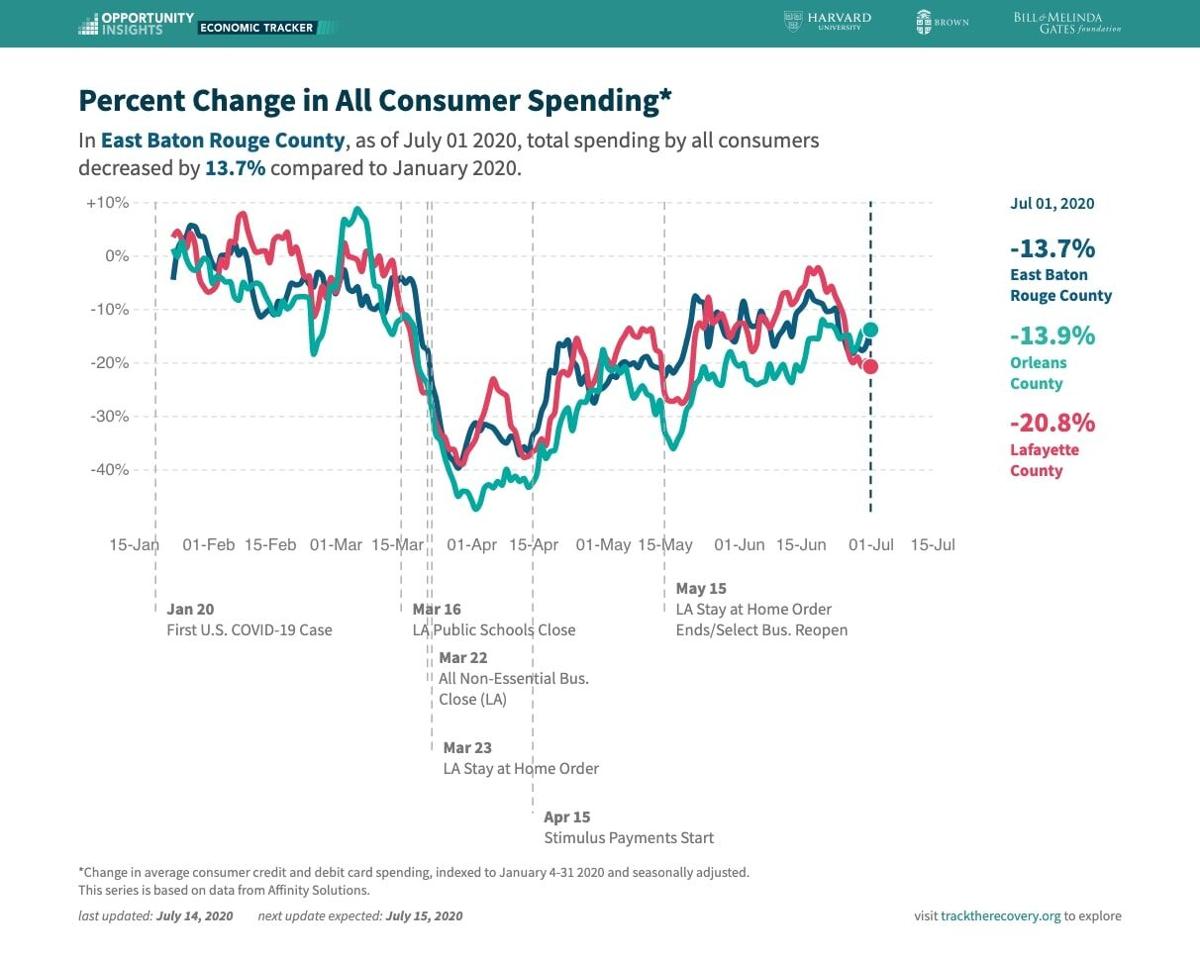 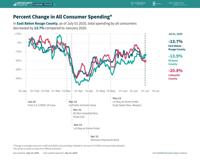 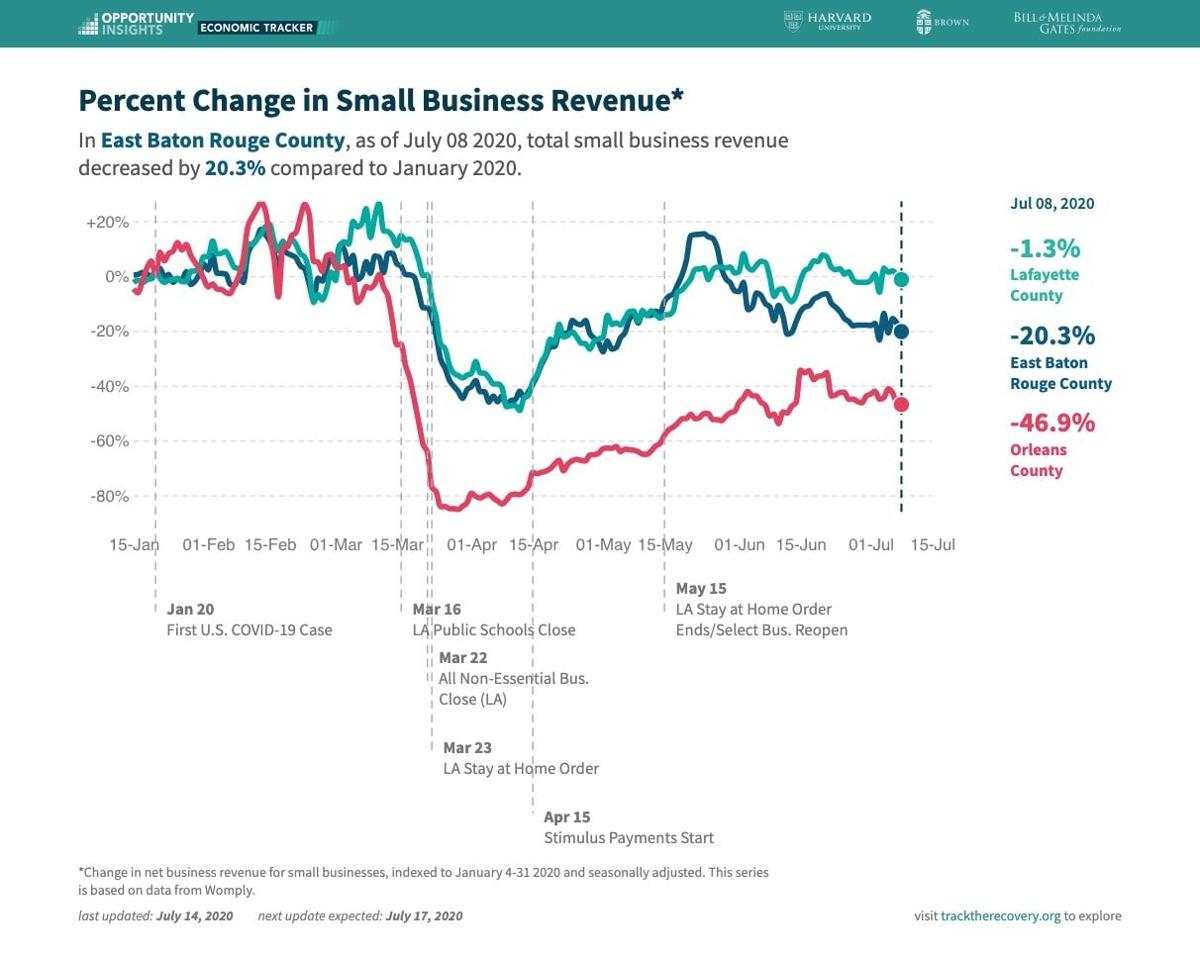 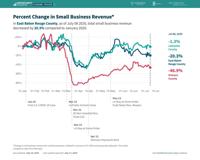 Small Business revenue since the coronavirus pandemic began has not recovered evenly across Louisiana. 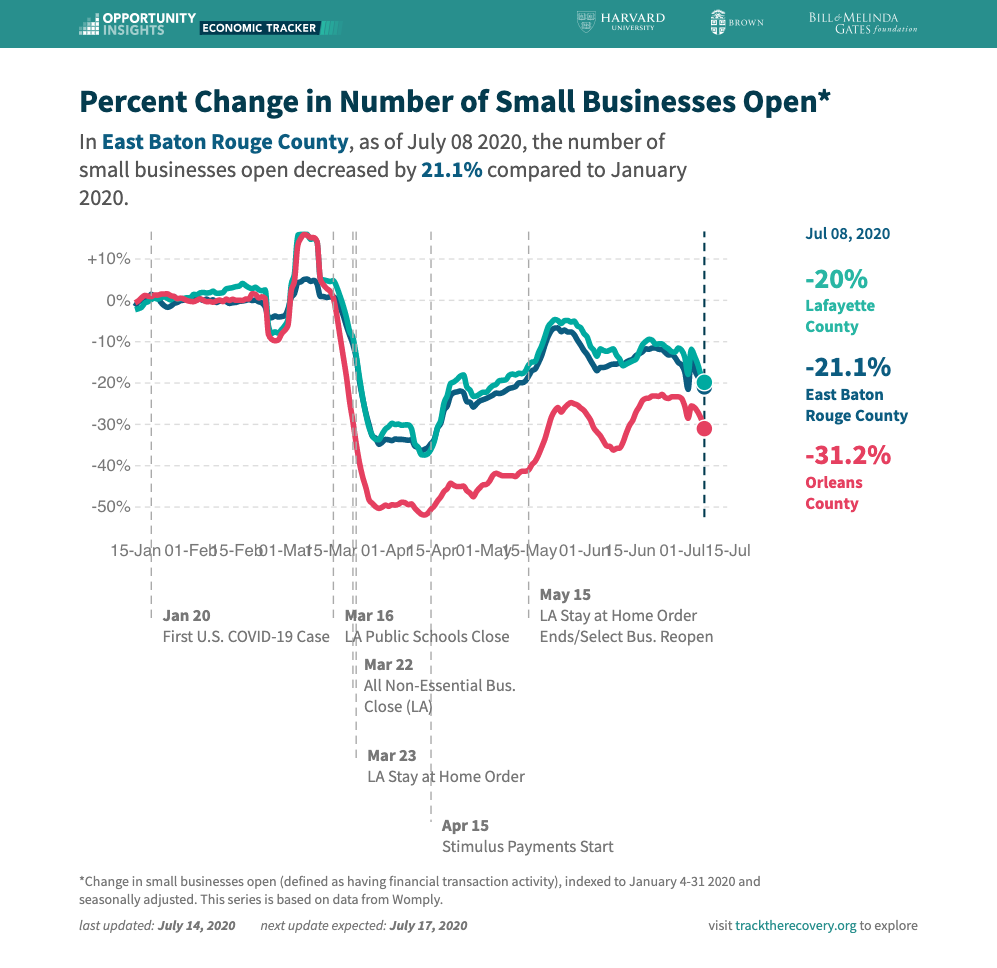 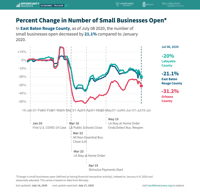 Many small businesses remained closed across Louisiana compared to January.

Customers walk and shop as the Mall of Louisiana reopened Tuesday. Most of the shoppers were wearing masks.

Small Business revenue since the coronavirus pandemic began has not recovered evenly across Louisiana.

Many small businesses remained closed across Louisiana compared to January.

The brunt of the economic slowdown from the coronavirus pandemic is falling hard on small businesses across Louisiana that have had to endure shutdowns and capacity restrictions to help slow the spread of the virus.

The fallout is slightly higher for Louisiana businesses or hovering close to national averages in economic measures that have been teased out for counties across the country to measure the impact of the pandemic through data collected by Opportunity Insights. Credit card purchases for merchants have been evaluated by the organization for the past few months to show how the country's economy is recovering, tracking metrics like revenue and consumer spending.

The measures are compared with January before the coronavirus pandemic began and in some cases show improvement from a phased reopening of the economy that began about two months after mid-March stay-at-home orders were imposed. The measures don't yet take into account some reopening reversals resulting from a new surge of coronavirus cases.

BATON ROUGE AREA: Revenue at small businesses in East Baton Rouge Parish were down 20.3% as of July 8 from January levels. That's an improvement compared with its lowest valley of 46% as of April 5. Revenue was down 11.1% in Ascension and 44.9% in Livingston, according to Opportunity Insights data. Both of those markets have also recovered from their lowest points in early April.

Some of the changes between parishes may be a reflection of commuting patterns, which have changed significantly since the pandemic began, said Andrew Fitzgerald, economist at Baton Rouge Area Chamber, which has been tracking the Opportunity Insights data weekly for the past few months.

The number of small businesses open in East Baton Rouge Parish is still down 21% compared with January. That's a recovery from its lowest point in late March, but has been back on the decline since mid-June. West Feliciana was down 11.3%; Ascension, 16.4%; East Feliciana, 20.7%; West Baton Rouge, 20%; Iberville, 27%; and Livingston, 35%.

Consumer spending is still down 13.7% in East Baton Rouge Parish as of July 1 compared with January, but had been down nearly 40% on March 29.

Consumer spending data wasn't available for all Baton Rouge metro parishes. In Livingston, it was up 1.2% compared with January but down 1% in Ascension Parish and down 20% in East Feliciana Parish.

NEW ORLEANS AREA: Small business revenue in the Crescent City was down 46.9% compared with January as of July 8. In St. Tammany and Jefferson parishes, it was down 23.6% and 15.9%, respectively. All have recovered since the lowest point when the Louisiana stay-at-home order began in late March.

The number of small businesses open in Orleans Parish was down 31% since January as of July 8. In St. Tammany and Jefferson, it was down 23.1% and 20.8% each, all of which have recovered since lows in early April.

Consumer spending was also down by 13.9% since before the pandemic began, which is better than its peak when spending was down by about 50% in March. Likewise, consumer spending in St. Tammany was only down 10.1% and 4.2% in Jefferson as of July 1. All have recovered since April.

May’s local college graduates in our COVID-19 economy can embrace this lasting lesson: There are jobs, and they are accessible.

Pizzaville USA has acquired the old Bisbano’s Pizza location in Lafayette and could reopen it this week.

See how small businesses have recovered in Baton Rouge, Lafayette and New Orleans

The Pelican State Portfolio, a group of Louisiana stocks tracked by the newspaper, fell short of the heights set by the broader market during …

When Caitlin Russo orders takeout for her family, she doesn't hide her passion for environmentalism in her requests: "Please don’t bag the foo…

How has coronavirus has affected Baton Rouge's economy? A discussion on retail, real estate, more

On Tuesday at 8:30 a.m. The Advocate will host a discussion with the theme "Bringing Back the Baton Rouge Economy," focusing on the impact and…