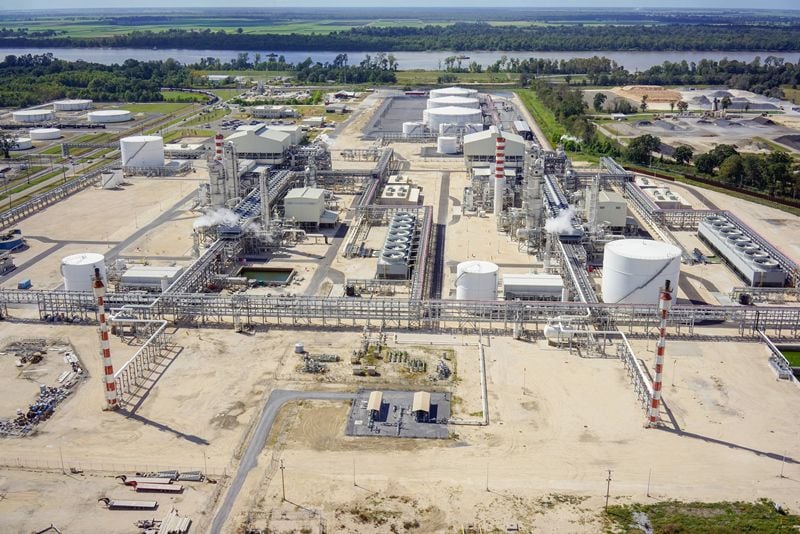 Methanex operates two plants at its site on La. 73 near River Road in Geismar. The company said in June it will build a third methanol plant in Ascension Parish, an investment of $1.4 billion, but is now evaluating its expenses and the project. 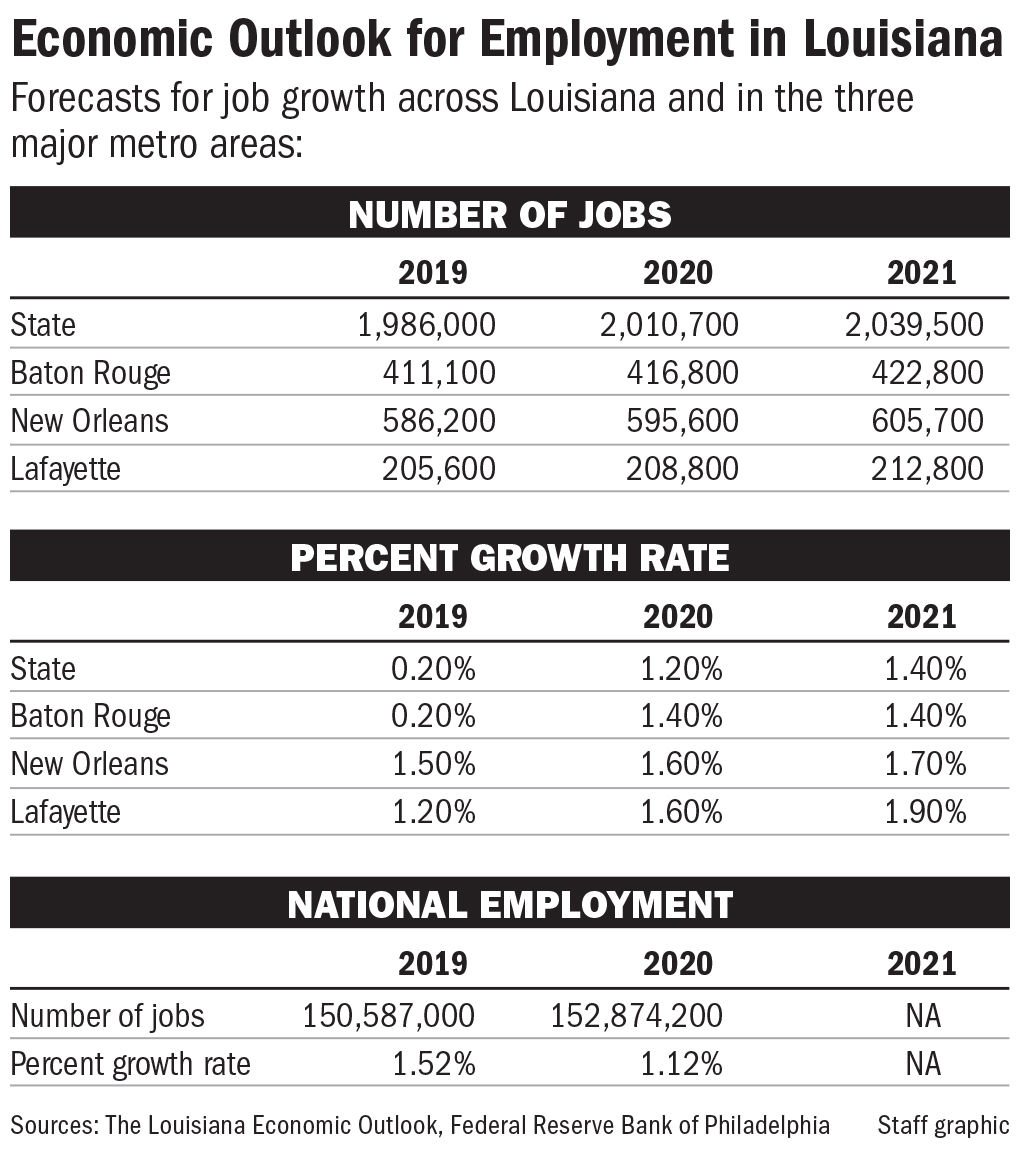 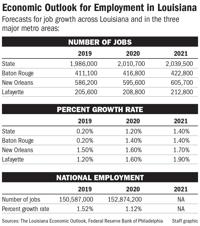 The job market in the Baton Rouge are is expected to grow slightly over the next two years and mostly track the state average as a lull in industrial activity ends and more projects in the petrochemical industry start construction again.

The local metro area is expected to add 5,700 jobs in 2020 and 6,000 jobs in 2021, a 1.4% growth rate both years, according to projections from the annual economic outlook report compiled by economist Loren Scott and Gregory Upton Jr., assistant professor and researcher at the LSU Center for Energy Studies.

"Never has this (metro area) experienced an industrial expansion like the one presently underway," Scott said in the report.

Since 2012, petrochemical companies have announced $16.8 billion of industrial expansion projects but $11.5 billion of those projects are either under construction or have been completed.

"The real driver for Baton Rouge's much improved growth rate is the resumption of activity in the industrial construction sector,” he said.

A total of $2.4 billion in projects are expected to start construction including a third Methanex plant in Geismar, an expansion of oxygen supplier Air Liquide, ExxonMobil's polyolefin plant and an expansion of the Formosa Plastics PVC production plant. Shell Chemicals is expected to make an investment decision for a $1.2 billion mono-ethylene glycol unit next year.

Several factors could sway the ultimate outcome of his projections, Scott said, including a recovery for Gulf of Mexico oil rigs, the U.S. trade war with China and the response to recent attacks on oil processing plants in Saudi Arabia that took about 5% of daily global oil production offline in early September.

In June, China increased its tariff on liquefied natural gas from the U.S. from 10% to 25% in retaliation to the Trump administration tariffs on Chinese goods. Several LNG export terminals could bring tens of billions of dollars of investment to Louisiana, some are under construction while others have not made a final investment decision.

“We are told this is the culprit for at least one LNG project to be postponed and possible canceled altogether,” Scott said. “The continued escalation could dry up demand for U.S. oil and natural gas products and provide downward pressure on prices, this would have a negative effect on Louisiana’s economy.”

The forecast is a best-case scenario, and some economists consider it overly optimistic.

For example, Gary Wagner, professor of economics at the University of Louisiana at Lafayette, said it's unlikely Louisiana would grow faster than the national average over the next two years.

"The economic underpinning all of the potential projects and their associated employment are very tenuous right now,” Dismukes said.

Dismukes noted that Europe is on the edge of a recession while growth in Asia is slowing and there are continued crises situations across the Middle East. Beyond that, U.S.-China trade relations are tense.

“Many of these large energy infrastructure projects in south Louisiana have experienced local road blocks and have seen development costs exceed original projections,” Dismukes said. “We’ll be lucky to see relatively flat employment over the next two years."

The long-term outlook for Louisiana’s energy industry is still solid but there are some uncertainties right now especially in the global market that trickle down to the state level.

"We still have a number of supply boats parked at Port Fourchon, we are not at all bullish about shallow water oil production," said Eric Smith, associate director of the Tulane Energy Institute in New Orleans.

It's likely that the first round of liquefied natural gas projects could complete construction, but the second round may not make it as more countries prepare to export LNG themselves, especially in Africa.

To meet industrial sector demand, more than 6,000 construction industry workers — from boilermakers to pipe fitters — are expected to be needed by second-quarter next year and grow to 7,000 workers by second-quarter 2021, according to estimates from the Greater Baton Rouge Industry Alliance.

Some unexpected events included layoffs, such as the Georgia Pacific plant shutting down its consumer paper division, Thompson Pipe Group relocating its Zachary facility to Texas and call centers closing.

Here's how other metro areas stack up:

NEW ORLEANS: The Crescent City is anticipated to add 9,400 jobs in 2020, up 1.6%, and another 10,100 jobs by 2021, or 1.7%. Most of that growth is tied to parishes surrounding the city, where there are plans for major industrial plants, LNG export terminals and a liquids terminal. Since 2012, about $57 billion of industrial development has been announced and only $14 billion of work has been completed. More than $20 million in liquified natural gas projects including two from Venture Global and the third from Point LNG are expected in the pipeline. Formosa Plastics will decide in 2021 about its $9.4 billion for a new ethane cracker plant. One project that might not be built is the Wanhua Chemicals proposed $1.25 billion polyurethanes plant in St. James Parish, since the company discovered tariffs against Chinese goods would roughly double the construction cost.

LAFAYETTE: The Acadiana economy appears to have hit a turning point in the recovery from years of record-low oil prices, adding jobs last year and this year. In 2020, Lafayette is projected to add 3,200 new jobs, or 1.6%, and another 4,000 jobs, or 1.9%, in 2021. Most of that bullish forecast hinges on a stronger oil and gas industry because about 6.2% of all jobs in Lafayette are directly tied to oil exploration compared to 1.8% as the state average. Scott predicts that the offshore oil rig count will grow to between 33 and 35 in the next two years. Beyond oil and gas, home health service company LHC has been on an acquisition spree and acquired a dozen of its competitors nationally in the past year. Technology company CGI already has about 400 employees in the region and expects to double that 2020. Chart Industries already won a contract to build cold boxes for Driftwood LNG and Venture Global LNG — as a result it expects to have 350 workers by the end of this year and add up to 600 in the future.

LAKE CHARLES: The petrochemical industry continues to drive much of the economy in the Lake Charles metro area and a recent lull between construction projects is expected to end next year. There are $57 billion in projects planned for the Lake Charles metro area. This year, Venture Global LNG made a decision to move forward on its $5.8 billion Calcasieu Pass LNG export terminal. Lake Charles is projected to add another 3,000 jobs by 2020, up 2.5%, and another 3,800 jobs, or 3.1%, in 2021.

HOUMA-THIBODAUX: The Houma metro area is closely tied to the oil and gas exploration industry and is particularly sensitive to activities in the Gulf of Mexico. About 7.2% of the jobs in the local metro area were in the oil and gas extraction sector this year, including shipbuilding businesses that build supply boats to service oil rigs. The Houma region is expected to add 1,500 jobs in 2020, up 1.8%, and another 3,000 jobs, or 3.5%, by 2021. That growth hinges on an increase in the oil rigs in the Gulf of Mexico.

HAMMOND: Major employers in the region include North Oaks Medical Center, Southeastern Louisiana University and the government. North Oaks had been losing money for several years but broke even in fiscal 2018 after some state aid. Enrollment at the university has not been growing either. The local metro area is expected to add only 100 jobs in 2020 and another 100 jobs in 2021 for a growth rate of 0.02% for the next two years.

SHREVEPORT-BOSSIER: The Shreveport-Bossier metro area has been losing jobs since 2008, but the “slide will end” and the region is expected to add 300 jobs in 2020, up 0.02%, and another 300 jobs in 2021. The recovery is led by new activity at the Port of Shreveport-Bossier and the General Dynamics Cyber Innovation Center, but also a small boost from expansion in the Haynesville Shale, which supplies natural gas feedstock to chemical and LNG export facilities.

MONROE: The Monroe metro area is expected to add 200 jobs by 2020, up 0.03%, and another 200 jobs by 2021. Those modest gains are expected to be driven by Vantage Health Plan's growth and stable employers like IBM, Chase Mortgage Processing and Graphics Packaging. CenturyLink has also committed to keeping its headquarters in Monroe until 2025, which adds stability to the region.

ALEXANDRIA: The Alexandria area is expected to stay stable but will remain flat for the next two years. If a new client at the old International Paper site is secured, it could create jobs in the region. Major employers are P&G, Crest Industries, Union Tank Car, Cleco and England Airpark.

Louisiana economy well-positioned in 2019, but faces several of these headwinds

Despite headwinds like trade wars, a tight labor market and volatile commodity prices, Louisiana’s economy is poised to continue growing in 20…

After a brief cooling-off period, Baton Rouge’s economy should experience a “renewed growth spurt” over the next two years on the backs of ind…

Our Views: Growth in industry good for Baton Rouge area

When you are at the center of one of the world’s great petrochemical centers, there are always going to be benefits and liabilities. Obviously…