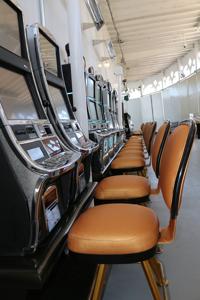 Hollywood Casino Baton Rouge has opened a 352-square-foot covered designated area for smokers, with 15 slot machines, fans and lighting, to comply with an East Baton Rouge Parish ban on smoking inside casinos. The smoking ban will go into effect June 1.

Hollywood Casino Baton Rouge has opened a 352-square-foot covered designated area for smokers, with 15 slot machines, fans and lighting, to comply with an East Baton Rouge Parish ban on smoking inside casinos. The smoking ban will go into effect June 1.

East Baton Rouge Parish’s ban on smoking in casinos takes effect in less than two weeks, and one local riverboat already is prepared with a small gambling area set aside for smokers and another boat opening a non-game smoking area terrace.

“We wanted to make sure everything was operational in advance of the smoking ban,” he said. Mollura said opening the smoking area represented a “six-figure investment."

L’Auberge Baton Rouge isn’t opening a special gambling area for smokers. Instead by June 1, the casino will open an outdoor smoking terrace set up so that guests won’t have to show their identification every time they return from leaving the casino for a cigarette, General Manager Mickey Parenton said in a statement.

Gov. John Bel Edwards is expected to sign a bill approved by the Legislature earlier this week that will allow riverboat casinos to move onto land. Parenton said L’Auberge is waiting to see what happens with that bill before it decides to do anything about opening up a smoking area with gambling.

Officials with the Belle of Baton Rouge declined to comment on how they are preparing for the smoking ban.

At Hollywood, its smoking area will be fully serviced by casino staff, including cocktail waitresses, housekeeping and security, so gamblers will be able to enjoy all the amenities of the casino while they smoke and gamble, Mollura said.

Because the casino recently brought in some new slot machines and moved things around, Mollura said Hollywood was able to set up a smoking area without taking games off the casino floor.

After June 1, that will be the only area in Hollywood where customers will be able to smoke. Hollywood will monitor the popularity of the games in the smoking area and determine if they need to add machines or expand the area, Mollura said.

When the Metro Council was considering a smoking ban in bars and casinos in summer 2017, the casino industry lobbied against the measure. Wade Duty, executive director of the Louisiana Casino Association, warned that local gambling halls stood to lose 10 to 15 percent of their revenue and the job force that goes along with it if a smoking ban was instituted.

Metro Council passes smoking ban in bars and casinos, but it won't take effect until June

Harrah’s New Orleans said in spring 2017 that revenue at its Canal Street casino went down $70 million in the two years since that city’s smoking ban took effect. Anti-smoking advocates called that accusation baseless and noted New Orleans casino revenue had been trending downward for a decade from increased competition from other gambling venues. To keep people from leaving slot machines or table games to puff on a cigarette, Harrah’s opened multiple smoking courtyards.