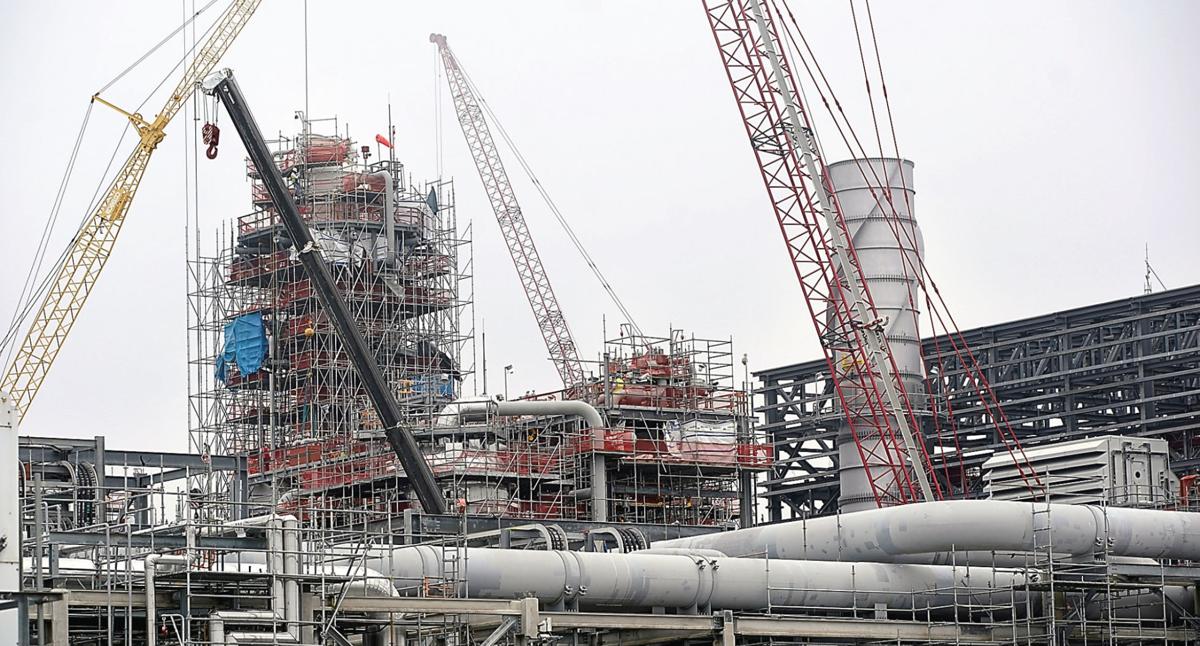 Sempra Energy's Cameron LNG facility in Hackberry shipped its first product earlier this year from Phase 1 of an LNG export project where two additional units are under construction.. 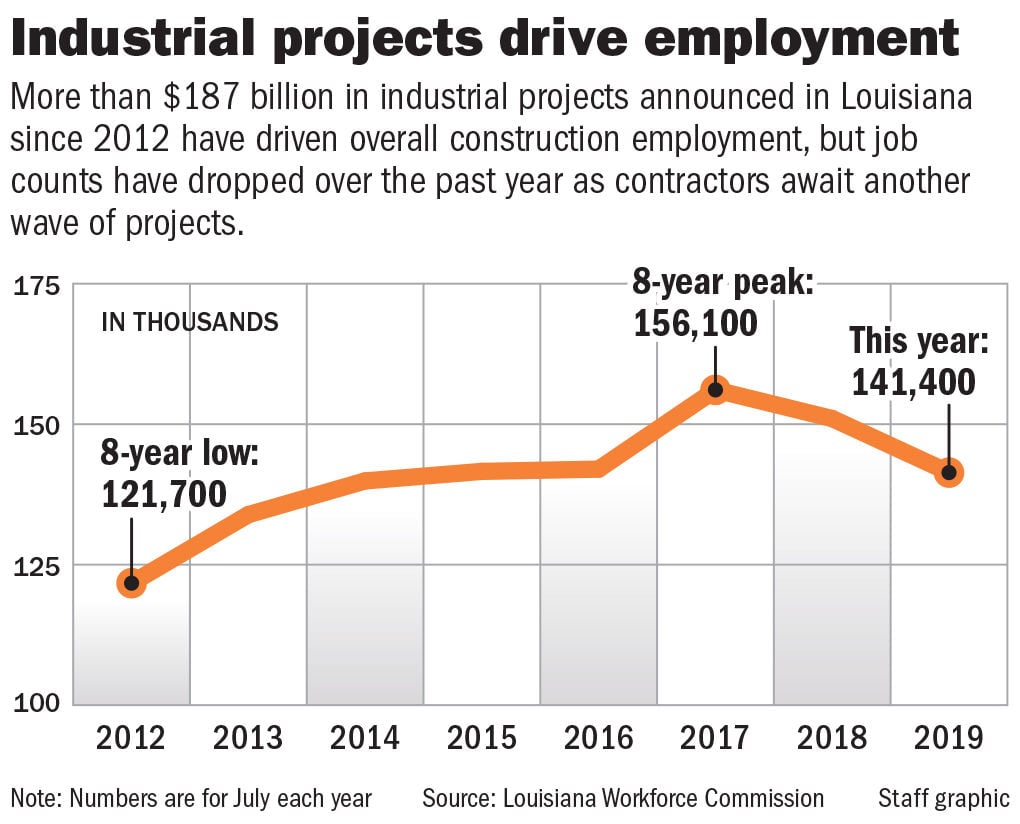 Sempra Energy's Cameron LNG facility in Hackberry shipped its first product earlier this year from Phase 1 of an LNG export project where two additional units are under construction..

Over the past year there’s been a lull in new industrial construction coming off a huge surge in activity from previous years, but contractors are hopeful that more projects gearing up to break ground will come through in the coming months.

“Many of these projects were announced years ago, the biggest concern is that we really haven’t seen the next wave,” said David Helveston, CEO of the Pelican Chapter of Associated Builders and Contractors. “I have some members who are concerned about the business climate to encourage these major industrial projects. Where is the next five years of work?”

More than $187.9 billion in industrial construction projects have been announced in Louisiana since 2012, based on figures tracked by economist and consultant Loren Scott. Work has not yet started on $114.9 billion in projects, he said recently, giving hope to contractors and construction workers.

Contractors also have noted there is work to be tapped in Texas, going through its own, similar wave of industrial projects fueled by low-priced, abundant natural gas that is used as a raw material and fuel in petrochemical production and can be exported.

The lull between projects in Louisiana is dragging down employment figures. Construction jobs stood at 141,400 in July. That's down 34,400 from the 156,100 jobs recorded for July 2017 as the wave peaked but still well above the 121,700 jobs posted in July 2012 as the industrial announcements started.

Baton Rouge has been hit even harder. For the past three months, it has had the most construction job losses of any metro area in the country, according to a national survey by the Associated General Contractors of America. In July, there were 4,900 fewer construction jobs than the year before, a 9% drop.

Several major plants that had been driving employment in the state started production this year, such as the $12.9 billion Sasol chemical plant in Lake Charles, which broke ground in 2015, and the $3 billion Lotte Chemical plant, which began construction in 2016, also in Lake Charles.

Among those on the horizon are the $9.4 billion Formosa Plastics plant in St. James Parish and a $332 million expansion by Formosa in Baton Rouge; a $1.4 billion Methanex methanol plant in Geismar; a $119 million retrofit at Dow's Plaquemine plant to increase production capacity; and a $250 million Linde hydrogen plant in Convent.

A $1.2 billion Wanhua Chemical plant in Convent, which has faced opposition in St. James Parish, is being reevaluated in terms of location and its size, based on construction cost increases that the company has attributed in part to the tariff war between the U.S. and China. The impact of the trade dispute also has been a concern for state and other officials worried about future construction and costs of other plants.

Others on the horizon include tens of billions of planned and proposed liquefied natural gas export facilities along Louisiana's coast, where big-dollar projects already have been built, and others are underway in southeast Texas.

Based on what they see, local plant managers still expect steady growth in Louisiana.

Industrial plant managers surveyed across 30 sites around the Baton Rouge metro area were optimistic that there will be a slight uptick in economic activity in the next six months, according to the third-quarter survey by the Greater Baton Rouge Industry Alliance, a trade organization that represents about 60 manufacturers. The survey participants included petrochemical, paper, pharmaceutical and industrial manufacturers addressing capital expenditure and employment plans over the next six months.

That bodes well for contractors who rely on plants to keep expanding.

For example, during construction of the Sasol chemical plants in southwest Louisiana, the company spent $4.3 billion with companies in Louisiana out of $12.9 billion total.

Sasol contracted with Baton Rouge-based Turner Industries for some of that work.

“We have had a focus on the Sasol project in Lake Charles over the past few years and are seeing that work grow under our contract,” said Stephen Toups, president of Turner Industries.

The company also has been wrapping up work on the $717 million Shell plant expansions in Geismar. Shell is also planning another $1.2 billion expansion, but won’t decide until 2020 on the investment. Turner also is working on the new ExxonMobil polypropylene expansion in north Baton Rouge, which is worth about $500 million in capital investment.

“We have seen thousands of people working on these sites and learning new skills,” Toups said. “We have had our resources focused on those sites rather than the LNG’s,” he said, referencing big liquefied natural gas export facilities being built along Louisiana's coast.

Turner Industries had worked previously on Trunkline LNG facility upgrades several years ago, which was a $500 million project. Turner most recently was tapped to work on a project in Gregory, Texas. That project is the Gulf Coast Growth Ventures' monoethylene glycol and polyethylene project, expected to cost $7.3 billion and open in 2022, which is a joint venture between Saudi Arabia's SABIC and ExxonMobil.

Sasol also contracted with Howell Industries, which is based in Sulphur. The company is a custom machining and metal fabrication business that sells services to the petrochemical and LNG industry along the Gulf Coast.

“We are now seeing and expect to continue seeing a gradual increase in work as each of the new and expanded facilities are brought online,” said Doug Landry, CEO of Howell Industries.

Some of the liquefied natural gas export facilities have invested in local subcontracts, such as Cheniere Energy’s Sabine Pass, which spent $773 million out of the $18 billion project with Louisiana companies.

In the next few years, there are several new LNG export facilities expected to begin construction, which may lead to more subcontracting work for Louisiana businesses.

Venture Global LNG made a final investment decision last month to build an LNG export facility about 50 miles south of Lake Charles after the Arlington, Virginia-based company closed on its round of financing. The Calcasieu Pass project is expected to cost $4.25 billion and create 130 jobs in addition to 1,500 temporary construction jobs. The LNG facility is expected to start commercial operations by 2022. By 2024, the company expects to have two other LNG export facilities in Louisiana: Plaquemines LNG, expected to cost $8.5 billion, create 250 jobs and support about 2,200 construction workers, and Delta LNG.

Houston-based Commonwealth LNG last month filed a formal application with the Federal Energy Regulatory Commission for permits to build an LNG export facility on nearly 400 acres in Cameron Parish, and is expected to make a final investment decision on the project by the end of 2020. The project is expected to cost $4 billion and would support about 2,000 construction jobs.

Sempra Energy's Cameron LNG facility in Hackberry shipped its first product earlier this year from Phase 1 of an LNG export project, which includes three liquefaction units, and is a $10 billion facility. Phase 1 is one of five LNG export projects Sempra Energy has proposed in North America: Cameron LNG Phase 2 in Hackberry, previously authorized by regulators, encompasses up to two additional liquefaction units and up to two additional LNG storage tanks; Port Arthur LNG in Texas; and Energía Costa Azul LNG Phase 1 and Phase 2 in Mexico.

The Greater Baton Rouge Industry Alliance, which includes contractors, meets regularly to discuss the construction market and some members recently said there's been more work in Texas than Louisiana this year.

Exxon is spending $2 billion to expand its Baytown plant and dropping another $10 billion for an ethylene cracker in Corpus Christi. A $1.9 billion steel mill was considered in Louisiana, but Steel Dynamics ultimately chose a site near Corpus Christi.

But there's still plenty of work to be done in Louisiana, if companies follow through on their announcements.

"There are some who think there is some pull back from companies waiting on the election this fall," said Connie Fabre, executive director of the Greater Baton Rouge Industry Alliance. "We had pretty resounding feedback from contractors, who have said that we're doing lots of work in Texas as things have been a little slower here but overall things are still strong."