Cameron LNG has asked federal regulators for a six-year extension to complete the construction of a proposed expansion at its Hackberry liquefied natural gas export terminal in southwest Louisiana.

Jaime Gray, project director of Cameron LNG at Sempra LNG, which is a partner in the facility, penned a letter to the Federal Energy Regulatory Commission this month requesting the extension of the company's existing permits slated to expire in May.

Cameron LNG has been considering adding two natural gas liquefaction units at the Hackberry site, where supercooled LNG is sent on tanker ships around the world to customers.

The company already secured permits for units four and five from FERC, dating back to 2016. If the extension is granted and construction proceeds, that expansion would add 515 billion cubic feet per year of LNG exports for the company.

Cameron LNG has U.S. headquarters in Houston and is jointly owned by affiliates of Sempra LNG, Total, Mitsui & Co. Ltd. and Japan LNG Investment LLC, which is a partnership between Mitsubishi Corp. and Nippon Yusen Kabushiki Kaisha.

The group expects a final investment decision to happen by second-quarter 2021. The expansion is expected to take nearly 5 years to complete. 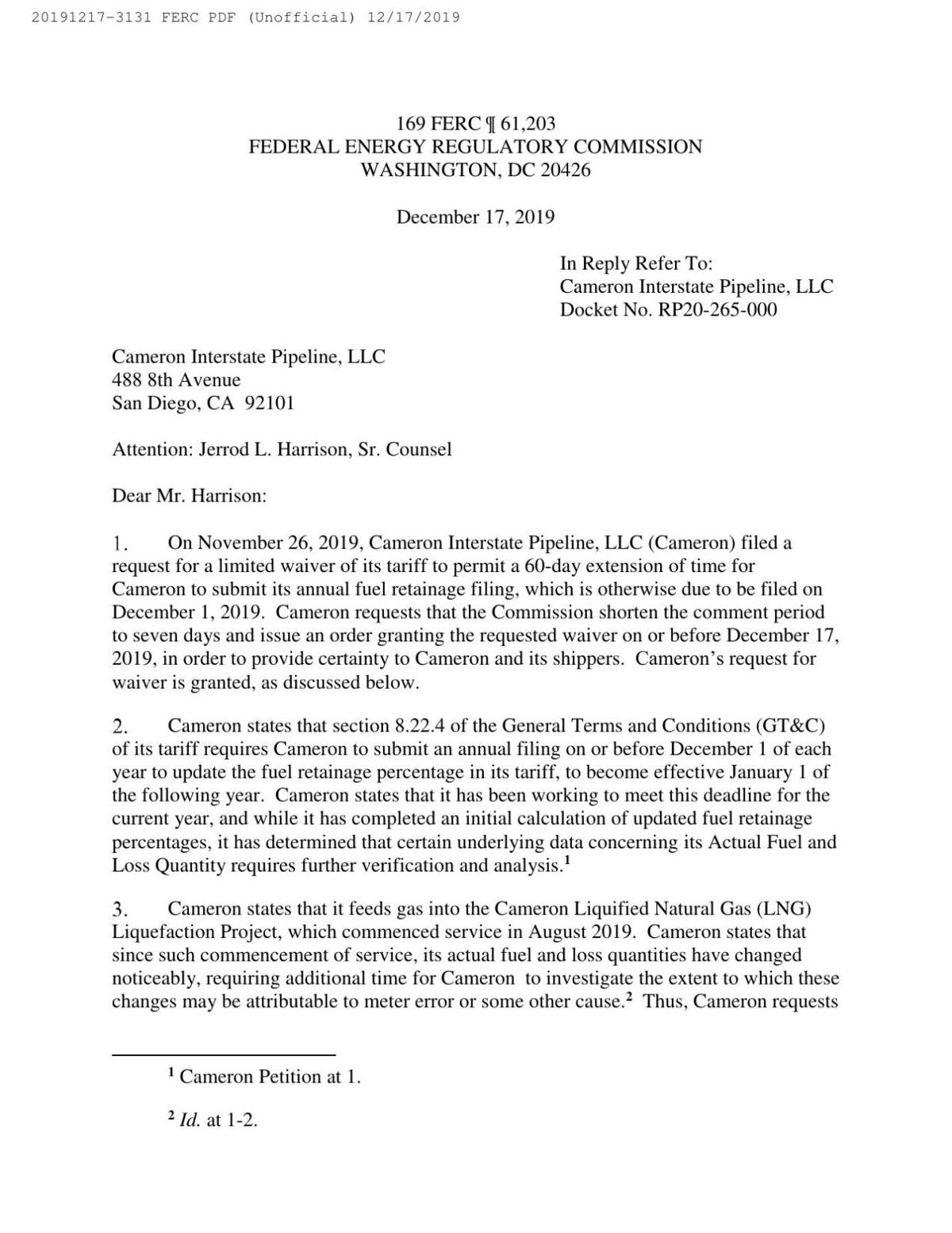 Cameron LNG already has spent $50 million on the expansion project, which includes financing, permitting, engineering work and site preparation, according to the letter. In addition, the company said that it has already obtained all local permits to begin construction.

Not all of Cameron LNG's joint-venture owners agreed on the expansion project, which resulted in the buyout of a partner that had opposed it.

In July 2018, Total, an investor in Cameron LNG, acquired the equity stake of Engie, another joint-venture partner in the LNG project. By November 2018, Total and Sempra Energy signed a memorandum of understanding about a framework to find a way to make the expansion project happen.

In October 2019, Sempra signed another memorandum with Mitsui & Co. with similar terms.

"Granting the requested extension of time will enable Cameron LNG and the (joint-venture) partners to complete all the necessary commercial arrangements to commence construction," Gray said in the letter.

Houston-based McDermott International Inc. — a company with historical ties to New Orleans and Baton Rouge — said Tuesday it was submitting a …

Houston-based Cameron LNG's export facility in southwest Louisiana, which failed to report a liquefied natural gas leak just one day after it …

Avec Bacon Café will close it doors Sunday, the owner announced this morning.

Check out the top 10 foods ordered for delivery on Super Bowl Sunday, according to Waitr

Super Bowl Sunday ranks as one of the top five delivery days for Waitr, the restaurant delivery company, each year.

Stephen Bartley with Bartley & Co. Financial was elected president for the next two years of the Greater Southwest Louisiana Black Chamber…

When we see local musicians and bands on stage, we may think they lead the life of Riley. And, no, not Steve Riley, for those unfamiliar with …

Our Views: Louisiana has a great boom in natural gas, but it's still subject to markets

Once upon a time, all of five years or so ago, there was hand-wringing about the proposed — and vast — expansion of American exports of liquef…