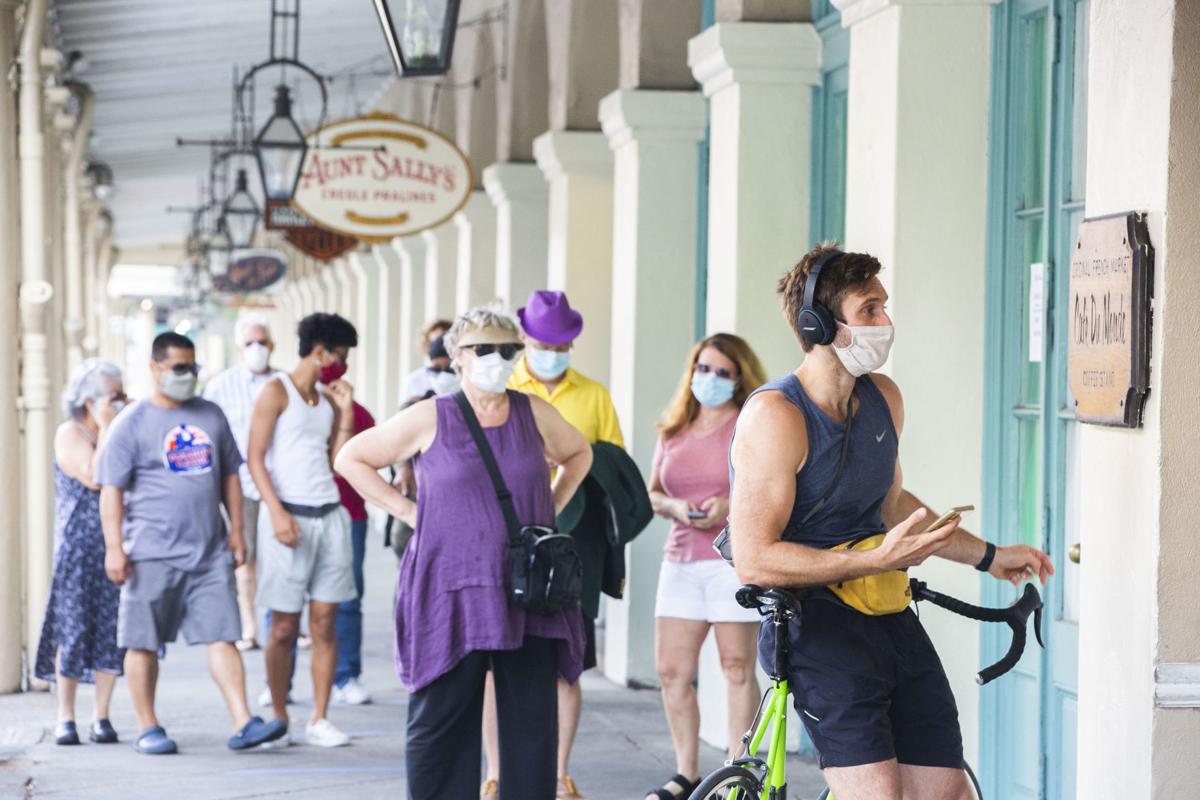 Customers wait for Cafe Du Monde to reopen May 22 in the French Quarter after the coronavirus shutdown in New Orleans. With businesses across the state trying to rebound from shutdowns, the number of jobless claims in Louisiana had trailed down two weeks ago but registered an uptick last week. 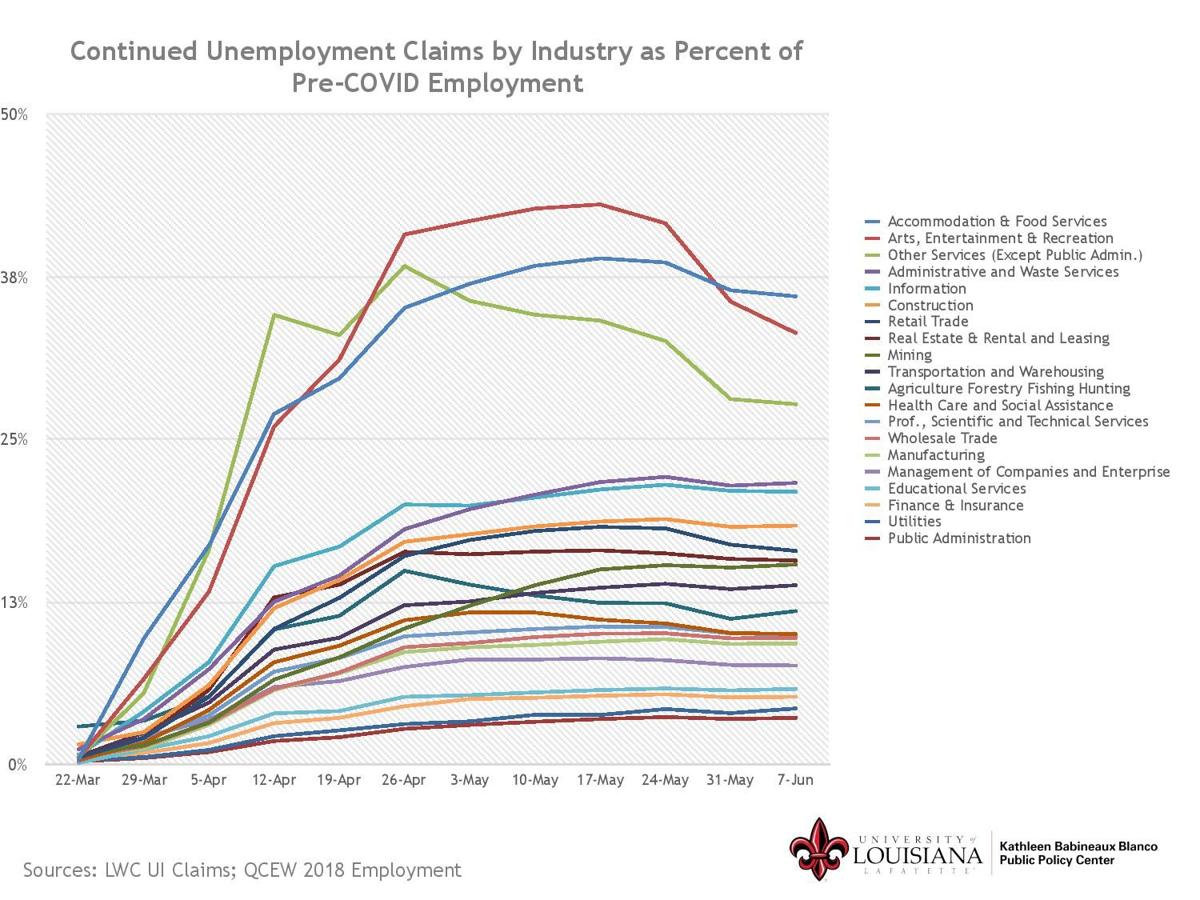 Each industry sector's continued unemployment is compared to the percentage of the labor force it employed in 2018 before the recession. 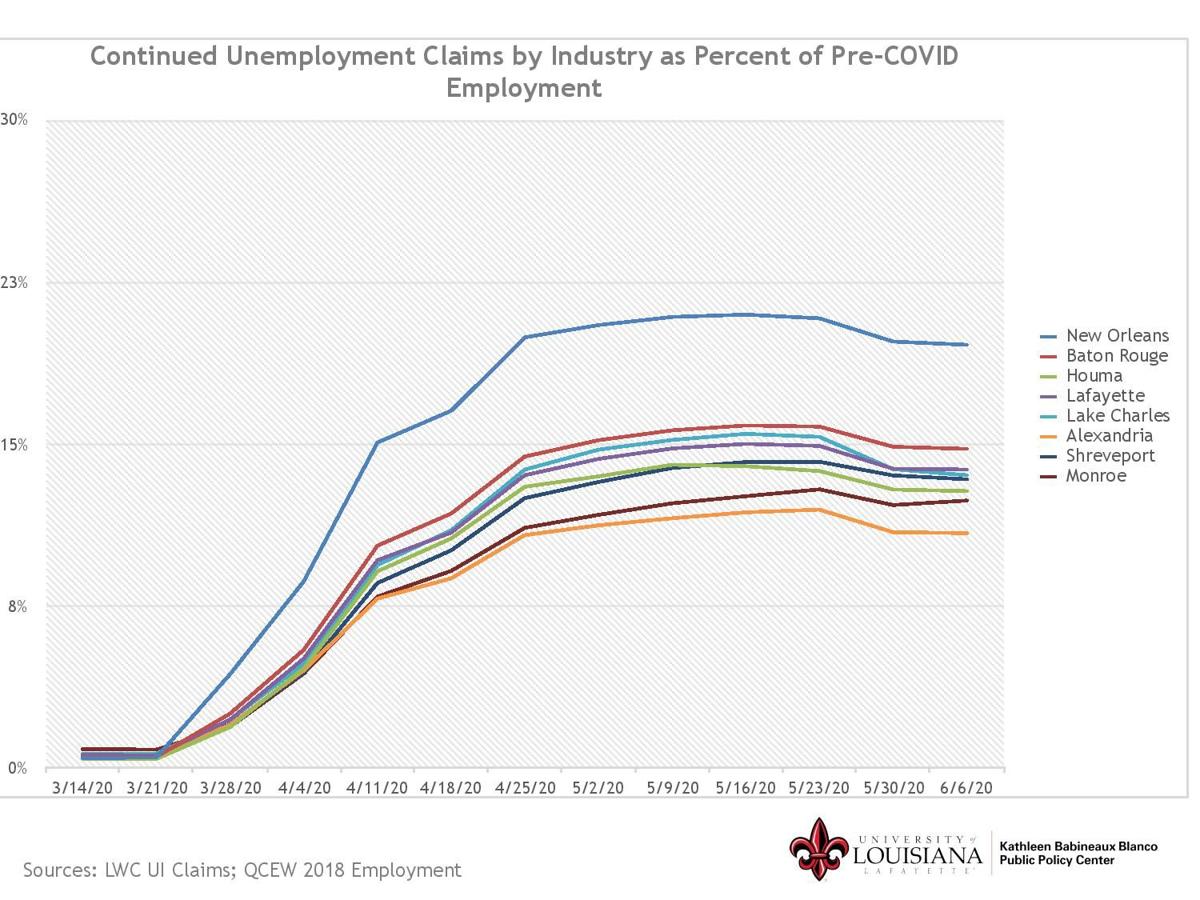 Each region's continued unemployment is compared to the percentage of the labor force it employed in 2018 before the recession.

Customers wait for Cafe Du Monde to reopen May 22 in the French Quarter after the coronavirus shutdown in New Orleans. With businesses across the state trying to rebound from shutdowns, the number of jobless claims in Louisiana had trailed down two weeks ago but registered an uptick last week.

Each industry sector's continued unemployment is compared to the percentage of the labor force it employed in 2018 before the recession.

Each region's continued unemployment is compared to the percentage of the labor force it employed in 2018 before the recession.

New unemployment claims and the number of those still out of work in Louisiana reversed course and increased last week after declining since the phased reopening of the economy started in mid-May.

Economists expected unemployment claims would continue to shrink as the state's stay-at-home order was lifted and took a downward turn two weeks ago.

Existing unemployment claims increased as well to 305,083 last week from 301,598 the week before.

That could mean it's still quite a long road to recovery for the state economy or is just a blip in the downward trend or possibly a market response to federal changes to the Paycheck Protection Program, said Steven Sheffrin, executive director of the Murphy Institute and professor at Tulane University.

"Employers may have reassessed how long (the recession) is going to last," Sheffrin said.

For example, in New Orleans several hotel chains decided to permanently lay off workers they had temporarily furloughed, putting thousands of employees out of work while the hotels wait for tourists to return.

In some ways, markets like New Orleans are limited in how much of the economy can recover until visitors start booking domestic and international flights.

"Right now, there's a floor about how good the recovery might be until (tourism and flights) get worked out a little bit," Sheffrin said.

Even so, there's likely going to be a major reallocation of jobs as many might not come back in the economic recovery or workers potentially move out of state to find work.

Another factor could be that when Congress reduced the amount businesses must use on payroll compared to rent and other costs for federal Paycheck Protection Program loans to be forgivable, some companies may have recalculated how much workforce they needed.

Also some companies that were closed may have already spent their payroll protection loans since the initial deadline was June 30 for potential forgiveness of the loan.

“As stimulus money dries up, we’ll see how quickly the real economy can catch up," said Stephen Barnes, an associate professor and director of the University of Louisiana Lafayette’s Blanco Public Policy Center Director, who has been closely tracking unemployment data.

"We'll likely see some bumps in the road as businesses have to pull back on their payroll or other expenses if their customer sales have not caught up," Barnes said.

In Louisiana, new unemployment claims for workers in food services and accommodation continue to lead statewide job losses; 3,186 new claims were filed last week. The peak for the industry was 29,000 workers for the week ending March 21 right after the stay-at-home orders were imposed and nonessential businesses closed to stem the spread of the coronavirus pandemic.

Accommodation and food services and also arts and entertainment industry jobs are likely to have the most sluggish jobs recovery, especially since both sectors rely on public gatherings, which have been a public health concern for months, Barnes said.

The state pays a maximum $247 per week for unemployment, with the federal government kicking in an additional $600 per week from a $2.2 trillion coronavirus relief package passed by Congress.

Some employers have complained that workers are less likely to return because the federal government unemployment benefit often boosts pay higher than an employee would make on the job. The law requires that if a worker is offered a job, they may not be eligible for unemployment and employers can file documentation to report the issue.

The recession in Louisiana is expected to last longer than the nation overall and unemployment isn't generally projected to drop back down to 10% until the end of 2021.

"People should think of this small step back as a yellow flag that it's going to be a long road to recovery, you can't just count down the days until everyone gets their job back," Barnes said.

Number of Louisianians on unemployment takes downward turn, though still hovering above 300,000

In Phase 2, these Louisiana businesses are reopening, but they say ‘protocols are a strain’

J.C. Penney and three other retailers at the Acadiana Mall will reopen today, a mall official said.

Three staff members of City Club at River Ranch have tested positive for the novel coronavirus.

Children's Place to close 300 stores by end of next year; Fate of Acadiana Mall store unknown

Children's clothing retailer Children's Place, which has a location in the Acadiana Mall, will close 200 stores this year and another 100 next year.

State to partner with Jeff Davis Parish officials, other on $11.6 million rice mill in Lacassine

State officials will partner with Jefferson Davis Parish leaders on a $11.6 million rice mill in Lacassine that will handle up to 25,000 bushe…

A surprising gain of 2.5 million jobs and unexpected drop in the U.S. unemployment rate for May provided a glimmer of hope that Louisiana coul…