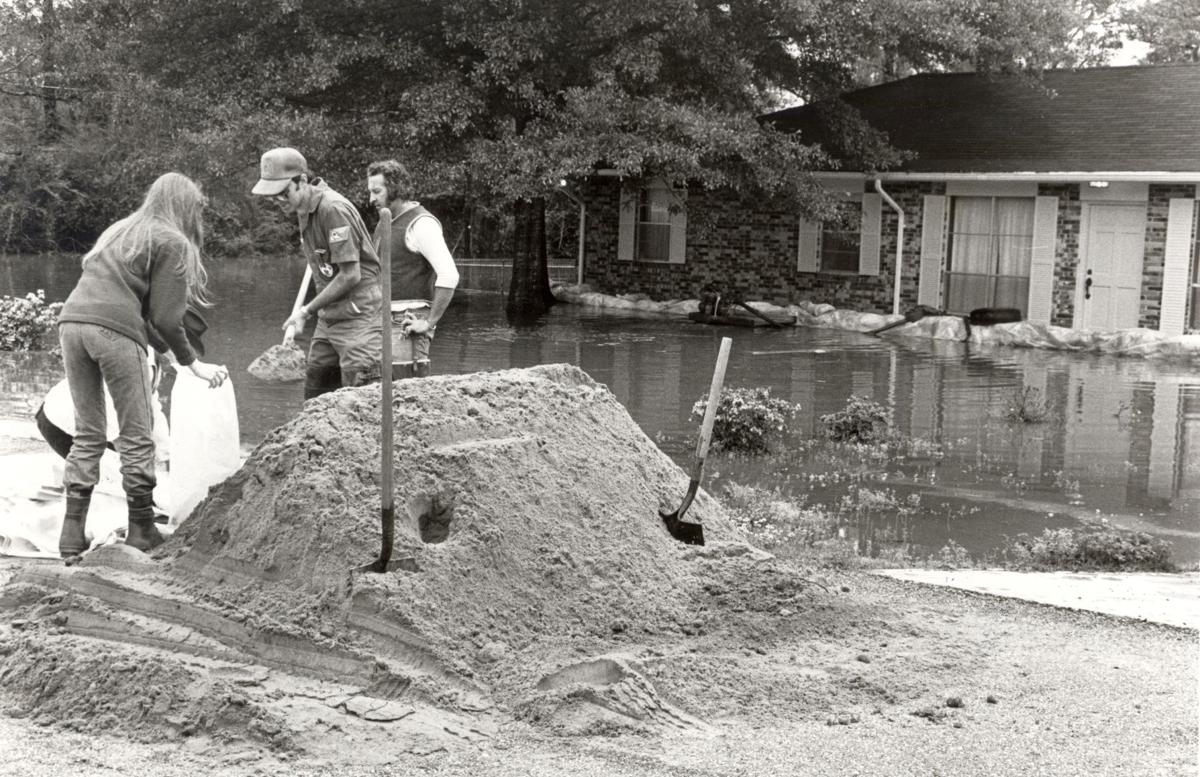 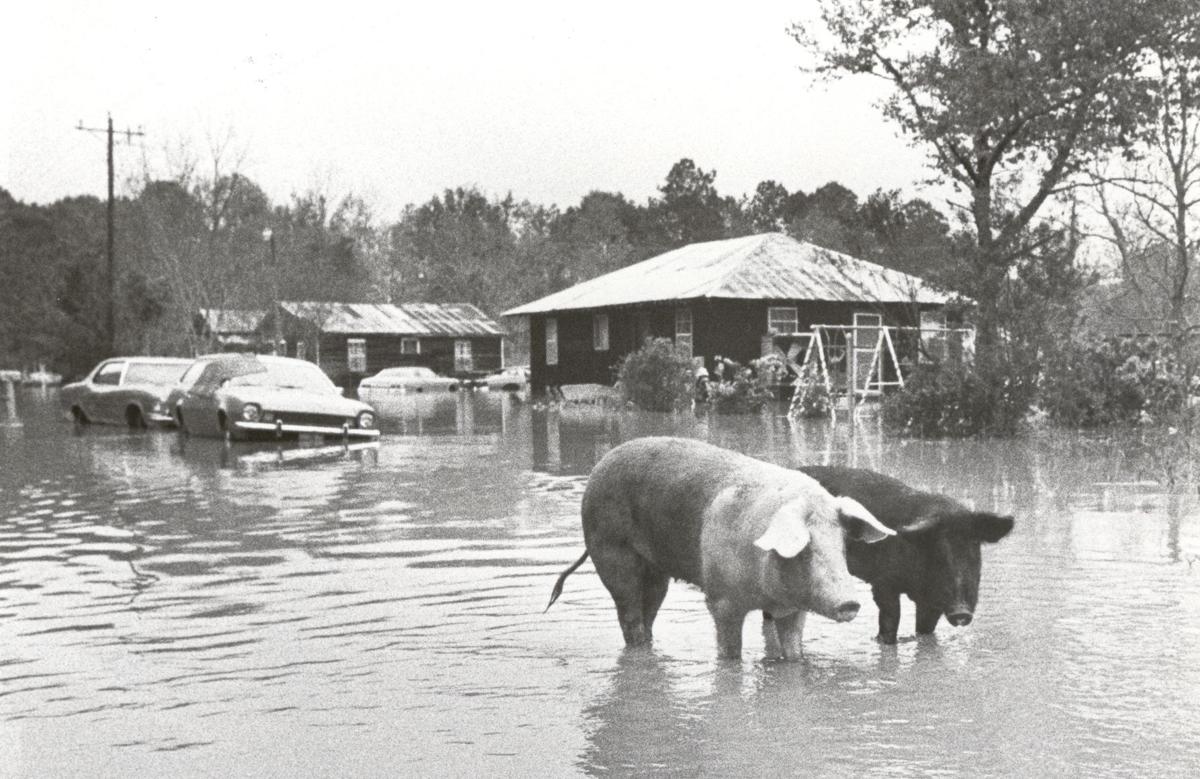 It would continue for more than 50 hours.

Residents marveled at the intensity and duration of the downpour, unaware of even heavier rain falling north of them. That water, brown and rising, was coming.

The flood on the Amite and Comite rivers would become the worst on record. In Livingston Parish, 3,025 homes and businesses would flood, as would 1,615 in Baton Rouge and 828 in Ascension.

The 1983 flood remains part of the lore among families who suffered its effects and among others who saw water stop mercifully at their doorsteps. Heavy rain still sends some of those people to check projected flood stages out of fear of another flood.

Such fears are not unfounded, officials say.

Their opinions vary on what a repeat of 1983 conditions would do, but they agree it could happen again.

A similar event could occur in the Amite River basin at any time, state climatologist Barry Keim said.

Spring is the most likely time, said Tim Erickson, an emergency response meteorologist with the National Weather Service.

At this time of the year, when temperatures across the continent are changing, it is more likely for a front to stall and drop a lot of rain, he said.

Conditions like those that produced the 1983 flood statistically can be expected about once every 75 years, but no one can predict when the next flood will occur, said Dietmar Rietschier, executive director of the Amite River Basin Commission.

Conditions that produced the 1983 flood included about 10 inches of rain in Baton Rouge and Denham Springs. Even more important, Rietschier said, was the huge amount of water traveling downstream from East Feliciana Parish, where as much as 14 inches of rain fell.

On April 7 of 1983, the Comite crested at 29.7 feet, four feet higher than ever recorded at Joor Road, causing heavy flooding along that river, which flows into the Amite.

The next day, in the Amite River, rainwater that had gathered from 1,280 square miles of river basin to the north crested at a record high of 41.5 feet at Denham Springs.

Water spread over River Road in Denham Springs and into homes and businesses as the river widened eastward to Range Avenue, which cuts through the middle of the city.

It continued south, rising inch by inch, to inundate homes and subdivisions that had never before flooded. Water reached the ceilings in some homes in Livingston and East Baton Rouge parishes and remained in some houses for days, U.S. Army Corps of Engineers records show.

“Everybody in the community was working around the clock,” Randy Clouatre said.

The Ascension Parish councilman said he stacked sandbags six high around his home and kept most of the water out.

“There was water just about everywhere,” said Dempsey Lambert, an Ascension Parish councilman from St. Amant. Lambert, who was 16 years old at the time of the flood, recalls filling sandbag after sandbag in an attempt to help neighbors.

In many places, water inched up sandbag stacks and spilled over the tops. It rose until it covered some mobile homes and climbed into the second stories of other residences.

Eventually, damage would reach $23.4 million in Ascension Parish, $65.3 million in East Baton Rouge and $83.8 million in Livingston, the final report on the flood by the corps shows.

The rain caused additional damage on other rivers, including the Tangipahoa. The river flooded hundreds of homes and businesses in the Robert area.

A group of residents in Tangipahoa Parish continues to try to collect a $91.8 million judgment plus interest from the state. A judge found the state liable, ruling that the construction of an Interstate 12 bridge caused flooding by disrupting the natural flood plain.

The I-12 problem has been addressed, said Gordon Burgess, president of Tangipahoa Parish.

Still, he, like many others interviewed, said he’s concerned that rainwater gets to rivers faster now because of additional development.

Impervious surfaces such as roads, driveways, parking lots and even roofs allow water to “flash off rather than soak into the ground,” said Mike McDaniel, an environmental consultant who has dealt with flooding problems on the Amite.

Mark Harrell, director of the Livingston Parish Office of Emergency Preparedness, said retention ponds dug to slow runoff from some developments would help, but he believes water upriver would reach the Amite River quicker and push water levels higher.

A lot of development has occurred since 1983, and “anything from Amite County, Miss., south is going to affect us,” he said.

The worst scenario combines a stalled front or an early tropical storm that dumps a lot of rain into the Amite River basin at the same time the Bonnet Carre Spillway is open, a high tide is occurring and there is a wind from the east or southeast, said Ivor van Heerden, a former deputy director of the LSU Hurricane Center who has researched storm surges and flooding in the area.

In such a case, tides and spillway flow could cause a rise in the levels of Lake Pontchartrain and Lake Maurepas, and the wind could push lake water against the mouth of the Amite River, he said.

Such a buildup of water in western Lake Maurepas doesn’t allow the river to drain as quickly, which can cause backwater flooding and floodwater to remain longer, said Katelyn Costanza, a senior hydrologist with the National Weather Service River Forecast Center.

Wind and tides on Lake Maurepas were a factor in the 1983 flood, said Eric Pittman, one of the residents who flooded on the lower part of Blood River.

The Bonnet Carre didn’t play a role in that flood because the floodway wasn’t opened that year until the following month, documents from the corps show.

David Ramirez, a corps hydraulic engineer, said opening the spillway would have an “extremely minimal impact” on water levels on the west side of Lake Maurepas.

However, he also noted that analysis by the corps does indicate “a strong east wind would cause stages near the west shore of Lake Pontchartrain to rise faster and higher than the volume of water entering the lake from the spillway.”

Ricks said he fears a re-occurrence of the events that caused the 1983 flood would cause higher water now because of upstream development and because of hurricane levees.

Ricks said it appeared after Hurricane Isaac that corps levee work hampered drainage from Lake Maurepas, which made it harder for rivers to drain into the lake.

Modeling indicates it wasn’t hurricane levees but “unique characteristics of Hurricane Isaac” that resulted in flooding on the west shore of Lake Pontchartrain, said Ricky Boyett, a spokesman for the corps.

The corps’ assessment, however, did not address communities on the west shore of Lake Maurepas, Boyett said.

Though Denham Springs Mayor Jimmy Durbin said development in the Amite and Comite river basins would result in more water reaching the rivers and doing so more rapidly, he said other construction done in recent years could help.

New bridges over the Amite River at U.S. 190 are higher than the bridges that reduced water flow in 1983 and caused water to back up to the north of the bridges, Durbin said.

“I think the flow through Denham Springs would be more open,” he said. “I can’t speak for what it would do to Port Vincent and French Settlement,” which are downstream.

Baton Rouge drainage improvements allow water from a heavy rain to get out of the city before flood water moves down the Amite River to cause backwater flooding, said Bryan Harmon, deputy director of the city-parish Department of Public Works.

It also helps downstream areas, because the Baton Rouge water and the upstream water don’t hit them at the same time, he said.

Canals have been cleared and improved, and bridges over a number of them have been raised to help pass the flows, Harmon said.

In Ascension Parish, several projects should protect many people from a flood similar to the one in 1983, said Bill Roux, the parish’s drainage director.

The 1983 flood spurred passage of a sales tax to improve flood protection, he said.

The Henderson Bayou Floodgate, which will protect against backwater, should be finished next spring, after which approximately 65 to 70 percent of parish residents who flooded in 1983 should be protected from a similar flood, Roux said.

Future improvements are planned to extend the Laurel Ridge levee and to increase flood protection at Frog Bayou and Bluff Swamp, he said.

In Tangipahoa Parish, numerous drainage improvements have been made, Burgess said.

The Tangipahoa Parish president also said the 1983 flood “blew out a bridge” on La. 16, but state officials now have more and better equipment for dealing with debris that lodges on the upriver side of bridges.

He and other officials across the flooded area said the 1983 flood also brought stricter regulations on how high new structures must be built.

“Our building standards have improved,” Foster said. “Our flood plain regulations have been strengthened.”

Since 1984, buildings in Denham Springs have been constructed at or above base-flood elevation, which means they should be above a 100-year flood, Foster said.

Baton Rouge made major revisions to its flood plain regulations in 1990, Harmon said.

All building permits require structures to be built above record inundations and federal flood map standards, he said.

The flood map height standards in Baton Rouge have been increased several times since 1983, Harmon said.

“Building requirements today, as related to the flood plain, have much higher standards,” he said.

Harrell said some homes that repeatedly flood in Livingston Parish have been bought or raised, but there’s not enough federal money available to deal with all the homes that fit that category.

The 1983 flood brought proposals to build two major flood-reduction projects: the Darlington Reservoir and the Comite River Diversion Canal. They were designed to work together, but the reservoir hit political snags and wasn’t funded, said Rietschier, who oversees the ongoing Comite project.

That $198 million project to divert floodwater from the Comite River to the Mississippi River probably would pay for itself in one flood such as that of 1983, he said.

That diversion is designed to reduce 100-year flood peaks by 0.8 foot at Port Vincent and 1.2 feet at Denham Springs on the Amite River. On the Comite River, it should reduce water levels 3.8 feet at Greenwell Springs, 4.9 feet at Hooper Road and 5.5 feet at White Bayou, Rietschier said.

Because of funding problems, often at the federal level, the project has fallen behind schedule and isn’t expected to be completed until 2021. It will take longer than that if the federal funding doesn’t come through as expected, Rietschier said.

The project is funded through the corps, with a local match paid by a property tax on landowners in the floodway. Federal funding varies depending on nationwide requests, Rietschier said.

Each additional year that passes increases the chances the area will endure another 1983-type flood without benefit of the project, he said.

Falcolm Hull, who was chief of project management for the corps in New Orleans, helped plan projects to reduce flooding after the 1983 flood.

Some of the projects are complete and will help, he said.

However, like many others interviewed, Hull said that if the area were hit by a rain like the one in 1983, he suspects river “peaks would be higher” and damage would be greater because of heavy development.

Another such flood will come, Hull said.

“You know it’s going to happen again,” he said. “It’s just a matter of time.”