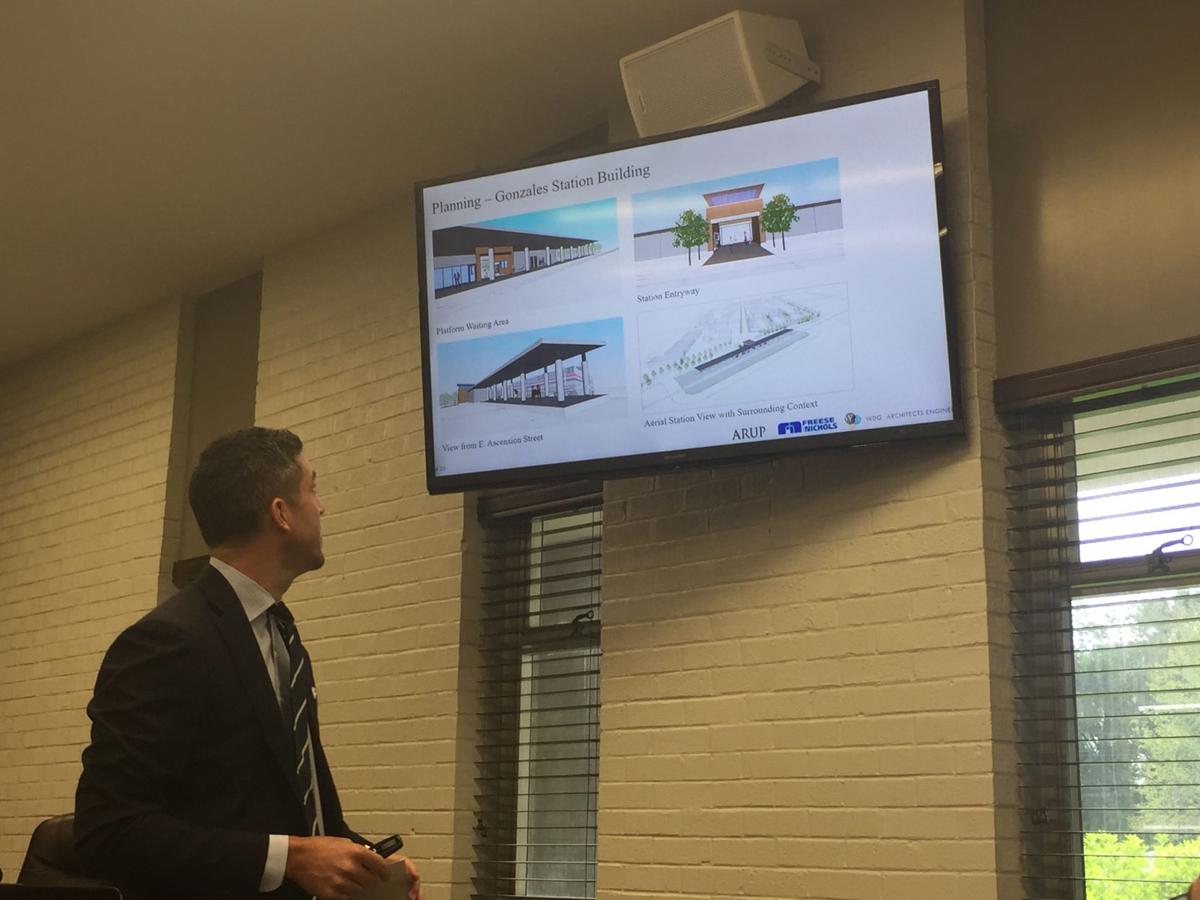 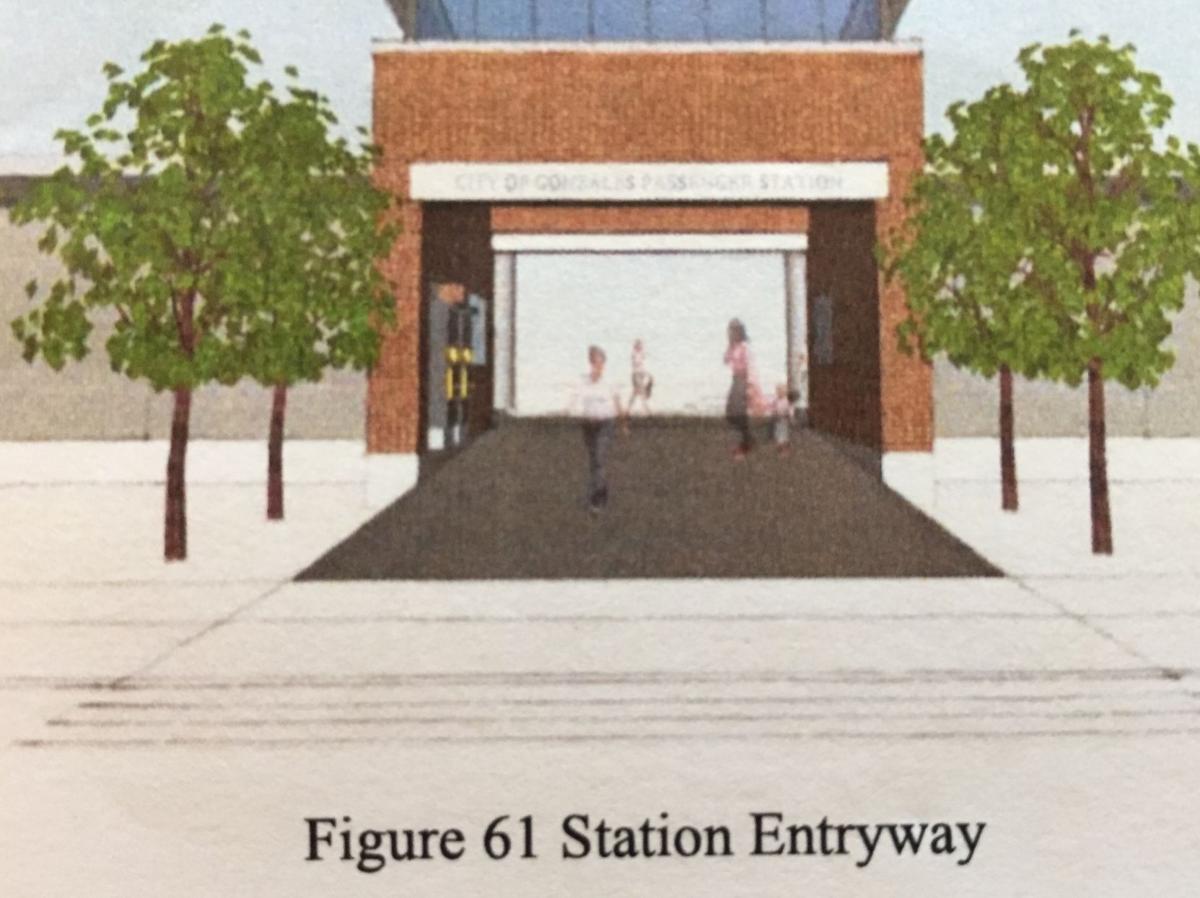 Provided sketch -- A master plan developed by the Arup firm for the city of Gonzales shows the entry way of a proposed train depot. 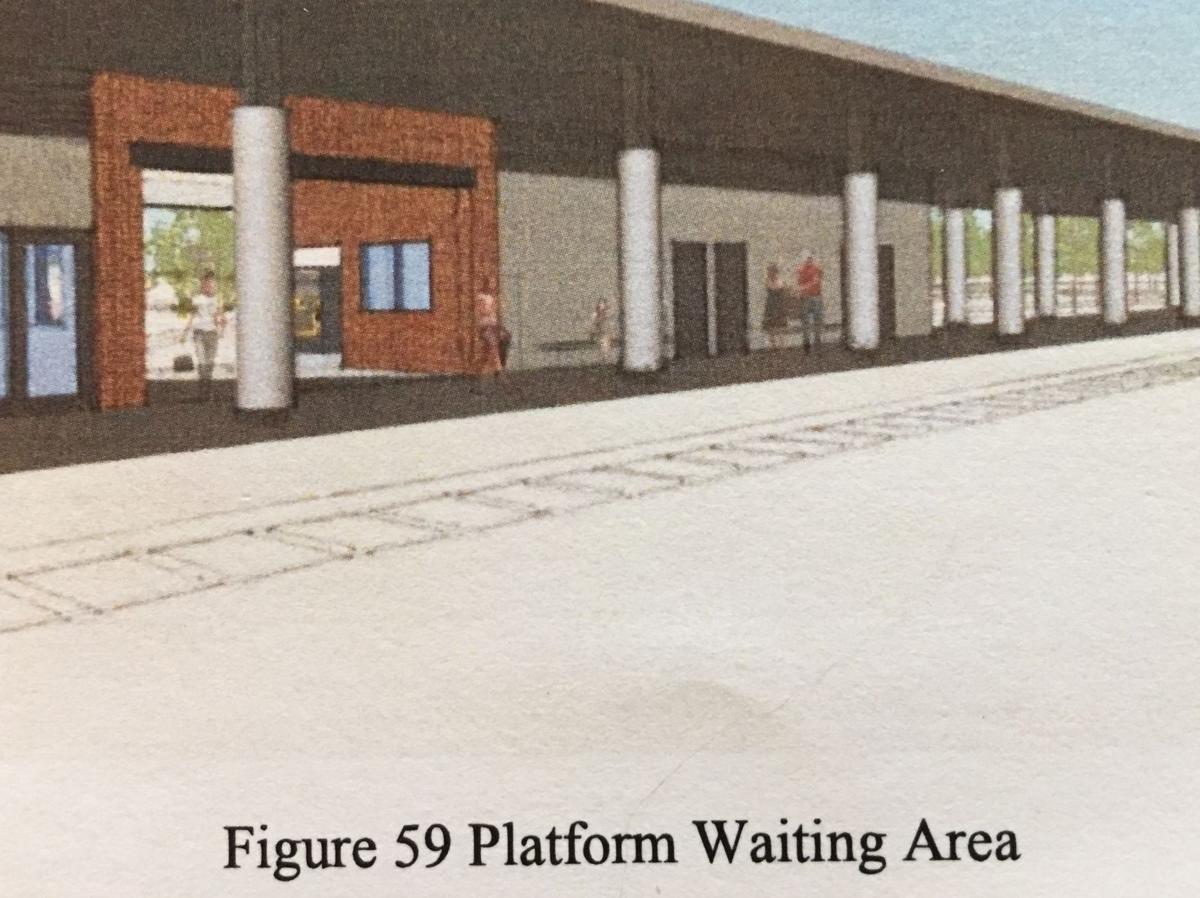 Sketch provided - A train station in Gonzales, as envisioned here by a consulting firm, would bring new life to downtown, planners say.

Provided sketch -- A master plan developed by the Arup firm for the city of Gonzales shows the entry way of a proposed train depot.

Sketch provided - A train station in Gonzales, as envisioned here by a consulting firm, would bring new life to downtown, planners say.

GONZALES — A passenger train traveling between Baton Rouge and New Orleans would be a convenient, hassle-free and low-cost way to connect workers with jobs, tourists with destinations and airports and sports fans with Tiger Stadium and the Mercedez-Benz Superdome, supporters say.

One place to catch a ride will be in Gonzales, if the commuter rail comes to pass, and on Wednesday, a master plan envisioned for the train depot was unveiled for the public.

“The plan helps us to make decisions proactively,” Gonzales Mayor Barney Arceneaux said at the event at City Hall. “If you don’t do anything, you get nothing.”

John Spain, chairman of the Southern Rail Commission, told audience members that the dream of the commuter line is getting closer to becoming reality.

In a meeting with Gov. John Bel Edwards in late August, the Southern Rail Commission learned of the possibility of $300 million in federal funding for the passenger line, Spain said.

“We’re closer to making this happen than we’ve been in 10 years,” Spain said.

The 80-mile commuter line would have the potential to build an economic “super region,” said Ryan Burns, senior rail systems engineer with the Houston office of the Arup Firm, the lead firm on the creation of the master plan design for the Gonzales train station.

Also part of the design team were WDG Architects Engineers of New Orleans, along with Fort Worth-based Freese and Nichols, which has offices in Baton Rouge and New Orleans.

The train station in Gonzales would front East Ascension Street in the oldest part of the city.

The station would feature a 300-foot-long, open air platform, with an enclosed passenger waiting area and, possibly, a public plaza.

GONZALES — If commuter rail service is developed between Baton Rouge and New Orleans, Gonzales wants to be ready.

The $100,000 cost of the master plan was split 50/50 by the city of Gonzales and the Federal Railroad Administration, through a grant awarded by the Southern Rail Commission.

The plan details the depot facility itself, parking and signage and how drivers, pedestrians and bicyclists would get to the station.

The Arup firm estimates the cost of the platform and station at $5.8 million. Gonzales Mayor Barney Arceneaux has said the city is looking into the possibility of grants to help with the cost.

The 70-page master plan also includes a menu of 23 stand-alone, possible improvements that could be made in the vicinity of the station with the “ultimate goal of a vibrant, walkable, connected neighborhood which serves as a transit entry point to Gonzales and as a focal point for community and public programming.”

One suggestion is the creation of a park or retail/restaurant development between the station and nearby New River.

It’s estimated that, initially, some 10,000 people would be getting on the train at Gonzales every year, Burns said.

The train would be traveling at 79 mph in the first years, a speed that’s anticipated to increase to 110 mph, as more passengers begin to travel by rail.

“We hope as we get more travelers, we would be able to improve the tracks so we can increase the speed,” Spain said.

A one-way ride on the commuter line would cost $10, he said.

Officials said they hope  the number of stops would increase over time, making travel by train even easier to access. The train would make a three-to-five minute stop at each station.

In response to a question from the crowd about the safety of the commuter line, Gonzales City Engineer Jackie Baumann said that the warning systems for the commuter line would be required to meet federal guidelines.

GONZALES — Despite a blowing warning horn, a freight train moving at 47 mph crashed early Friday into a garbage truck that was making its morn…

On Aug. 24, there was a fatal train crash in Gonzales, near where the new train station would be built. A freight train going 47 mph crashed into a garbage truck traveling across a crossing that morning, which had the common “X” shaped signs that mark a railroad crossing, as well as a stop sign and a yield sign.

The driver of the truck, Willie Hall, of Baker, was declared dead at the scene.

The estimated $260 million cost of the commuter lines would include repairs, improvements and safety features.

'I warn all my customers': Amid Baton Rouge-New Orleans rail planning, safety a big debate

GONZALES — Darlene Wax, owner of Ratcliff's Florist in Gonzales, says she tells departing customers to take care before they cross the Kansas …