Technicians give tests as Fred's Bar in Tigerland hosts a drive-thru coronavirus testing site for college students and staff who work at nearby bars Thursday June 25, 2020, in Baton Rouge, La. 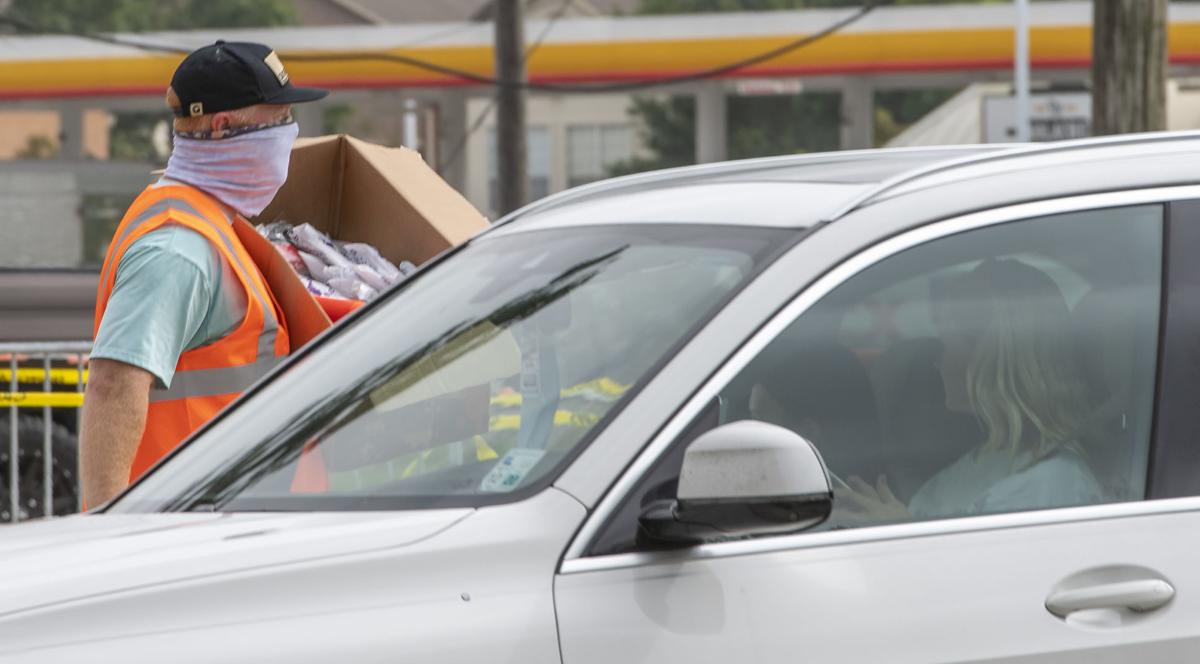 Masks are distributed to vehicle occupants who need them as Fred's Bar in Tigerland hosts a drive-thru coronavirus testing site for college students and staff who work at nearby bars Thursday June 25, 2020, in Baton Rouge, La.

Technicians give tests as Fred's Bar in Tigerland hosts a drive-thru coronavirus testing site for college students and staff who work at nearby bars Thursday June 25, 2020, in Baton Rouge, La.

Masks are distributed to vehicle occupants who need them as Fred's Bar in Tigerland hosts a drive-thru coronavirus testing site for college students and staff who work at nearby bars Thursday June 25, 2020, in Baton Rouge, La.

Federal and state health officials plan a broad new push to test as many as 5,000 people per day in the Baton Rouge region for the novel coronavirus after many of the gains made against this virus this spring have been lost, the governor said Wednesday.

Saying the Baton Rouge region was becoming “a hotspot again” for the virus, Gov. John Bel Edwards said the capital area is among the reasons the state has drawn close attention from the White House and will become one of three areas in the nation to receive the federal help to supplement testing efforts.

Edwards said it was the rising rate of positive cases per test, often known as “positivity,” that prompted Dr. Deborah Birx to call him Tuesday to discuss the new testing plan in cooperation with the White House Coronavirus Task Force and other federal agencies.

In the drive to reopen Louisiana, the state and an array of medical providers have been on a push over past several weeks to increase testing …

Testing is expected to start Tuesday at LSU, Southern University, Cortana Mall and the Greater Baton Rouge State Fairgrounds, but the governor acknowledged the 5,000-per-day clip isn’t likely to be met initially.

Even before the new testing initiative, signs have emerged that some commercial testing labs, which handle the vast majority of the state’s testing, were already struggling to meet increasing testing demand and return results in a timely fashion.

Quest Diagnostics, one of the major labs processing tests in Louisiana and elsewhere in the country, announced Wednesday that testing demand had increased by 50% in the past three weeks and that the average turnaround time for tests is more than three days.

The announcement comes a day after state and local officials said test processing from free, community drive-thru sites this month in West Feliciana Parish had also run into demand-related problems and delayed the notification of results.

Quest was processing the tests in that parish and at similar joint drive-thru sites in the region coordinated through individual parishes, the Louisiana Army National Guard and the state Department of Health, state health officials said.

In the first months of the novel coronavirus outbreak, Livingston Parish seemed to have been spared the worst and has remained firmly behind s…

Separately, some parents of LSU students have complained to The Advocate about the slow turnaround time from a free community testing effort on last Thursday at the Tigerland bars after state health officials had identified an outbreak among the popular college neighborhood's bars.

An executive with Relief Telemed, the Baton Rouge company that coordinated that testing effort, said tests are taking five to seven days to return due to increased demand. The tests were being processed by a Lafayette lab that isn't Quest.

In a statement Wednesday, the state health department said it has been in constant contact with "commercial testing labs across the state about a variety of topics that include testing result turnaround times."

State health officials also indicated the delays were not limited to Quest.

When asked how testing turnaround times would be affected by the significant increase in volume from the new federal effort, Kevin Litten, health department spokesman, said the agency is working on the details ahead of the July 7 launch.

Testing numbers have steadily risen in the state and the Baton Rouge region since late April. In the capital area, test numbers are approaching minimum daily benchmarks that health researchers at Harvard University had suggested would be a measure of viral spread.

But what Edwards and the White House are proposing at 5,000 tests per day will be a quantum leap compared to current levels.

Quest said Wednesday it has been moving to boost capacity. Earlier this month, it started recalling employees furloughed in April and restored hours and pay cuts to begin meeting increased demand.

Quest attributed its delays in processing tests to a number of factors, including increased spread of the virus; demand from healthcare centers, nursing homes and prisons; and orders from drive- or walk-thru testing sites.

"Despite the rapid expansion of our testing capacity, demand for testing has been growing faster," the company said.

The company added that, even with the slowdowns, turnaround time for priority patients remains one day.

Vishal Vasanji, co-founder and chief executive officer of Relief Telemed, which coordinated testing in Tigerland, said he has also spoken to an executive running urgent care clinics in the region who doesn't use his lab or Quest but also had slowing test turnaround times.

That suggested to Vasanji, he said, that the delays are not limited to one or two labs.

A lengthy line grew outside of Fred's bar in Tigerland on Thursday as people waited to be tested for coronavirus.

He added that people may have unrealistic expectations because of quicker turnaround times on completed tests when demand wasn't as high earlier in the pandemic.

"It's the nature of the industry," Vasanji said. "I'm not going to knock people because people are expecting things, you know, right away, but it's just people's expectations and they don't want to wait."

About 350 people were tested in the Tigerland effort, Vasanji said.

West Feliciana Parish government officials issued their own apology Tuesday about the delayed test results in their parish. They said they began working on resolving the problem as soon as they found out but also added that delays were due to "several factors … out of our control."

In East Baton Rouge Parish, the average weekly rate of positives per test has quadrupled over the past two weeks, rising from 2.5% to 10.3% between the week ending June 21 and the one ending Sunday, an Advocate analysis of state data shows.

Through the first three days of this week, the positivity rate in the parish is 8.4%. The parish has had close to 1,000 new cases in the past 11 days, including 227 on Wednesday, Mayor-President Sharon Weston Broome said.

In Louisiana, positive tests for coronavirus have been found in all 64 parishes, according to the Louisiana Department of Health.

Louisiana small businesses can start applying for up to $15,000 grants each on July 28, Treasurer John Schroder announced Wednesday, after he …