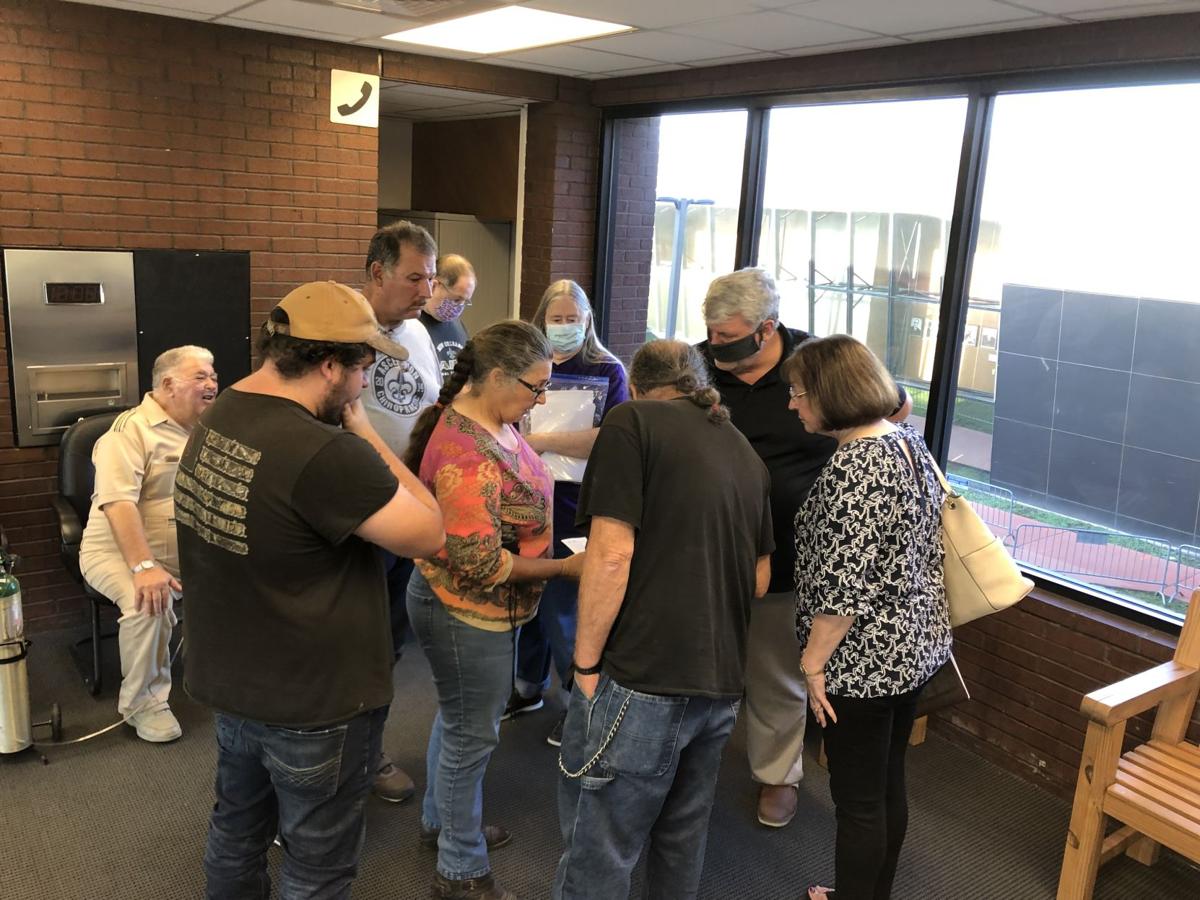 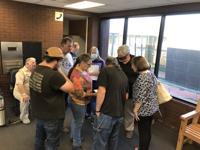 Developer Chris Ingram, far right in crowd with mask and silver hair, reviews on Wednesday, June 10, 2020, his plans for Hidden Lakes subdivision in the Lake area of Ascension Parish with neighbors who opposed it. The Planning Commission had approved the project minutes earlier at the Parish Courthouse Annex in Gonzales. 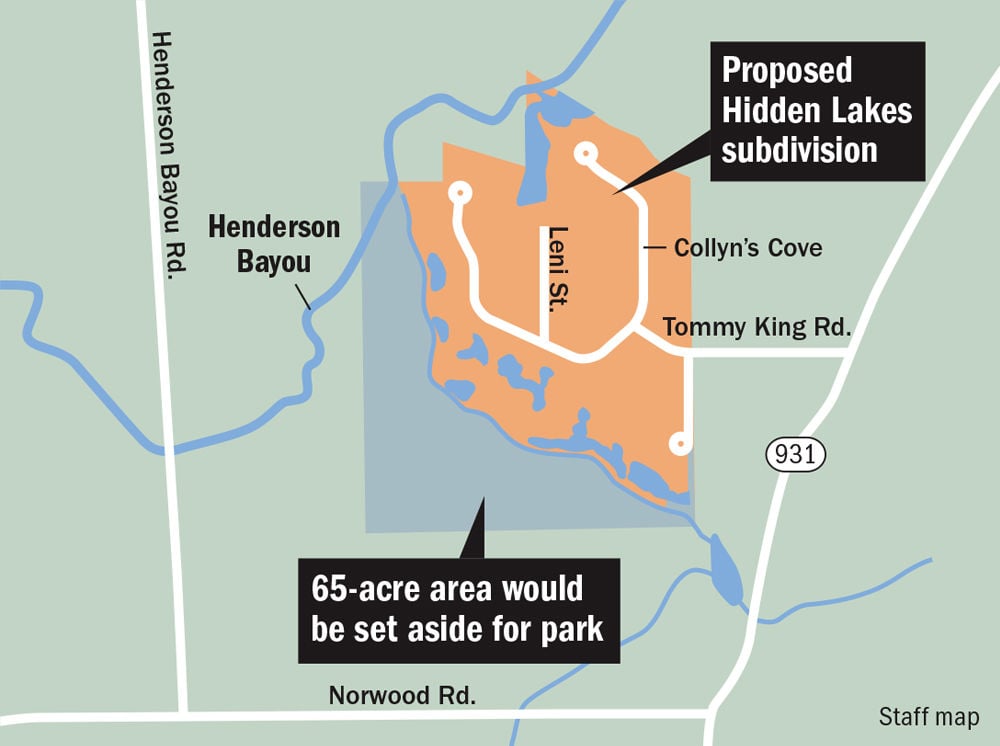 GONZALES — Susan and Richard Jordan have lived on family property off La. 931 in the Lake area of eastern Ascension Parish for 39 years. In August 2016, they avoided flooding by just inches.

The couple, who live on land that Susan's family homesteaded in the 1800s, said that during the great flood, water several feet deep flowed behind their home and across their road. The Amite River backwater flooding had overtopped parish levee systems and pushed up Henderson Bayou.

"We saw the water rushing across there," Susan Jordan said.

The Jordans and several of their neighbors who did flood in 2016 showed up before the parish Planning Commission this week to make the kind of case that had become a regular occurrence in the first year or so after the great flood: opposition to new housing in low-lying areas that flooded severely nearly four years ago.

Ascension planning commissioner argues for end of appeals board: 'It stinks...of corruption'

In 2017 and 2018, public uproar over new housing was followed by a slowdown in new projects, new limits in how much dirt builders can use to raise property so it is less susceptible to flooding and new home elevation requirements.

On Wednesday, the project the Jordans and their neighbors fought, the 89-home Hidden Lakes neighborhood, sailed through the commission without opposition. The development will sit on 188 acres of pasture, woods and wetlands that flooded four years ago behind the Jordans' home.

They opposed the plan over drainage concerns, traffic on narrow and winding La. 931, and the one-way entrance to the large site.

The project is the first new residential neighborhood to be approved in Ascension Parish since at least January 2019 and is the first to be approved under the parish's new rules on using dirt to elevate homes, said Jerome Fournier, parish planning and development director.

Approval of the neighborhood preliminary plat, an important early but final step toward home construction, is also the first under new Parish President Clint Cointment, who took office in January and campaigned on controlling growth.

Hidden Lakes has unique wrinkles that came after negotiations between the parish and Chris Ingram, a seasoned Ascension developer building the project.

He will donate nearly 65 acres of his site to the parish for recreational land after plans to make that land a regional floodwater storage lake were deemed not feasible. Also, in a departure from compact construction patterns in Ascension since the housing bust of the late 2000s, all of the lots in Hidden Lakes will be around an acre to as much as five acres in size, Ingram's engineer said.

DONALDSONVILLE — More than three years removed from the August 2016 flood, Ascension Parish has taken an important step to limit the potential…

The commission also agreed to allow the development to have open ditches and not have curb and gutter roads as cost-saving measures for the spread-out development.

In the wake of the 2016 flood, which inundated thousands of homes in Ascension, the dirt fill practices of developers came under harsh criticism. Longtime homeowners argued the rules for new construction were sacrificing older, lower homes for the safety of newer homes built on several feet deep of dirt that displaced floodwater.

Developers and engineers disputed these claims, saying detention ponds mitigated the impact. But former and current council members and the administration of former Parish President Kenny Matassa, who left office in early 2020, settled on a compromise.

New construction could use no more than 3 feet deep of dirt fill, but homes would have to be at least 2 feet above the predicted height of a 100-year flood, 1 foot higher than the old standard.

Though the ideas were adopted, the new fill limits and height standard prompted strong push back from the developers and Matassa for a time. They meant that, in some of Ascension's lowest areas, builders would have to find other, more costly ways to raise homes besides just dirt, such as with piers or cinder block wall foundations, known as chain walls.

The land where Hidden Lakes is planned is one of those low areas. Much of the land is below the predicted height of the 100-year flood, which is a flood that has a 1% chance of happening in any year and is a minimum benchmark for flood insurance requirements.

In an interview, Ingram explained that the first third of each lot in Hidden Lakes — extending out roughly 200 feet from the center of the road — will have dirt fill while the back two-thirds of each lot will remain at natural elevation. Wetlands will be avoided as much as possible.

Homes that need to go higher than 3 feet to meet the new elevation requirements will be built on chain walls on top of the fill. Deric Murphy, Ingram's engineer, explained to the commission that flood risk was being mitigated by the low home density, the land set aside for recreation and several detention ponds.

"This is gonna be as low impact of a development as you can probably imagine," he said.

GONZALES — A state district judge says that, for the time being, Ascension Parish cannot ban the use of dirt to raise homes and businesses whi…

In 2017, the U.S. Geological Survey reported that the August 2016 flood in that area surpassed a 500-year flood. It has a 0.2% chance of happening in any year, bigger than the 100-year flood against which minimum federal housing elevation standards are set.

When asked in a later interview, Murphy said he'd have to check closely to see if any homes in Hidden Lakes would flood if another August 2016 occurred once built to Ascension's new, higher elevation requirements.

The Jordans said the only reason they didn't flood in 2016 is they built six inches above Ascension's old elevation standards to 16.5 feet but worry what impact Hidden Lakes will have on them and their neighbors the next time the water comes up.

On Wednesday, parish officials and Ingram also cut a deal for the sewer system. Due to the large lot sizes, Ingram was not required to install a neighborhood-scale sewer system but was proposing individual treatment units for each lot, as a cost-saving measure.

Parish officials have separately been trying to consolidate Ascension's private and home treatment systems to improve water quality. In exchange for installation of a community system, which the parish will build and own through impact fees Ingram pays, he received eight more lots from the 81-lot plan he originally put forward, Fournier told the commission.

"We would like to have one discharge point (for treated wastewater) instead of 81 discharge points, so I think that's a real advantage to the parish to be able to reach that agreement" with the developer, Fournier said.

GONZALES — In a rare move, the Ascension Parish Council agreed Thursday to hire its own engineering representative to vet a possible compromis…