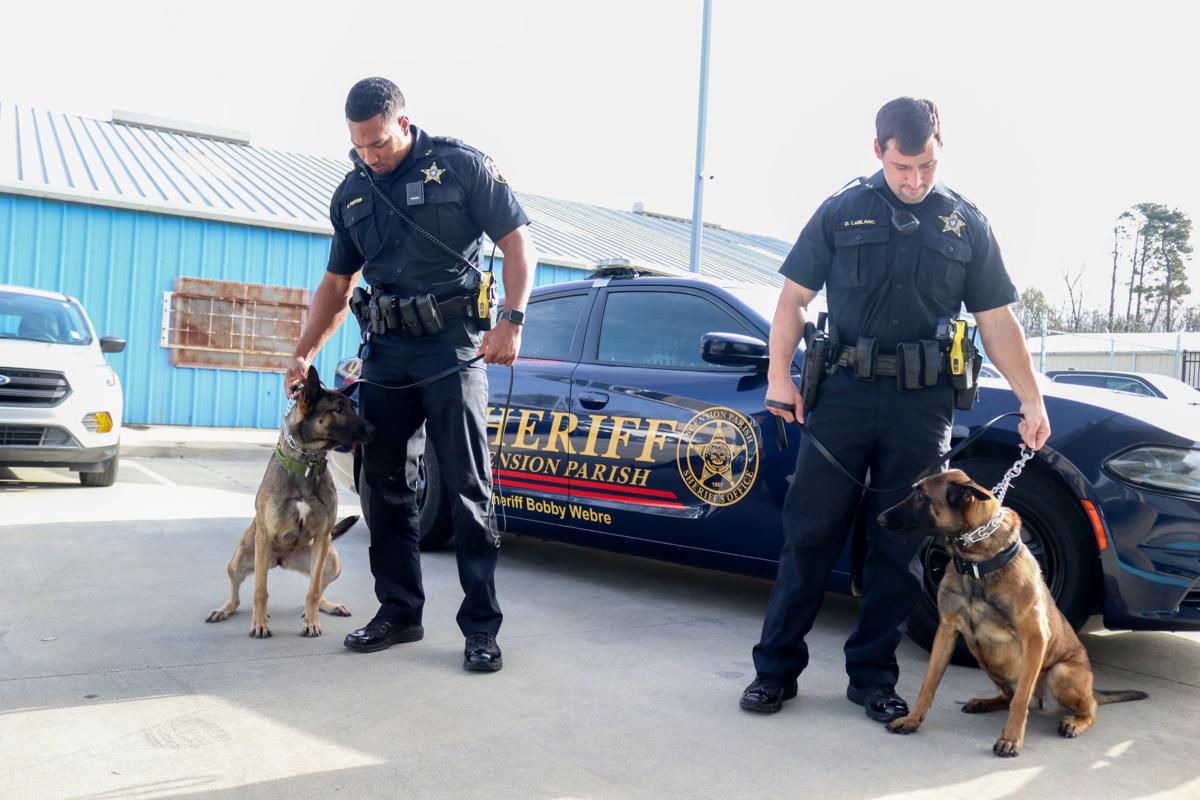 Detective Quinton Foster, left, holds his new K-9 partner Brenda with Detective Dexter LeBlanc, right, holding his new K-9 partner, Kyra. The dogs, which are specially trained to sniff out narcotics, mean a return of a K-9 program to the Ascension Parish Sheriff's Office after an absence of more than 20 years. 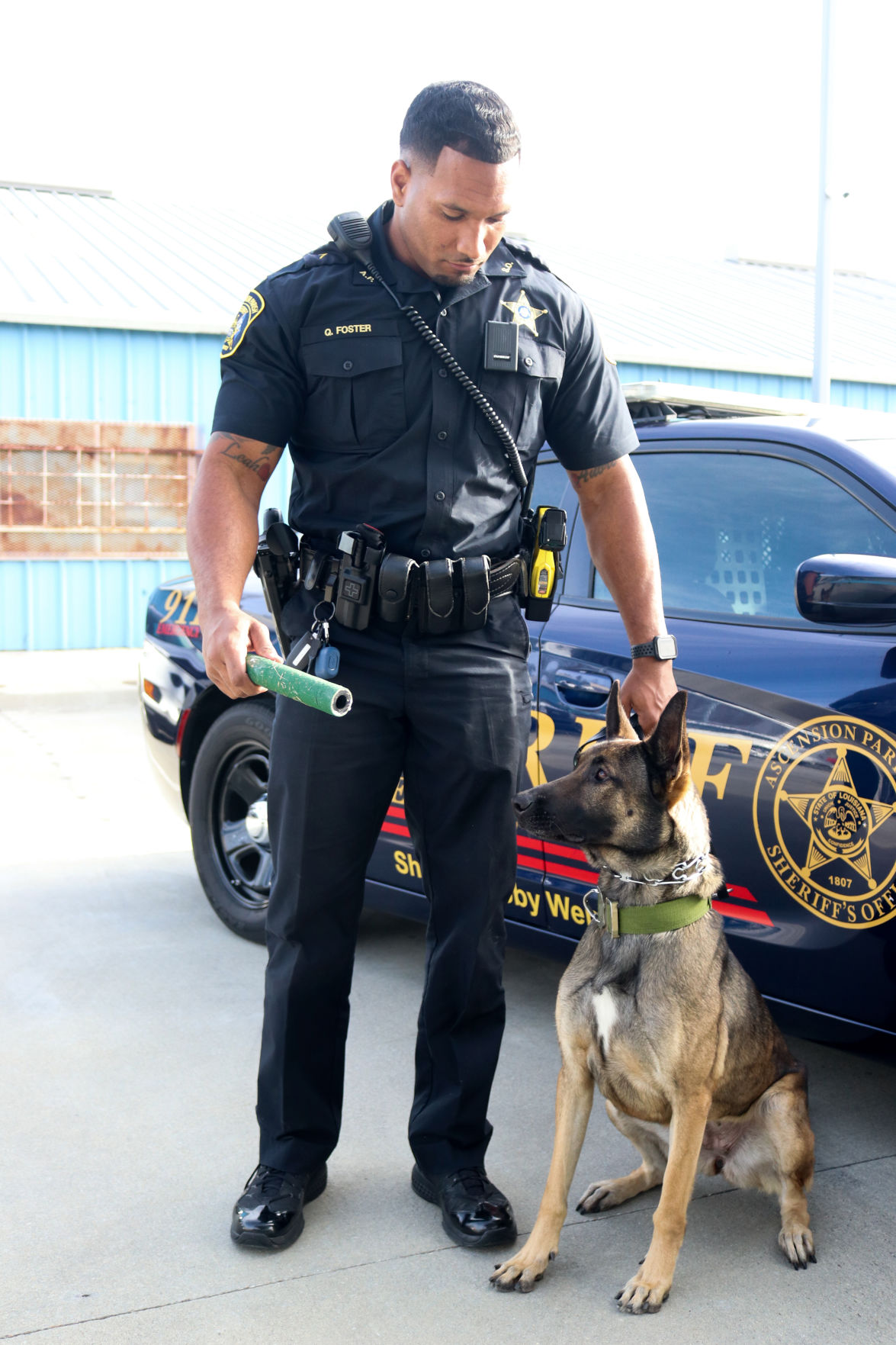 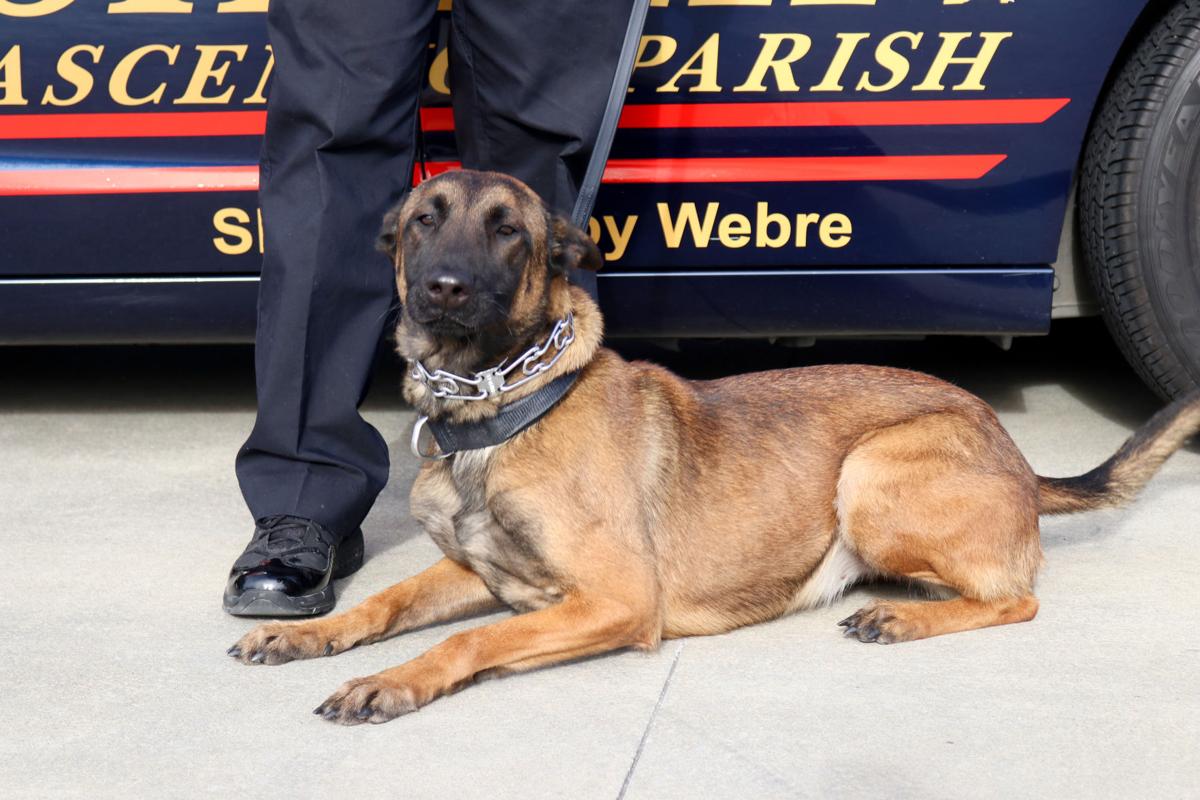 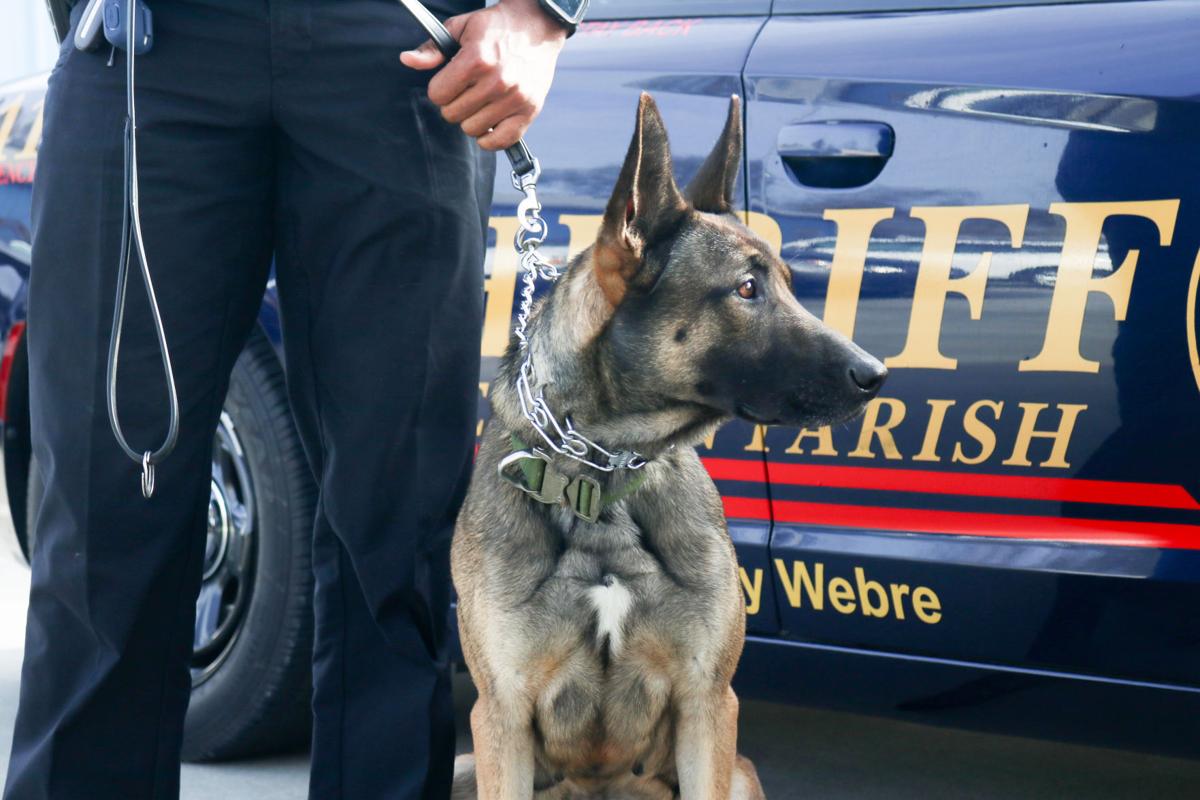 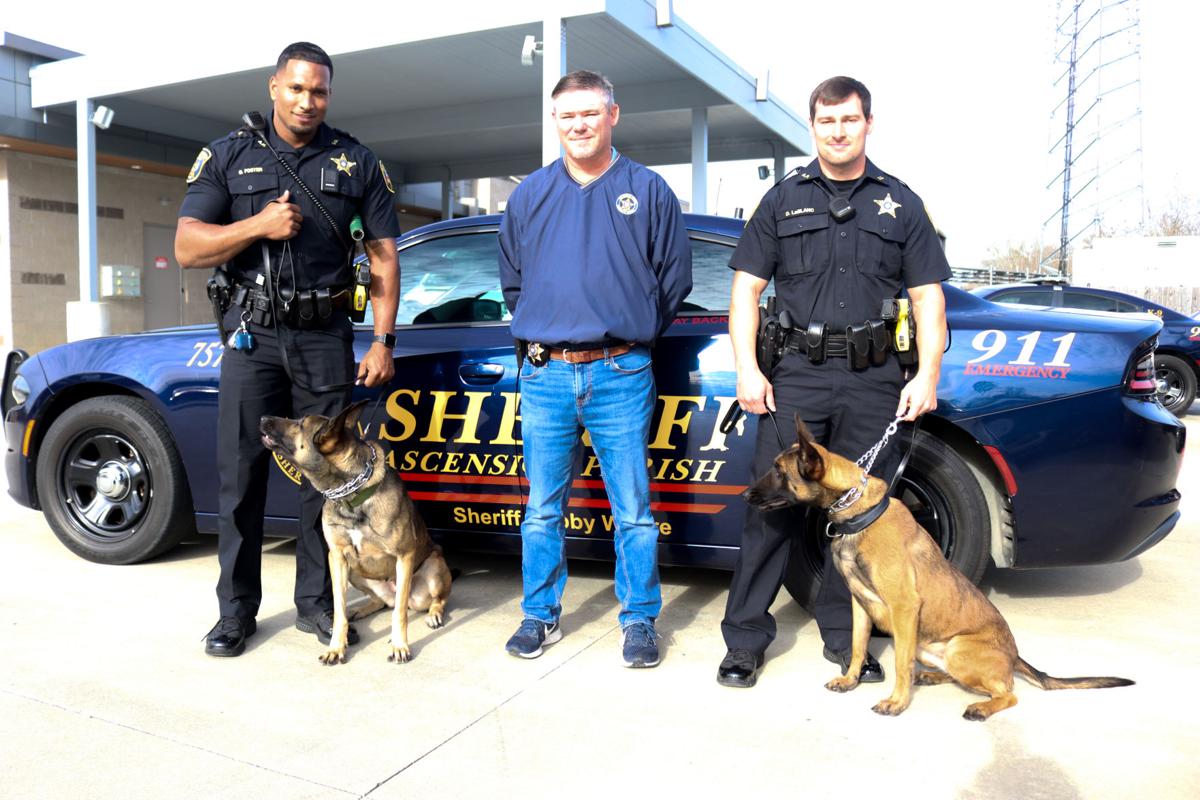 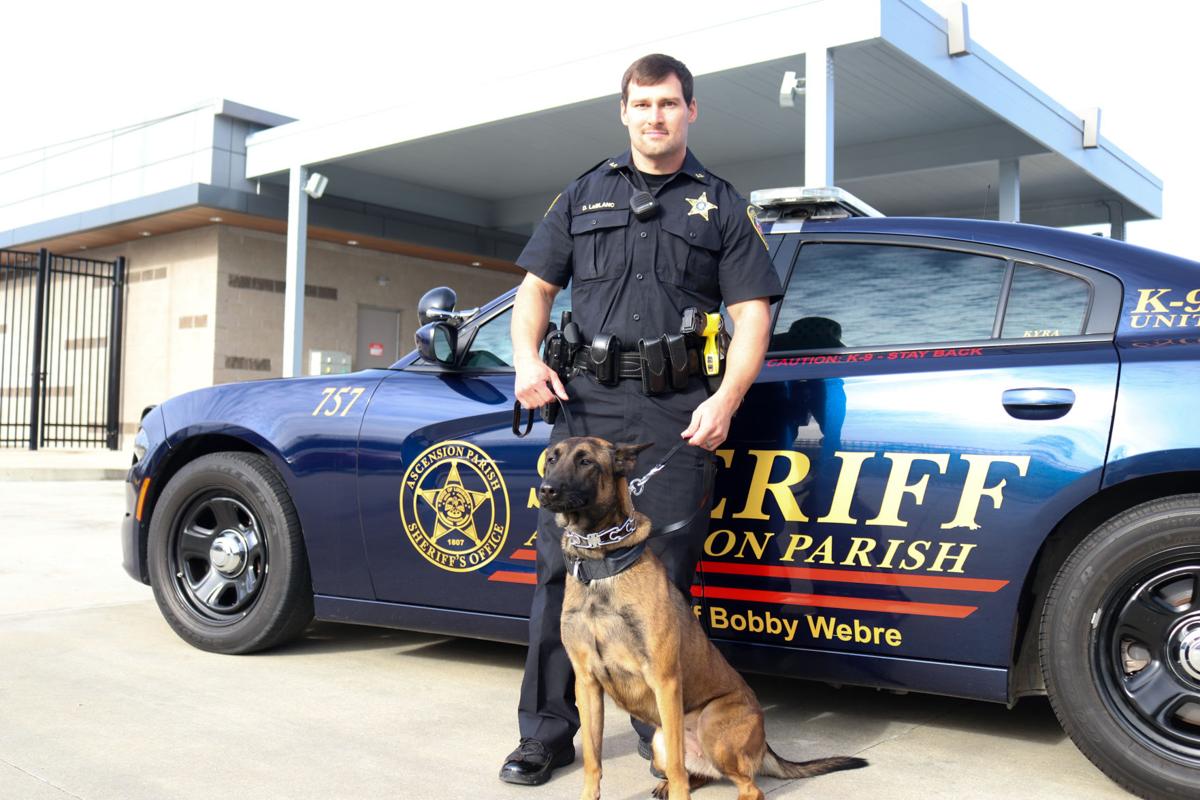 Detective Quinton Foster, left, holds his new K-9 partner Brenda with Detective Dexter LeBlanc, right, holding his new K-9 partner, Kyra. The dogs, which are specially trained to sniff out narcotics, mean a return of a K-9 program to the Ascension Parish Sheriff's Office after an absence of more than 20 years.

GONZALES — After an absence of more than 20 years, police dogs are back on the Sheriff's Office team in Ascension Parish.

Two Belgian Malinois dogs joined the force this fall and recently wrapped up weeks of training along with their human handlers, detectives Quinton Foster and Dexter LeBlanc, with the Sheriff's Office Narcotics Division.

The newly acquired police dogs, Brenda and Kyra, are trained to sniff out drugs, especially opioids, and when they make a find, they immediately sit down — a telling sign for the high-energy animals.

After nearly a quarter century without a K-9 unit, the Ascension Parish Sheriff's Office is preparing to add four-legged partners back to its …

"They're incredibly intelligent animals," said Sheriff Bobby Webre, who started the Sheriff's Office search for its police dogs this past summer.

It has been 24 years since the Sheriff's Office last had a police dog, in 1995. They fell out of use then, but Webre said that today police dogs are excellent ways to "beef up the narcotics division."

"There's no denying there's an opioid epidemic here and across the U.S.," he said.

"We're trying to help curb the drug problem here," Webre said. "Police dogs are one of the fastest and easiest ways to do it and it's effective."

Over the last two decades, the use of the Belgian Malinois breed has grown in law enforcement because of the dog's intelligence and ability to detect narcotics, Webre said.

At approximately $10,000 each, the dogs, bred in the Netherlands, were purchased by the Sheriff's Office from Abbeville-based USK9 Unlimited, which provides law enforcement with trained police dogs.

"They are excellent tools for law enforcement," Reames said. "I'm excited to see them back."

Detective Foster said the dogs will be doing "free-air" sniffing of the outside of vehicles and also the searching of homes, when a search warrant has been obtained, to detect hidden drugs.

"These are single-purpose dogs," Foster said. "They're our partner; we're like one system, a K-9 team."

The police dogs live with their handlers' families; Brenda is Foster's K-9 partner and Kyra is LeBlanc's.

Foster said Brenda wants to mother the children of the family. LeBlanc said Kyra is playful and full of energy.

"I've always been a proactive detective," LeBlanc said. "I like to get out there and fight crime, see how much narcotics we can get off the street."

Kyra and Brenda will be there to help.