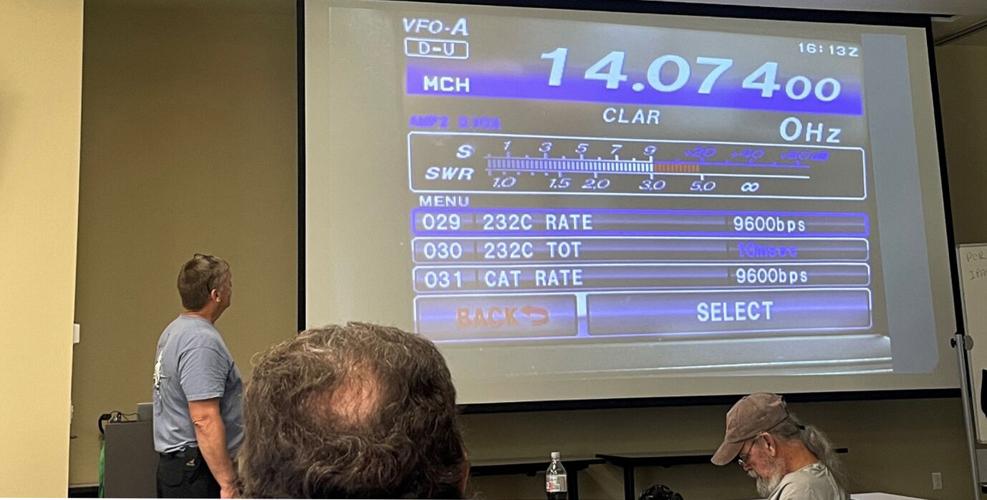 Elmer Tatum, left, teaches a lesson about FT8 to the Ascension Amateur Radio Club at the Prairieville Fire Department Training Center on June 25, 2022. 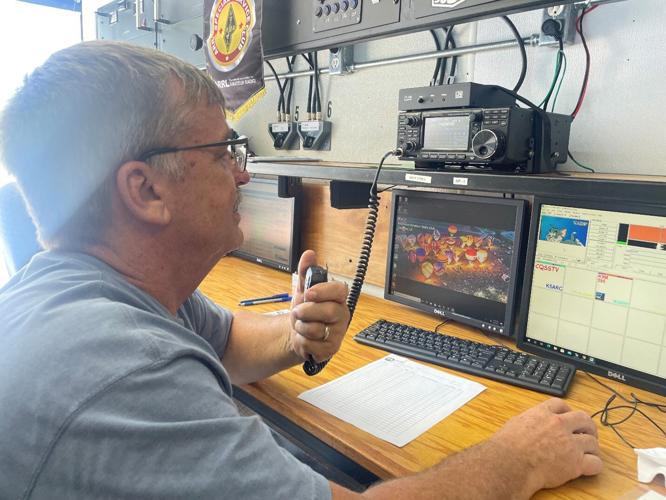 Elmer Tatum speaks into his ham radio during the Ascension Amateur Radio Club’s field day in its mobile unit parked at the Prairieville Fire Department Training Center on June 25, 2022. 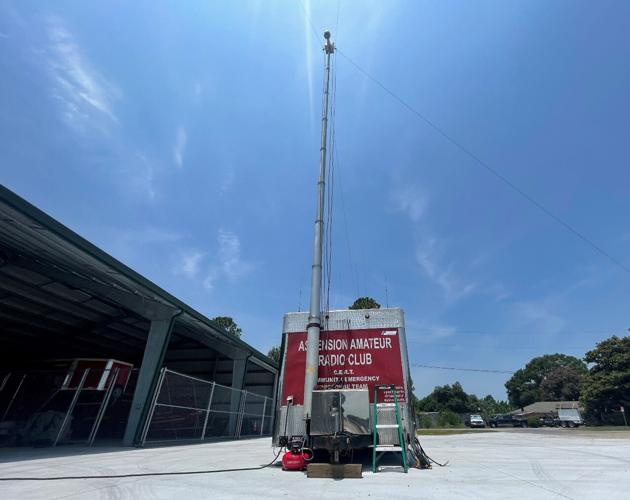 Elmer Tatum, left, teaches a lesson about FT8 to the Ascension Amateur Radio Club at the Prairieville Fire Department Training Center on June 25, 2022.

Elmer Tatum speaks into his ham radio during the Ascension Amateur Radio Club’s field day in its mobile unit parked at the Prairieville Fire Department Training Center on June 25, 2022.

Part of a network of similar organizations around the country and the world, the Ascension Amateur Radio Club is more than just a hobby group of enthusiasts sharing in their passion for ham radio; they’re public servants in their own right.

Its members, volunteers who invest their time into maintaining radio equipment out of their own passion, seek to provide a service to the Ascension Parish community and beyond by maintaining a constant line of communication with emergency services in the event of natural disasters.

Stuck without hearing from his family for days during hurricanes, club member Jamey Smith, the assistant chief of the Prairieville Fire Department’s District 3, took up ham radio to keep in touch with his family and help others do the same.

“The biggest thing is providing communications if some of the local emergency networks go down,” explained Smith, one of the group’s 40 members. “We’re equipped with a lot of radio equipment and frequency bands to be able to communicate locally, state wide and globally.”

The event was a chance for the club, founded in 1986, to communicate via their radio equipment with other clubs around the country and the world holding similar events, as well as familiarizing themselves with equipment so that when an emergency comes, they’re ready.

“What we do, as a part of our hobby, is provide a service to our community and that’s where ham radio works with the state and NGOs,” said Elmer Tatum, the club’s secretary and treasurer.

Out of an independently powered, FEMA-funded mobile trailer attached to a 25 foot antenna and lined with equipment connected to different frequencies and agencies like the Red Cross and the Governor’s Office, members weren’t limited to morse code or voice to communicate over the radio, Tatum explained.

Tatum specifically exchanged his call sign, an image of hot air balloons at a festival, with a ham radio user in California. They sent their call sign back, a distorted image of Tweety Bird from Loony Tunes.

“A lot of people have the stereotype that ham radio is a bunch of old crusty white guys over a morse code key, and we’re not. We’re much more than that,“ Tatum said. “When the internet came along, people thought it would be the death of ham radio. But we figured out a way to hook our computers to the radios. We can actually send email over ham radio with no internet access.”

One of the most popular systems used by amateur radio enthusiasts to integrate their radios with computers and the internet, FT8, was the subject of a brief class given shortly before the group began to put it into practice. At the end of a presentation on the topic, Tatum explained that this system “is so easy a cave man could do it.”

With a system like FT8 accessible to anyone with $100 to spend on a handheld radio and a computer to pair it with, he explained that the integration of radio with the internet helps to maximize the scope of communication when signals are weak.

During a disaster like a hurricane, Tatum said, the use of these systems is necessary to reach emergency services and groups like the Cajun Navy that may have lost contact with the general public.

“If your police and fire departments go down, there’s some backup services that they have,” said Joe Roppolo, a member of both the Ascension Amateur Radio Club and its Baton Rouge sister club. “But when it really goes bad and those services don’t work, what do you do? Now we have ham radio operators from their houses and our mobile station sending those messages.”

Roppolo and others who wish to specialize in emergency transmissions go through training to ensure no confusion is had when it comes down to the wire during a disaster like Hurricane Ida last year, as well as providing checkpoints for community events like marathons.

Surprisingly, the amateur radio hobbyists are concerned with astronomy almost as much they are with radio waves. Affected by weather, solar flares and atmospheric activity, radio communication is a multidisciplinary field that requires expertise of all kinds.

That’s where the Baton Rouge Astronomical Society, specifically master observer Coy Wagoner and his telescope aimed directly at the sun, comes into play.

“When these guys, especially the ones that do (high frequency radio), talk, the effect of the sun affects the propagation of radio waves,” Wagoner said. “These guys want to know when solar activity will affect them. The crossover here is that I show them what they depend on to have long range communications.”

Despite manning equipment that can help secure communication between loved ones and relief services, a big appeal of amateur radio like the groups in Ascension and Baton Rouge is bringing like-minded people together into a community that is enthusiastic to share new things about their hobby.

A lighthearted affair, many of the members come to the meetings discussing plans for vacations they hope to take with their families, with one item of discussion being the use of their radios at Disney World.

The idea was dashed as quickly as it was brought up with a laugh and suggestions for other places to bring their radios instead.

“Have fun, dammit,” the presentation that kicked off the field day read. “It’s a hobby.”