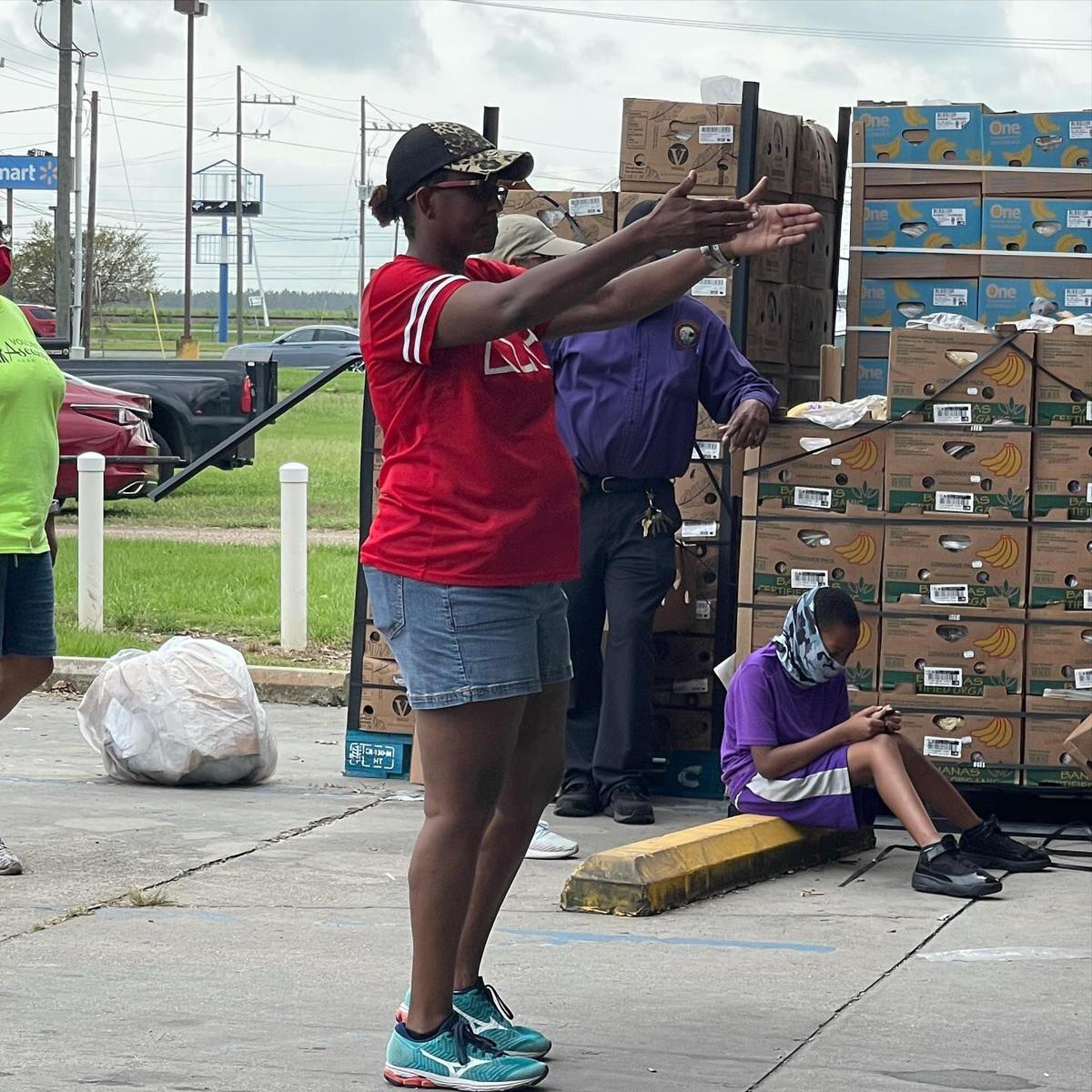 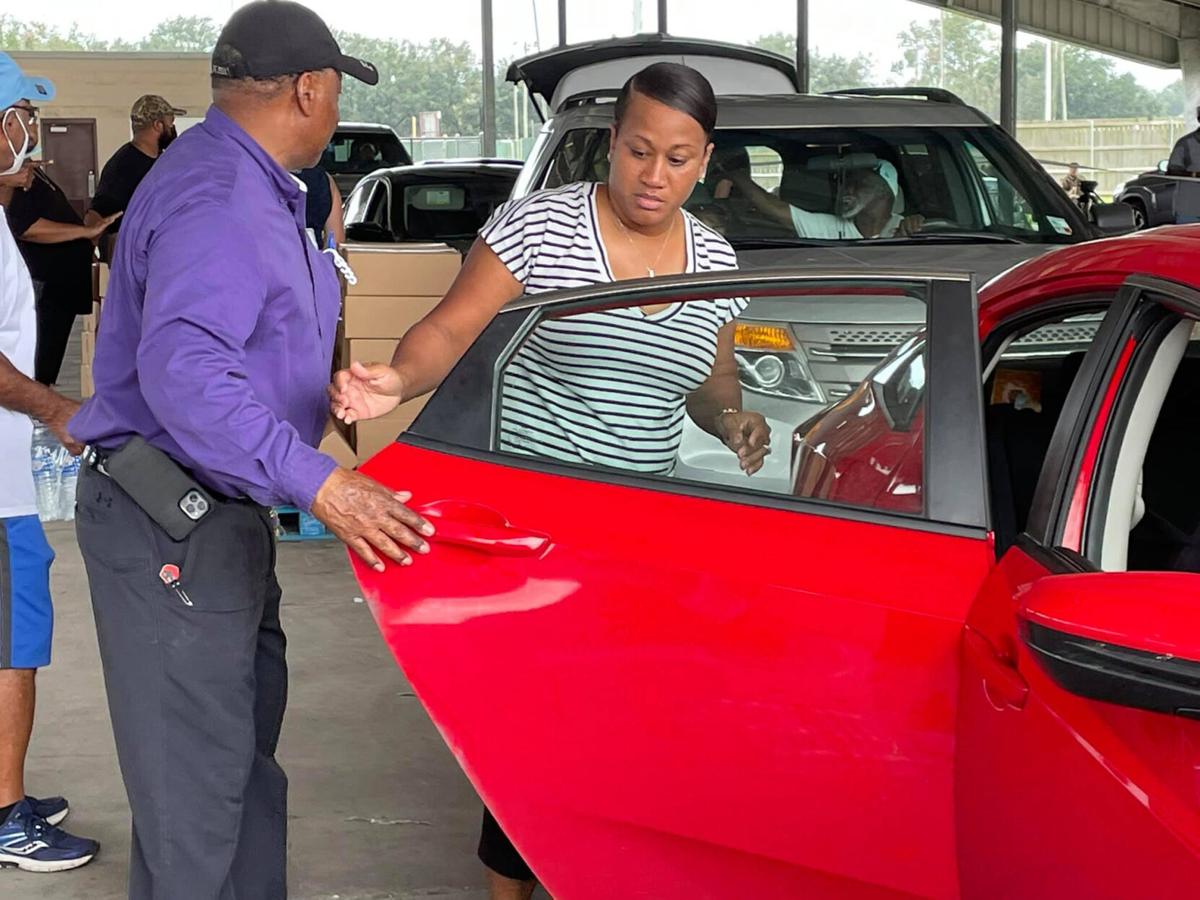 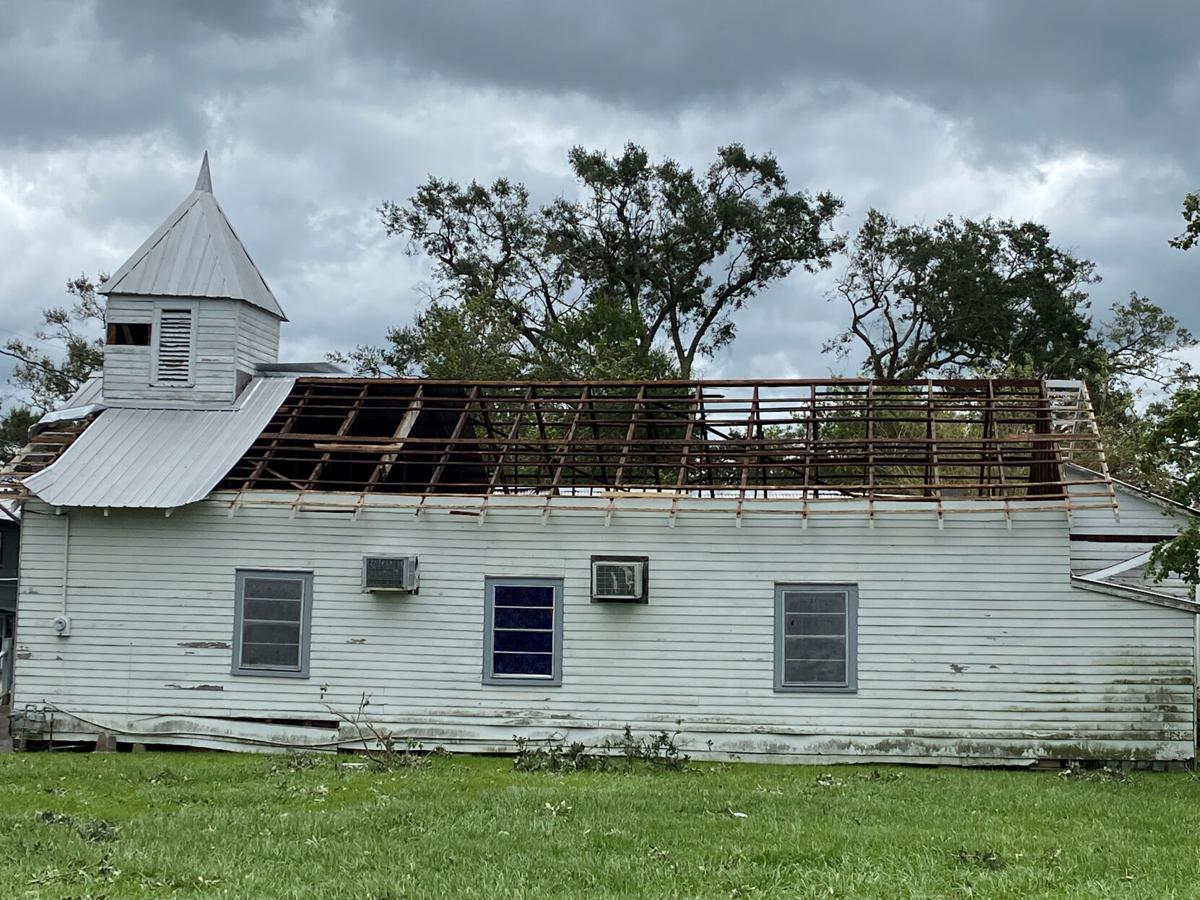 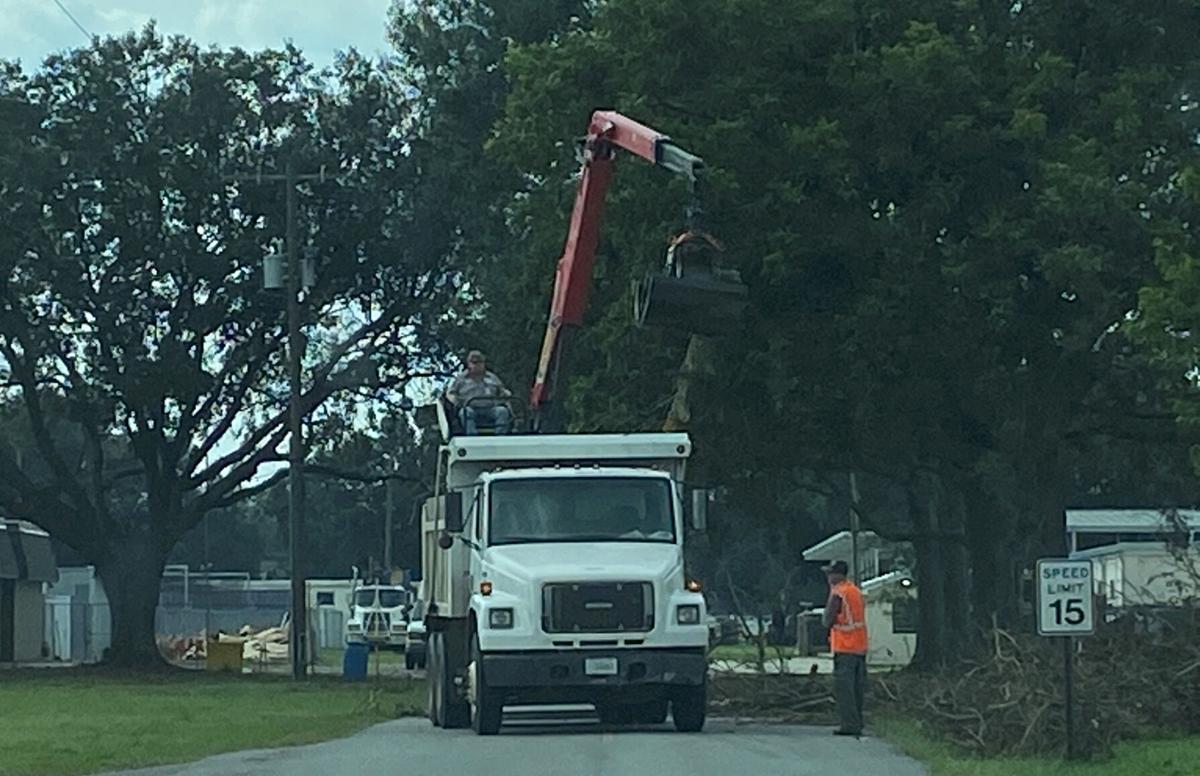 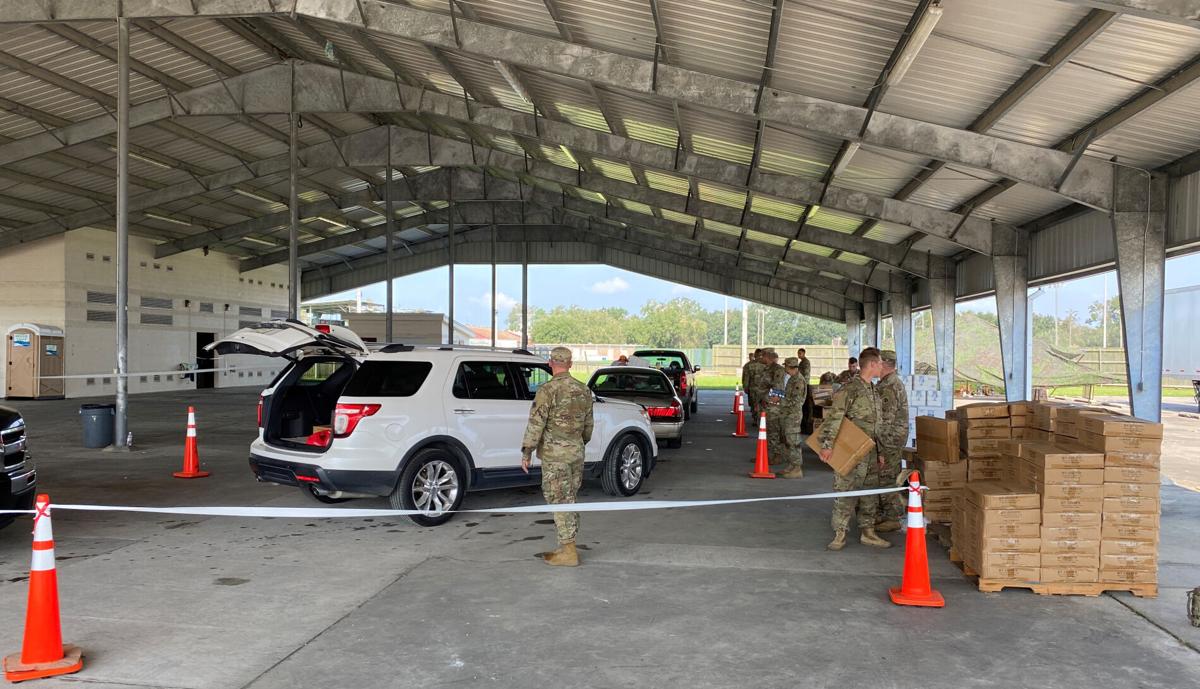 Louisiana National Guard members hand out water, tarps and MREs at the Frank Sotile Jr. Pavillion in Donaldsonville. They were assisted by Ascension Parish Sheriff's Office members and city leaders. 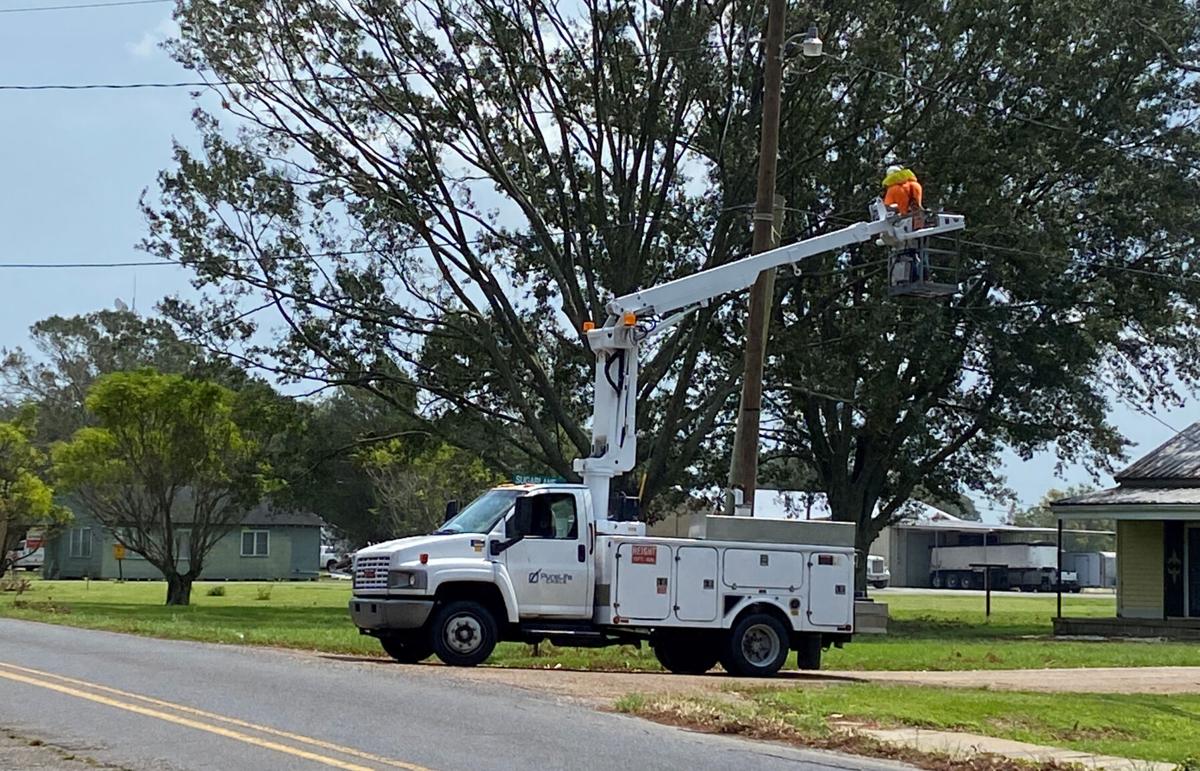 The scene of linemen in trees was a familiar one since Ida knocked out power to 100 percent of Donaldsonville residents. A majority of the electricity had been restored by Sunday.

Louisiana National Guard members hand out water, tarps and MREs at the Frank Sotile Jr. Pavillion in Donaldsonville. They were assisted by Ascension Parish Sheriff's Office members and city leaders.

The scene of linemen in trees was a familiar one since Ida knocked out power to 100 percent of Donaldsonville residents. A majority of the electricity had been restored by Sunday.

It's been a long two weeks for Donaldsonville Mayor Leroy Sullivan.

After riding out Hurricane Ida in his west bank home, Sullivan spent the next few days pulling community leaders together and working with other officials to provide assistance to his city.

He was still at it on Sunday. He said he has spoken to federal, state and local officials and agencies about providing assistance to his residents and helped hand out food and supplies provided by many groups and agencies, including several elected officials representing the area.

Sullivan spoke Sunday with an Entergy representative who reported that all of the city officials' and residents' power outage reports had been completed. The mayor said work will continue until every resident and business has power.

Sullivan said 100% of Donaldsonville residents were without power thanks to Ida. He estimates the city saw winds gusting up to 100 mph.

"Most important was there was no loss of life on the west bank," he said.

Sullivan said removing the debris from roads and helping people find a safe place to shelter was important the first days after the storm.

A shelter was set up at Lowery Middle School before the storm and people needing more temporary housing were transferred to a shelter in Gonzales.

"There were so many trees down," Sullivan said. "As I drove around the city, I saw roofs damaged, fences gone and trees down everywhere."

The Donaldsonville Fire Department performed damage assessment throughout the city. Sullivan said many houses are covered in blue tarps as they await the chance to repair roof damage, a major issue for city residents.

Many residents felt called to service.

“I tried to be a light in the midst of the storm," said Justice of the Peace Tamiko Francis Garrison.

"We were providing basic needs for others despite our own disasters at home. Serving from sunrise to sunset — some from sunset to sunrise — to make sure the citizens of the Westside of Ascension Parish had what they needed to survive."

She said her parents modeled and taught her the importance of community service and businesses did their best to stay open.

Donaldsonville resident Sidney A. Marchand III  reported that Marcello’s gas station and convenience store used a generator to keep their pumps open when most gas outlets in the area were closed for about a week. He commended the Marcellos on their initiative.

"The community response was so great that two sheriff’s deputies were there, day and night, to maintain order, as there were cars lined up for blocks and hundreds in line with gas cans in their hands," Marchand said in an email.

Sullivan said he's been out every day and into the night helping with food and supply distributions and working with agencies and volunteers providing help in the city.

National Guardsmen from Oklahoma sent several days providing water, ice and other supplies. The Greater Baton Rouge Food Bank was in town providing food and the Federal Emergency Management Agency was in town Sunday and Monday helping people register for hurricane assistance. A woman from Opelousas on Sunday was cooking red beans and rice, barbecue chickens and other foods for residents.

"There's just too many to list, but we're so blessed with the outpouring of help we've seen," Sullivan said. "It all shows how people have come together to help those in need."