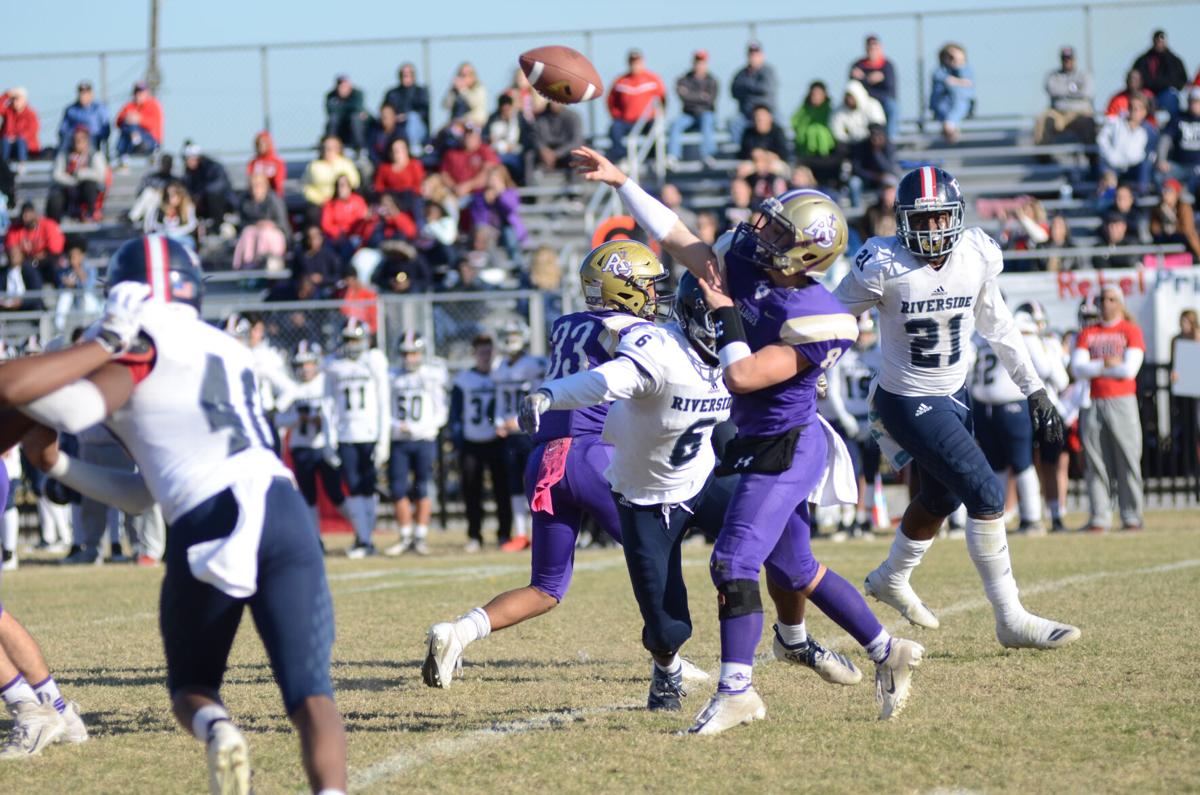 Jacob Dunn tosses the ball during a 2019 game. 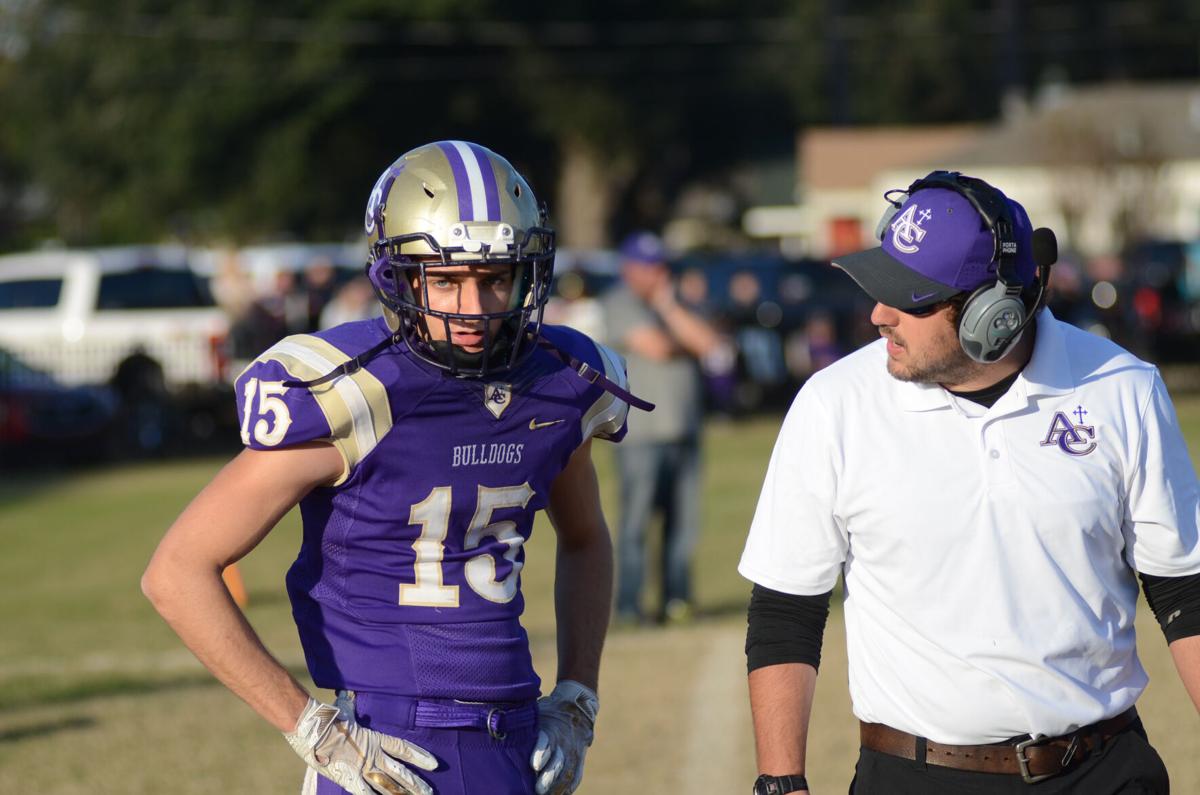 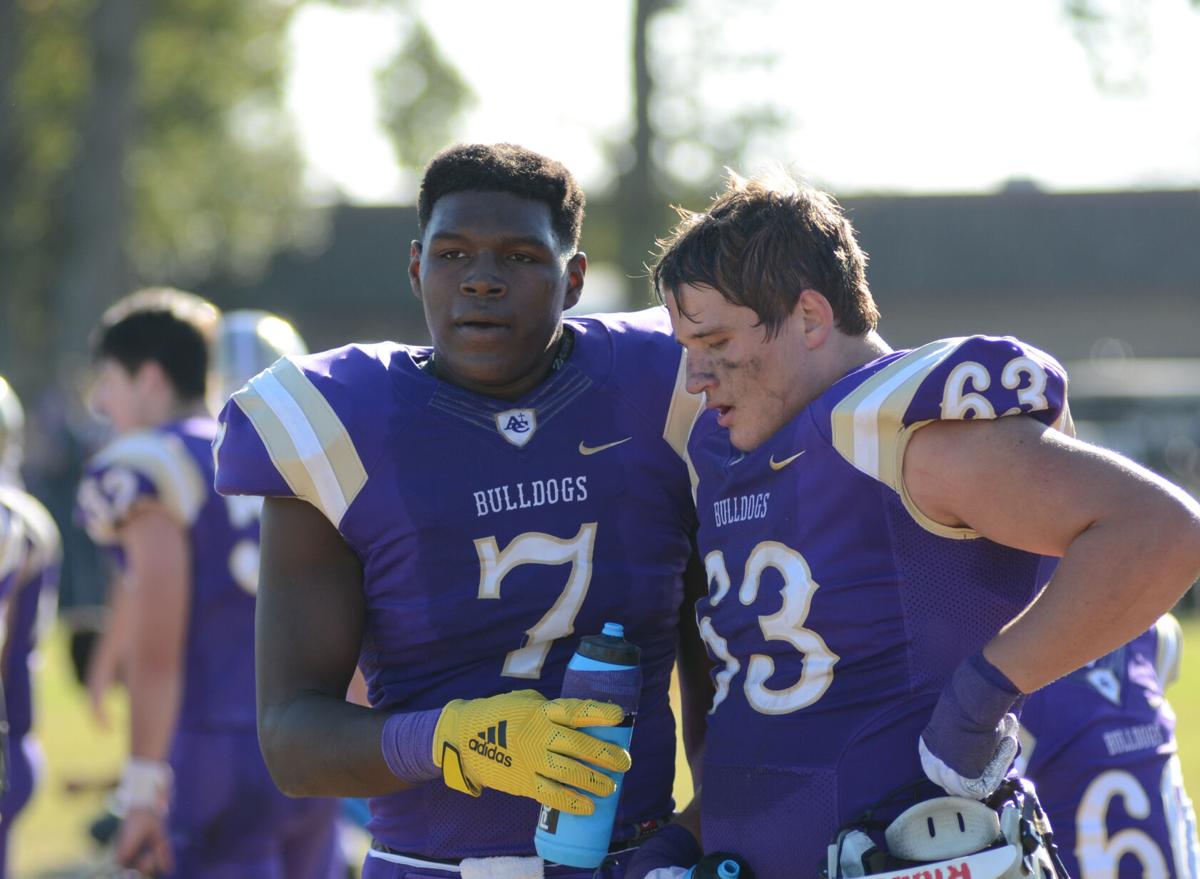 J'mond Tapp and Owen Smith chat during the 2019 season. 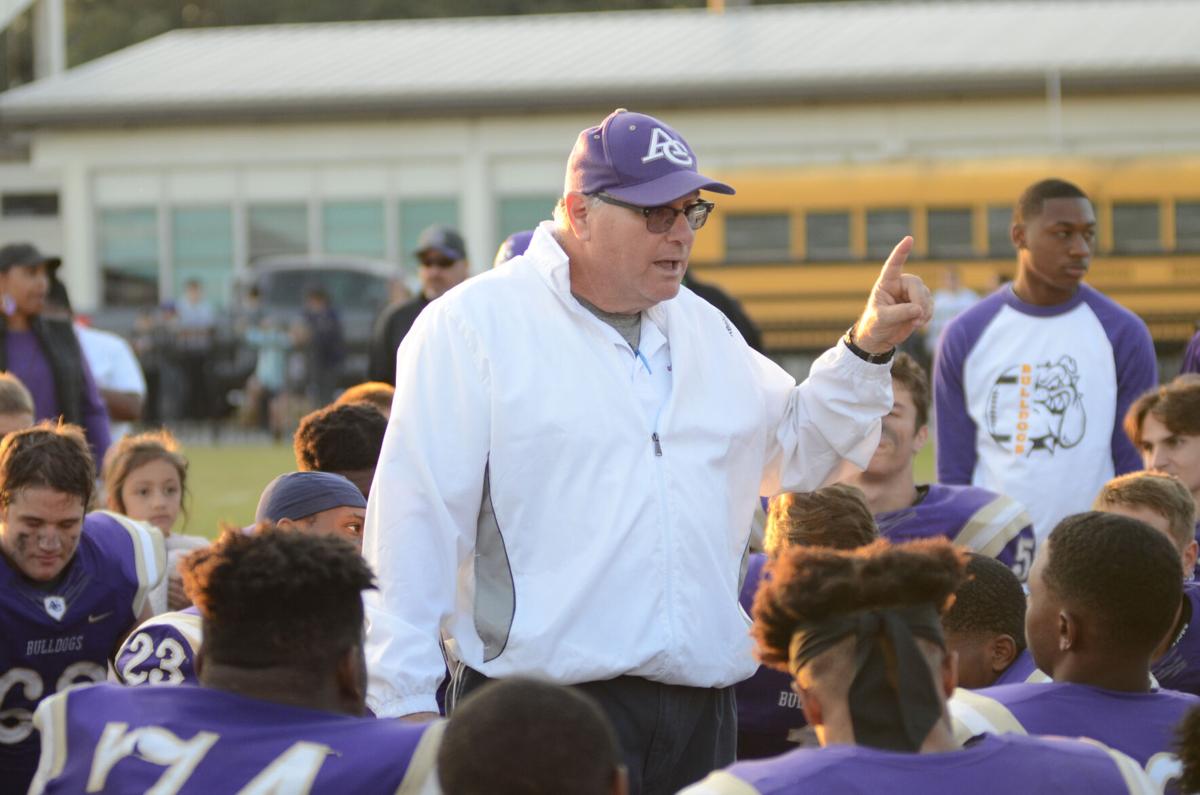 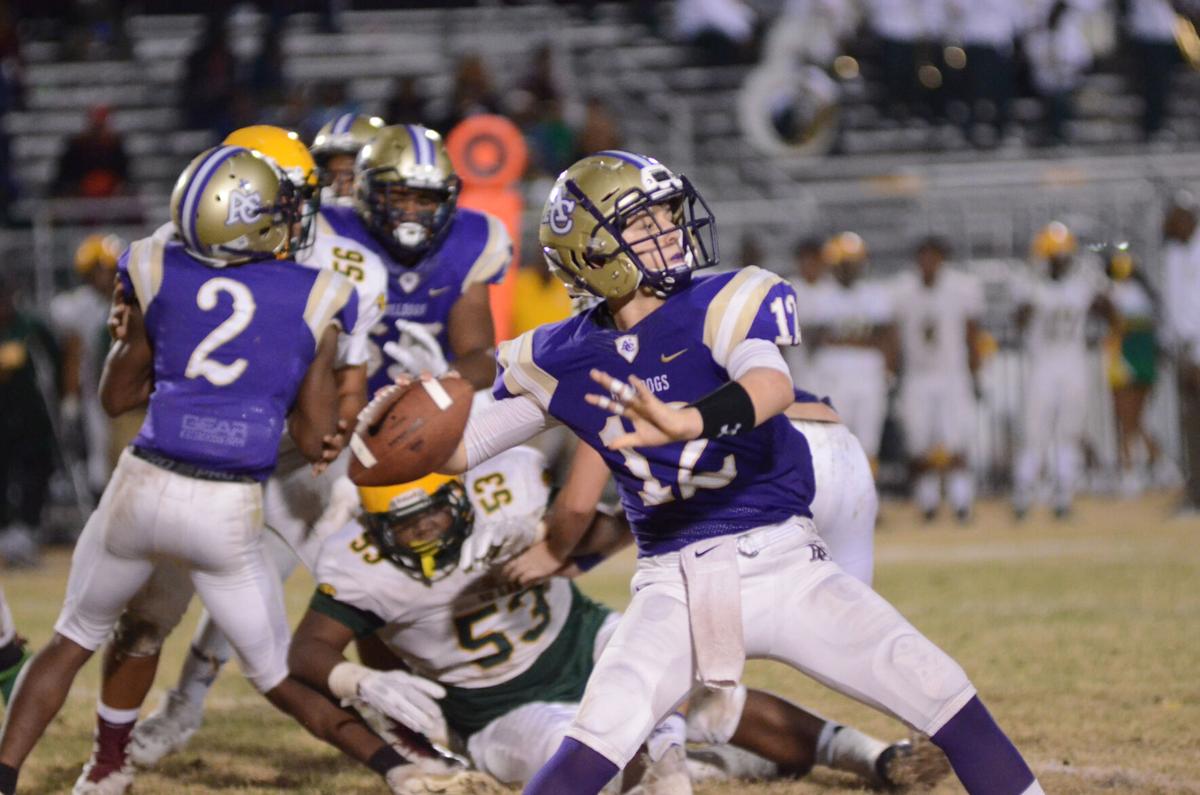 Bryce Leonard goes back for a pass.

Jacob Dunn tosses the ball during a 2019 game.

J'mond Tapp and Owen Smith chat during the 2019 season.

Bryce Leonard goes back for a pass.

Ascension Catholic has played football for a long time … over 100 years. The 2020 version of the Bulldogs includes a look at the present and the future.

Coach Benny Saia enters his second season after leading his team to a 9-0 record and a playoff loss to Southern Lab. “We had a great season. We did not finish like we wanted to as a team, but I am excited about this team and the future,” Saia said.

Gone from last year’s team are several 3- and 4-year starters like Brock Acosta, Eric Simon, Nick Hilliard (Princeton football) and Sam Mire. Also gone are Dorian Barber and Demontray Harry. “We lost a great senior class with several 4-year starters. The one that most people ask me about is Jai Williams — he was a special talent for sure,” Saia said.

Williams has moved on to Nicholls State as Ascension Catholic's all-time leading scorer (106 touchdowns) and nearly 7,600 rushing yards. He only trails his dad, Germaine Williams, who finished with 8,000 yards and 99 touchdowns.

The cupboard is certainly not bare for the Bulldogs. Several starters return on both sides of the ball. The offense will be led by quarterback Bryce Leonard, a sophomore who showed some flashes as a freshman. “Bryce got valuable experience last season. He has the respect of his teammates — that is a huge plus for us. We are hoping to put more on his plate this season,” Saia said.

Leonard threw for nearly 1,000 yards last season and double-digit touchdown passes. Filling the role as the main back will be sophomore Khai Prean. Prean is a talented runner with great vision and finished with nearly 1000 yards rushing and double-digit touchdowns. New running backs will be sophomore Casey Mays, junior Ethan Lewellen and junior Trevion Jacob.

The receivers will be fairly new. Returning is senior Joel Landry and senior Matthew Lafleur. Newcomers include sophomore Brooks Leonard, junior Troy Cole and senior Baylor Leonard. Brooks and Baylor Leonard join their brother, QB Bryce Leonard, with a certain level of comfort. Brooks will be a precise route runner. Cole is coming over from basketball — at a tall and long 6'3", he can certainly be a weapon.

The offensive line loses Mire and Hilliard (all state). Back are starters Owen Smith (265), Damien Pedescleaux (230) and LaShawn Bell (295). Smith is a returning all-district and all-parish lineman with some college offers. Bell will be moving to center and should provide good protection for QB Leonard. Pedescleaux returns at tackle and he has really matured. “Owen Smith and Devin Pedescleaux have shown leadership up front for us early on,” said Saia. Newcomers include junior Jacque Husers (225), freshmen Travis Cedatol (230) and freshmen Tre Williams (240). Senior Grant Richard is injured but is expected to return and be valuable player that can play several positions.

When the Bulldogs use a tight end, look for J’Mond Tapp (6'4"), senior Gage Breaux and freshman Jackson Landry (6'2") to get some reps. Tapp emerged as a big target in the red zone.

The kicker will be the steady senior Jacob Dunn.

The Bulldog defense will have a major overhaul with only four starters returning. Smith, Tapp, Pedescleaux and Bell return up front in the Bulldogs three-man front. Tapp has received several offers including some SEC offers. Other defensive lineman expected to contribute are Husers and Tre Williams.

The Bulldogs will break in three new linebackers. Dunn is moving down from his defensive back position. Newcomers are senior Brayden Duhon, junior Lewellen, freshmen Jackson Landry and freshmen Adrian Prean. The defensive backfield must replace the starting corners including all district/all parish Eric Simon. Juniors Lex Melancon and Jacob are potential starters along with sophomore Layton Melancon and sophomore Mays. Lafleur and Breaux return in the secondary.

“Matt, Gage and Jacob have been some early vocal leaders for us. They have some experience in our defense," Saia said.

Other potential newcomers that will challenge for playing time are sophomore Noah Robicheaux and senior Joel Landry. Replacing all-district/all-parish Brock Acosta will be tough, but early candidates include Khai Prean, Cole and Lafleur. The punter will be LaFleur, who was first team all-district last season. The Bulldogs lose games 1 and 2 due to the delayed start, but will still have some early tests with CCMC and Erath. Winning the district last season for the first time in 20 plus years was exciting, but the coaches know they will have a bullseye on their back.

White Castle, East Iberville, St. John and Ascension Christian will be tough opponents for the Bulldogs. As the Bulldogs prepare for what looks to be a strange season, one thing is certain.

“The boys have responded well. Last season is the past — this team is a new one with some unknowns, (but) we are excited to play. Our future is very bright,” Saia said.