Traffic heads west where Siegen Lane turns into Burbank Drive just past Highland Road and passes over Bayou Fountain on Thursday, December 19, 2019, in Baton Rouge. A U.S. Army Corps Engineers project would clear and widen this section of the bayou, one of five in East Baton Rouge Parish slated for work under the $255 million project. Water in the bayou eventually ends up in Bayou Manchac and the Amite River but a new Corps of Engineers analysis says the improvements won't worsen flooding in a 100-year storm. 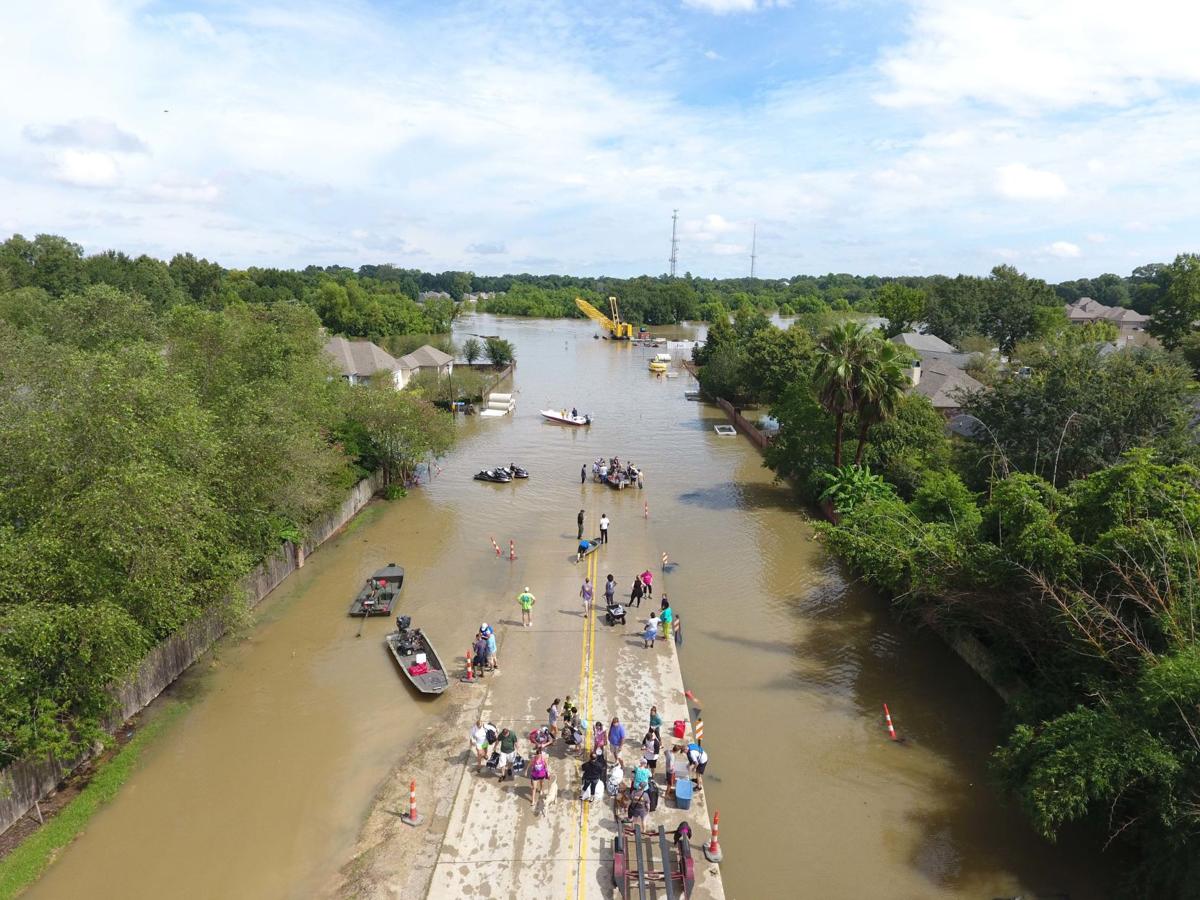 Rescue boats bring residents from their flooded homes near Jones Creek off of O'Neal lane during the August 2016 flood.

Traffic heads west where Siegen Lane turns into Burbank Drive just past Highland Road and passes over Bayou Fountain on Thursday, December 19, 2019, in Baton Rouge. A U.S. Army Corps Engineers project would clear and widen this section of the bayou, one of five in East Baton Rouge Parish slated for work under the $255 million project. Water in the bayou eventually ends up in Bayou Manchac and the Amite River but a new Corps of Engineers analysis says the improvements won't worsen flooding in a 100-year storm.

Rescue boats bring residents from their flooded homes near Jones Creek off of O'Neal lane during the August 2016 flood.

Along the river's 113 miles through Louisiana, bayous, creeks and other tributaries feed the Amite their share of water and send it south to Lake Pontchartrain's little sibling.

A $255 million drainage project the Army Corps of Engineers is proposing for East Baton Rouge Parish would give five key bayous and creeks a head start in that never-ending race to the Amite River and Lake Maurepas without affecting nearby parishes, a new analysis has found.

The project would give those waterways enough of a drainage jump in the worst rains — a 2½-day head start — that the most intense runoff and the highest water from those bayous would be in the river and headed farther south once the highest waters from the Amite's upper drainage areas hit the lower river, the Corps analysis says.

The analysis also suggests that the flow of the water put into the Amite from Beaver and Blackwater bayous in the Central area and from Jones Creek, Ward Creek and Bayou Fountain in the southern part of the parish is dwarfed by the water flow in the Amite, offering a relatively small bump to the river.

"The peak discharge of the Amite River is the controlling factor," said Nick Sims, assistant deputy district engineer for the Corps of Engineers' New Orleans District.

First authorized for construction in 1999 and fully funded by Congress last year, the drainage project would clear and widen Beaver and Blackwater bayous and Bayou Fountain, clear and de-snag Jones and Ward creeks, and add concrete lining to portions of both waterways.

In all, the project would speed water flow along 66 miles of bayous and creeks in East Baton Rouge that empty into Bayou Manchac or directly into the Amite.

Revived after the August 2016 flood, the project also stirred old fears aired nearly 25 years ago that speeding up drainage from East Baton Rouge Parish could worsen flooding downstream in Ascension and Livingston parishes.

The Corps' newest analysis provides more scientific detail behind similar responses of minimal impact that an earlier generation of Corps officials gave in the mid-1990s to then-skeptical parish officials. Though the responses of current parish officials have been mixed — Ascension is tentatively opposed; Livingston is not — the Corps' latest work already aided in the passage of $10 million in sales tax bonds in November that East Baton Rouge's city-parish government needs to pay for land acquisition for the project.

Corps and city-parish officials said the first part of the project that would clear and de-snag Ward Creek, Bayou Fountain and part of Jones Creek could go out for bid sometime in the spring or summer, though the other, more complex parts won't be ready until 2021.

City-parish officials welcomed the Corps' conclusions. Fred Raiford, East Baton Rouge director of drainage and transportation, said his parish has tried to find out what downstream impact may exist and said the Corps was as good as any entity to respond to the concerns of neighboring parishes.

"We don't want to hurt anybody in an adjoining parish. I mean that's not what our goal and objective is," Raiford said. "However, I don't want to be held up on a project that's very beneficial to our people in East Baton Rouge Parish … because somebody is opposed to that."

State Rep. Clay Schexnayder, R-Sorrento, who represents both Livingston and Ascension parishes and serves on the State Bond Commission, had held up a vote on the bonds in October to be sure officials in his parishes didn't have objections.

Schexnayder said that both parishes indicated they didn't have any objections after several meetings with the Corps and city-parish officials about the Corps' latest findings.

"We found no apparent evidence of hydraulic modeling issues or a water surface increase that would negatively affect Livingston Parish," Ricks wrote in a Nov. 20 letter.

Ricks did reserve the right to do additional reviews after the then-draft report was published or if aspects of the project were changed, but Sam Digirolamo, Livingston's planning director, said on Dec. 19 that the parish has no "reason to have any concern with the project."

In Ascension, officials sent a letter late last month opposing the issuance of the bonds until they had more time to analyze the Corps' findings but also held out the possibility they could withdraw that opposition depending on what they find.

In Ascension, jaundiced eye on modeling

"At this time, we're just really looking for more information," Parish President Kenny Matassa told the drainage board Nov. 18 as it voted to tentatively oppose the bonds.

Parish President-elect Clint Cointment, who has been focused in recent weeks on negotiating a proposed 30-year sewer contract, said he didn't have enough information yet or the staff to comment on the Corps' analysis but wants to see what kind impact the Corps found.

In mid-December, the parish's eastern drainage district followed up on Matassa's letter and hired a local firm, GSA Consulting Engineers, to do the promised analysis and bring back a report in 45 days.

Raiford said the city-parish still has preliminary work with the Corps to finish before the project goes to bid or even land acquisition starts.

Calling the Corps' work a fair take on the situation, Bob Jacobsen, an independent Baton Rouge hydrologist, said the agency appeared to select the most reasonable scenario to assess the drainage project's impact but also suggested that different scenarios involving a 100-year rain in the basin at least held the possibility for less favorable outcomes.

"I think it's also fair to say that if you're in Ascension Parish, you'd might also like some scenarios that looked a little different," said Jacobsen, who contracts with the Amite River Basin Commission but wasn't commenting on behalf of the body.

The thrust of the Corps's new four-page analysis looks at the combined effect the proposed drainage projects would have on the peak flow of the Amite during a hypothetical 100-year rain in the basin. The analysis considers the impact at three points along the river: the Comite River near Denham Springs, Jones Creek near Baton Rouge, and Bayou Manchac northwest of Port Vincent.

Greater stream flow is directly linked with greater river heights, so the Corps' comparison of peak flows is really a way of looking at whether the worst potential flooding on the Amite in a 100-year rain would worsen, lessen or stay the same after the East Baton Rouge project.

In all three cases, the Amite's peak flow doesn't change or is even muted a bit, suggesting river heights wouldn't change appreciably either. This peak flow passes the Comite, Jones Creek and Bayou Manchac about 4 to 4½ days after the 100-year rain event. A 100-year rain has a 1% chance of happening in any year.

Meanwhile, drainage from the five improved waterways would send their peak flows into the Amite about 1½ to 2 days after the 100-year rain event, earlier than the expected peak flow in the Amite, the analysis says.

This faster drainage out of East Baton Rouge does increase somewhat the Amite River's flow initially. But, under the Corps' analysis, the Amite also is on a rise of its own already, ending up with a stream flow that is 2 to 4 times what the Baton Rouge waterways spur.

At that point, the volume of water from the Baton Rouge waterways is small enough, and enough of that water would have gone farther downstream toward Maurepas, that the proposed improvements would cause no change, or even lessen slightly, river levels in the Amite, the Corps found.

Sims, the Corps official, says the early increases in Amite River's flow caused by the drainage project wouldn't be enough to make the Amite overflow its banks.