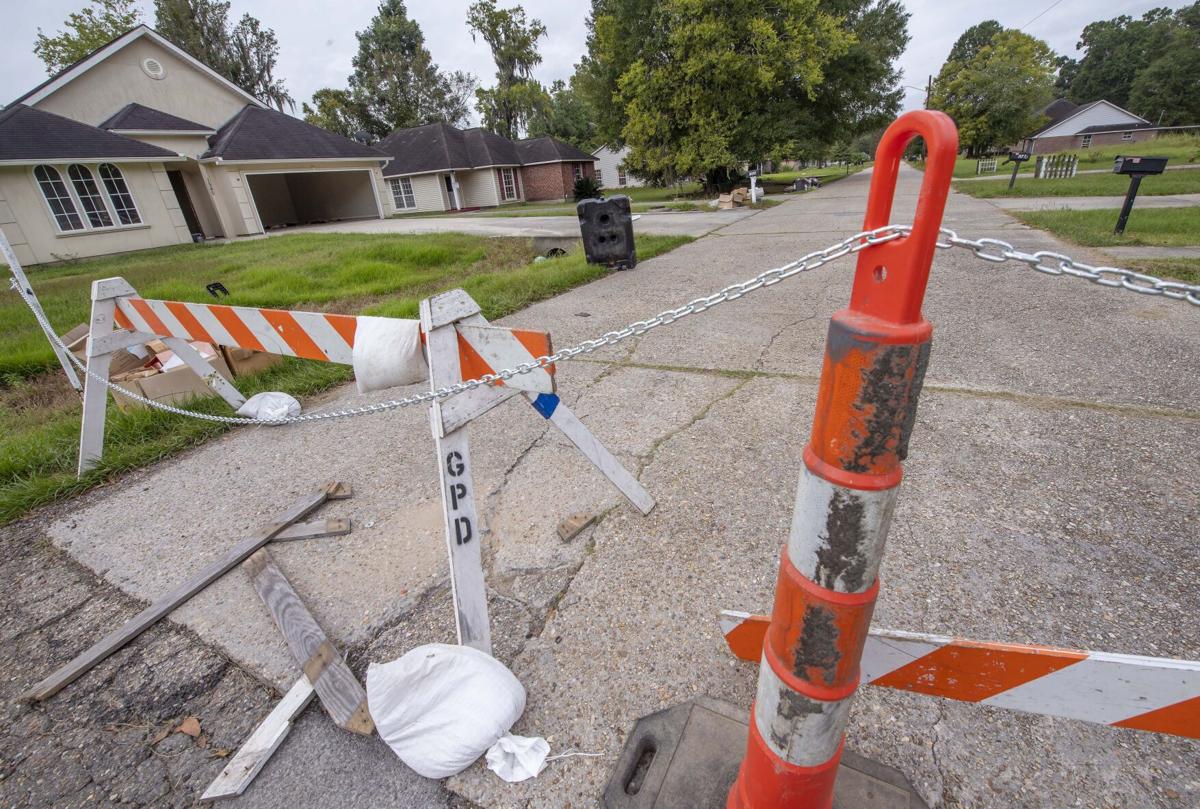 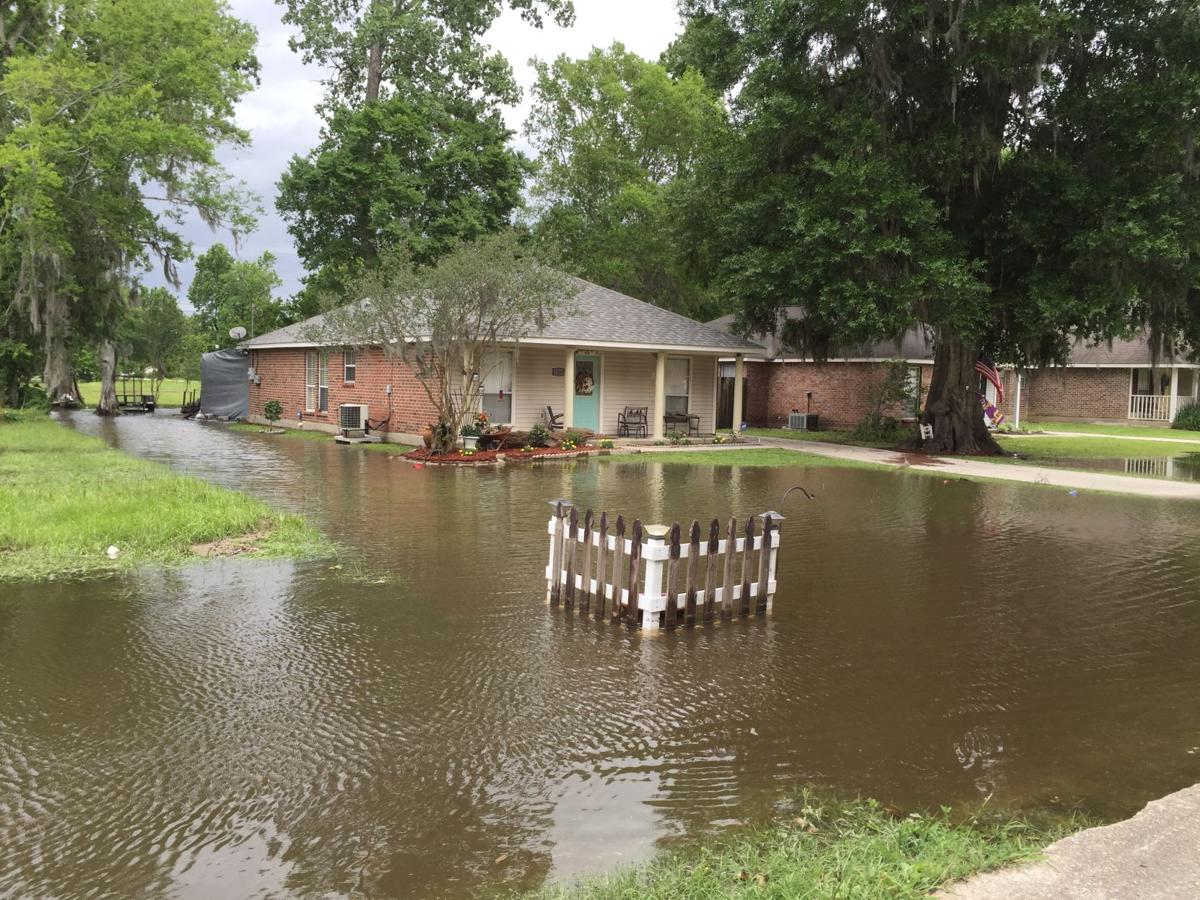 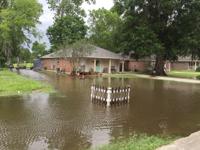 Advocate file photo - The yard of an East Silverleaf Street home in Gonzales holds water after heavy downpours in the spring of 2017. In September 2020, homeowners on the street were able to leave their homes behind, through a federal buyout program.

Advocate file photo - The yard of an East Silverleaf Street home in Gonzales holds water after heavy downpours in the spring of 2017. In September 2020, homeowners on the street were able to leave their homes behind, through a federal buyout program.

GONZALES — A federal buyout of homes and property on a flood-prone street in Gonzales that dead-ends into wetlands has become a reality: all 41 property owners have received their checks, dropped off house keys with the city and moved on with their lives.

In back-to-back appointments scheduled at City Hall over several days in September, a buyout process that took more than three years came to a successful end for property owners. Each left with checks in hand for the amount of the pre-2016 flood appraisal values of their homes on East Silverleaf Street.

Some of the residents were also eligible for funding from the state's Restore Louisiana funds, if a U.S. Department of Agriculture offer didn't meet a certain per-square-foot amount.

In some cases, Gonzales City Engineer Jackie Baumann said, "People were going straight from City Hall to closings on their new homes."

Many of them, she said, are relocating in Gonzales and Ascension Parish.

For former Silverleaf resident Anna Laferrara, the buyout means she will be able to move to a new home out of state.

Laferrara finished her paperwork at City Hall in the early afternoon on Sept. 19 and headed back to her house one final time, to put a few last items in her car.

Laferrara said she had to turn to the Small Business Administration loan program after a contractor paid with flood insurance money disappeared without doing the repair work on her flood-damaged home.

She had to leave some repair work undone, though, after the SBA money ran out.

The buyout, she said, "is a blessing for me."

Residents of oft-flooded street in Gonzales take buyout; property to be restored as wetlands

The new future for Laferrara and the 40 other Silverleaf property owners came through the Emergency Watershed Protection Program administered by the USDA's Natural Resources Conservation Service.

The city started looking for answers for Silverleaf residents after the flood of 2016, when heavily impacted homeowners came to public meetings asking for help; their neighborhood, built in the mid-1980s, flooded deeply even after regular thunderstorms.

"I promised to research all potential projects," Baumann said. "Never in my life did I think this would be what the solution would be."

"This is the most difficult but most rewarding project I've ever done," she said.

Baumann credits the office of U.S. Rep. Garret Graves with steering the city to the watershed protection program.

Other partners, in addition to the USDA, were the state's Office of Community Development, which administers the Restore Louisiana funds, and the Baton Rouge-based Center for Planning Excellence, which helped residents through the application process.

The story of Silverleaf continues, however. Under the buyout program, the entire street will be returned to wetlands.

The homes will be demolished, the concrete making up the street and driveways will be removed, along with all underground infrastructure, and what was once Silverleaf Street will be covered with topsoil and planted with native trees.

The city is disconnecting utilities now, Baumann said, and the demolition of homes and other infrastructure is expected to begin in November.

The Silverleaf buyout project draws to a close even as a milestone was reached recently for another flood-prone neighborhood, Pecan Acres in Pointe Coupee Parish.

Residents there will be moving to new homes located two miles away — where the groundbreaking was held last week — and the former neighborhood will also be returned to wetlands, through the efforts over several years of local, state and federal officials.

This neighborhood flooded 17 times in 30 years. Now, it's being relocated 2 miles away.

In the summer of 2016, Sylvia Williams joined neighbors in circling Gov. John Bel Edwards, pleading for help from the massive floods that hit …

Baumann, of Gonzales, said that one former Silverleaf resident who came in to finish things up at City Hall last month told her, "I don't have to worry about rain anymore. I don't have to sit at work and wonder if I'm even going to be able to get to my house."