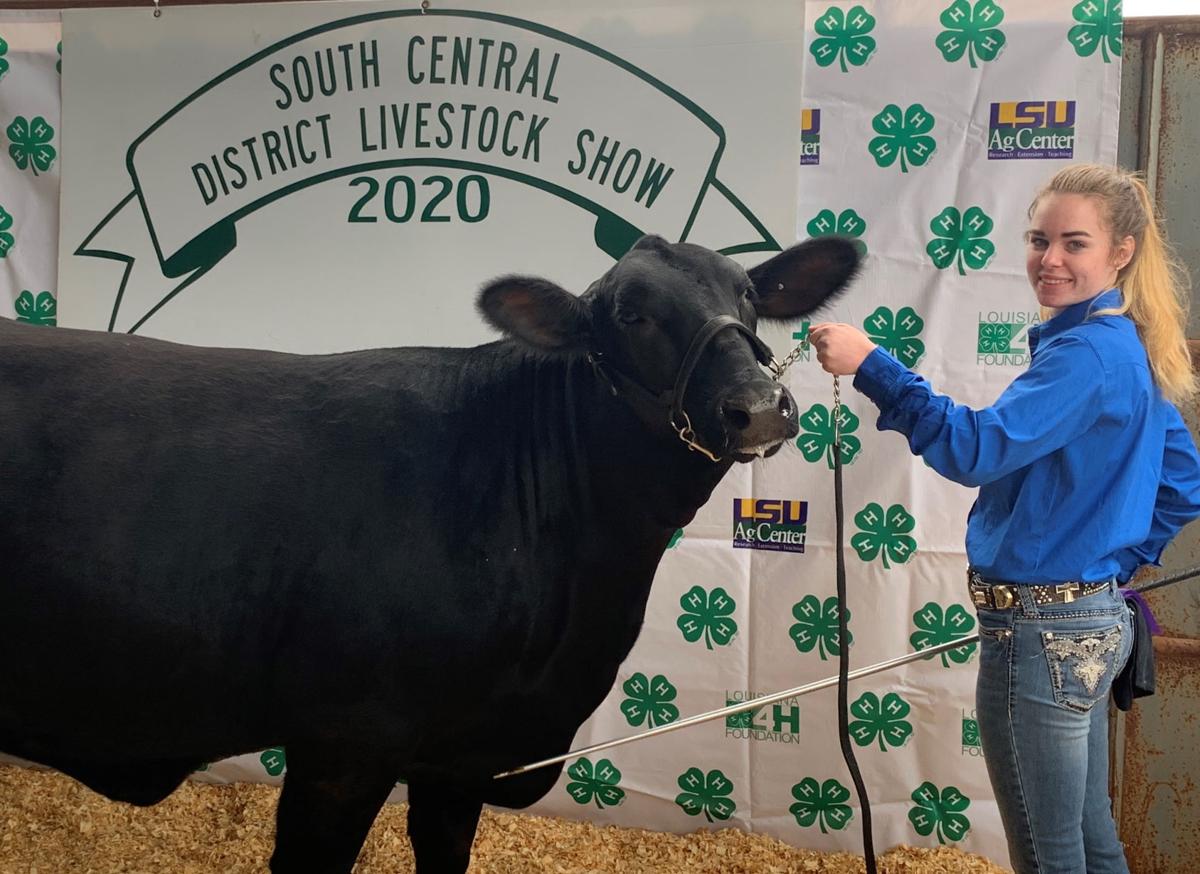 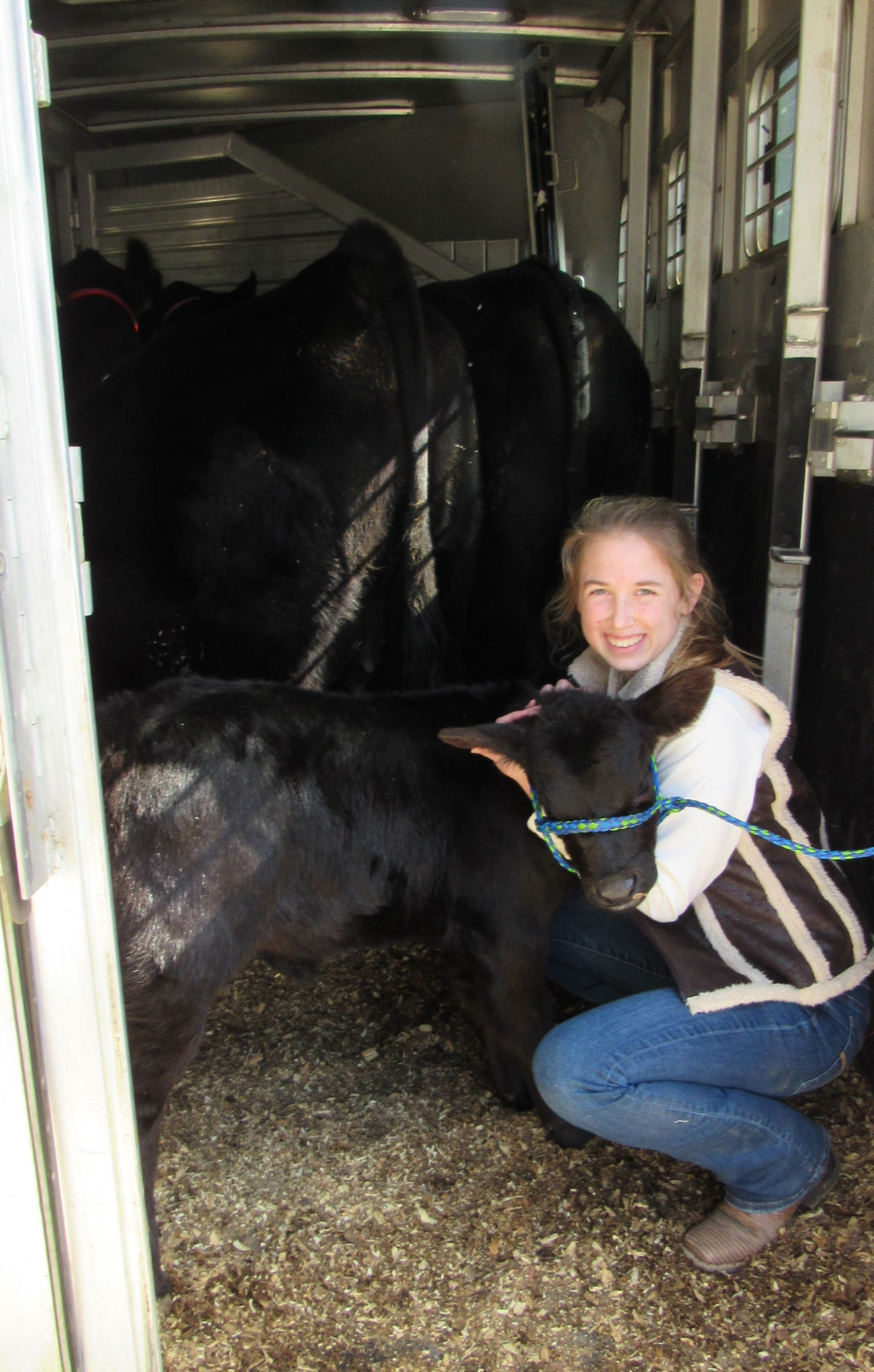 Mackenzie Triche, a 16-year-old West Feliciana Parish competitor, prepares her calf for the ride back home. 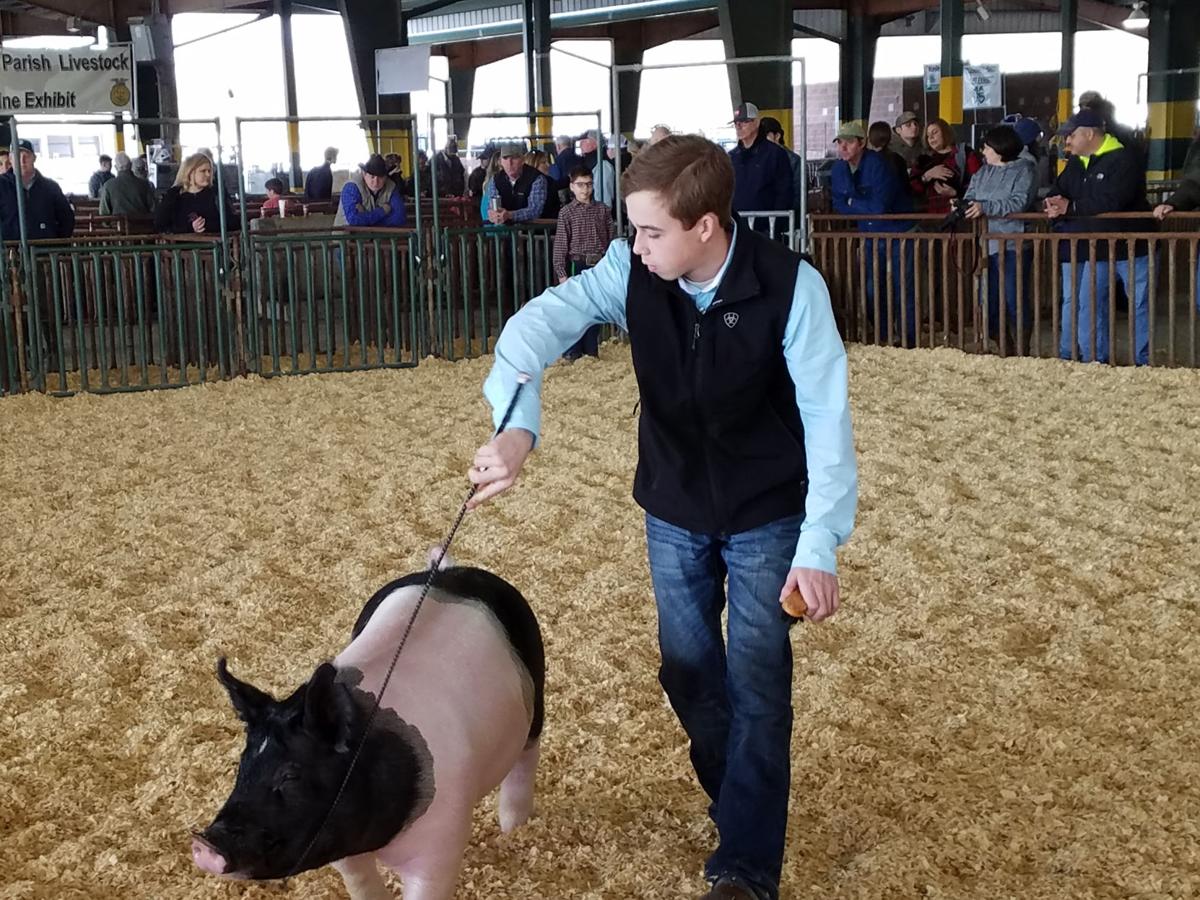 Mackenzie Triche, a 16-year-old West Feliciana Parish competitor, prepares her calf for the ride back home.

It’s the end of the day, and Mackenzie Triche, 16, is a little tired after working with her cows all day at the 2020 South Central District Livestock Show.

From preparation to exhibition to loading up for the ride home, livestock show exhibitors on Saturday had their eyes on the prize — to qualify for the LSU AgCenter State 4-H/FFA Livestock Show set to begin Feb. 8.

Triche, an 11th grader from West Feliciana Parish, opened the heavy door and climbed up into the back of the farm trailer to be with her calf and bigger cow. Despite the sawdust, dust and other unspeakable things common at such shows, she was a happy girl. She walked away with first in class for Angus with her adult cow. She made it to the state show.

Sponsored by the LSU AgCenter at the Lamar-Dixon Expo Center, the show welcomed hundreds of livestock student competitors on Friday and Saturday.

Feliciana mom Sonya Brouilette spent Saturday rooting for her children, 16-year-old Owen and 13-year-old Landry. Brouillette said raising livestock with the kids is a way of life for her family. They have an older brother in college who got them interested in the program even as little kids too young to officially participate.

“I think it's so good because they learn how to win and learn how to lose — gracefully. They kind of don’t have a choice,” Broulliette said, chuckling. “They are learning how to cooperate with things, animals, that don’t cooperate back. They learn how to deal with adversity when a pig maybe doesn’t respond.”

The family breeds and shows pigs, and it’s a year-round process at their home. They also show dairy cows, and they’ve won some class and showmanship for both types of livestock. One pig wore the Grand Champion Market Pig ribbon with pride. Dad, Marty, helps out when he can.

“The next two weeks are pretty much going to be getting ready for the state competition and then doing it,” said son Owen. “Andy is the best hog this year. My sister and I pick a theme every year, and my sister picked 'Toy Story’ — so we named the pigs after animals. There’s also Woody, Jessie and Bullseye. In total, our family showed five pigs, and we breed about 50 that we sell in the fall to other fourth grade kids from across the state (in 4-H clubs).”

The family also has about 25 head of dairy cows, and the two siblings show six. “The best thing is that you learn about life skills and responsibility,” Owen said. “There’s nothing too bad about it. It’s a labor of love for me.”

East and West Feliciana parish clubs are bonded to each other, in a way. Kaitlin Lucas, 4-H Club extension agent for West Feliciana, thinks Owen has nailed the lesson: caring, for an animal or each other.

“I think this program is super important because it teaches students responsibility. They learn from the beginning to the end how to take care of an animal. They learn they win or lose with livestock but both are teachable moments and it includes every aspect of skills needed to succeed,” Lucas said. “Every kid learns to deal with things, like getting up early every day and getting out of the house and camaraderie with friends. We have a lot of fun, but we use their school subjects in what we do.”

Lucas enjoys working with the kids and sharing her knowledge, both as an adult in 4-H and as a child growing up in the program. Daily, she works with 67 exhibitors in fourth through 12th grade.

Xavier Bell echoes her sentiments as the 4-H agent who works with youth development through the LSU AgCenter. He oversees the kids in East Feliciana Parish, and 4-H development there includes West Feliciana youth in one group, as well. “One thing that is important is teaching the kids responsibility — not only to take care of themselves but also the animals,” he said. “They have to get up early in the morning to feed the livestock, and then wash them. It’s a rural area, and we have a lot of people with livestock and farms. Horses are big out here, and they raise and show them in 4-H, too.”

The community club members of East Feliciana alone boast chickens, dairy, pigs and beef animals — over 20 animals and 10 families. It’s the student’s responsibility to ensure the animals are well-fed, growing, healthy and trained for the livestock show ring when competition comes around. If they haven’t been working with an animal, it will show in the ring, according to Bell, who says there are about 70 families involved in the East and West Feliciana club.

Bell worked the swine, goat and sheep competitions during this year’s livestock show. “It’s a very exciting time with this opportunity for students to participate in the championship drive. Not everyone can do it,” he said. “They have more than one chore and a lot of sweat, but at the end of the day they learn to shake each others’ hands. And if they don’t have their homework done, they can’t work with the animals like they love to do so it’s another incentive for their schooling. If they do well in school, they can participate in the project.”

Dressed in a blue long-sleeved, button-up shirt and black vest, Kade Milton was concentrating on his black-and-white Hamp hog. He showed the Guilt Hamp hog and reaped the title of Reserve Breed Champion. The Slaughter 18-year-old represents East Feliciana well, and he’s been doing so for four years in 4-H. The student is a senior at Carney Christian Academy, a home school, but participates in the program for fun.

“My uncle is from Mississippi, and he knows a bunch of people who raise hogs. He asked if I’d like to do it, and I said yes.” Milton said. “I’m fooling around with the animals and learning how to raise them. The first day of competition, I showed a Duroc pig and won Best Breed Champion. So I got a belt buckle that says champion on it.”

Talking is not Milton’s strongpoint, but he explains himself readily when it’s about raising livestock. “I’ve learned to see how a pig is built, how it looks, if it would produce good meat. It teaches me to be responsible, and I make a lot of friends,” he said. Often seen wearing his tan boots with decorative stitching and a Buffalo Electric cap from his dad’s company (dad is Mark), Milton named his pigs Red, Hershey, Bacon and Pumpkin. After high school, he intends to be at his dad’s side learning the electrical trade. He’ll still be seen walking the pigs around his plot using a soft, limp stick to guide them.

Other lessons for Milton and his twin have been time management and getting along with others. “This has realty brought him out of his shell and taught him how to communicate,” his mom, Charlotte Milton said. She was surprised he talked so readily about his hobby with a stranger.

Charlotte Milton said Kade Milton didn’t want to participate in sports, but chose this extracurricular activity due to the history of participation by his aunt, uncle and cousins in Mississippi.

“He’s done well, but it’s hard work. He’s done so well and we’re ready for state,” she said. “He has to get up before school and do the feedings and keep the animals washed. And he has to walk them like a dog every day, so it’s time consuming but it pays off in the arena. You can see the effort he puts into it. The kids hold their heads up high. We even schedule our vacation around all this.”

Editor's Note: This story was changed on Feb. 6 to correct the title of Kaitlin Lucus.