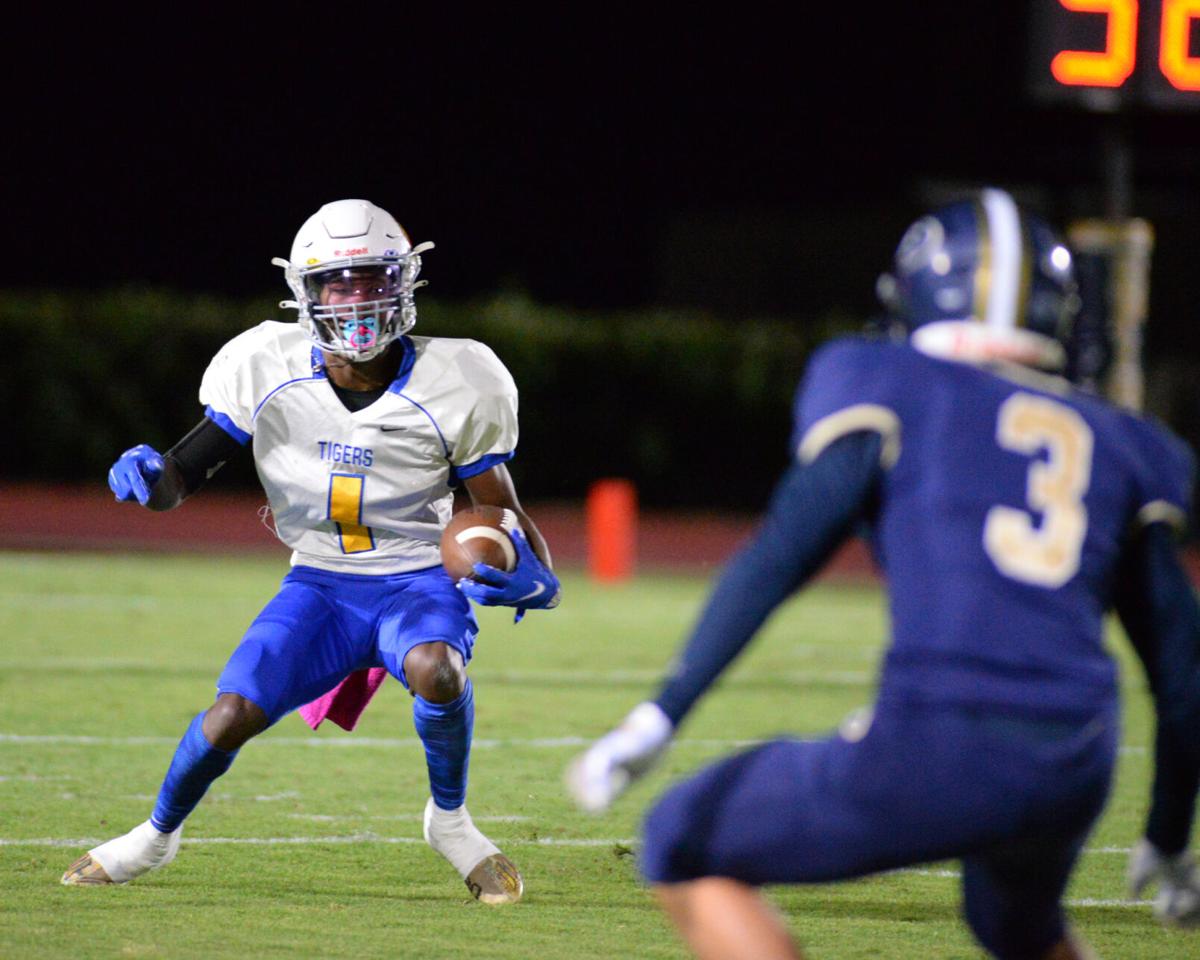 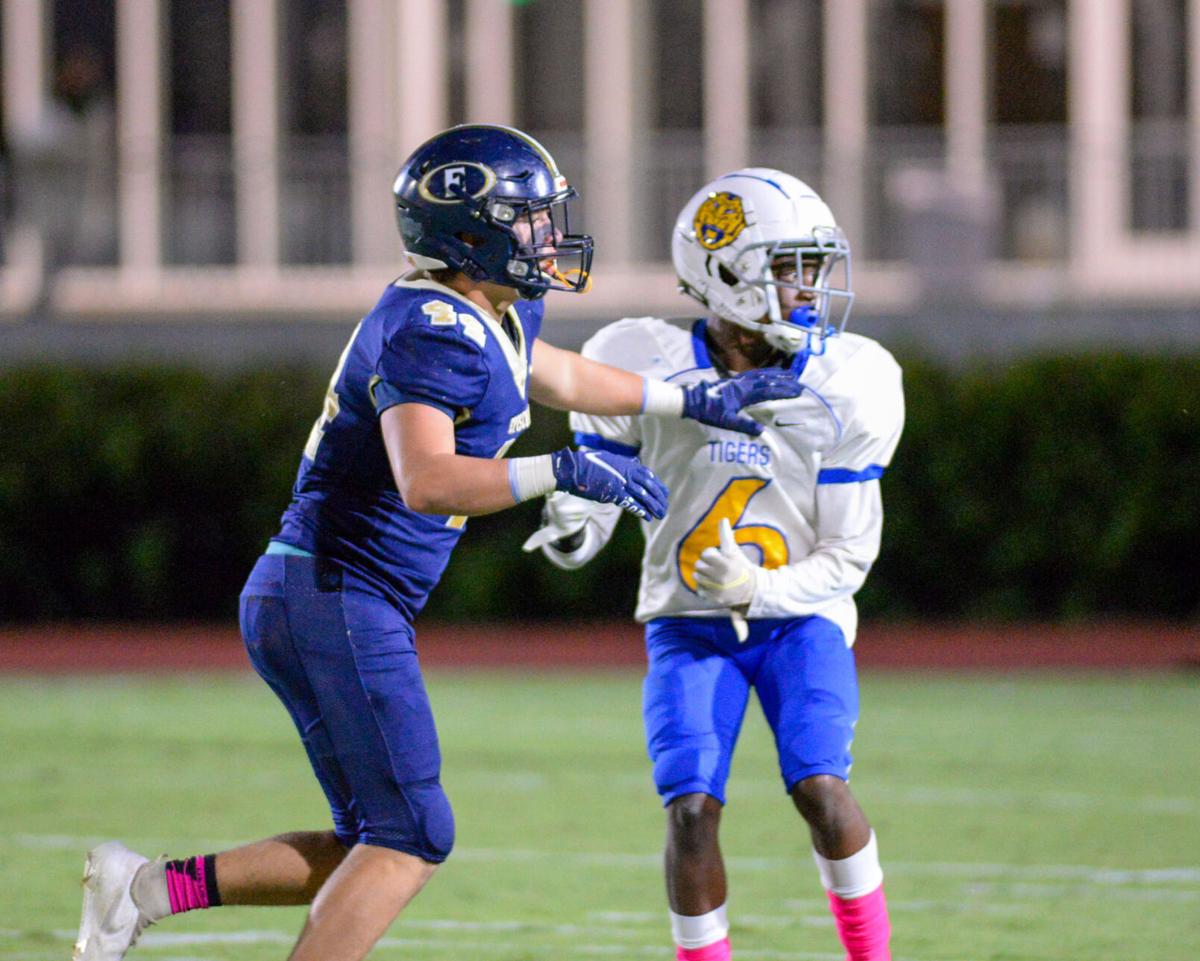 East Feliciana receiver Micah Hodges looks for a pass as he is defended by Episcopal Knights linebacker Chase Cresson. 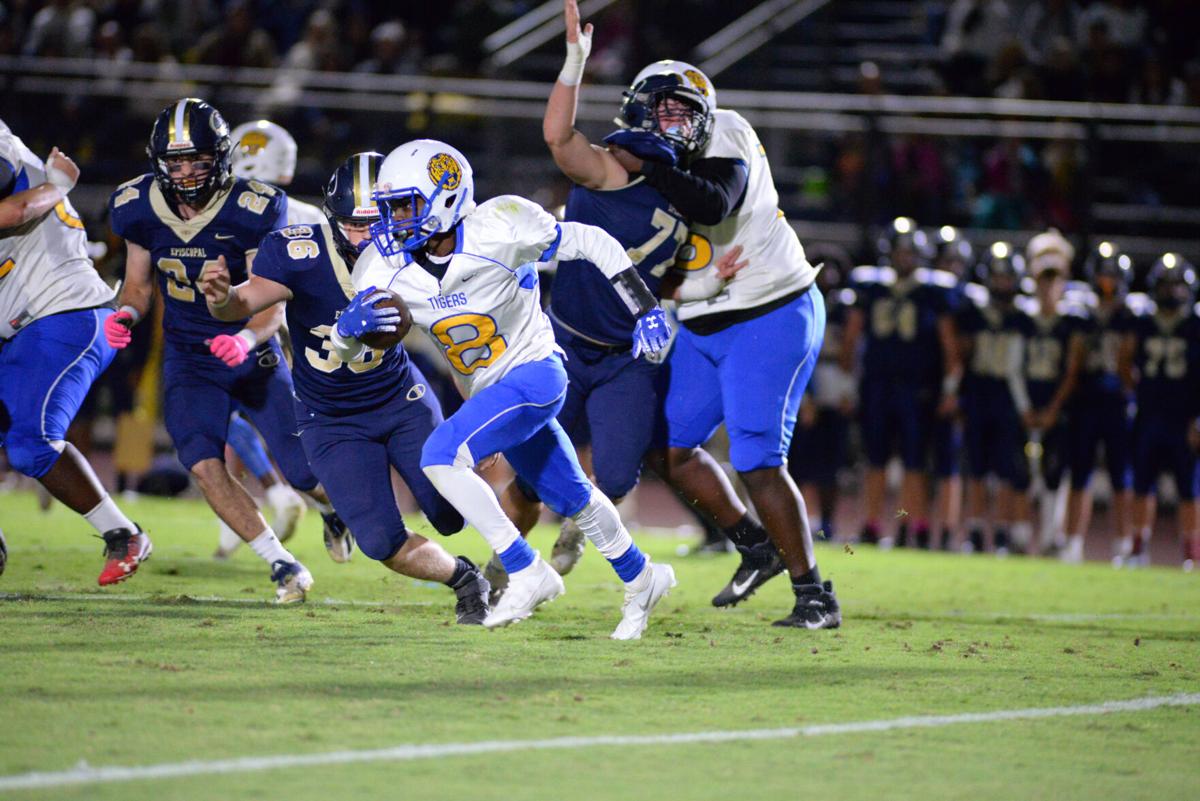 East Feliciana running back Tom Hayes get pass the Episcopal line just escaping the grasp of defensive end John Brady Sessums Jr. The Knights rolled past the Tigers in to remain undefeated in district 8-2A.

East Feliciana receiver Micah Hodges looks for a pass as he is defended by Episcopal Knights linebacker Chase Cresson.

East Feliciana running back Tom Hayes get pass the Episcopal line just escaping the grasp of defensive end John Brady Sessums Jr. The Knights rolled past the Tigers in to remain undefeated in district 8-2A.

It was a frightening start to the Halloween weekend for the football teams of the Feliciana parishes as East Feliciana, Slaughter Community Charter and West Feliciana all suffered respective losses on Friday night.

East Feliciana Tigers had a much anticipated rematch with district powerhouse Episcopal of Baton Rouge. The two teams faced earlier in the season as a result of Hurricane Ida throwing many scheduled matchups from around the area for a loop. That first game ended 42-35 in favor of Episcopal. The figures were not so close this time around with Episcopal picking up a 62-18 win over the Tigers.

The Tigers did put up a great fight and there is no shame in losing to a one-loss team who currently sits atop the district rankings. East Feliciana will have the opportunity to end the season on a high note Friday as they return home to take on Northeast High School in what is both the final district and final overall game of the 2021 campaign.

Slaughter Charter suffered their first double-digit loss of the season at Grant High School in a non-district game 52-8. Slaughter Charter moves to 5-2 on the season. It is an out of character loss for a Slaughter Charter team that has looked impressive this season, but one has to bear in mind that the Knights are a 1A team who went on the road this late in the season to face a 3A team with only two losses on their record. It would have been nothing short of a David and Goliath story had Slaughter Charter been able to leave there with a win.

The Knights have a golden opportunity ahead of them Friday as they will play host to a 7-2 Southern Lab team who have run roughshod over a handful of opponents this season. Should the Knights be able to come out with the win in this district matchup, they will have gone undefeated in district play and set themselves up very nicely for what should be a great playoff run.

West Feliciana hosted undefeated district powerhouses U-High in its penultimate game of the season. The Saints were unable to strike down the Cubs, but put up a far better fight than 90% of their opponents to this point. The final score in that game was 55-28 in favor of U-High, but it is the bigger picture that matters on this occasion. While scoring 28 points may seem like a consolation prize in a 55-28 loss, U-High have only allowed one other team to score more than 14 points all season, that team being fellow district powerhouses Madison Prep. When given that perspective, you see that West Feliciana becomes one of only two teams to legitimately challenge U-High in the 2021 season, a feat worthy of praise despite defeat.

The 4-5 record that the Saints currently hold does not reflect just how impressive the team has been this season. However, football is a game of inches and those inches have unfortunately defined the Saints’ record to this point. They will have one last opportunity to finish the regular season at .500 as they go on the road to take on Baker High School. Baker sits just above the bottom of the district, having won only one game all season. It is not a game that the Saints should take lightly, but it is one that they should comfortably win.