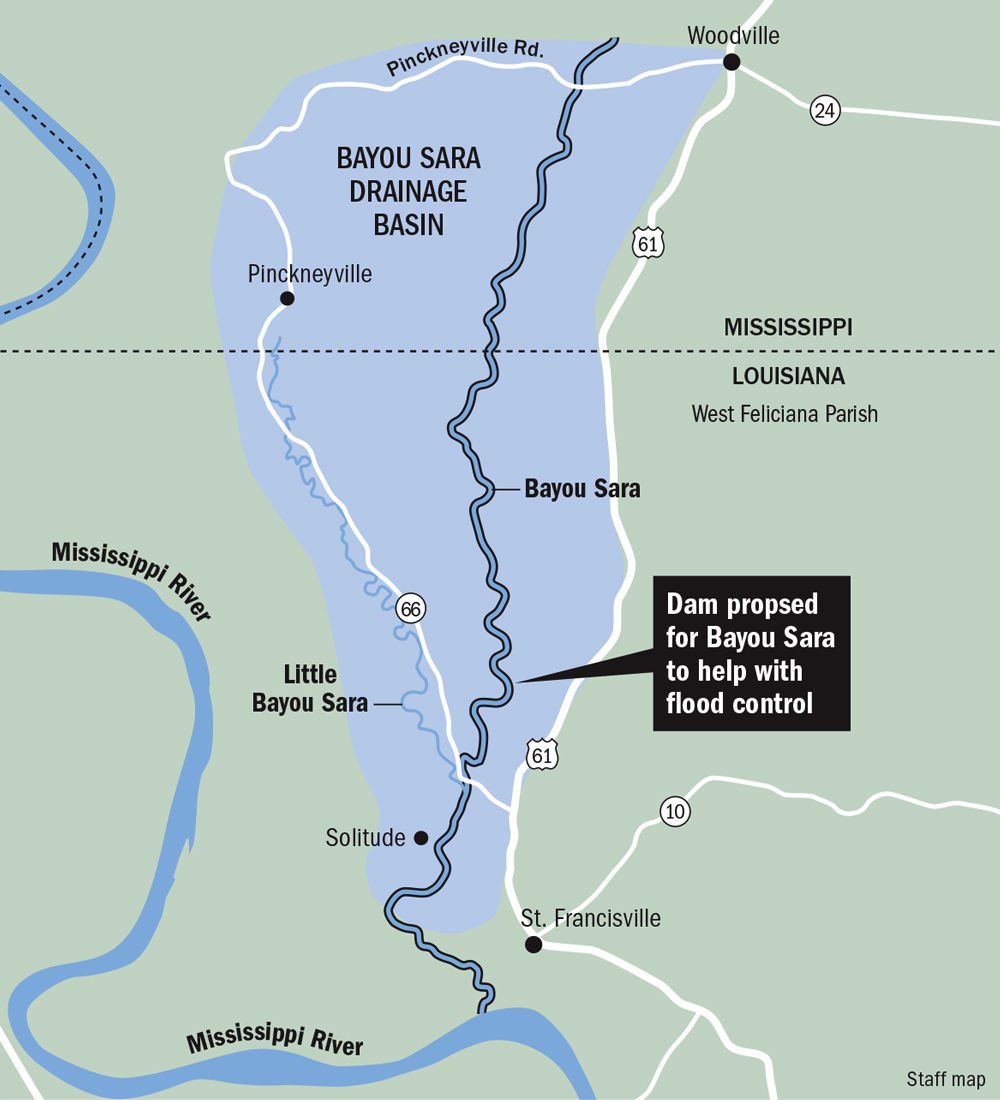 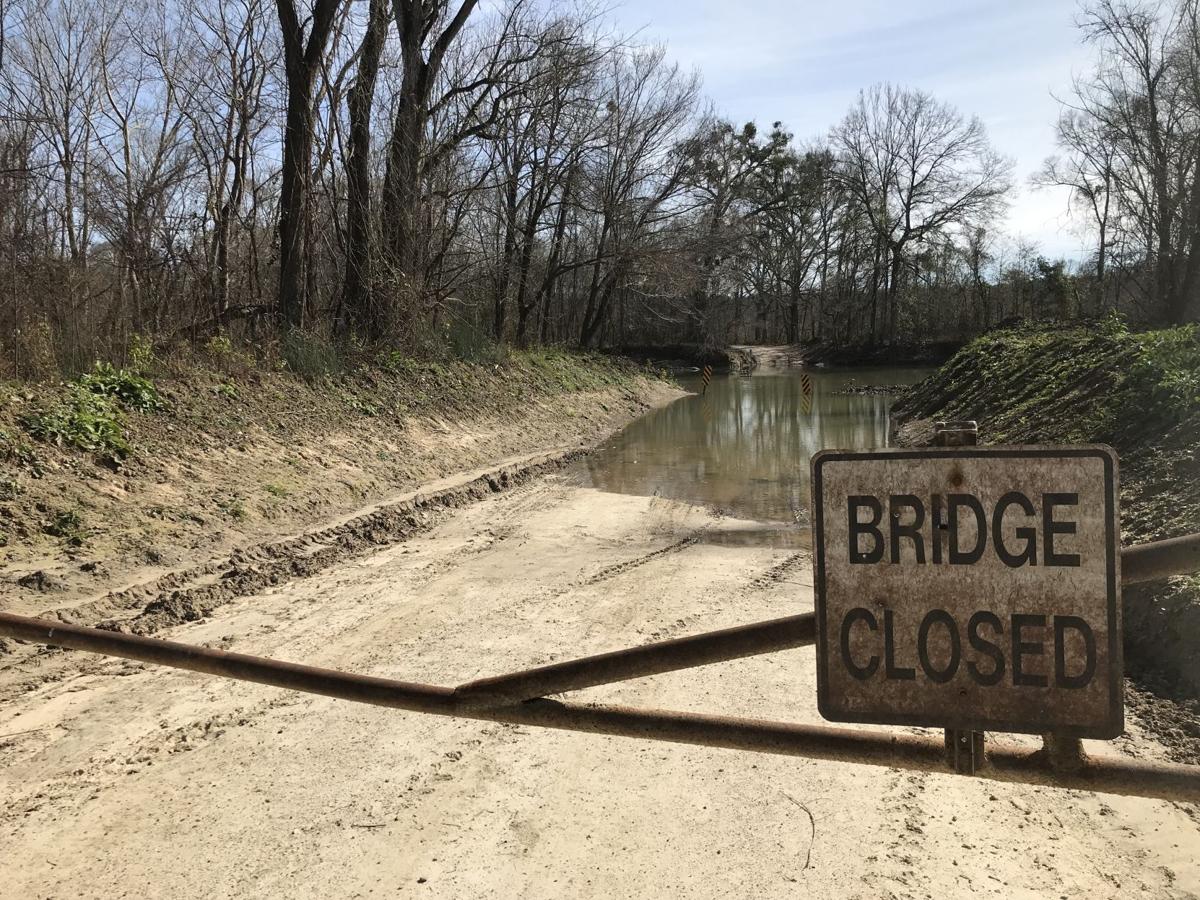 High water blocks the low-water bridge over Bayou Sara between St. Francisville and the community of Solitude in West Feliciana Parish Saturday, Jan. 25, 2020, as seen on Solitude Road along the west bank of the bayou. Parish President Kenny Havard is proposing a dam and reservoir project in Bayou Sara's watershed to improve flood control, protect groundwater and boost economic development. 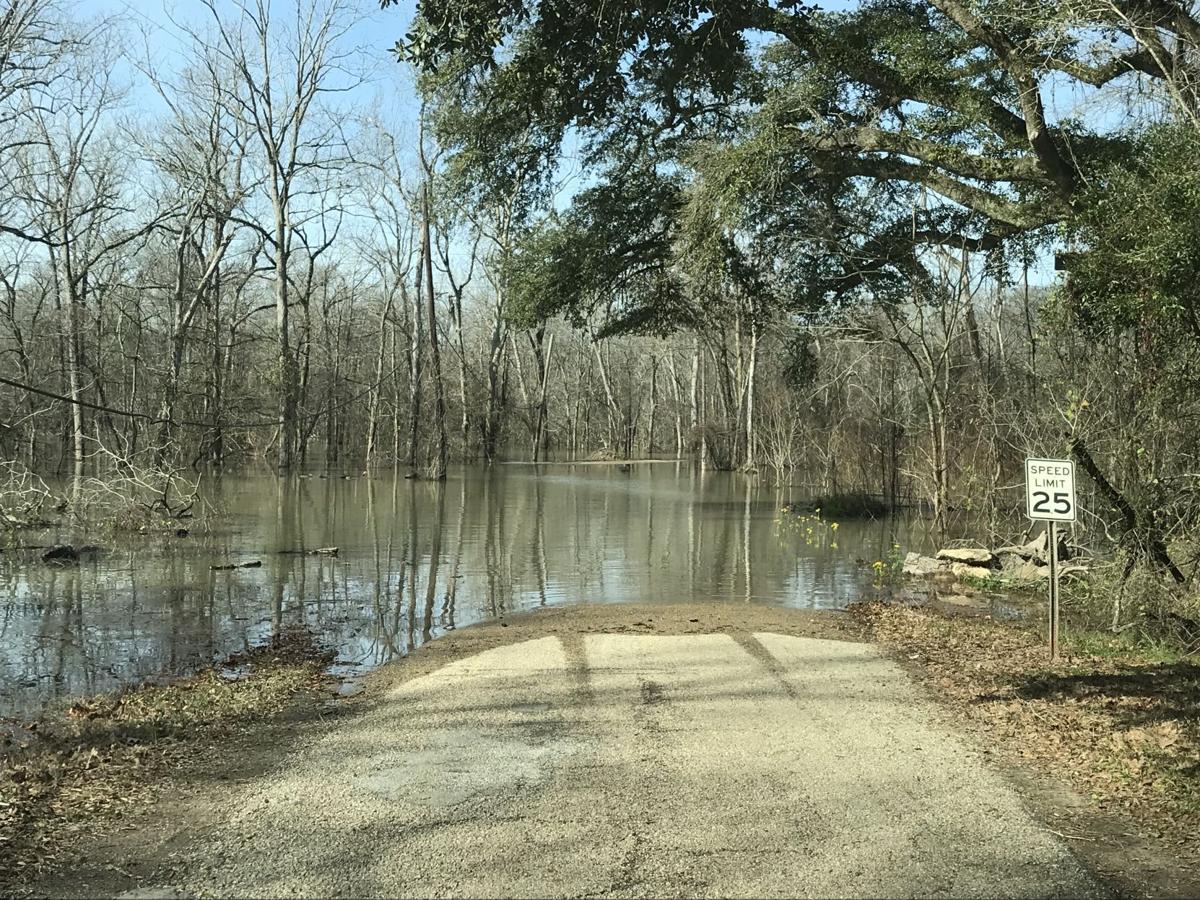 High water blocks Tunica Street near the old port of Bayou Sara along the Mississippi River and near St. Francisville on Saturday, Jan. 25, 2020. West Feliciana Parish President Kenny Havard is proposing a dam and reservoir project in the similarly named Bayou Sara watershed that he said will improve flood control, protect groundwater and boost economic development. The waterway known as Bayou Sara empties into the Mississippi and is susceptible to high water in the river.

High water blocks the low-water bridge over Bayou Sara between St. Francisville and the community of Solitude in West Feliciana Parish Saturday, Jan. 25, 2020, as seen on Solitude Road along the west bank of the bayou. Parish President Kenny Havard is proposing a dam and reservoir project in Bayou Sara's watershed to improve flood control, protect groundwater and boost economic development.

High water blocks Tunica Street near the old port of Bayou Sara along the Mississippi River and near St. Francisville on Saturday, Jan. 25, 2020. West Feliciana Parish President Kenny Havard is proposing a dam and reservoir project in the similarly named Bayou Sara watershed that he said will improve flood control, protect groundwater and boost economic development. The waterway known as Bayou Sara empties into the Mississippi and is susceptible to high water in the river.

ST. FRANCISVILLE — West Feliciana Parish President Kenny Havard, who came into office a little more than a year ago promising to focus on infrastructure, is making early inquiries about a major reservoir and dam project in the Bayou Sara watershed just west and north of here.

Havard wants to build one or possibly two dams on Bayou Sara and convert the wooded bottoms of West Feliciana's rolling loess hills and bluffs into as much as 5,500 acres of finger lake reservoir stretching into southwestern Mississippi.

Havard says the reservoir could be a boon for residential development along its miles of future shores, while the dam would still allow some water to pass over a weir. He also argues it would improve flood control in low areas along Bayou Sara and create a new water source that, perhaps, could take stress off the Southern Hills aquifer that provides drinking water.

"It's kind of a win-win-win for everybody," Havard said in an interview.

He said the proposed lake would be somewhat bigger than False River, a natural oxbow lake in New Roads, but with similar development and recreational potential.

The concept doesn't have a definite source of funding, a cost estimate, rough preliminary plans or much profile even in Havard's home parish — but he has produced a slick handout promoting the idea's selling points as he seeks input.

Havard, a former legislator for the area who won a special election for parish president in the fall of 2018, said he has been working behind scenes for a few years with the idea, including with former Parish President Kevin Couhig.

But Havard recently began reaching out to people and groups for feedback, including the Water Institute of the Gulf and the Capital Area Ground Water Conservation Commission.

"We don't have a time frame right now. It's very early stages. We're throwing it out there to see if it sticks to the wall and if people like it," he said.

Havard said that while Gov. John Bel Edwards' post-2016 flood Louisiana Watershed Initiative is something the parish is looking at, other "off-the-shelf" sources of federal money could finance the project. Havard didn't offer any details.

The Bayou Sara watershed covers 120,000 acres in West Feliciana Parish and Wilkinson County, Mississippi, and empties into the Mississippi River near St. Francisville.

This junction was once home to a bustling, mid-19th century port also known as Bayou Sara. The sandy-bottomed waterway lined with wooded bluffs is home to the rainbow darter fish and a popular area for canoe and kayak enthusiasts.

Having a smoke on the patio of St. Francisville's popular Birdman Coffee and Books Saturday morning, longtime resident Christian Morrison, 62, hadn't heard about the dam idea yet. But he said, on first look, he liked the idea — as long as it didn't mean major displacement for landowners in the area.

"Overall, I think it would be a good project as long as it wouldn't upset too many people," he said.

Havard has said that preliminary analysis of the reservoir's possible footprint shows about 14 landowners have property that would have to be bought.

Morrison, who is semiretired, said he spent a lifetime doing landscaping and dirt work and serving as an arborist, and wondered about the soils under the foundation of the future dam and reservoir.

He said that his experience is that underneath the stiff clay in the area are very sandy soils that allow water to drain into the ground quickly.

One of the benefits Havard sees in the dam is flood control for low parts of Solitude and Turner, communities of largely poor and black residents on the west bank of the bayou. With its mouth at the Mississippi River, Bayou Sara is susceptible to high water from the river.

In the project's promotional booklet, Havard has a copy of an October 2016 letter from a then-West Feliciana Parish public works official saying that the areas are in a drainage bottleneck and suffer from flooding problems when heavy rains in the upper watershed combine with backwater flooding from high water on the Mississippi.

Chronic high water on the Mississippi in recent years has meant the low-water bridge over Bayou Sara along Solitude Road is often blocked, as it was Saturday with rising water in the river. The bridge is a direct link from Solitude to St. Francisville. When the bridge is flooded, drivers must go north to La. 66 and turn back on U.S. 61 to reach St. Francisville.

Parish Councilman Melvin Young, who represents the area, said he wasn't yet aware of the project and wasn't sure how the dam would halt backwater flow from the Mississippi, which he said was the major flood problem in that area.

Young said he wants to learn more about the idea first and hopes to be part of any committee or working group that Havard may form to explore the concept.

The exact location of the dam or dams isn't clear from the presentation materials.

On Saturday, several residents living on bluffs in the Solitude area said their part of the community doesn't flood, though the low water bridge a few miles away is often out. None who commented had heard of the dam or offered to give their names.

Havard and John S. Kean IV, who has helped Havard develop the plan, made a pitch last week to the groundwater commission in Baton Rouge as a way to help chronic salt water intrusion in the region's key drinking and industrial water source.

During that talk on Tuesday, the men discussed the possibility of the using some of the reservoir water to inject back into the aquifer in a bid to halt salt water intrusion that threatens parts of the aquifer farther south. But some commissioners suggested that kind of plan might require water treatment first.

Kean said early calculations show just one foot of surface water in the lake would be between 1.2 billion to 1.8 billion gallons of water and believed the reservoir would have enough to supply industrial users. Havard is already proposing to treat the reservoir water and sell it for a residential supply.

Patrick Courreges, spokesman for the state Department of Natural Resources, said any direct injection of lake water into the Southern Hills aquifer would likely draw close scrutiny from a number of agencies.

The injected water must have a quality at least as good as what is in the aquifer now. Also, injection pressures would be closely watched to ensure they don't crack open the clay layers that now seal off and protect the aquifer's various water-bearing sources from outside contamination, including possibly further salt water intrusion.

“It wouldn’t be a two-day turnaround,” Courreges said.