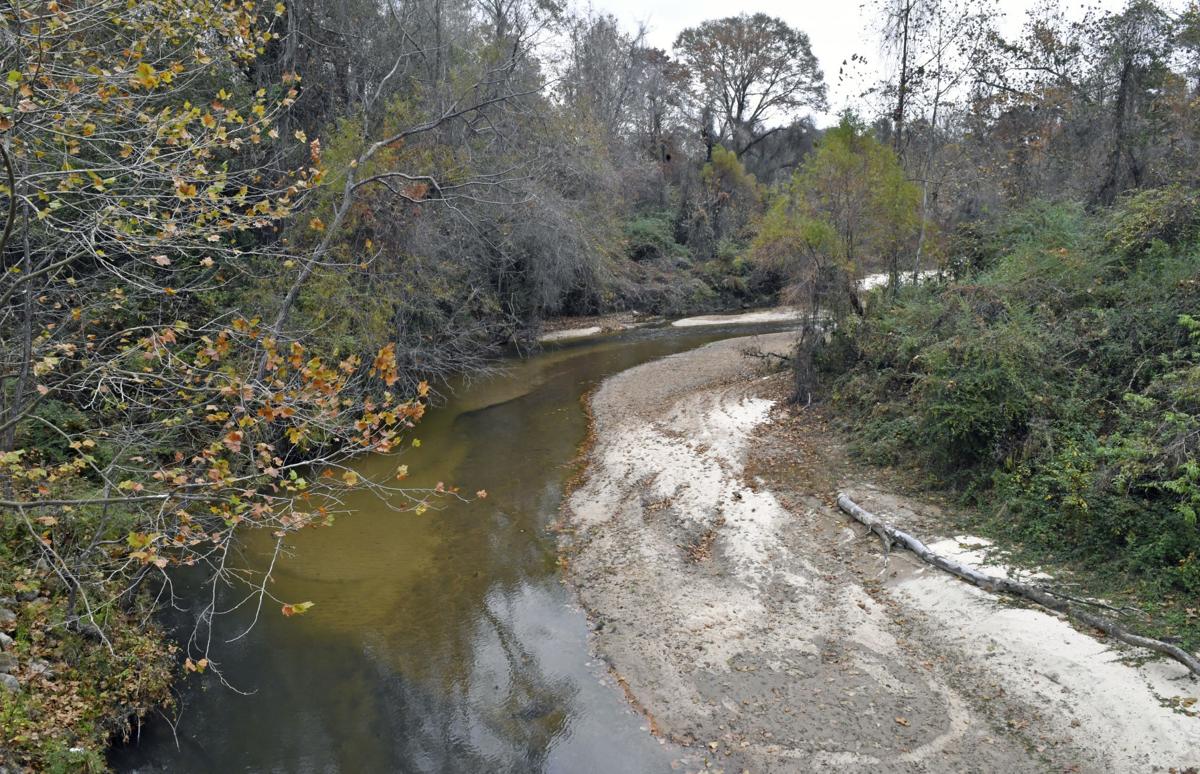 Darling Creek flows beneath Otis and Willie Matthews Road on Tuesday, November 26, 2019, in Darlington, La. Portions of this creek, which flows into the Amite River downstream, would be temporarily flooded if a proposed U.S. Army Corps of Engineers dam were built south of this area in St. Helena Parish. 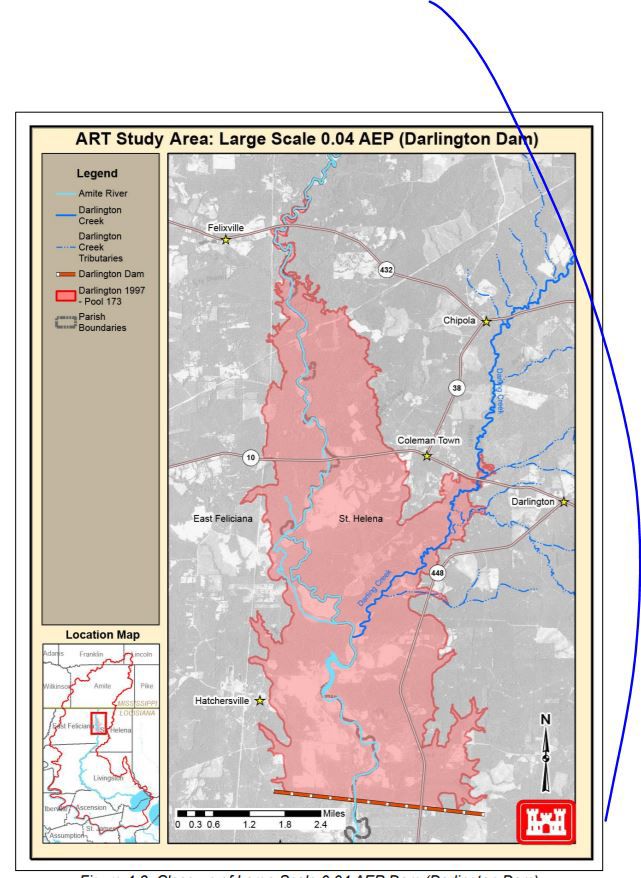 The pink area designates more than 26,000 acres in East Feliciana and St. Helena parishes that would be affected by periodic, intentional flooding if the Darlington Reservoir were built. The U.S. Army Corps of Engineers project would create a $1.3 billion dry dam across the Amite River northeast of Baton Rouge that would only be closed in times of heavy flooding. The area closely matches that outlined in a 1997 report on the dam project. 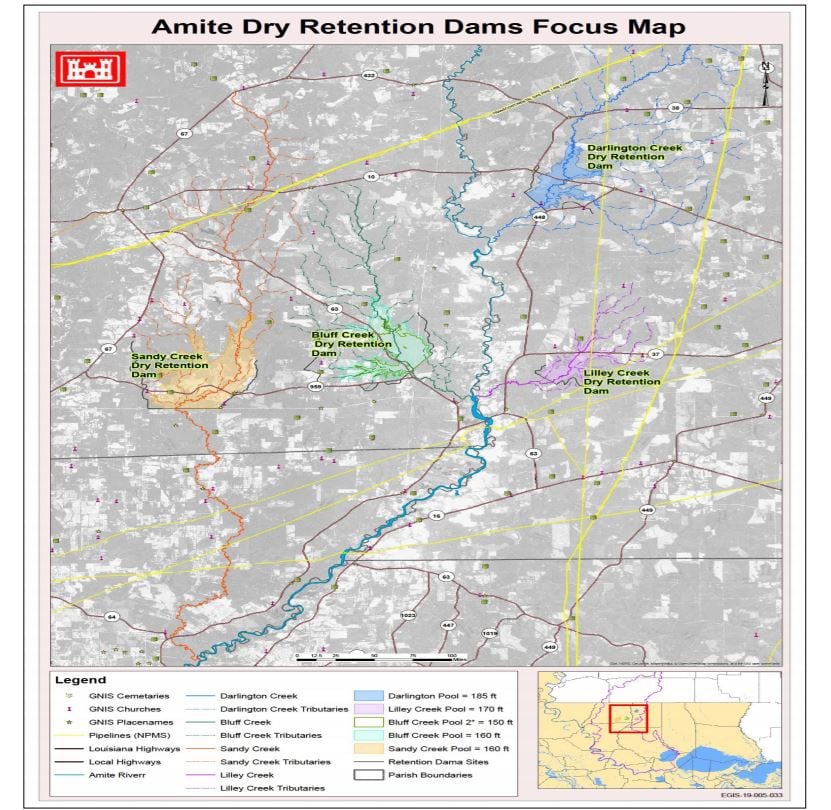 The U.S. Army Corps of Engineers has recommended a $1.3 billion "dry" dam known as the Darlington Reservoir to improve flood protection in the Amite River Basin. The Corps also looked at four smaller dam and reservoir ideas for tributaries that feed the Amite but found they weren't cost-effective or didn't yield as big of a benefit as the larger reservoir. 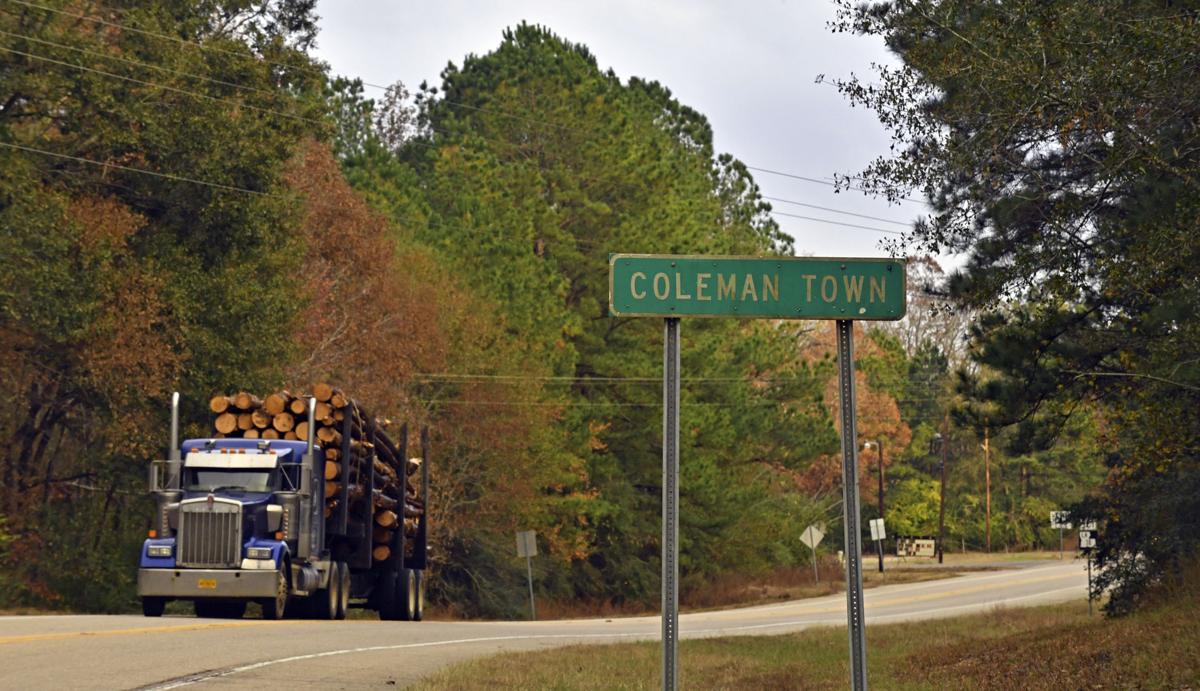 A log truck rolls down La. 10 in St. Helena Parsh at the start of Coleman Town, Tuesday, November 26, 2019. Thousands of acres that would be temporarily flooded if a dam proposed south of La. 10 along the Amite River is built would surround this community but not flood it. 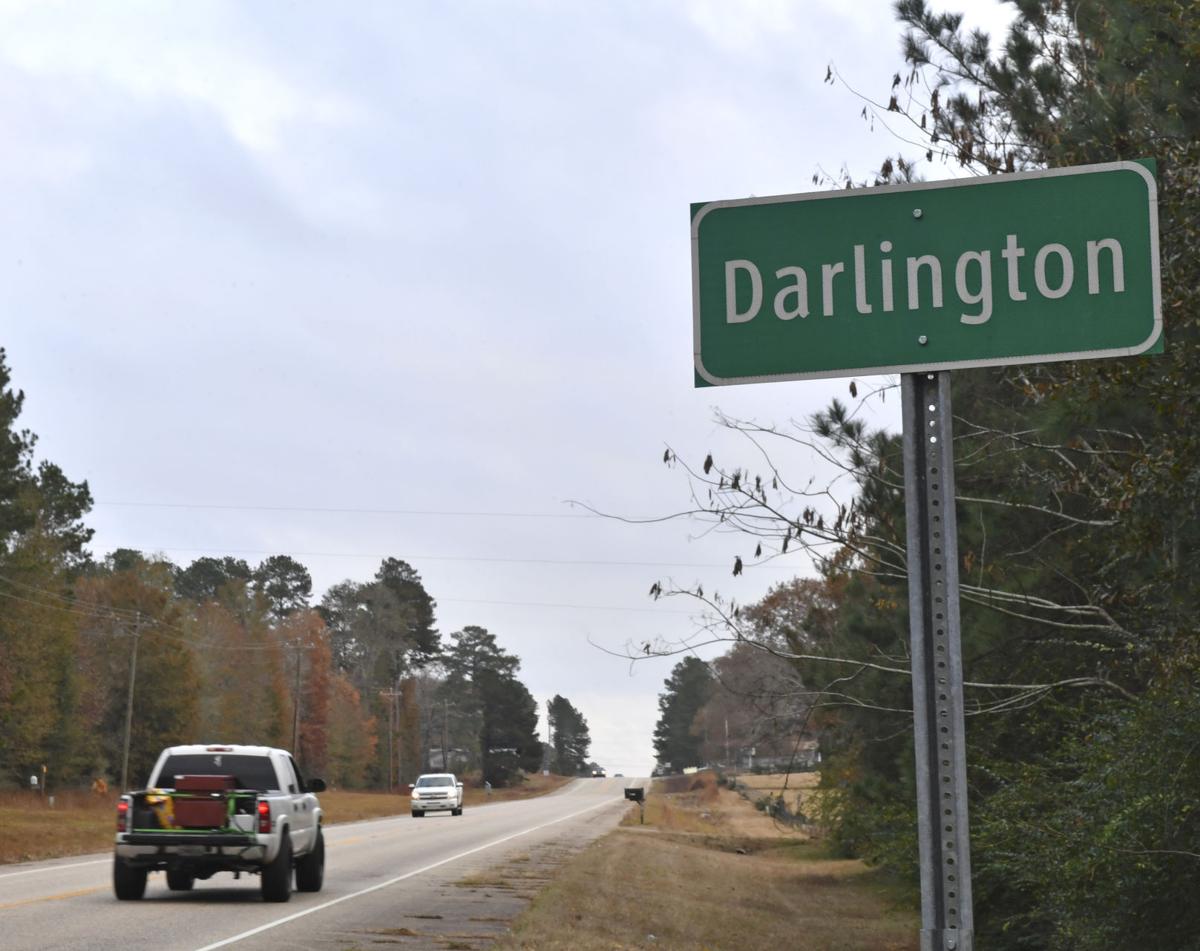 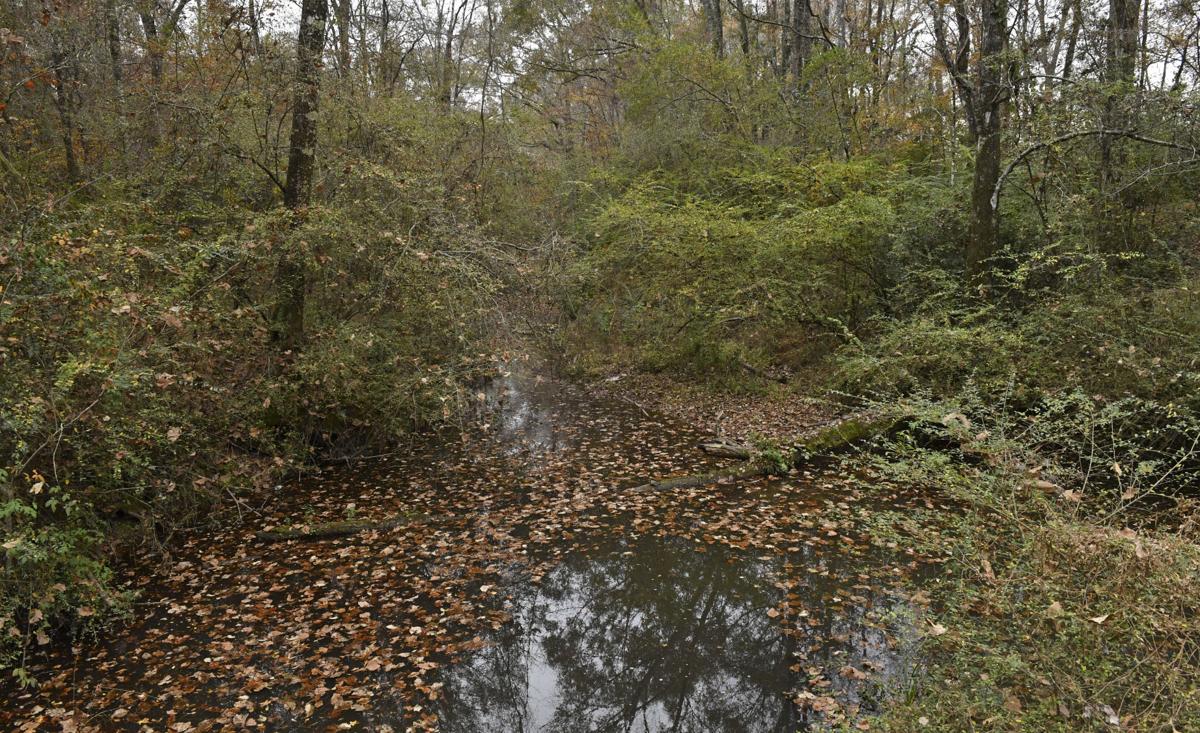 Darling Creek flows beneath Otis and Willie Matthews Road on Tuesday, November 26, 2019, in Darlington, La. Portions of this creek, which flows into the Amite River downstream, would be temporarily flooded if a proposed U.S. Army Corps of Engineers dam were built south of this area in St. Helena Parish.

The U.S. Army Corps of Engineers has recommended a $1.3 billion "dry" dam known as the Darlington Reservoir to improve flood protection in the Amite River Basin. The Corps also looked at four smaller dam and reservoir ideas for tributaries that feed the Amite but found they weren't cost-effective or didn't yield as big of a benefit as the larger reservoir.

A log truck rolls down La. 10 in St. Helena Parsh at the start of Coleman Town, Tuesday, November 26, 2019. Thousands of acres that would be temporarily flooded if a dam proposed south of La. 10 along the Amite River is built would surround this community but not flood it.

DARLINGTON — With his carport set aside for sawing wood, Malcolm Lee banged around inside his deceased granddad's former house recently, restoring the old family home from the floods of August 2016 that had sent more than 3 feet of water inside.

Down a gravel road from a former chapel and cemetery that also flooded, Lee's future home and the adjacent home of his parents are in the heart of more than 26,000 acres in St. Helena and East Feliciana parishes proposed for periodic, intentional flooding if a $1.3 billion U.S. Army Corps of Engineers dam is built.

The Darlington Reservoir, which would displace the Lees, was conceived as one piece in a two-pronged response after a major flood in 1983. The other, the Comite River Diversion Canal, is now under construction.

The latest version of the proposed Darlington Reservoir would put a dam on the Amite River nearly 5 miles to the south of the Lees' homes near the Coleman Town and Darlington communities in western St. Helena.

Last week, the Corps of Engineers issued the first draft of a feasibility study — relying heavily on a 1997 agency report — that recommends building an 86-foot-high, largely earthen "dry" dam slicing 3.6 miles across the forested bottom lands of the Amite River Basin.

The structure wouldn't permanently block the river and form a lake, as once was proposed, but instead would be used to regulate and hold back river flow in times of heavy rains. Most of the time the area within the boundaries of the dam would remain dry.

Covering an area that's is almost half the size of Baton Rouge's corporate limits but with just 4,275 people, the dam's 26,000-acre flood footprint would affect an estimated 700 landowners and require the buyout of about 365 structures.

Online maps and a recent visit to the area indicate that at least some sand and gravel operations along the Amite could be affected along with thousands of acres of timber land.

Lee recognizes that he could be caught in the future reservoir's cross-parish footprint. But like a handful of other St. Helena and East Feliciana residents who were interviewed, he's skeptical of it coming to pass given the price tag of the massive project and it's long, unfruitful history.

Still, he expressed some openness to leaving if it ever comes to that.

"I'd rather just like stay here and live here or whatever because that's where I grew up, but, at the bottom line, it'd probably have to be a … better than fair price, then I'd agree to it," said Lee, a 38-year-old who makes his living managing a drive-in fast-food restaurant and doing dirt work.

Local officials in areas downstream offered a mix of reactions. Those in East Baton Rouge said they were still evaluating the Corps' report. Others farther downstream voiced concerns that the dam would use up a $1.2 billion allocation from the U.S. Department of Housing and Urban Development for post-'16 flood improvements at the expense of other projects.

"I’m afraid this project is going to take all of the money but yield very little benefit to Ascension Parish," outgoing Parish President Kenny Matassa said. "The Darlington project is extremely expensive, and under current Corps of Engineers funding scenarios, the start of construction would be many years away."

The dam's supporters said they'd push for the state Department of Transportation and Development to build the project as soon as possible under a plan they say would cost a small fraction of the Corps' $1.3 billion estimate, arguing the project still presents the biggest bang for the flood-protection buck.

"We've been given a historical amount of money from the federal government to fix our problem and, if we go around wasting that money on stupid feasibility studies, more feasibility studies, more listening tours, studying mosquitoes and frogs, that's criminal to me," said state Rep. Valarie Hodges, R-Denham Springs. "We know what needs to be done. DOTD knows what needs to be done."

The Corps latest analysis, which also looked at and rejected ideas for smaller dams and other flood protection proposals, estimates the larger dam concept would reduce Amite River levels at Denham Springs by 6 feet and at Port Vincent by 2.5 feet in a 100-year flood. That's a flood that has 1% chance of happening in any year.

Through the '80s and '90s and with vocal support from then-Gov. Edwin Edwards, the dam and a then-proposed permanent reservoir were dogged with questions about cost-effectiveness. Critics alleged it was a real estate scheme to cash in on the recreation potential of a future lake.

A 1992 Corps analysis found both the "wet" and "dry" dam concepts would cost more to build than the expected benefit. The 1997 Corps reanalysis trimmed costs and found a positive benefit for the dam, but the idea lost steam until the historic 2016 floods revived talk about Darlington.

The latest iteration of the plan includes not only home buyouts from the dam but an additional $1 billion program to elevate or buy out another 3,252 homes and to flood-proof 314 nonresidential structures, bringing the combined cost to $2.3 billion. The Corps now says the combined plan provides $1.20 in benefits for every dollar spent.

In a news release about the feasibility study, the Corps described the dam's "flood pool," or main reservoir area, as 12,600 acres. But the report itself shows the lands that could be flooded cover more than double that number of acres.

The report says 15,860 acres will need to be purchased and another 10,309 acres would need "flowage easements" placed on them so the agency would have the right to flood that land as well.

Matthew Roe, a corps spokesman, explained that the 12,600 acres described in the press statement is the primary pool "that will hold water for slowed release during a flood event."

The Corps' report says the now closed Darlington Church of God in Christ chapel and a connected cemetery down the street from the Lees will need to be relocated or bought out. But it's not clear from the report what option the Corps will pursue with the homes and land of Malcolm Lee, his parents or most other property owners.

Just down the road from the Lees, Bill Brown, 48, a Baton Rouge resident, was dressed in full camouflage and preparing to head to his deer stand for a late afternoon hunt recently. He said his extended family owns land on both sides of nearby Darling Creek.

He is opposed to having to sell or provide easements.

Brown asserted that with the dam, the state and other government officials would be penalizing upstream landowners for their past drainage errors downstream, including the concrete dividers on Interstate 12 that some Livingston Parish residents and officials have blamed for severe flooding in 2016.

He said state and other government officials  messed up on drainage and by putting dividers in the highway that held water on one side of the interstate.

Under a sample easement agreement, the Corps would be given title to all timber, structures and improvements on the privately held land, the right to clear the land where needed and authority to prevent the future maintenance or construction of structures used for "human habitation."

The Corps could grant exceptions for structures not built for human habitation.

The Rev. Frederick Skinner, pastor of Darlington Church of God in Christ, said his church sold the chapel after the 2016 flood but still owns the cemetery. He said he had only heard recently about the dam and wanted to talk with his members before commenting further.

News of the reservoir hadn't penetrated far elsewhere in St. Helena. Last week police jurors met in Greensburg and heard from upset landowners and timber company officials about a proposed hike in permit fees. The reservoir didn't come up.

Some offered mixed assessments of how parish residents and industries would greet the dam's revival.

Joe Morgan, president of the St. Helena Forestry Association, said the area eyed for flooding doesn't constitute the core of the parish's logging industry but has some stands. He added the area has many large landowners who may resist the plan.

"Once it gets out, I think it's going to pick up some steam in this parish, man," said Morgan, 50, who remembers fights about the dam when he was in high school.

In the mid-1990s, the Police Jury adopted resolutions opposing further study of the dam, but Juror Jule Charles Wascom, who won a fifth term in a Nov. 16 runoff, said he wasn't sure the dam would generate too much opposition this time. Wascom, who represents part of the affected area, said people have bought land in hopes of selling it whenever the reservoir was built.

"I think everybody's going to have agreement to it, on my side," Wascom said.

For Malcolm Lee, a plan seemingly so far off in future won't be stopping the restoration of his granddad's house, he said.

He said he figures that work will just raise the home's value anyway, in case he ever does have to sell.

Editor's note: The name of Darling Creek was changed Dec. 5, 2019, to replace an incorrect creek name based on a U.S. Army Corps of Engineers report. The Corps says the name in the report is in error.

In St. Helena, answers on Darlington Reservoir are in short supply from local leaders

GREENSBURG — St. Helena Parish resident Jeremy Cornette, his wife, Christy, and others showed up Tuesday to ask the Police Jury what they've b…