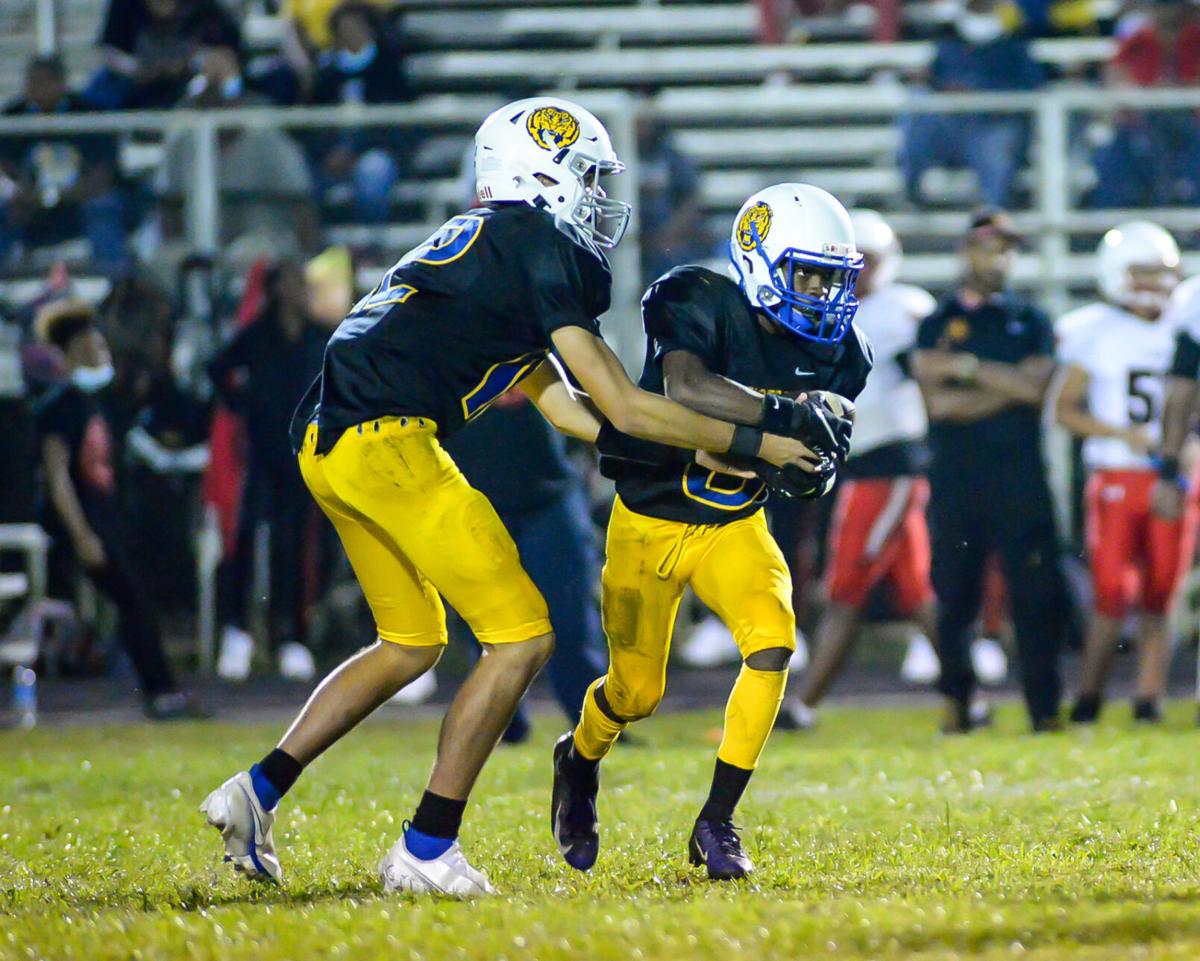 Tiger running back Tom Hayes takes a handoff from quarterback Mills Dawson. Hayes, who stepped in for the injured Chandler Wilson, helped the Tigers by scoring four touchdowns. 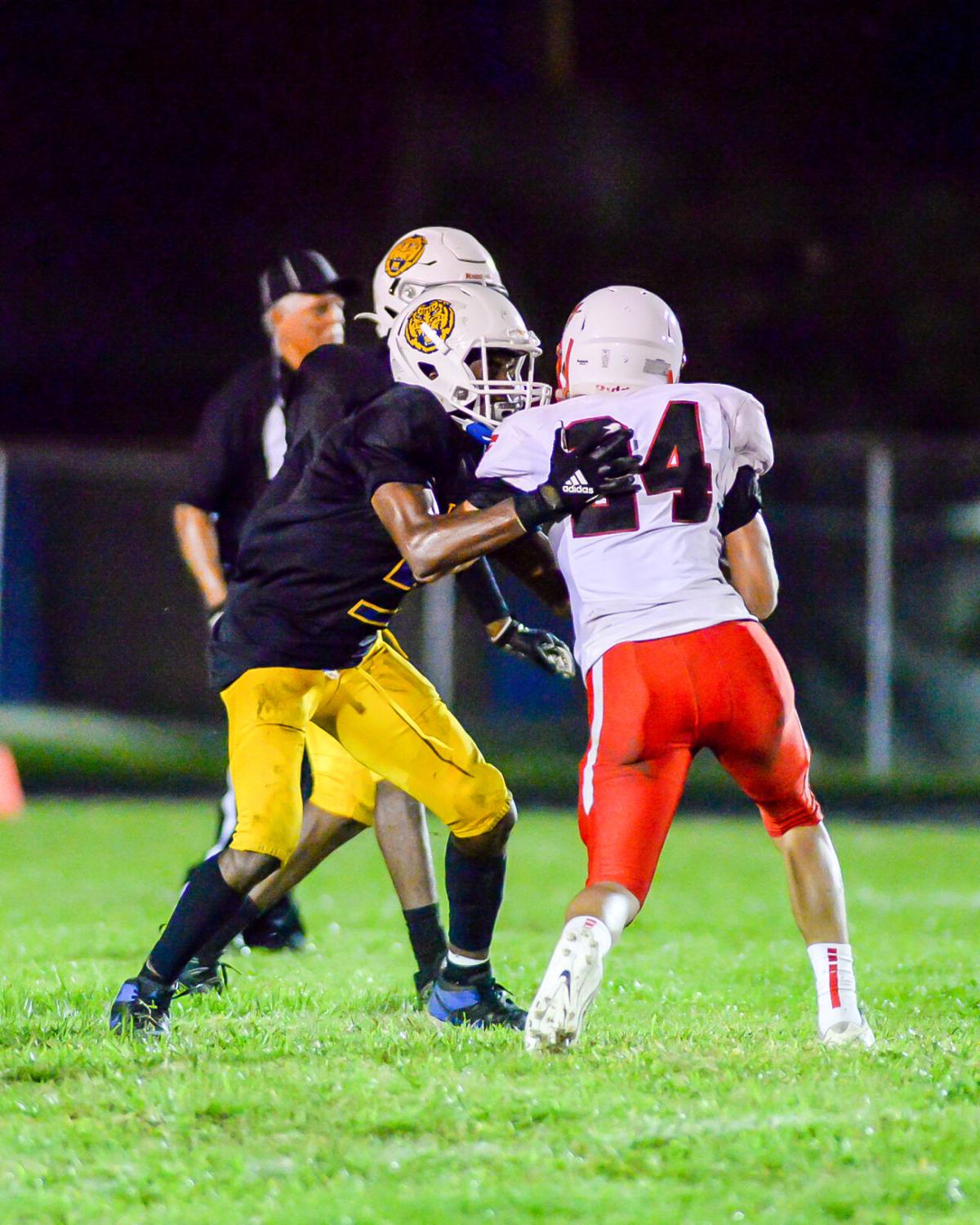 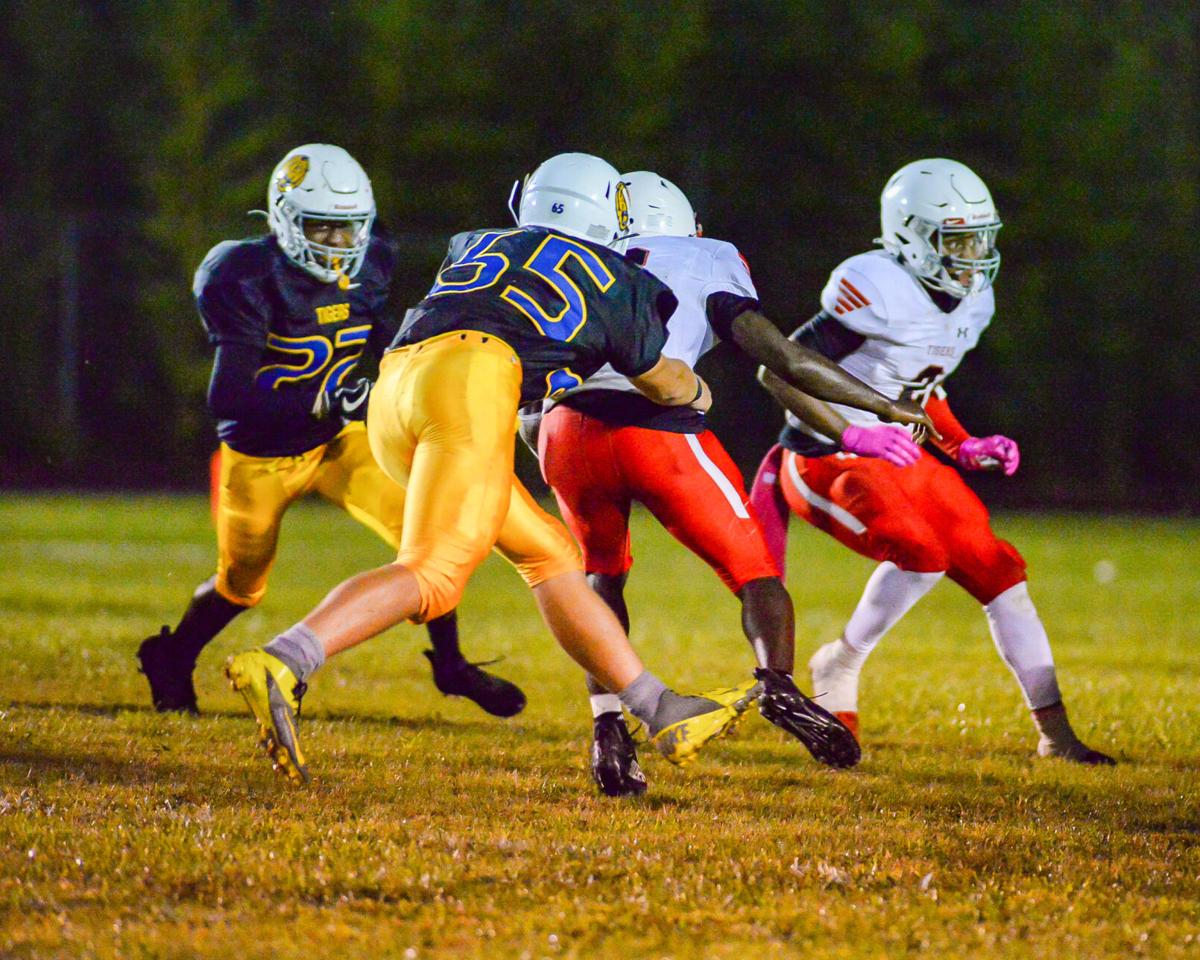 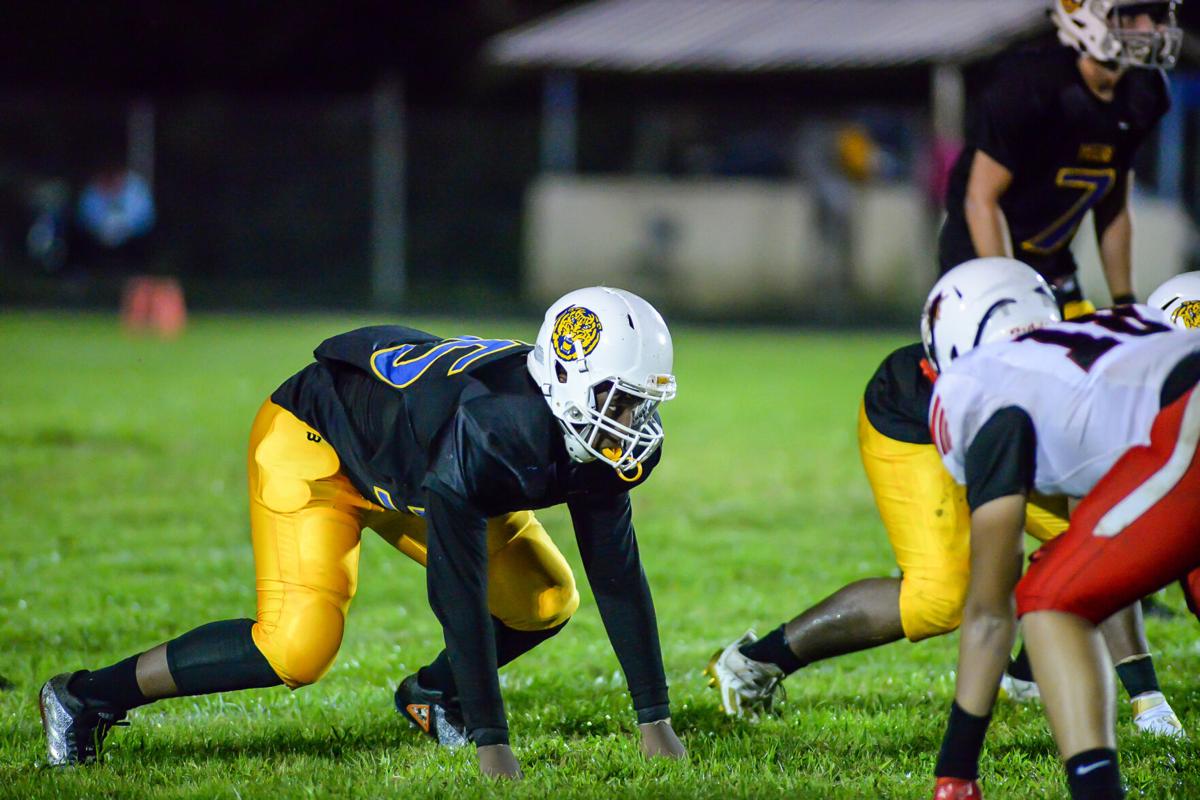 East Feliciana defensive lineman Robert Washington eyes his East Iberville opponent as he loads up to apply pressure on the opposing offense. 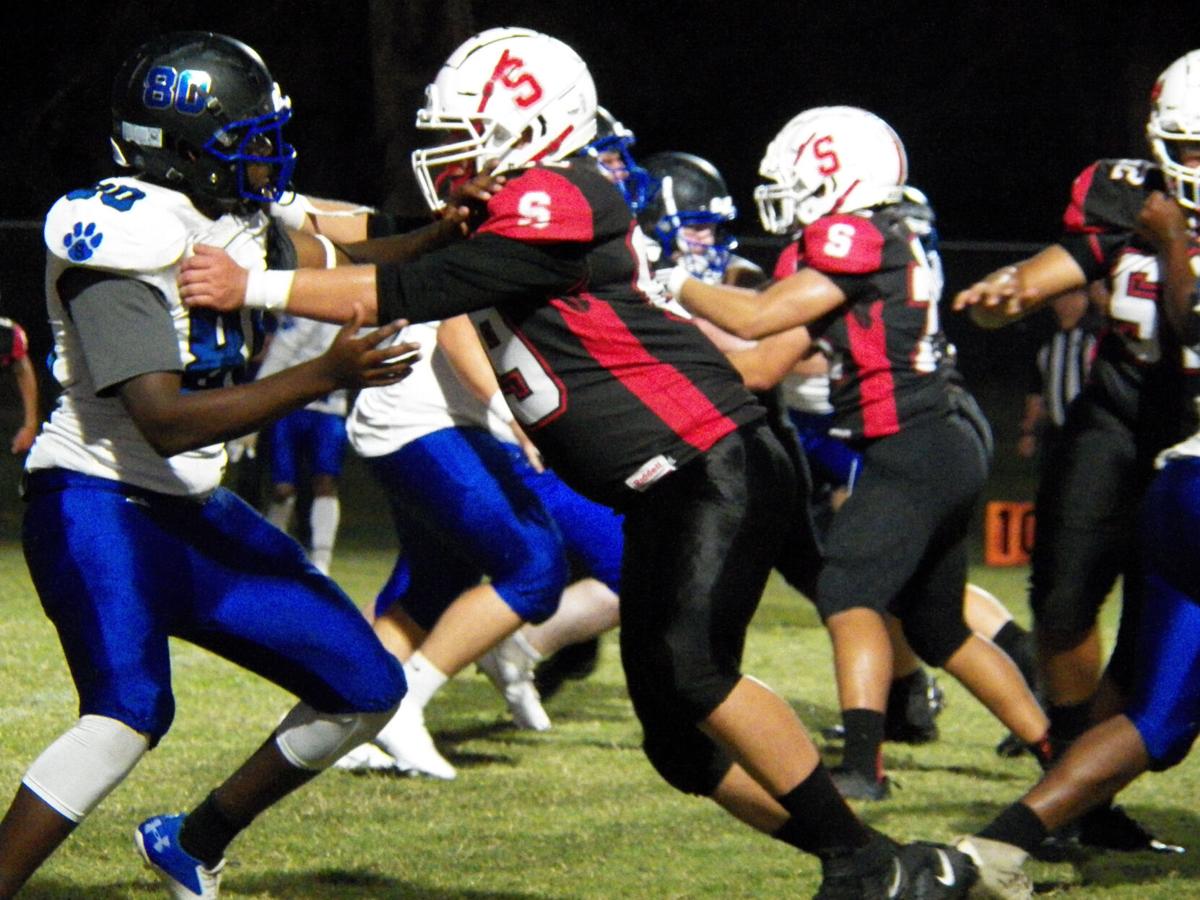 Tiger running back Tom Hayes takes a handoff from quarterback Mills Dawson. Hayes, who stepped in for the injured Chandler Wilson, helped the Tigers by scoring four touchdowns.

East Feliciana defensive lineman Robert Washington eyes his East Iberville opponent as he loads up to apply pressure on the opposing offense.

It was a rainy night in Natchez as Silliman took on Adams County Christian with hopes of spoiling the Rebels’ homecoming festivities.

This was not the case; Adams County dominated the game on all fronts. A huge pick six effectively ended the first half with the Silliman Wildcats down 30-0. An early third quarter touchdown saw Adams County go up by 36, leading to a running clock being instituted for a vast majority of the second half.

The Wildcats would go on to lose 42-0, dropping to 2-5 on the season just before the home stretch of district games to come.

Speaking of district games to come, Silliman will be back on the road Friday as it takes on Oak Forest Academy in the first of three district matchups that will close out the regular season.

West Feliciana fell at the feet of a massive second half comeback from the Parkview Baptist Eagles. It was the Saints who dominated a majority of the game, going into half time up 22-0 on the Eagles, but it was a story of two halves at Parkview.

Scoring its first points of the game off of an old-school fumblerooski play, Parkview followed up with a two-point conversion to make the score 22-8. The Eagles would go on to score an additional 15 unanswered points, going up on the Saints 23-22 with just two and a half minutes left in the game.

A valiant final drive by West Feliciana proved to be too little, too late as a 40-yard field goal attempt that would have won the game came up just short and wide. For the Saints, it is another in a string of frustrating losses that have marred an otherwise promising season to this point. Penalties had an effect on the game, but there were times in the second half where it felt as if the Saints just were not present on the field.

They will have a week to address these issues, but then it is back on the road as they will travel to Hammond Friday and take on St. Thomas Aquinas in the final nondistrict game of the season.

Elsewhere in the Felicianas, Slaughter Community Charter suffered its first loss of the season at the hands of Northeast High School. The final score in that game was 14-6 in favor of the Vikings. The Knights will have a couple of days to reflect on the loss, but then it is back to business. They will be back on the road Friday as they take on the Bulldogs of Thrive Academy in the first district matchup of the season.

The East Feliciana Tigers picked up a 38-0 win over East Iberville. With that, the Tigers move to 2-2 on the season as they prepare for a final stretch of district opponents. The first of those district games will be Port Allen. East Feliciana will host Port Allen on Friday, and that game will kick off at 7 p.m.