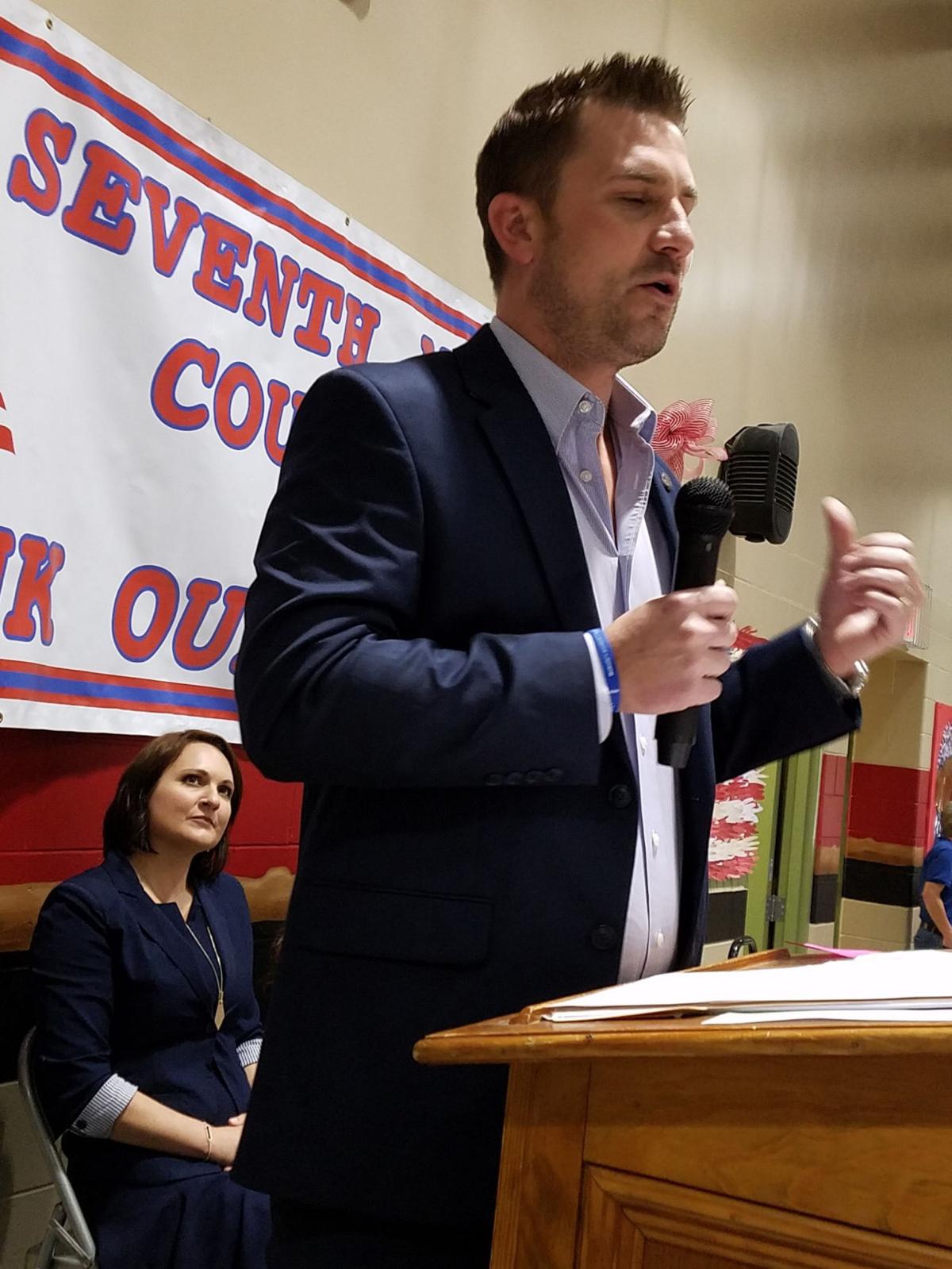 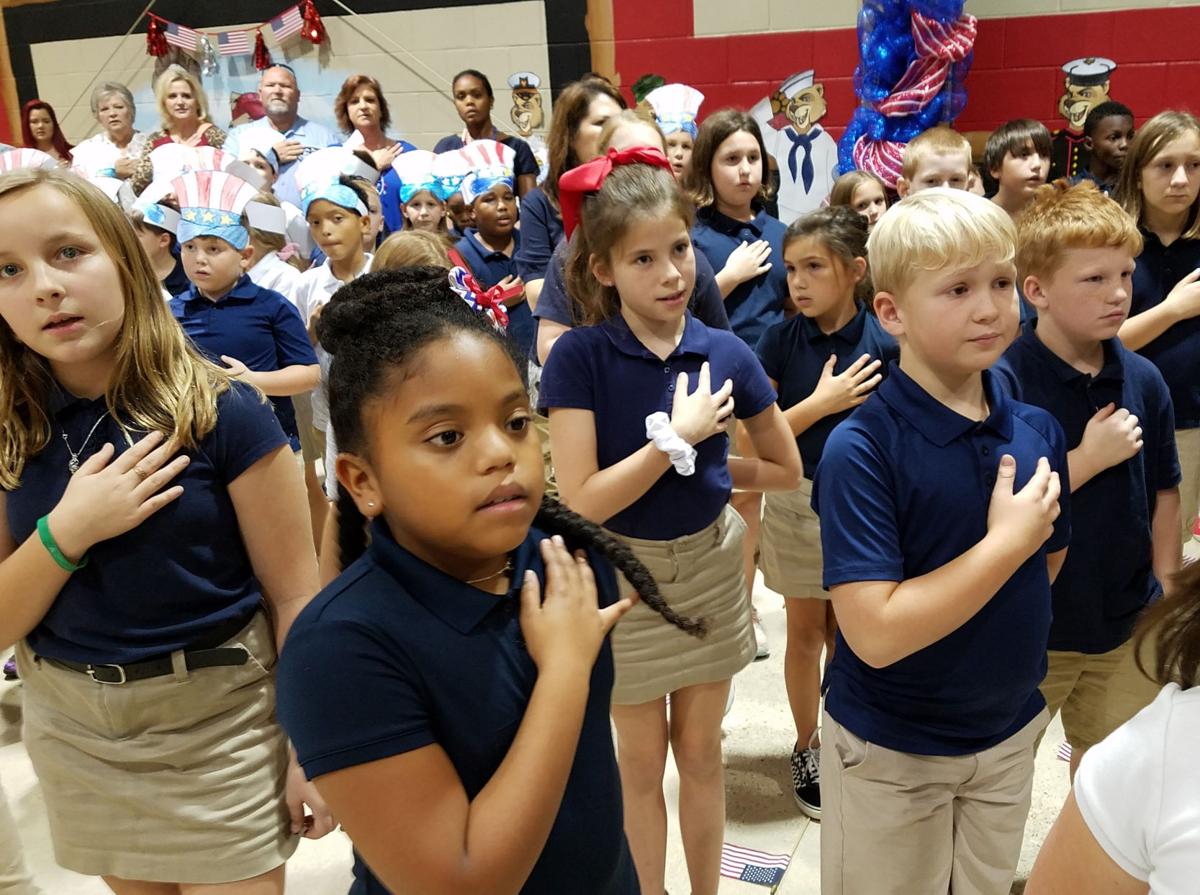 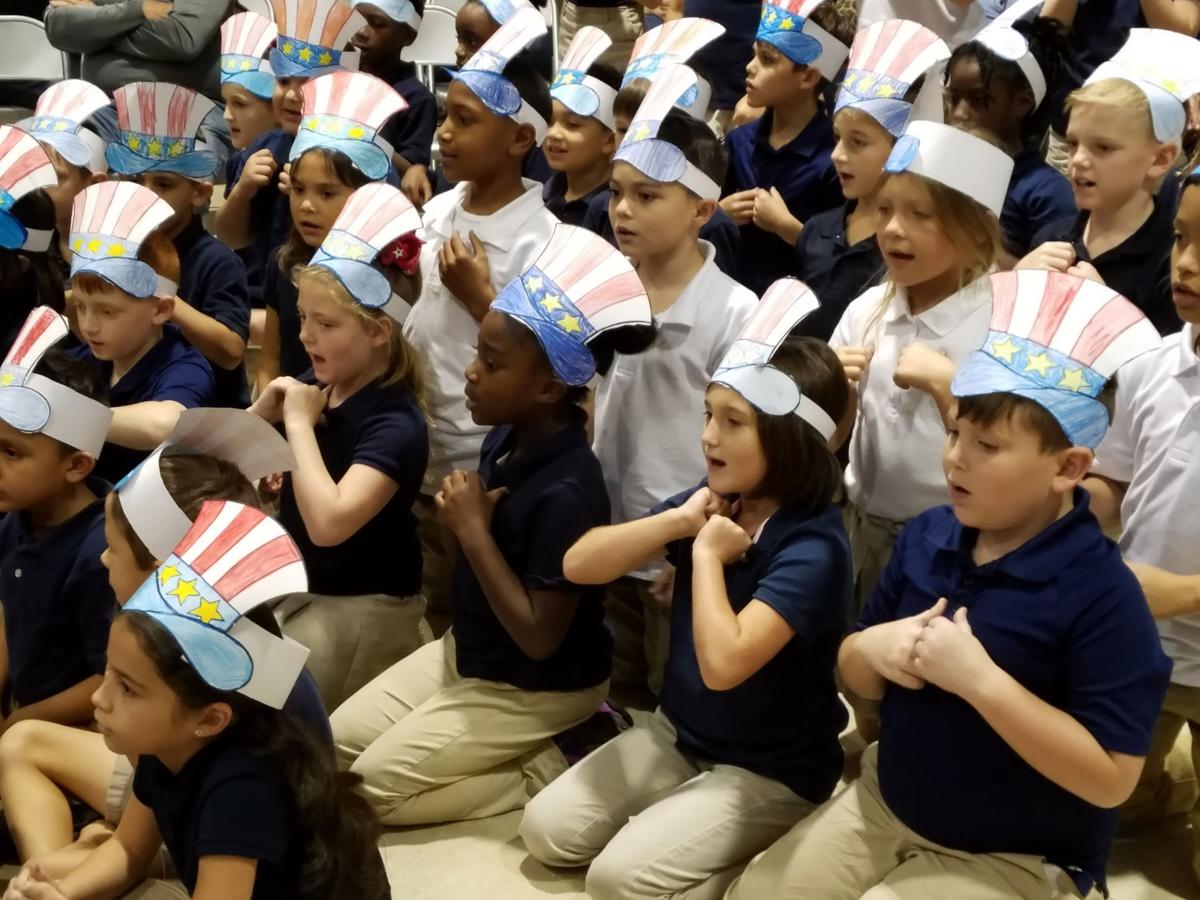 With their Uncle Sam patriotic hats in place, all that was missing from the second graders’ outfits were cotton swab beards during a Veterans Day program at Seventh Ward Elementary School. 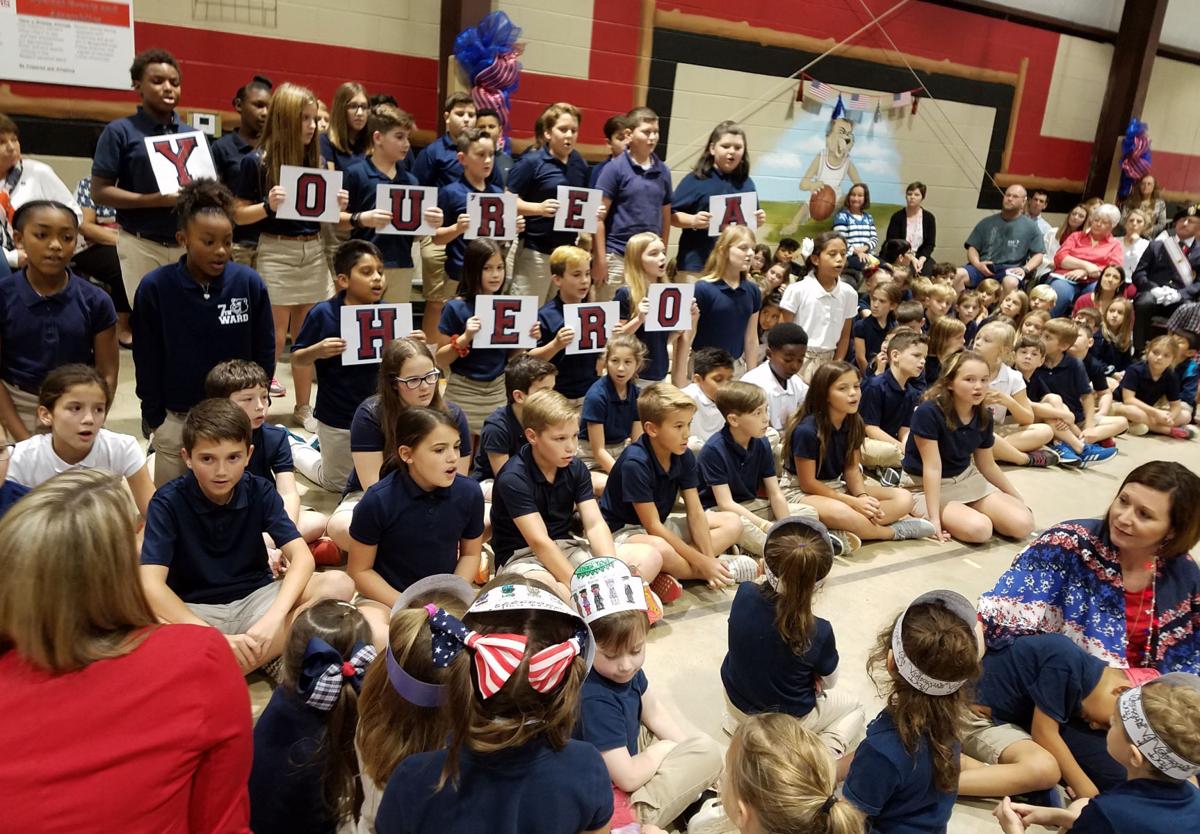 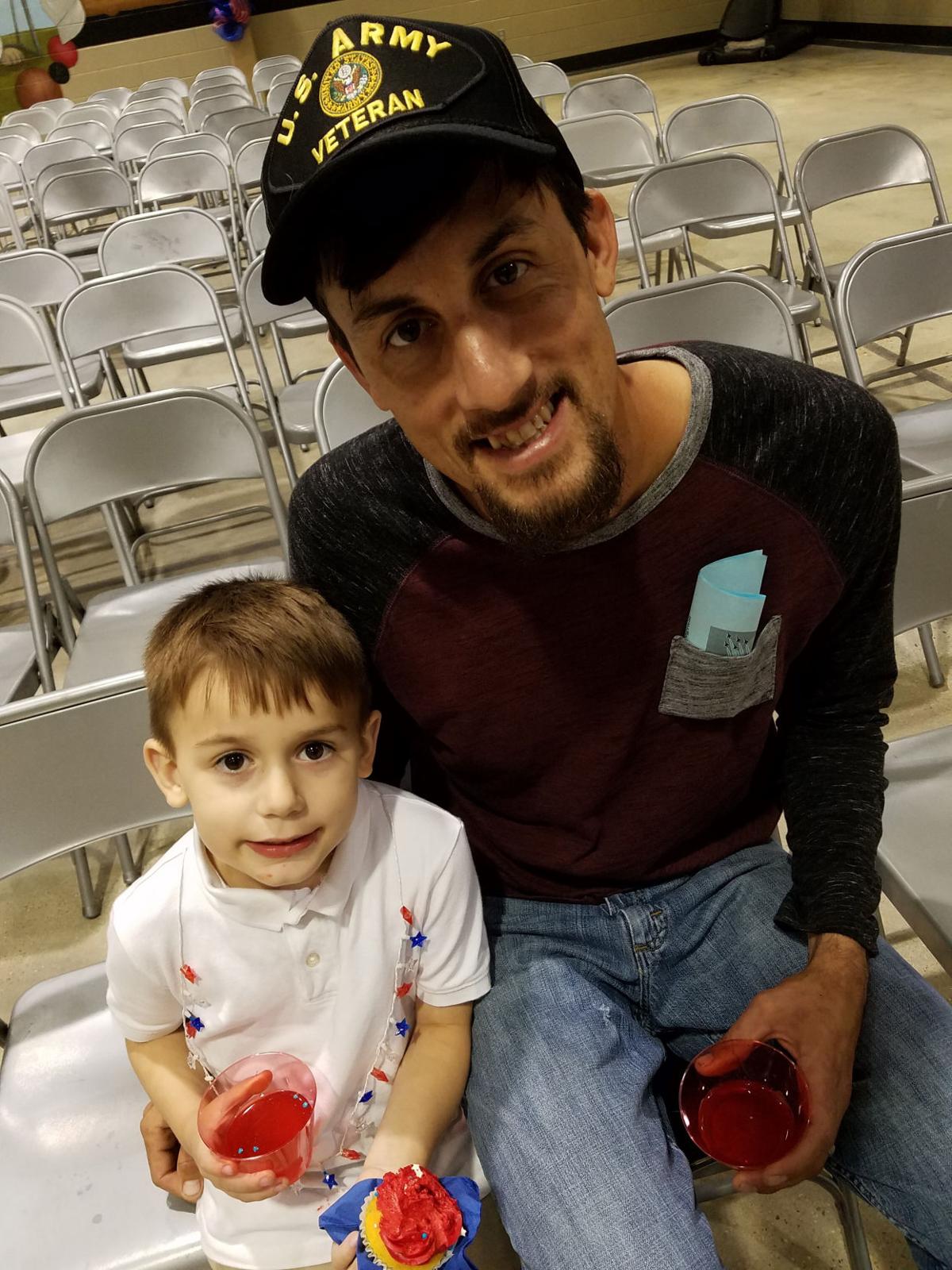 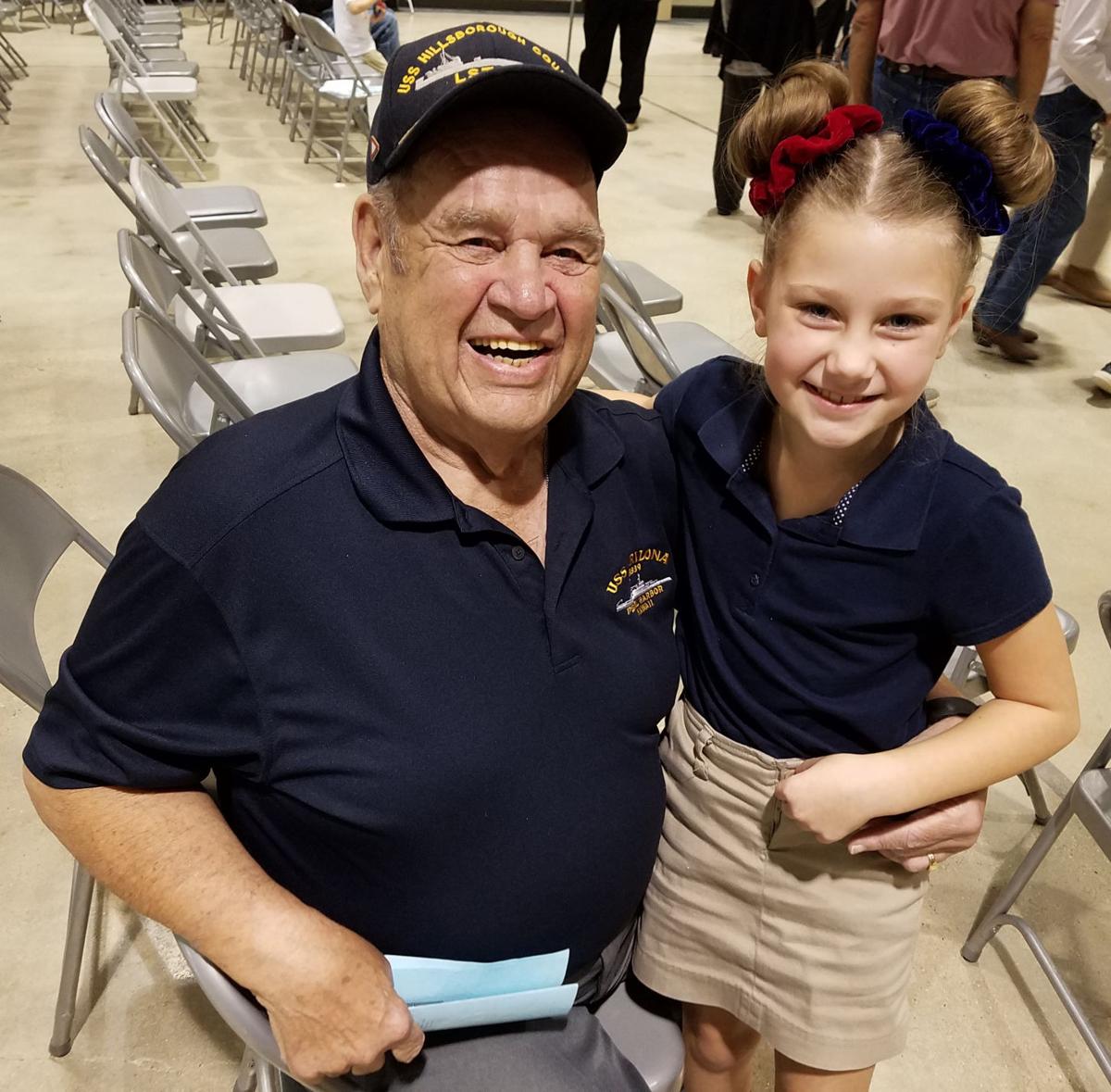 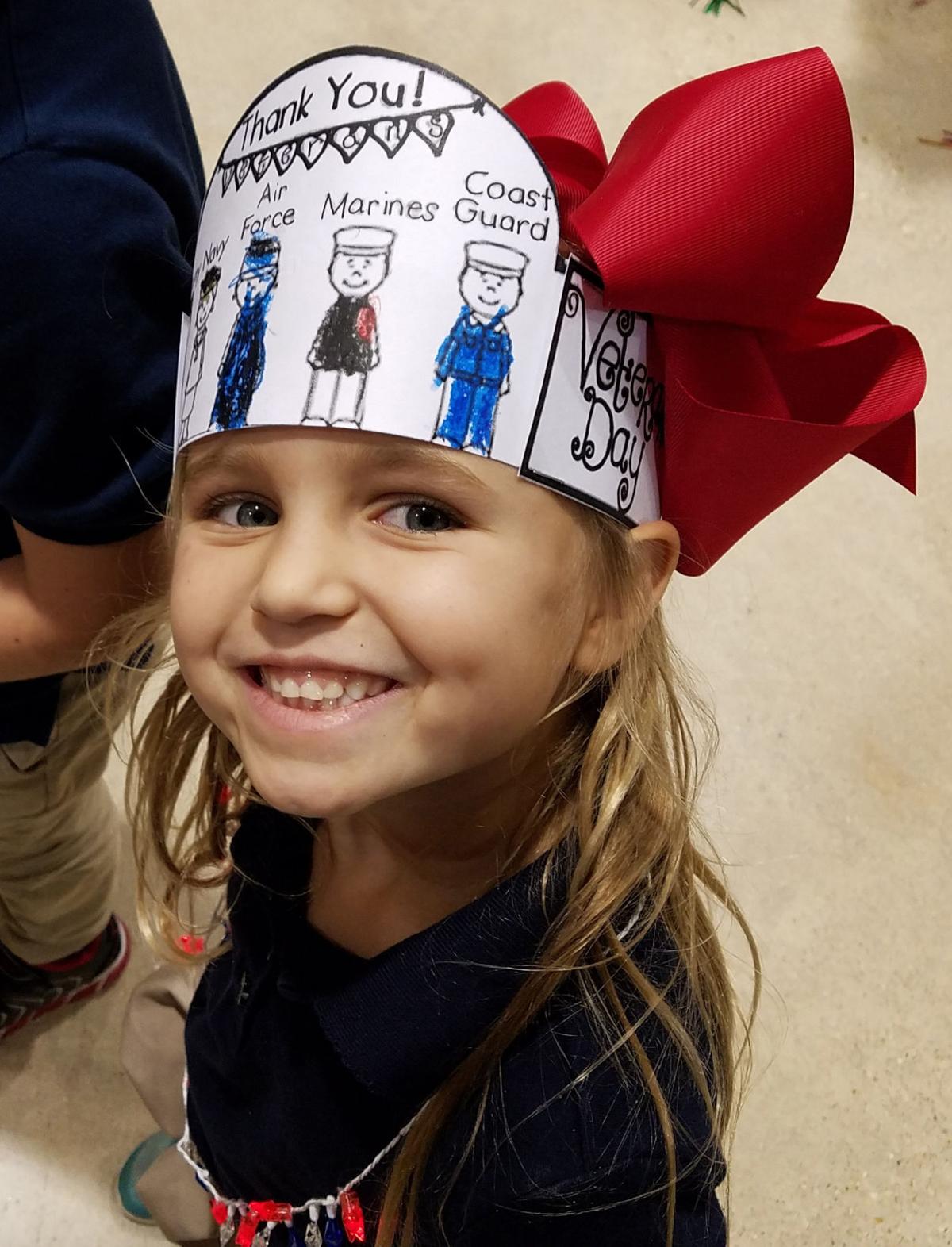 Mary Katherine Harrell introduces the pre-kindergartners and kindergartners before they sang 'America to Me' at a Veterans Day program at Seventh Ward Elementary School.

With their Uncle Sam patriotic hats in place, all that was missing from the second graders’ outfits were cotton swab beards during a Veterans Day program at Seventh Ward Elementary School.

Mary Katherine Harrell introduces the pre-kindergartners and kindergartners before they sang 'America to Me' at a Veterans Day program at Seventh Ward Elementary School.

The bright red cup of punch and red-icing cupcake were becoming perilously closer and closer to the clean, white shirt first grader Jaxson Aguirre, 6, was wearing at Seventh Ward Elementary School. Most moms would be nervous, but not Jaxson’s dad, Willie Aguirre Jr. He laughed it off as just more red for the red, white and blue being celebrated that day in Denham Springs.

Both were enjoying refreshments during the school’s Nov. 11 Veterans Day Program at the school. Every grade was dressed in red-white-and-blue attire and performed songs for the event, which honored the students’ parents, grandparents, great-grandparents, friends and others who have served in the military.

Parents, staff and volunteers made sure the gymnasium sparkled in patriotic colors, symbols and balloons.

A veteran serving as an Army specialist in 2006-2010 during Operation Iraqi Freedom, Aguirre appreciates the lessons learned about fighting for America being shared with schoolchildren and that younger veterans are now taking on this mantle for the more senior veterans.

“I love it,” Aguirre said of the ceremony. “It’s nice, and you get to meet other veterans from around here. Plus, it’s good to see the younger veterans start taking on these good traditions.”

After a presentation of colors by the Knights of Columbus 4th Degree, the Pledge of Allegiance and the singing of the national anthem, students performed patriotic tunes for the veterans.

Mary Katherine Harrell, 5, introduced the pre-K and kindergartners in singing "America to Me."

In a half-singing, half-yelling way, the students told the audience: “It’s my country, the United States, and it means so much to me.”

First graders sang "Three Cheers for the Red, White and Blue" and "Oh, When the Flag" (sung to the tune of "When the Saints Go Marching In") — complete with handbells, goose-squawking kazoos and flag kerchiefs. They were followed by a group of second graders in Uncle Sam hats, belting out "God Bless the USA." Festivities continued with renditions of "I Still Believe" by third graders and "Thank you Military" by fourth graders The fifth graders were part of the all-grades Military Medley of many songs and held up signs spelling out “You’re a Hero.”

The highlight of the event was keynote speaker Sgt. Benton Thames, a former Army sentinel for the Tomb of the Unknown Soldier. Thames shared a story about his service there. He said he was returning to his station one day in uniform and noticed a small group of older veterans — many sitting in wheelchairs. As he passed them, one after another of the seniors struggled to stand on their own — refusing any help. “All the veterans were in a row, and they saluted me,” Thames said.

At the end of the school event, veteran Seaman First Class George Tircuit, who served on deck and for a small boat target on the Navy’s USS Hillsborough County, was there to share the event with great-granddaughter Ava Patterson. 8. “I love to sing and to honor my great-grandfather,” Ava said.

Tircuit, who spent most of his service in the Arctic Ocean, said the program made him proud of his service, his country and his family. He admitted reluctantly that the performance might have “brought a tear to my eye.”

Jaxson agreed as he took another lick of his red cupcake. There weren’t too many red stains on his white shirt.