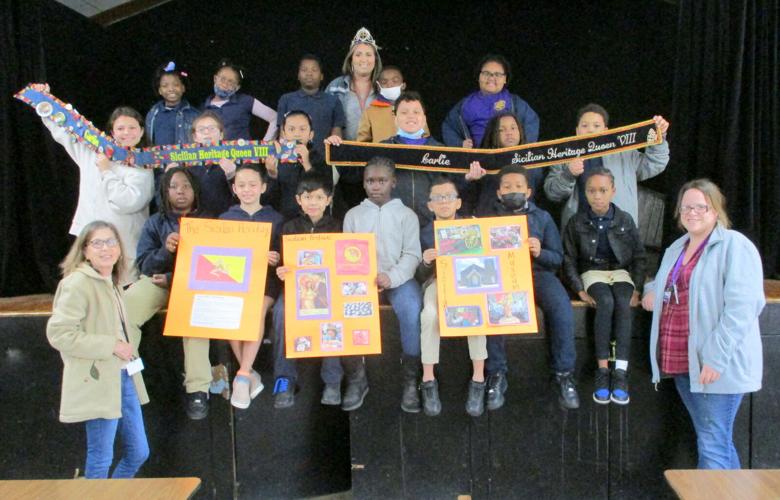 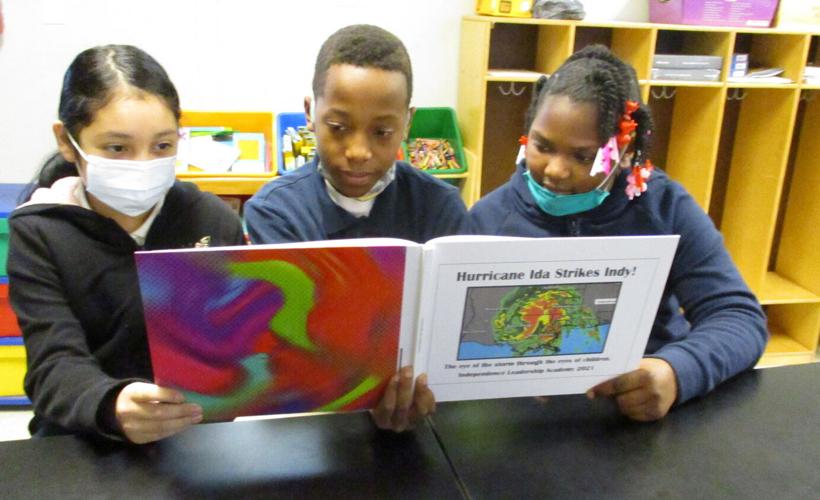 Fourth grade students at the Independence Leadership Academy, from left, Nicole Valdez, Jaden Walker and Elajah Davis look over the book they helped write about how Hurricane Ida affected their lives, their families and their school. The book contains accounts of the storm written by the students and pictures of how they viewed the storm that damaged part of their school.

Fourth grade students at the Independence Leadership Academy, from left, Nicole Valdez, Jaden Walker and Elajah Davis look over the book they helped write about how Hurricane Ida affected their lives, their families and their school. The book contains accounts of the storm written by the students and pictures of how they viewed the storm that damaged part of their school.

As part of a study on how different cultures impact their daily lives, students in the fourth grade at Independence Leadership academy have been exploring the Sicilian roots that still run deeply in a number of communities in Central Tangipahoa Parish and especially Independence, which at one time had earned the unofficial title of “Little Italy.”

The focus was placed on a study of the history of the Sicilian culture because Independence will celebrate its annual Independence Sicilian Heritage Festival March 11-13. That festival has a history that stretches back for about four decades when it was originally known as the Independence Italian Festival.

Sharon Philitson, who teaches the fourth grade at the leadership academy, said that presenting the rich heritage that pioneering Sicilian families brought to the Independence area starting in the late 1800s especially resonates with her because her own ancestors were among the first to settle in the area.

Reminiscing, Philitson said she descended from the Baglio family, a large family that traces its roots back to Sicily. "My great grandparents left Sicily in the 1880s and after a very long sea voyage, made difficult because of being stranded in what was known as the doldrums, finally arrived in New Orleans. They went to work in the sugar cane fields along the Mississippi River and my grandmother told me stories that this was exceedingly hard work."

The Sicilians, she said, got work in the cane fields because they would do the work cheaper than other labor forces that were available at the time.

She said the Sicilians were very thrifty, saving money from their meager wages to eventually buy 10 acres of land in the Independence area. “The land was cheap and easy to get but the Sicilians had to promise to develop the land. In those days, strawberries were the main crop and that is how my ancestors became firmly established here, growing strawberries,” she said.

As an aside, Philitson said that she is going to treat her students to fresh strawberries and adds, “those berries will come from the same land where I grew up and where I picked strawberries. It’s very good land and it grows some delicious strawberries,” she said.

It is that culture that Philitson is so eager to share with her young charges. “When the Sicilians first arrived in this area, they were not always welcome. But by working very hard and by taking care of the land and their families they showed that they could become very good citizens and they could contribute in ways that made this area a better place for everyone,” she said.

“Preserving the language was very important to early settlers and I remember that my grandparents still spoke Sicilian when I was young. The early families remained steadfast to their religion and many of the customs their brought from their native land. Part of that heritage was also the food and the way they cooked that is still special today. Our ancestors left us with a rich heritage and it is important that today’s youngsters learn about where their ancestors came from and what they did to create the place where we live today,” she said.

She has tied in a study of the Sicilian heritage with the coming festival and as part of the story she had Carlie Vaccaro, queen of the Sicilian Heritage Festival five years ago and now a teacher at the school, tell the children all about her experience as the queen and what the festival has to offer.

Philitson’s personal background helps her relate to how different cultures can bring about different legacies. After leaving the Independence area of her youth, she eventually married an Australian and lived in Australia for many years. About 10 years ago she decided that she wanted to be a teacher so she returned to the United States, earned a degree and certification, and is now teaching in her original hometown. During the past school year whe has led session on other cultures. For example, her students learned all about Jewish customs when they studied the Festival of the Lights and other special days observed by Jewish families.

Philitson said she is constantly challenging her students and looking for ways to have them express their feelings over events that have impacted their young lives. Following Hurricane Ida, she encouraged her students to write short stories of what they personally remembered from the storm. She also had the students draw pictures of how their viewed the story. She then turned the stories and pictures into a hardback book that has drawn considerable attention. Donna Edwards, wife of Louisiana Gov. John Bel Edwards, came to the school and read the book to the students.

The book is appropriately title, “The Eye of Storm Through the Eyes of Children.” She said of the storm experience, “our campus was hard hit by the storm and our young students were upset to see their school damaged. I thought that working on the book would help them come to understand that storms happen and that once it has passed, it’s time to make repairs and move on.”

As the festival draws near, third and fourth graders will be taken on a tour of the Italian Heritage Museum that has been a part of the local culture for decades. The museum is housed in the old Mater Dolorosa Catholic Church building in the heart of the city. The museum includes many items related to Sicily that were donated over the years. At one time, a St. Joseph’s Altar, a Sicilian tradition that is till carried on in many communities, was created on the altar of the church so that visitors could see what these very special altars look like.

“When the children go the festival this year, and hopefully for many years to come, it is my hope that they will have a greater appreciation of what their ancestors brought here. After our studies of the Sicilian origins of our community, I just think that our students will enjoy their hometown even more than they would have had we not made this study together,” she said.