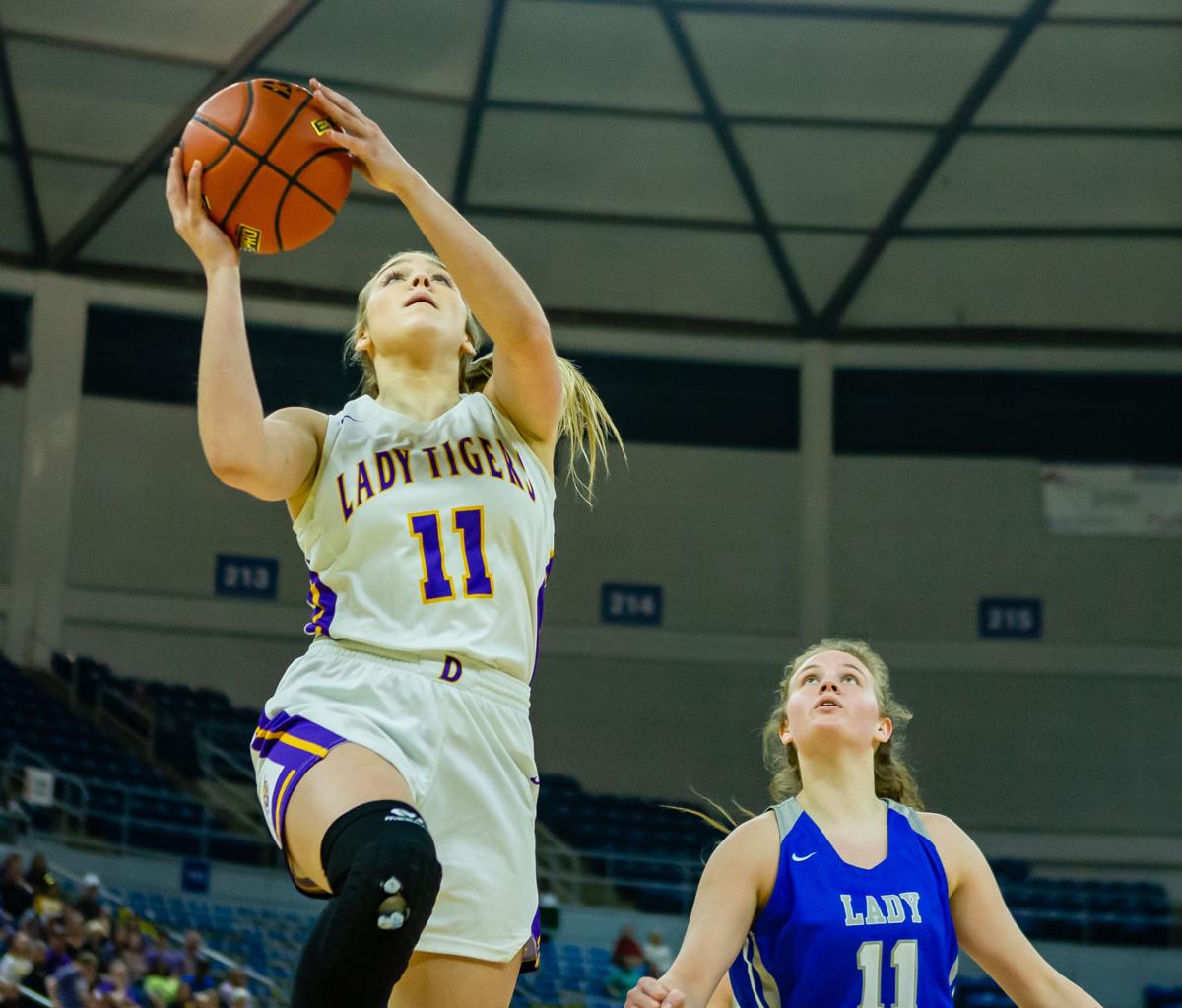 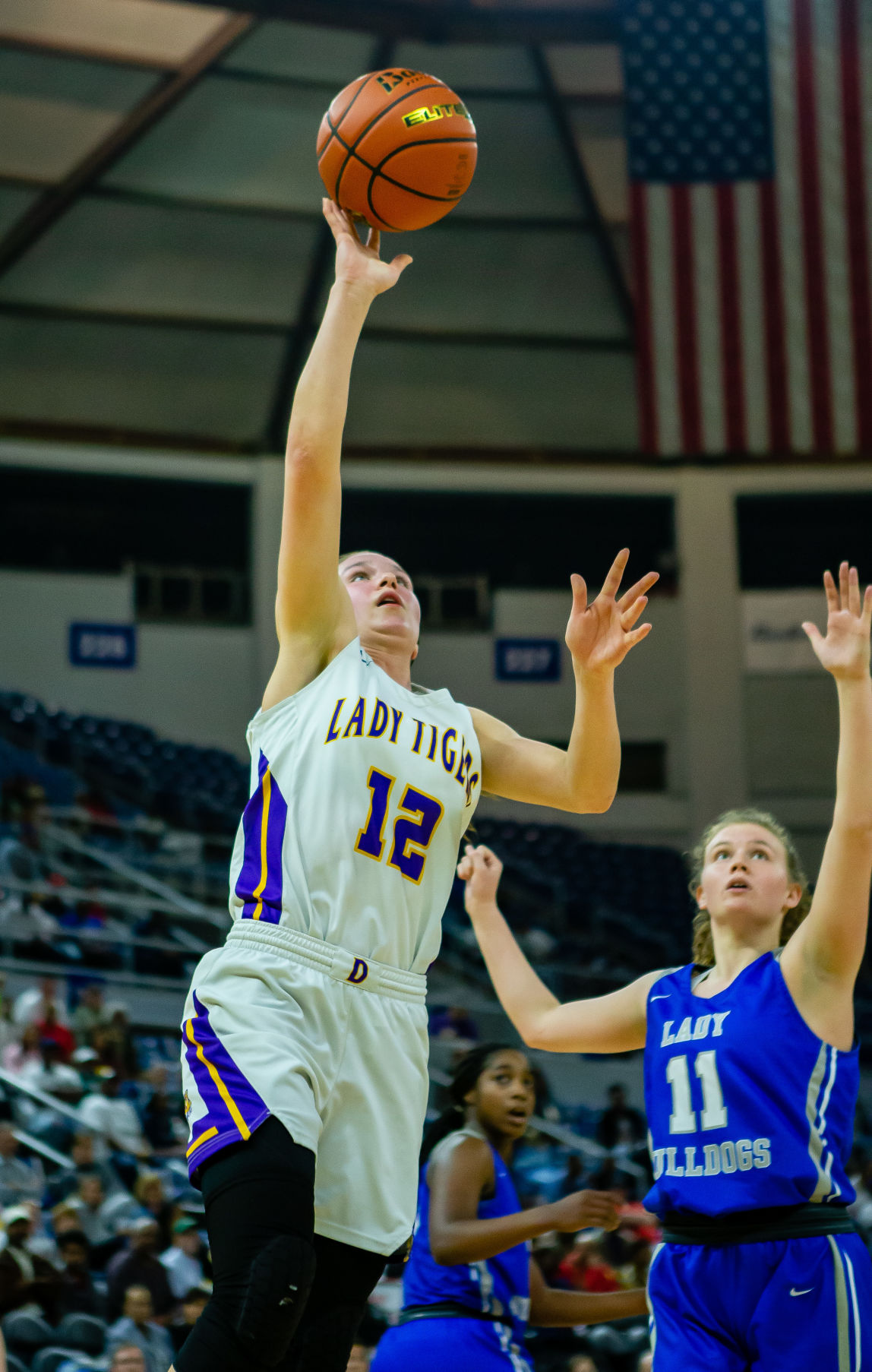 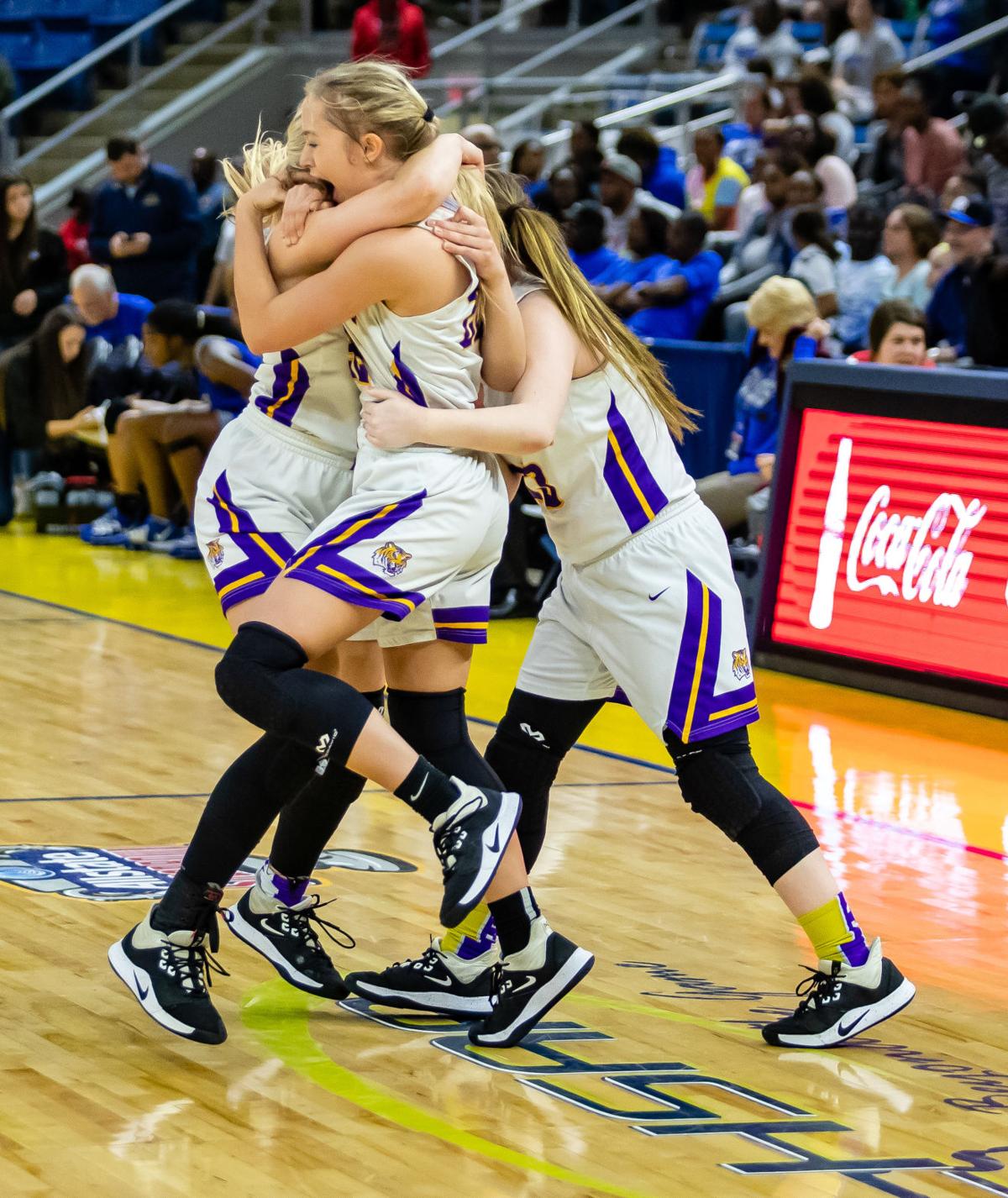 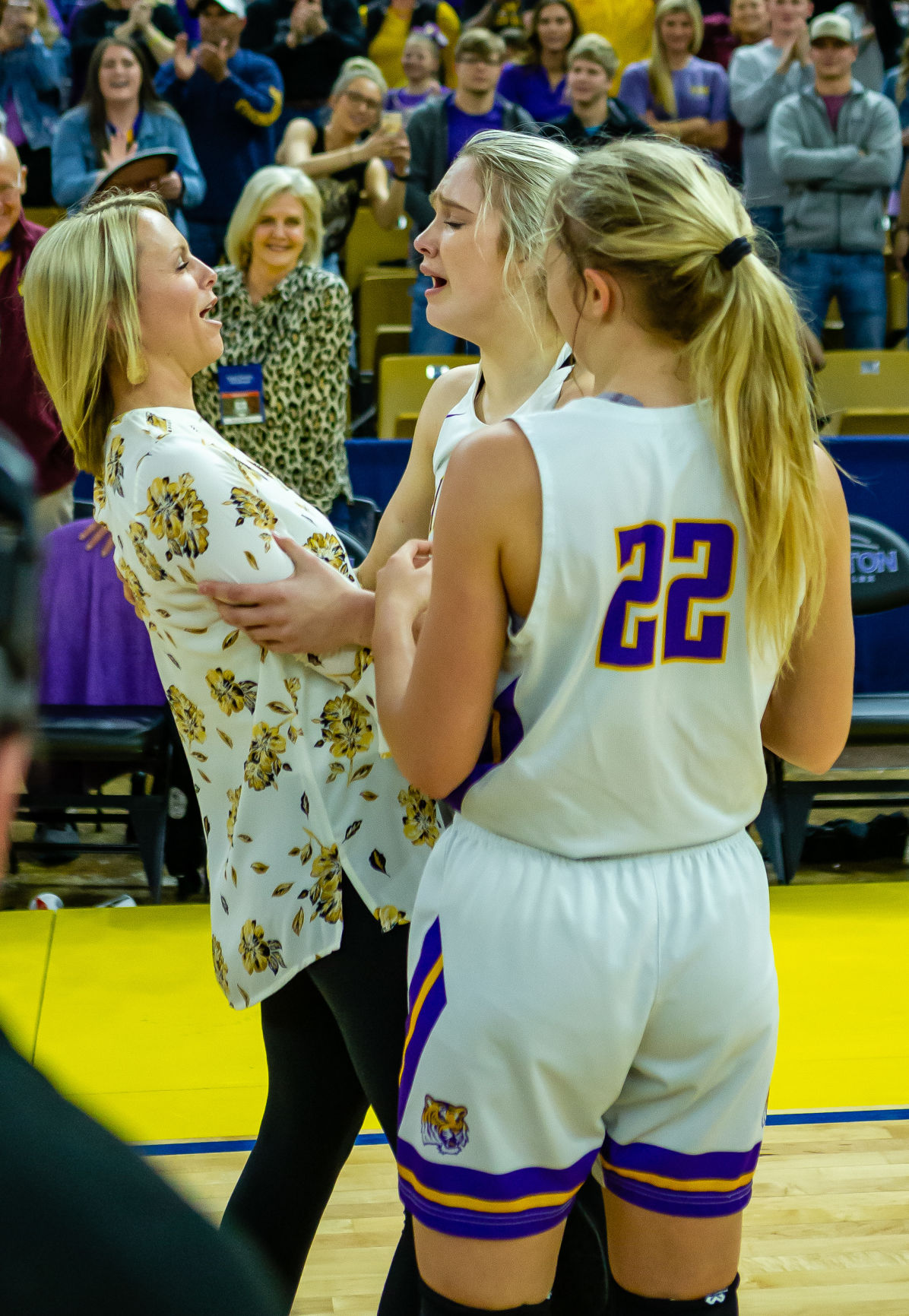 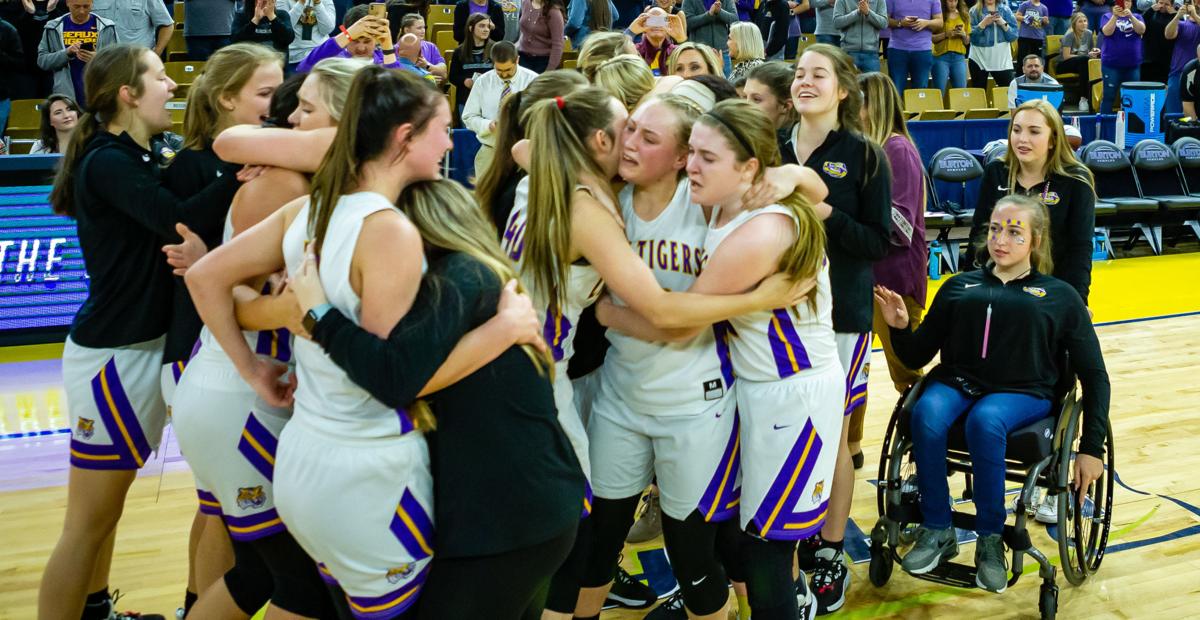 The celebration was on for the Doyle girls basketball team after another big win.

Bright confetti flew through the air like a rainbow blizzard. Screaming fans stormed the floor. Players climbed a ladder and took turns clipping off pieces of the net. An exuberant mom passed out pastries. Bruno Mars belted out "Uptown Funk" over the PA system.

The place was lit.

Doyle’s postgame party after claiming the Class 2A state title?

This was the scene on Feb. 27 after Doyle demolished Franklin 88-49 in a third-round contest at the Tiger Cage. It was an emotionally cathartic experience because it meant the team had advanced past the third round, which is the point where the top-seeded Tigers were turned back a year ago.

It also meant Doyle was one more step toward taking care of some unfinished business. That mission was finally accomplished Saturday when the Tigers trounced Red River 73-66 for their first title since 1979.

Watching Doyle dismantle opponent after opponent this season was a great thrill, but one moment stood out for me.

It was the regional round against St. Helena. The Tiger Cage was rocking and juniors Presleigh Scott and Kourtlyn Lacey were unleashing a fierce fast break attack. Scott took Kacey’s perfectly placed bounce pass and kissed it against the glass for two.

But Scott wasn’t through. As she did after every Doyle score, Scott brazenly dared the other team to put the ball back in play. She jumped up and down along the baseline, waved her arms wildly and shouted, “Ball, ball, ball!”

With lightning reflexes, she intercepted the inbounds pass and in a flash laid it up for another bucket. And then, as if someone had smashed the rewind button, she did the same thing again.

Every starter on this championship team played a different role.

Senior Meghan Watson was as tough as nails inside the paint and delighted Tiger fans with her unstoppable turnaround, fallaway jumper that she rolled off her left fingertips and into the hoop. She was the team’s second-leading point producer behind Scott.

Lacey applied relentless defensive pressure baseline-to-baseline from her point guard position and could be counted on for several assists per game.

Fellow junior Elise Jones followed Watson in offensive productivity and led the team in assists. Jones displayed remarkable instincts in the full-court game both moving the ball on offense and anticipating the action on defense.

In fact, it was Jones who was named MVP of the title game. After Scott was beset by foul trouble, Jones took control and scored a stunning 26 points and pulled down 11 rebounds. She also credited senior Madison Duhon for her contribution to the winning season.

Leading the charge was coach Samantha White, who molded this team in her own image as a gritty competitor from her days as a player.

Other team results: French Settlement fought all the way to the semifinals before falling to Red River. Holden and Albany advanced to the quarterfinals while Denham Springs and Springfield both made it past the first round.

On the boys side, No. 7 Doyle was stopped in the regional round, while at press time Walker was in contention as a semifinalist in Class 5A. The Wildcats whipped H.L. Bourgeois 82-59 in the quarterfinals and face Bonnabel on Wednesday, March 11, in Lake Charles.

Billy Gibson covers sports for The Livingston-Tangipahoa Advocate. He can be contacted at gforceskyshots@gmail.com or livingston@theadvocate.com.