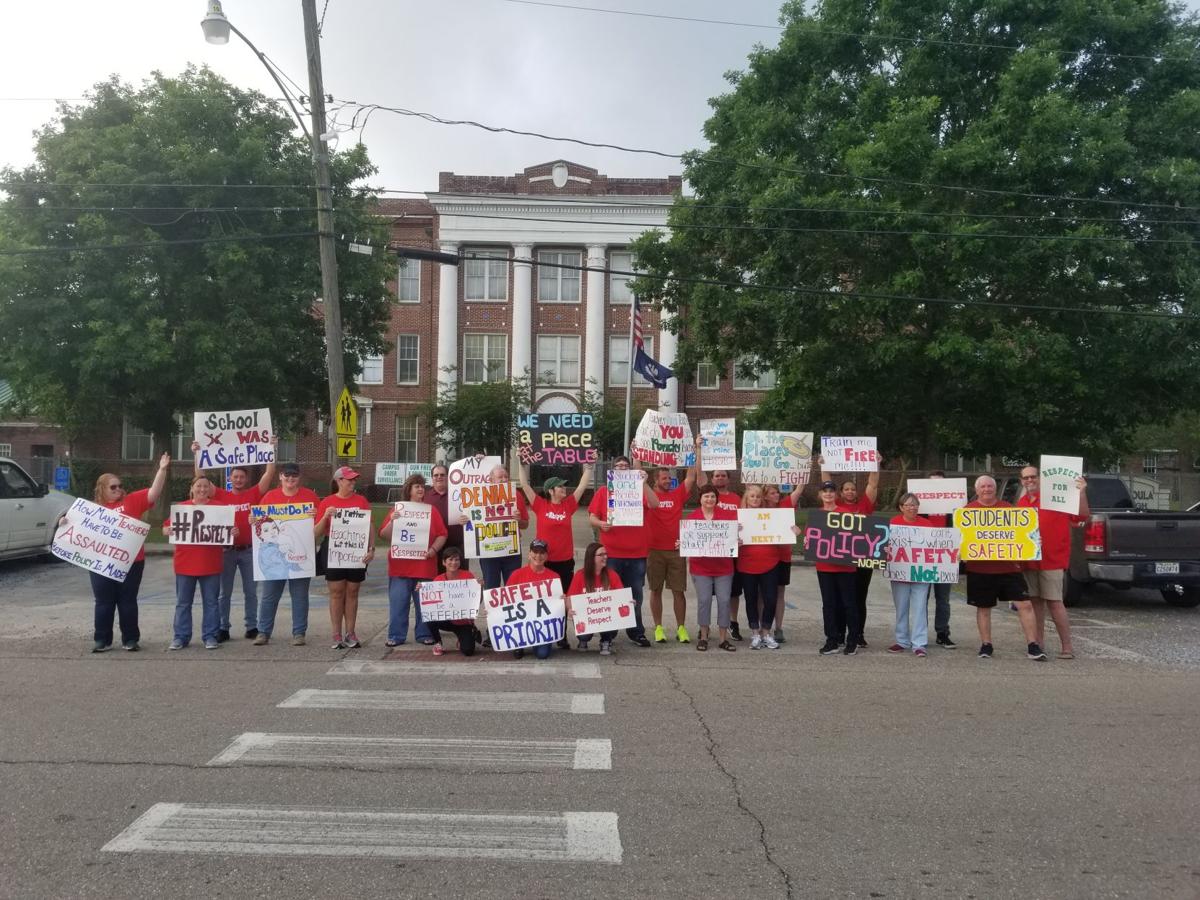 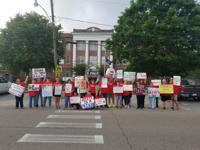 Ponchatoula Junior High School employees protested Thursday May 9, 2019 to demand clearer policy on how they should intervene if a fight breaks out on campus, according to a teacher's union. 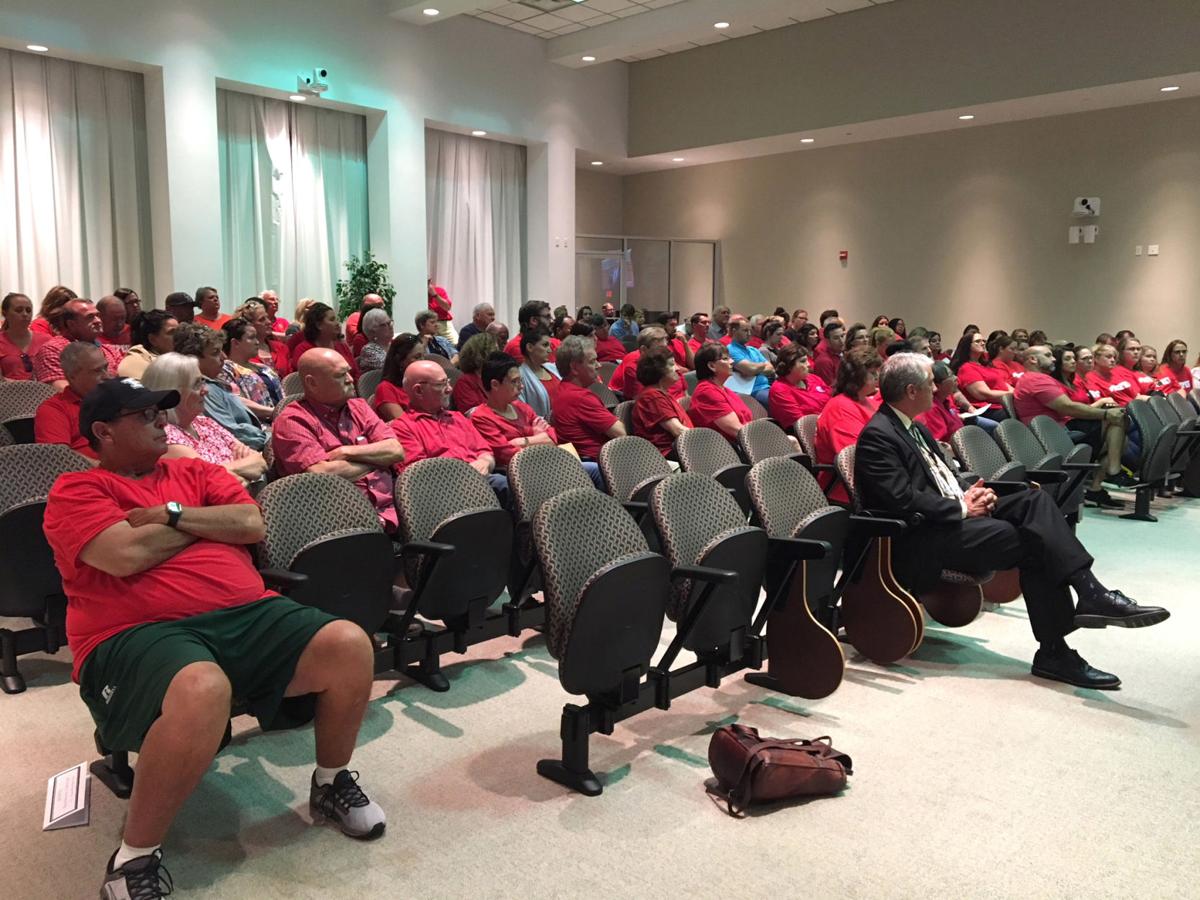 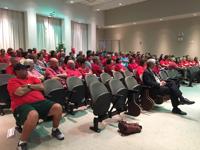 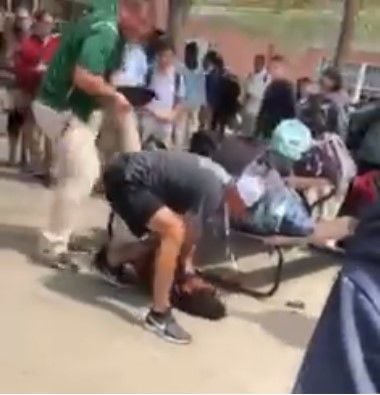 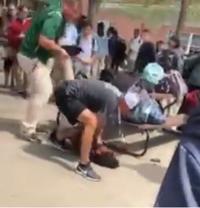 Ponchatoula Junior High School employees protested Thursday May 9, 2019 to demand clearer policy on how they should intervene if a fight breaks out on campus, according to a teacher's union.

When two Ponchatoula Junior High teachers were fired over the way they handled a recent fight between two students, it prompted a teacher walkout at the school and a demand for clearer policies on violent outbreaks that some educators say are needed for schools throughout Louisiana.

Statewide there is no consistent policy on how teachers are supposed to respond when kids get into fights with each other or attack teachers. State law articulates some principles regarding restraint for students with special needs but otherwise leaves the matter up to the school districts.

"This has sent a little ripple effect across some of the other parishes," said Larry Carter, president of the Louisiana Federation of Teachers.

Policies differ among school districts and "can be all over the map," Carter said, while some have no policy at all. He said he's looking at raising the issue during the next regular legislative session

Just in the immediate area of Ascension, East Baton Rouge, Livingston and Tangipahoa parishes, there is considerable variation among school districts with respect to training and policy.

None has a step-by-step policy for teachers on what's expected of them in intervening in fights, and they vary as to the role of law enforcement and the selection of people who are trained in dealing with violent outbursts.

Nonetheless, some experts and educators say, the most critical issue is not how to appropriately restrain students, but rather how teachers and students address issues before violence breaks out.

What led to the fight at Ponchatoula Junior High School remains unclear. But the situation escalated into two students punching each other in the head and grabbing at each other's shirts while students stood around the outdoor courtyard, according to a video of the incident.

Educators say these kinds of fights are often the result of conflicts and adversity that begin off school grounds.

"It starts maybe at home or on the streets, and the kids bring it into the schools," said Debbie Meaux, president of the Louisiana Association of Educators.

Suzanne Harris, coordinator of the LAE's teaching and learning center, noted that some kids are facing adverse conditions at home, such as poverty or drug use, which can lead to trauma.

"When they come into the classroom, many of them are responding to things that are outside of the classroom and become part of their behavior," Harris said.

In the Ponchatoula incident, a teacher ended the fight by pulling one of the students away, video shows. Then two teachers held the girl to the ground, one with a knee in the 14-year-old student's chest, the other pulling the student by the leg and cursing at her, video of the incident shows.

A 22-year-old man was arrested after police say he called in a bomb threat to a Ponchatoula school Friday, apparently in response to a video c…

Tangipahoa Parish Superintendent Melissa Stilley has not explained fully her reasoning for firing the two teachers. But in public comments Tuesday, she said the teachers' behavior did not meet her expectations.

"The decision was based on our expectations both for employees and students in our parish and how they should conduct themselves even in tough situations," Stilley said at the School Board meeting.

But teachers said, in essence, that the expectations were not laid out for them clearly. About 50 came to the School Board meeting Tuesday to voice their concerns, while 17 walked out of Ponchatoula Junior High School in protest Thursday.

She added, "We now see that if we physically intervene then we may lose our careers if a student complains or if a snippet of a video taken at particular angle may appear that we did something wrong or something we shouldn't have."

In Tangipahoa Parish, the school system uses as the general policy for restraint the guidelines encoded in state law for special needs students, according to Stilley.

It should be used only "as a last resort to protect the safety of self and others" and only "to the degree necessary to stop dangerous behavior." The policy also says it should be done in a way that causes no physical injury to the student and results in the least possible discomfort to the student.

Stilley said the school district also provides training to three to five staff members at each Tangipahoa Parish school campus on proper restraint techniques. Those staff members learn a program called "Handle With Care" under a two-day training and are supposed to function as a response team in case of fights.

AMITE — About 50 teachers, support staff and their backers filled the Tangipahoa Parish School Board chambers Tuesday to protest the terminati…

Policies differ in nearby parishes. In response to requests for information, representatives from Ascension, East Baton Rouge and Livingston parishes did not provide any policies that specifically addressed a teacher's role in stepping into a campus fight.

In Ascension Parish, schools spokeswoman Jackie Tisdell said the school system has no board policy on this issue, nor is there a standard training. Training in intervention and deescalation are given to special education staff, she said.

East Baton Rouge Parish has a policy of calling law enforcement in the case of fights among kids over the age of 14, according to schools spokeswoman Taylor Gast.

She said principals and special needs teachers are provided nonviolent crisis intervention training, which is optional for teachers.

The Livingston Parish School Board, meanwhile, requires school leaders, as well as people they deem "essential personnel" to be trained in the same "Handle With Care" program offered in Tangipahoa Parish, according to Delia Taylor, a spokeswoman for the school system.

A policy on restraint is not the the full answer to handling school behavior problems, said Chris Pisciotta, a former Tangipahoa Parish teacher.

Pisciotta said he was assaulted twice while teaching in the Tangipahoa Parish school system.

On one occasion, he said, a student bit him when he was intervening in a fight at Hammond High School. On another, Pisciotta said, he was attacked and injured at Independence High School after confiscating a student's phone during class.

Pisciotta, who is white, said he put his hands in the air during the incident, fearing that trying to restrain the student, who was black, would result in backlash for him.

"Race was the first thing that entered my mind, and how this would be perceived in the school system and media at large," Pisciotta said.

Pisciotta left after the incident and took a job teaching high school math at a rural school in southern Livingston Parish.

Stilley said the school system will move towards a zero-tolerance policy for students who instigate fights. Those kids will be sent to an alternative school, which is being redesigned to better address behavior modification.

She is also convening a meeting with teachers from each school in the coming weeks to discuss policy changes. She said one thing coming next year will be lessons for all staff on how to deal with fights, taught by trainers on each faculty. The idea is to give teachers a "1-2-3" process to respond.

The more important changes, however, may have to come deeper. While teachers may be clamoring for a definite policy on dealing with student fights, the answer to the problem at hand may be rooted deeper and require more complex solutions, experts say.

David Osher, an expert on school discipline from the American Institute of Research, noted that students have, historically, fought at school, but the response was not always to remove them.

Ideally, he said, schools are equipping students with the social and emotional tools that make them less likely to fight. At the same time, they're training teachers on how to prevent fights from happening. Teachers need the skill set to recognize developing conflicts and deescalate them, as well as to build relationships with students, such that the student would respect the teacher in case of a problem.

Training along those lines is what Harris, of LAE, says her organization has been offering in recent years to teachers statewide.

LAE offers classes in deescalation that is intended to help stop fights before they begin. LAE also offers cultural competency training that is supposed to help teachers develop relationships with students of different backgrounds.

"Mainly, we're trying to help them learn what motivates behavior with students and how to find out what the triggers kids, so you can perhaps alleviate those triggers prior to them happening," Harris said.

Girl in Ponchatoula school video is released after 6 days in detention in unrelated incident, attorney says