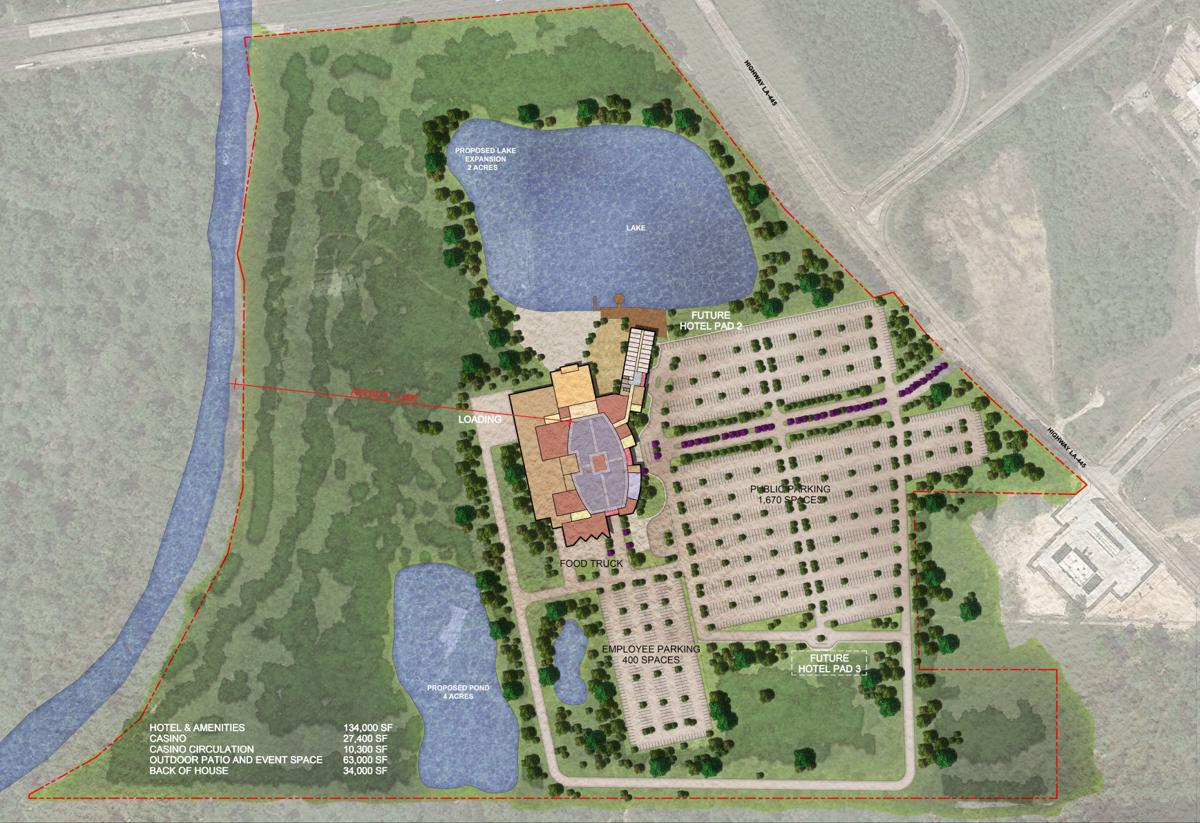 A site plan for the casino that is proposed to be built in Tangipahoa Parish by Los Angeles-based Peninsula Pacific. While billed as a riverboat casino, the gambling floor would sit on land 1,000 feet from the river or on a barge over a small moat filled with water from the nearby Tangipahoa River.

A site plan for the casino that is proposed to be built in Tangipahoa Parish by Los Angeles-based Peninsula Pacific. While billed as a riverboat casino, the gambling floor would sit on land 1,000 feet from the river or on a barge over a small moat filled with water from the nearby Tangipahoa River.

A proposal to build a riverboat casino a few miles east of Hammond is a step closer to reality.

Over the objections of several residents and religious leaders, the Tangipahoa Parish Council voted 6-3 Monday night to call a special election in November to let voters decide whether to allow Los Angeles-based Peninsula Pacific to build a casino, just south of Interstate 12 by La. Highway 445.

The casino company still has another important hurdle to clear in the state Legislature, where the company is seeking approval to move its casino operations from Bossier City to Tangipahoa Parish.

Peninsula Pacific has proposed to build a $100 million casino, hotel and event center along the Tangipahoa River. Company representatives have promised the business would bring 500 permanent jobs to the parish with an average salary and benefits of $35,000 each. They have pitched the casino as an opportunity for Tangipahoa Parish to recapture gamblers — and the tax revenue from the industry — that is otherwise headed to Mississippi.

A company representative said last week that that the development could open by Spring 2020.

But residents who wore blue and packed the council chambers on Monday night were not sold on the company’s promises, citing moral objections to gambling and concerns about drainage, the effects on local businesses and the crime and addiction problems that gambling is often thought to bring, according to video of the meeting posted online.

“Gambling is a menace to society, deadly to the best interests of moral, social, economic and spiritual life, destructive to good government and good stewardship,” said Warren Clifton, pastor at the United Methodist Church of Ponchatoula.

Elected officials, including Parish President Robby Miller, have said publicly they want to give people the chance to vote. But Clifton said that voting for resolution was equal to a vote for gambling in the parish.

“We expect you, our elected representatives, to own your decision, rather than washing your hands of this issue under the guise of democracy,” Clifton said.

Josh Dickson, minister of discipleship for the First Baptist Church of Ponchatoula, warned that regional casinos attract “the great majority of their customers from nearby communities.”

“In reality, an entertainment and gaming resort merely translates to a casino that will bring in a regressive source of revenue,” Dickson said.

Sandra Scully, a resident of Ponchatoula, who said she flooded twice in 2016, also questioned the prudence of building right next to the Tangipahoa River.

“We are trying to tell you, this river cannot handle this volume of water, it is not the drainage ditch for Tangipahoa Parish,” Scully said. Casino representatives have said they will build retention ponds to handle a 200-year flood.

Brent Stevens, CEO of Peninsula Pacific, also attended the meeting. He said he was glad to listen to the community’s input.

Sponsors of two bills sought by owners of floating casinos continue to lack the votes they need to pass the measures in the state Senate.