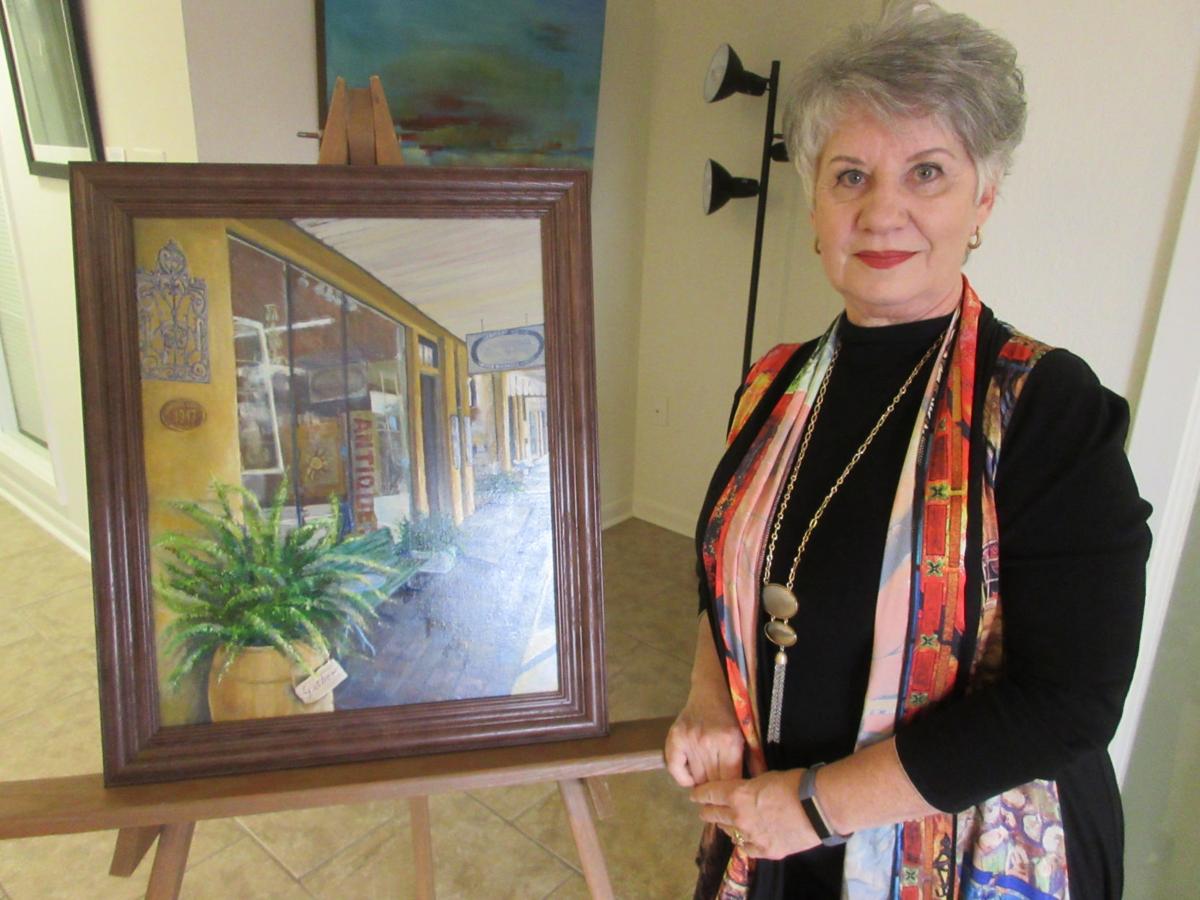 Artists Diane Scimeca stands by her painting of buildings in Denham Springs’s Antique Village that graces the cover of a newly published book, 'Preserving the Culture of Livingston Parish.' The 136-page coffee table book is filled with full-color reproductions of paintings, photos, fabric art and sculpture. The book will be formally introduce at a reception at the Arts Council of Livingston Parish’s Gallery on Saturday. 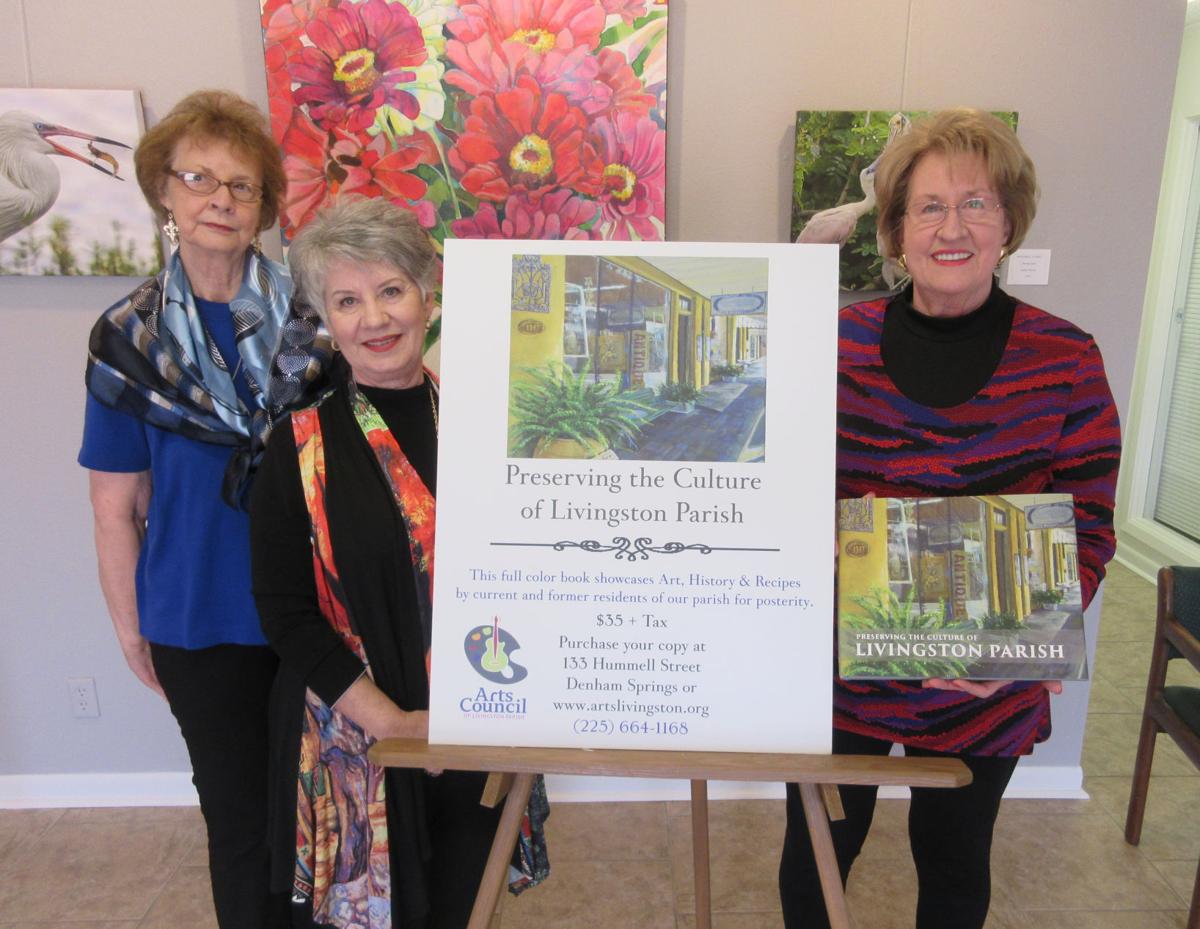 Judye Averette, right, holds a copy of the book she edited, 'Preserving the Culture of Livingston Parish,' next to a poster advertising the publication. With her are Mary Felder, left, who served as co-editor of the book and Diane Scimeca whose picture of Denham Spring’s Antique District graces the cover of the book.

Artists Diane Scimeca stands by her painting of buildings in Denham Springs’s Antique Village that graces the cover of a newly published book, 'Preserving the Culture of Livingston Parish.' The 136-page coffee table book is filled with full-color reproductions of paintings, photos, fabric art and sculpture. The book will be formally introduce at a reception at the Arts Council of Livingston Parish’s Gallery on Saturday.

Judye Averette, right, holds a copy of the book she edited, 'Preserving the Culture of Livingston Parish,' next to a poster advertising the publication. With her are Mary Felder, left, who served as co-editor of the book and Diane Scimeca whose picture of Denham Spring’s Antique District graces the cover of the book.

The large, full-color book is a celebration of the creativity of past and present artists who have made contributions to the arts culture in Livingston Parish. The 136-page volume also contains brief historical accounts related to Livingston Parish and to the nine towns and municipalities that are enclosed within the parish’s boundaries. Also included are numerous recipes that reflect the ethnic backgrounds of the parish’s diverse population.

The creations of 35 artists are included in the book and a brief sketch of each artist and their reflections on what art means to them is included in the volume’s closing section. Spread out across the book’s pages are reproductions of paintings in oil, acrylic and watercolors; photographs; fiber art; and sculpture. The scope of the artistic offerings reflect the wide variety of interests expressed by artists who have practiced their craft in Livingston Parish over the years.

The book was the inspiration of Judye Averette, the council’s treasurer, who served as its editor. She was assisted by Mary Carpenter Felder, who served as co-editor. Averette said the idea of producing such a book came to her when she saw a similar book that was published elsewhere.

“This gave me the inspiration that such a book would be a very special contribution to the arts scene in our parish. We have some really great artists who have made significant contributions to the arts community and I, and later members of a committee we established, saw this as a way to pay tribute to those artists and to the work of the Arts Council. It was not just about the book. … It was about the artists themselves who deserved the recognition for their work in promoting the arts in our community,” she said.

Averette called the book "something of a legacy for the artists and for the people of the parish. "We sought to combine art with the history of the parish to show how art reflects who we are as a people. The art depicted in the book reflects many of the aspects of our culture in Livingston Parish and ties in to our history in various ways.”

Joining Averette and Felder on the committee were photographers Jenny Bauer, Judy Momenzadeh, Kristine Stone and Terri Sullivan and Charlotte Reynolds, administrative assistant to the board.

Averette and Felder said they quickly learned while discussing how to go about putting such a book together that they had “zero experience in being book publishers.” The book’s final completion is the result of more than two years of planning, choosing the art that was included, preparing accompanying copy, and finally sending the material off to the publisher. The final design and printing was accomplished by Artbookprinting.com.

The book is dedicated to the late Kathy Hoskins Reeves, who was a nature photographer. Reeves, whose favorite subjects were egrets, herons, hawks, seagulls and other animals, traveled the world. Her photographs were widely acclaimed and she had some pictures published in National Geographic. Reeves was active in the Arts Council of Livingston Parish and was named the group’s Artist of the Year in 2012. Many of her photographs are included in the book.

Averette and Felder said that in selecting artists to depict in the book they made an effort to include artists who have made contributions over many years. They cited Bill Rice, who was a recognized artist for his creations over many years. Paintings by Lionel Kable Sr. that depict scenes of historic significance in Denham Springs are also included in the book.

A painting by Diane Scimeca depicting the Downtown Denham Springs Antique District graces the slip-on cover of the book. Scimeca said the inspiration for her painting came from her experiences on the day of the flood in August 2016. Scimeca said she had been taken from her flooded home to an area in the Antique District that had not flooded to await transportation from that spot to another safe area. She said she arrived in the area about 10:30 a.m. and that throughout the day she awaited her turn to be rescued, giving up her places to others she felt needed the help sooner than she did. She said she was finally evacuated after dark.

“After spending the day looking at the buildings that were just above the flood line, I decided to paint the scene that was so graphically sealed in my mind. I guess it is fitting that they chose my painting to grace the front cover since the flood has become such a large part of our history and the shared experiences of so many,” she said.

The back cover is a painting of cattle, “Longhorns,” by prolific painter Michelle Conques, whose paintings are seen at frequent gallery shows. Those perusing the book will notice the name of several artists who have become familiar to those who visit the gallery. Several of Marita Gentry’s vividly colored paintings are in the book. Gentry was the artist who painted the murals that now grace the back of the Arts Council Gallery. Photographer Bauer made pictures of practically every Louisiana historical marker in the parish for the book. Food photographer Stone, who was last year’s Artist of the Year, took the pictures that accompany the recipes. Momenzadeh, also a regular at gallery shows, make numerous photographs of paintings for the volume.

Those who choose to read the book will be greeted by a wide variety of artistic creations. Felder’s three-dimensional fabric art vase, a rarely seen piece, is shown in the book. Her husband Keith Felder’s carved dugout pirogues are pictured. Metal sculptures by Ed Millet Jr. are depicted. Averette said the works shown represent creations from artists of all ages. A drawing of a dog’s face was done by teenager Baylee Robinson.

Averette said the book is not a fundraiser. She said any profits that might accrue from the sale of the book will be dedicated to promoting the arts, and the artists, through the Arts Council of Livingston Parish.

“This book was conceived as a tribute to what the arts mean to our parish. It was a way of saying that our artists have tremendous talent and that their talent should be preserved and shared. We want it to be something special for those who dedicated their time and talent to creating beauty that our community can enjoy. This is just one more way we can support the arts in Livingston Parish,” Averette said.

The book was supported, in part, by the New Orleans Jazz & Heritage Foundation, Inc., the Arts Council of Greater Baton Rouge, Entergy and Visit Livingston Parish.