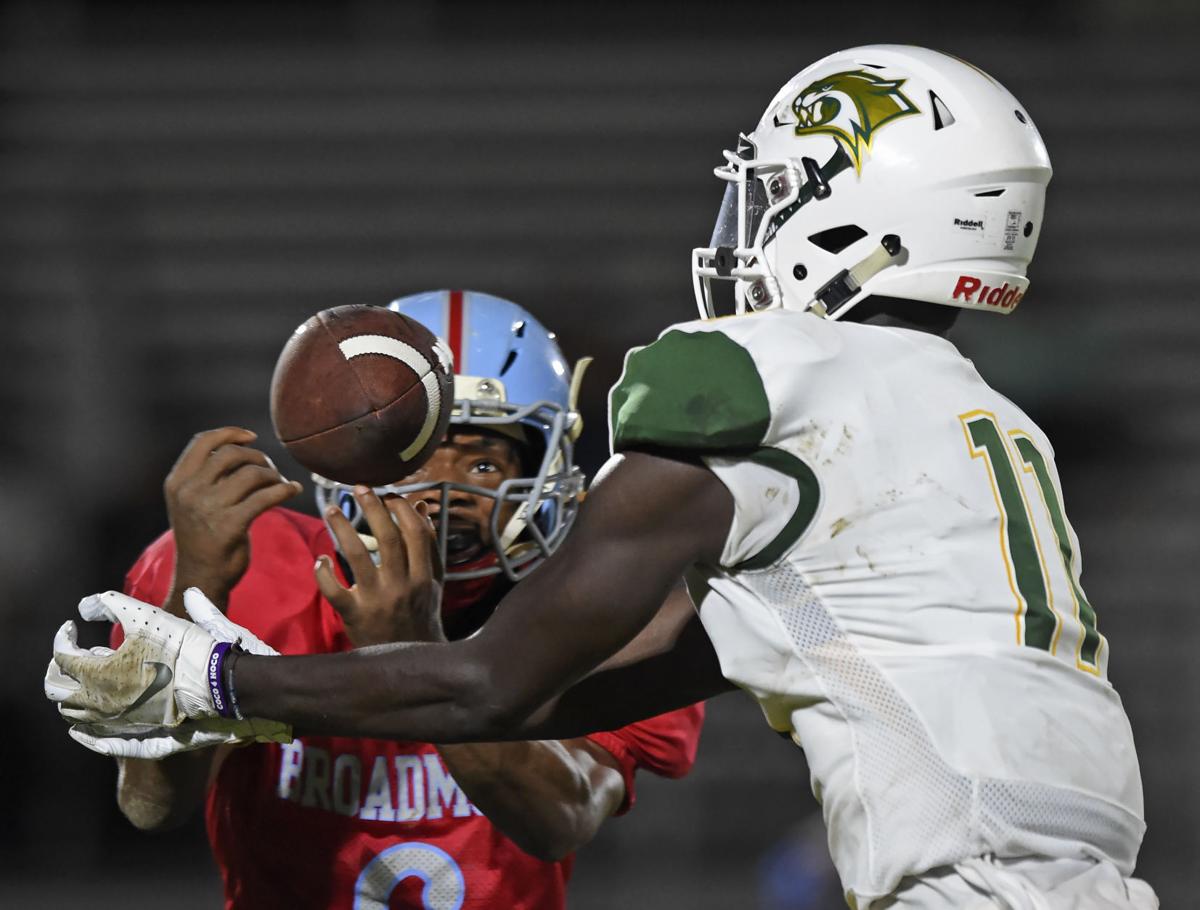 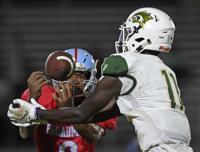 Broadmoor's Donald Jones (6) and Walker's Brian Thomas Jr. (11) vie for the ball on a pass intended for Thomas during a 2018 game. 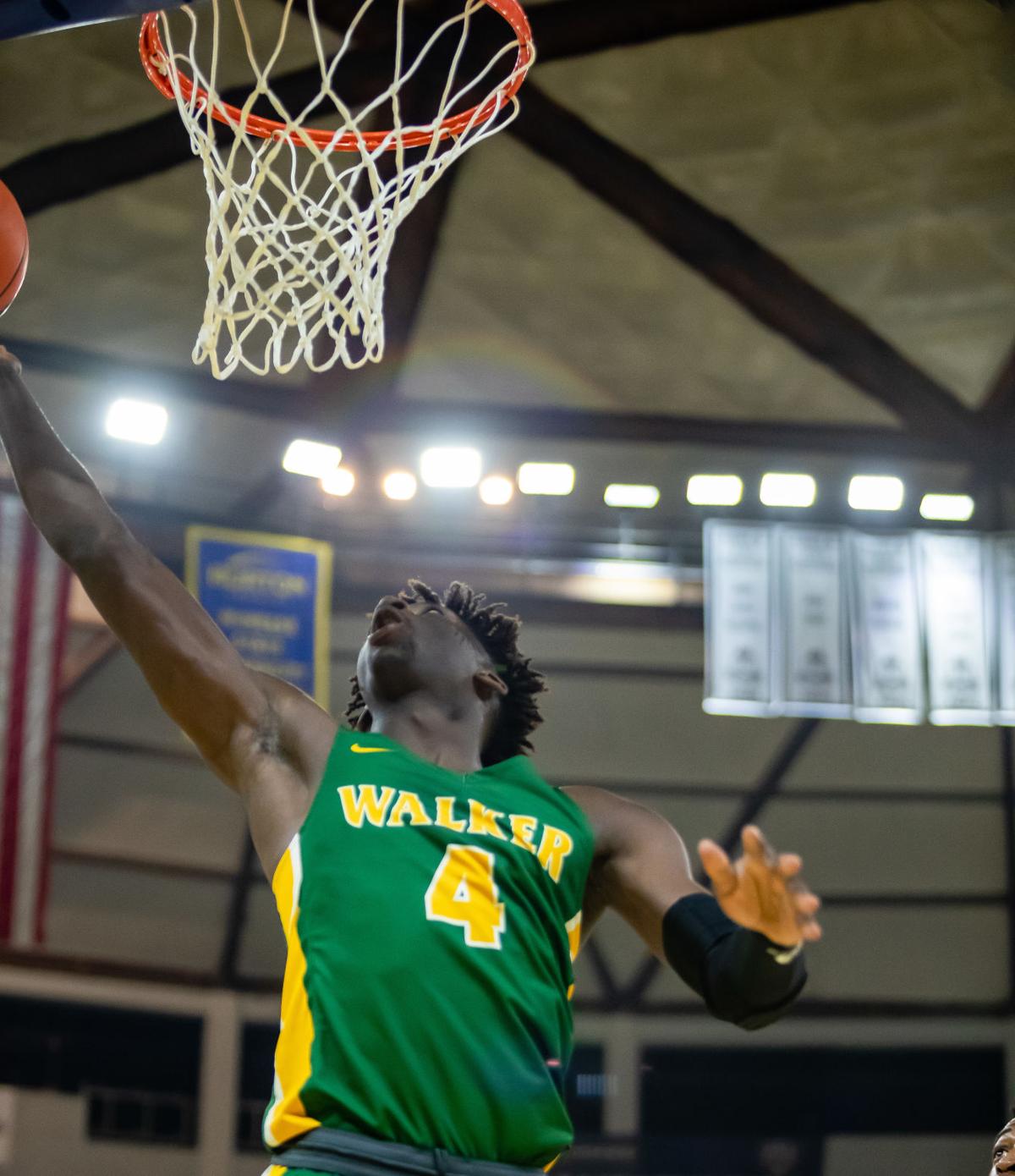 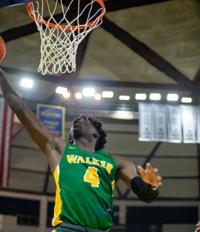 Walker's Brian Thomas Jr. makes the lay-up against Bonnabel during the LHSAA Marsh Madness Class 5A Semi-Final at Burton Coliseum in Lake Charles, Louisiana on March 11, 2020.

Broadmoor's Donald Jones (6) and Walker's Brian Thomas Jr. (11) vie for the ball on a pass intended for Thomas during a 2018 game.

Walker's Brian Thomas Jr. makes the lay-up against Bonnabel during the LHSAA Marsh Madness Class 5A Semi-Final at Burton Coliseum in Lake Charles, Louisiana on March 11, 2020.

Anyone who follows Walker High sports knows that the athletic career of two-sport standout Brian Thomas Jr. is winding down at the high school level.

The Walker football team, 1-6 with one week left in the regular season, will need lots of help to reach the LHSAA playoffs. Thomas, a wide receiver who is one of the top recruits in the state this year, will have decisions to make once the season ends.

Most football fans want to know how Thomas’ college recruiting saga will end. According to Thomas, three schools — Alabama, LSU and Texas A&M — are still in the running for his services. But, before he crosses that threshold, a different decision awaits.

Thomas will have to decide if he will play his senior season on the basketball court.

“I don’t know yet,” Thomas said before last week’s football game against Denham Springs. “Since I’m going to college for football I wouldn’t want to go out and get hurt, but there’s a chance of that playing football (this season). There’s chance of that just doing anything.”

Basketball is where Thomas first made his mark on Walker athletics, a sport well-suited to the 6-foot-4 frame he was still growing into as a ninth-grader in 2018. Still, on a Walker team that went 33-4, Thomas was an immediate impact player. It was a season highlighted by winning the Class 5A championship, the school’s first basketball title.

All Thomas did was score 20 points and grab eight rebounds in a 62-57 overtime win over Landry-Walker in the title game. For his efforts, Thomas was named the game’s most valuable player.

In 2019, Walker earned a return trip to the championship game. This time, the Wildcats came up short, losing 70-60 to Thibodaux, but Thomas again was at his best. He led all scorers with 29 points and pulled down eight rebounds.

Walker’s run last season ended in the state semifinals. The Wildcats lost 65-60 to Bonnabel despite 22 points from Thomas.

Thomas’ favorite basketball season was his freshman year, but not just because it was a championship season.

“Being with all of the older guys, that was probably my favorite year” Thomas said. “I had been knowing them since I was 6 or 7 years old, so being with them, building more memories with them, that was a very fun time.”

“I was kind of small (as a freshman), so my dad wanted me to wait a year (to play football),” Thomas said. “I played basketball and had a pretty good freshman year, but I always loved football the most.”

As in basketball, Thomas made an immediate difference on the football team. In the first game of the 2018 season, he caught four passes for 218 yards and three touchdowns. The touchdowns came on plays of 89, 63 and 75 yards, and all three were tunnel screen passes.

Thomas’ ability to create yards after he catches the football is what has impressed Walker football coach Chad Mahaffey the most.

“He has a unique blend of explosiveness, strength and physicality,” Mahaffey said. “He’s a good route runner, strong to the ball with his hands, can elevate, and for a big guy he’s really good after the catch. He’s not a straight line guy. He’s just tough to tackle.”

Thomas’ high point this season came against St. Thomas More, when he caught 10 passes for 155 yards and a touchdown. He also totaled 70 yards on two kickoff returns. For the season, he has 32 receptions for 551 yards and seven touchdowns, and two rushes for 46 yards and two touchdowns.

As much as the numbers, it has been Thomas’ ability that has caught the eye of football and basketball coaches. He drew interest as a basketball recruit from programs at Florida, Houston and Tulane, but football offers started coming in when he was a sophomore.

“I chose football (over basketball) because I’ve loved it since I was a kid,” Thomas said. “To add to it, I started getting offers from schools like Alabama and LSU, all of the big-time Power Five schools in football.”

If he so chooses, Thomas will have one more season playing basketball before he moves on to college football.