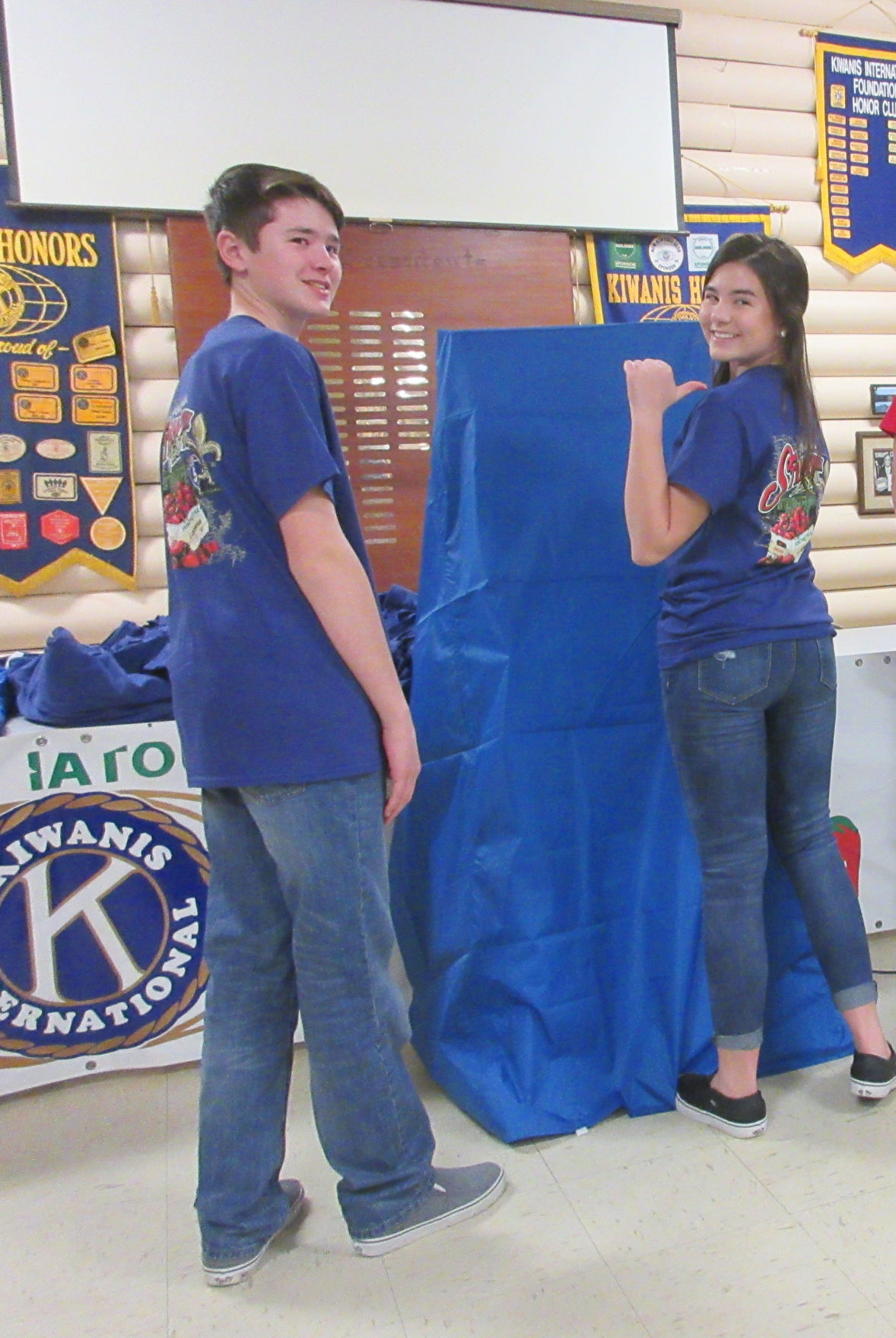 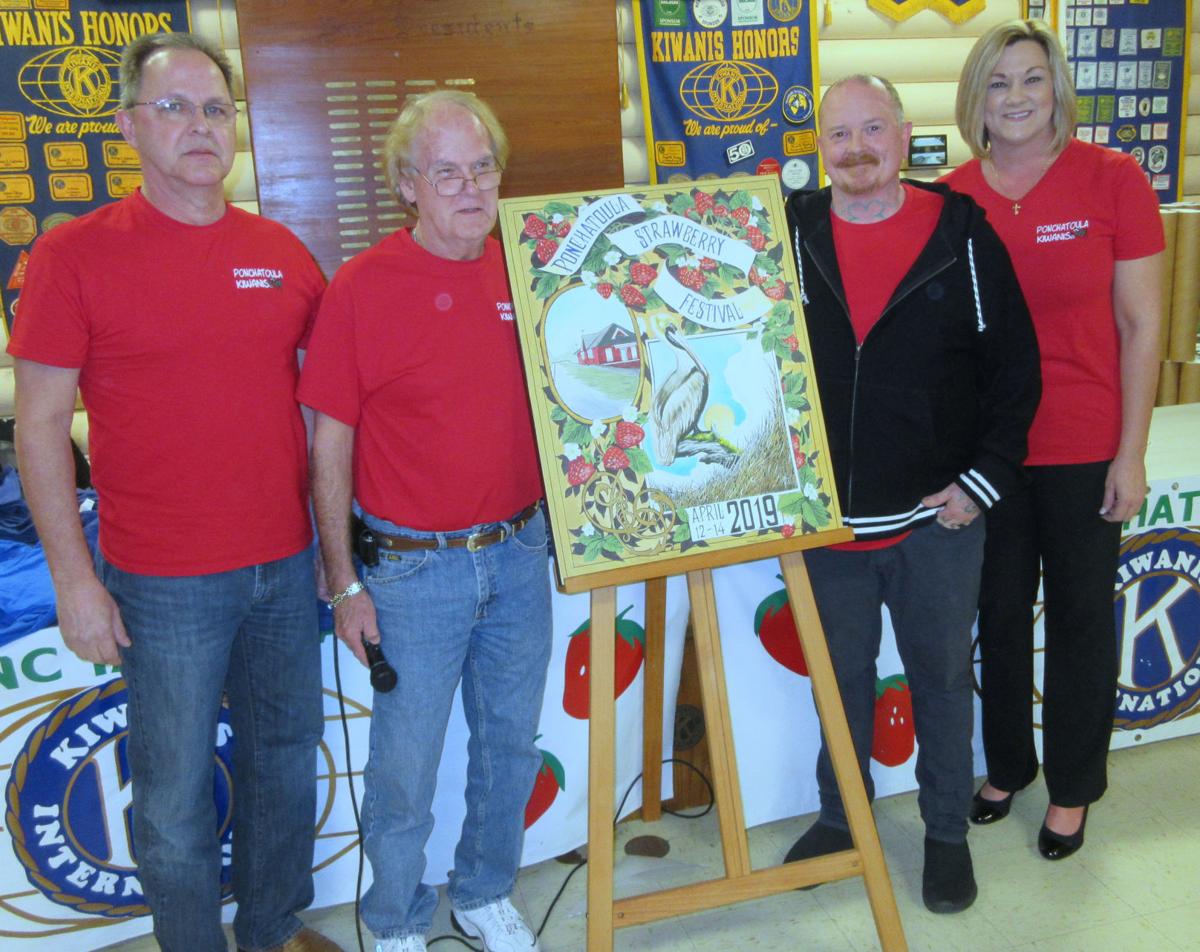 Participating in this year’s unveiling of the official 2019 Ponchatoula Strawberry Festival poster are, from left, Brian Steib, president of the Ponchatoula Kiwanis Club; Darrell Rousseau, club member; poster artist Matthew Moore; and Shelley McNemar, club member. This year’s poster was unveiled in ceremonies held at the Kiwanis Log Cabin on March 7. This marks the 48th year that the Kiwanis Club has sponsored the poster contest and the selling of the popular collectors’ items. 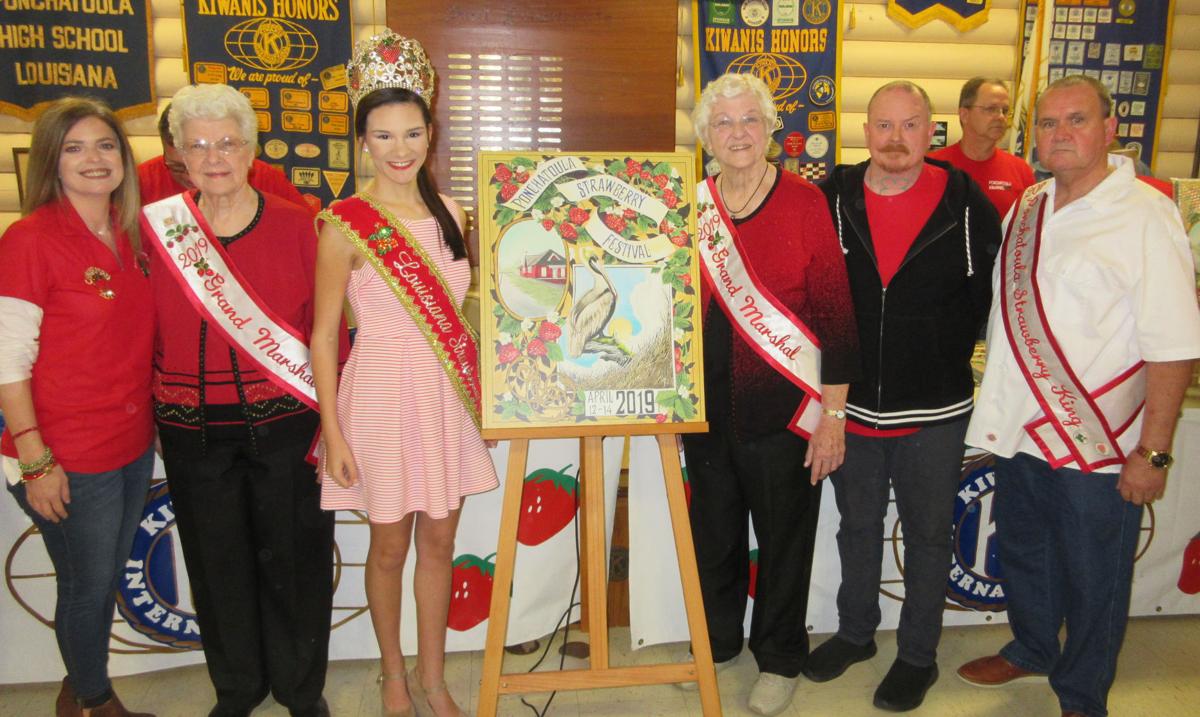 Participating in this year’s unveiling of the official 2019 Ponchatoula Strawberry Festival poster are, from left, Brian Steib, president of the Ponchatoula Kiwanis Club; Darrell Rousseau, club member; poster artist Matthew Moore; and Shelley McNemar, club member. This year’s poster was unveiled in ceremonies held at the Kiwanis Log Cabin on March 7. This marks the 48th year that the Kiwanis Club has sponsored the poster contest and the selling of the popular collectors’ items.

PONCHATOULA — Loud cheers and applause filled the Kiwanis Club Log Cabin as the official 2019 Ponchatoula Strawberry Festival poster was unveiled March 7 before a standing-room-only crowd of fans of the posters that have been a major facet of the festival for the past 48 years.

This year’s poster features a bounty of bright, red strawberries; a brown pelican, Louisiana’s official state bird; and the historic Ponchatoula train station from which countless thousands of crates of strawberries were shipped each year during the height of the strawberry industry that spanned the early to middle years of the 20th century.

The poster was created by Matthew Moore, a self-taught artist whose works can be seen as murals in various restaurants and coffee houses in Ponchatoula, Hammond and New Orleans. Moore also paints portraits in oils and acrylics. The versatile artist also creates pictures with chalk, pencil and crayons.

In describing Moore, Darrell Rousseau, a member of the Ponchatoula Kiwanis Club committee that chose the winning poster in this year’s contest said, the "artist seeks mastery and understanding through his art. His attention to detail of his subject, his expert sense of composition, his color choices and just his raw talent is astounding.”

Moore’s poster was chosen from 12 entries. The Ponchatoula Kiwanis Club has conducted the poster contest and has been responsible for selling the popular collector’s items, since the inception of the Ponchatoula Strawberry Festival.

Rousseau said that each year creating something new for the festival poster gets more and more difficult. “There’s only so much about the  strawberry industry and our community of Ponchatoula that you can depict on a poster. After all these years, it’s getting harder and harder for our artists to find something new. However, each year, we end up with a beautiful poster that is appreciated by the hundreds who buy the poster. This year’s poster is bright and colorful and will fit in with just about any décor,” Rousseau said. He noted that many of the artists who have created the posters over the years have gone on to rewarding careers in the field of art and art education, and many of the posters are now hanging on walls in homes and offices throughout the nation.

The festival's 2015 poster sparked controversy for depicting two black children ringed by strawberries and carrying a basket of the fruit. Their faces were featureless except for pairs of bright red lips. Some viewers said the painting resembled racist caricatures of black people, and the head of the local NAACP branch called it offensive and distasteful, according to a 2015 Advocate story.

The posters are on sale in the traditional large format and in a smaller version. The posters went on sale Thursday following the unveiling and will be on sale at the festival which is scheduled for April 12-14 this year. Posters can be purchased before the festival by contacting a member of the Ponchatoula Kiwanis Club. Proceeds from the sale of the posters are used by the Kiwanis Club for the numerous community service programs supported by the club.

At the same gathering this year’s official T-shirt was also presented. The art work featured on the shirts was the work of local artist Diane LeBlanc. The shirts, now on sale, will also be available during the festival.

Royalty and dignitaries of this year’s festival were presented at the poster unveiling. Reigning as king this year is Lester Settoon, a lifelong resident of Ponchatoula. The businessman has been a volunteer fireman for 30 years and has a record of service to the community in various capacities. Festival queen this year is Heidi Carrier, a student at Southeastern Louisiana University. She won the title in a pageant conducted earlier. Serving as grand marshals this year are sisters Geraldine Wright and Ann Boudreaux. The sisters started the popular Southeast Louisiana Quilt Trail. The Quilt Trail, comprised of several hundred large painted “quilt squares” that grace buildings throughout the Florida Parishes, attracts visitors and tourists each year.

Serving as Strawberry Festival Chairman this year is Stacey Miller. Miller said that the festival committee is expecting about 300,000 visitors this year. “We are the largest free festival in the state and we attract more visitors than other festival in Louisiana with the exception of Mardi Gras. Once again we anticipate a great festival. We do a great job every year of handling the huge crowds that come to the festival and we anticipate the same success this year that we have enjoyed in past years,” she said.

The festival will again feature live music throughout the three-day run. The festival opens to the general public at noon on Friday, April 12, and closes at 6 p.m. on Sunday, April 14. Miller said the festival's strawberry auction, a popular attraction each year, will be conducted at 4 p.m. Saturday, April 13. Local banks and businesses bid on the flats of strawberries submitted by local farmers each year. Miller said that all proceeds from the auction go directly to the farmers.

The festival parade rolls down Ponchatoula’s main street at 9:30 a.m. on April 13. “We will have our usual contests such as the strawberry eating contest, the egg toss and other events. On the fairgrounds, which is Memorial Park and part of Sixth Street, will be about 70 booths manned by nonprofit organizations featuring just about every type of food that you can imagine. The nonprofit groups that sponsor the booths use the proceeds to do community service throughout the year. This is our big party and once again, the people of Ponchatoula are sending out an invitation to everyone to come to Ponchatoula and enjoy our festival,” Miller said.

The town of Ponchatoula celebrates its local crop at its annual Strawberry Festival April 12-14. There is a parade, strawberry pageant royalty…