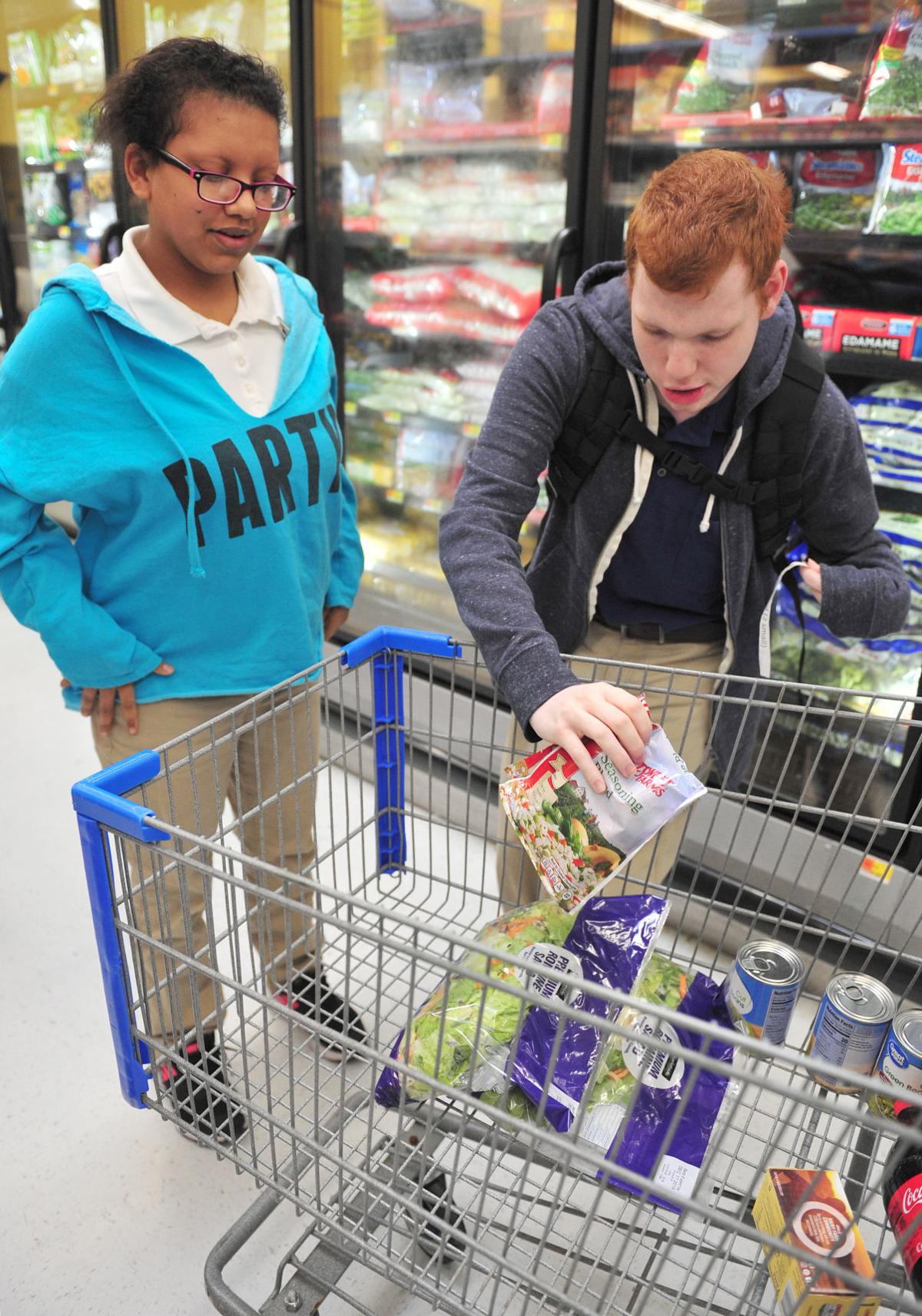 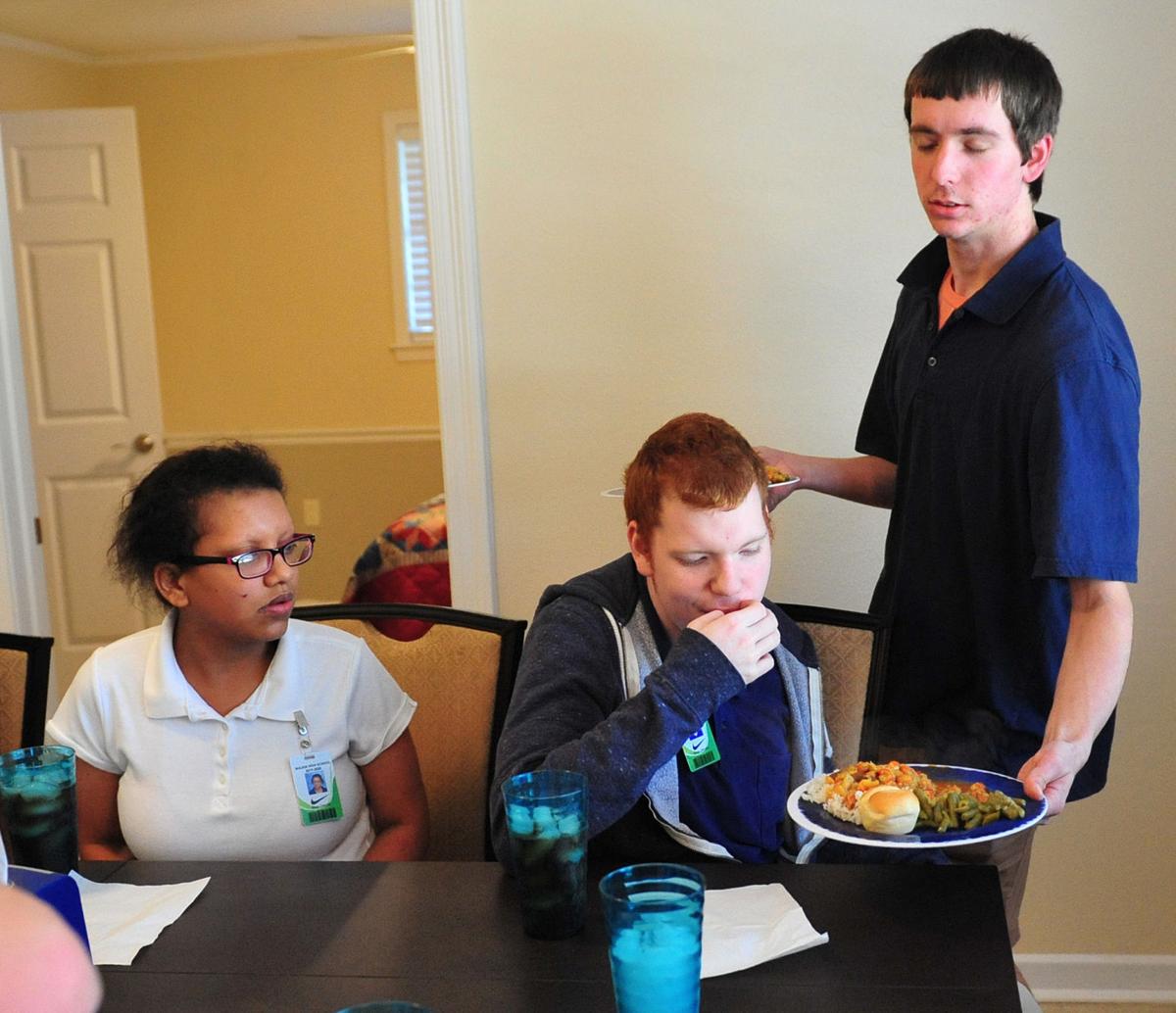 Jadon Mercier, hands Ethan Johnson, a plate of crawfish etouffee while Alisa Castille waits for hers. 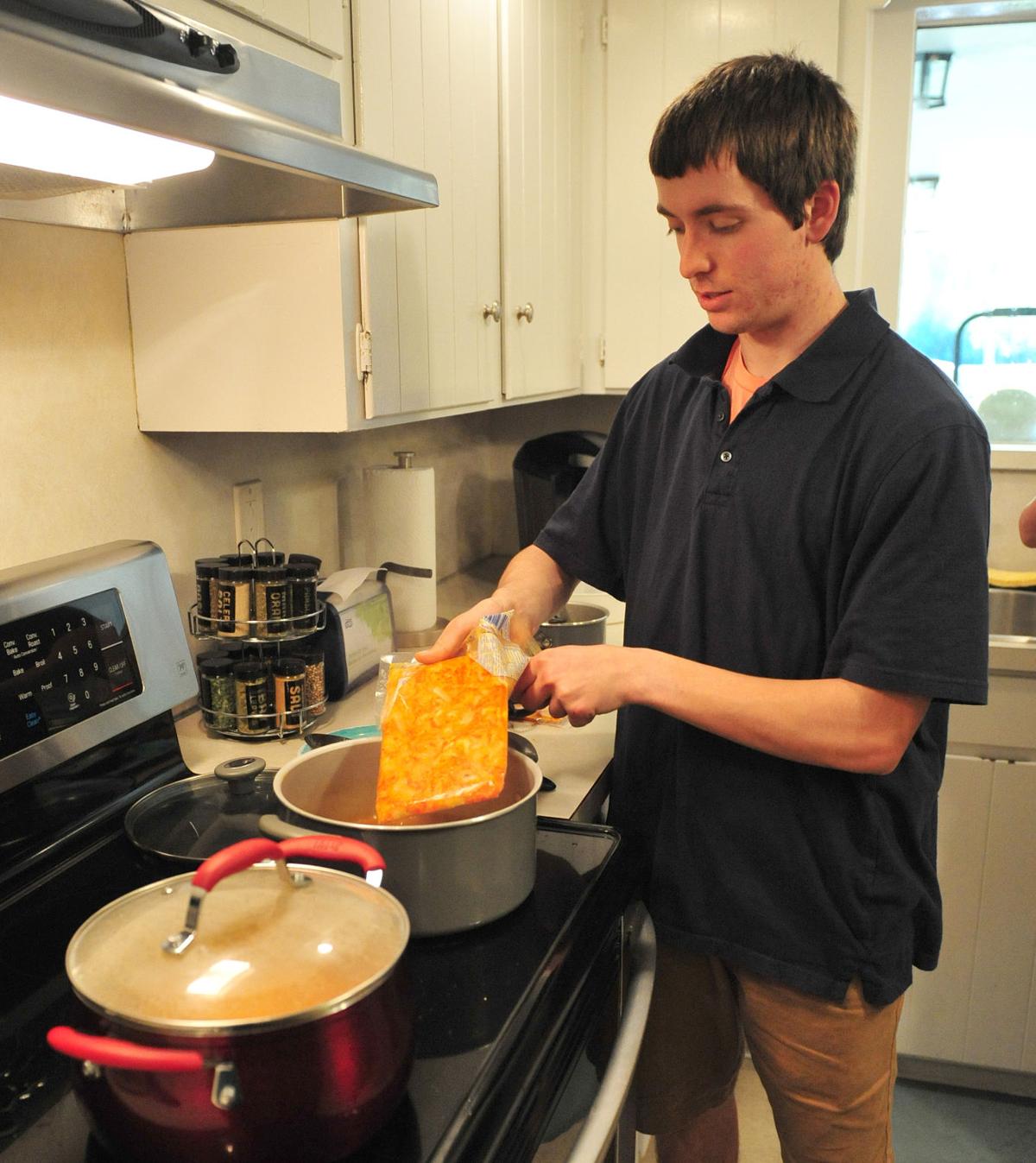 Jadon Mercier drops a package of crawfish into a pot. 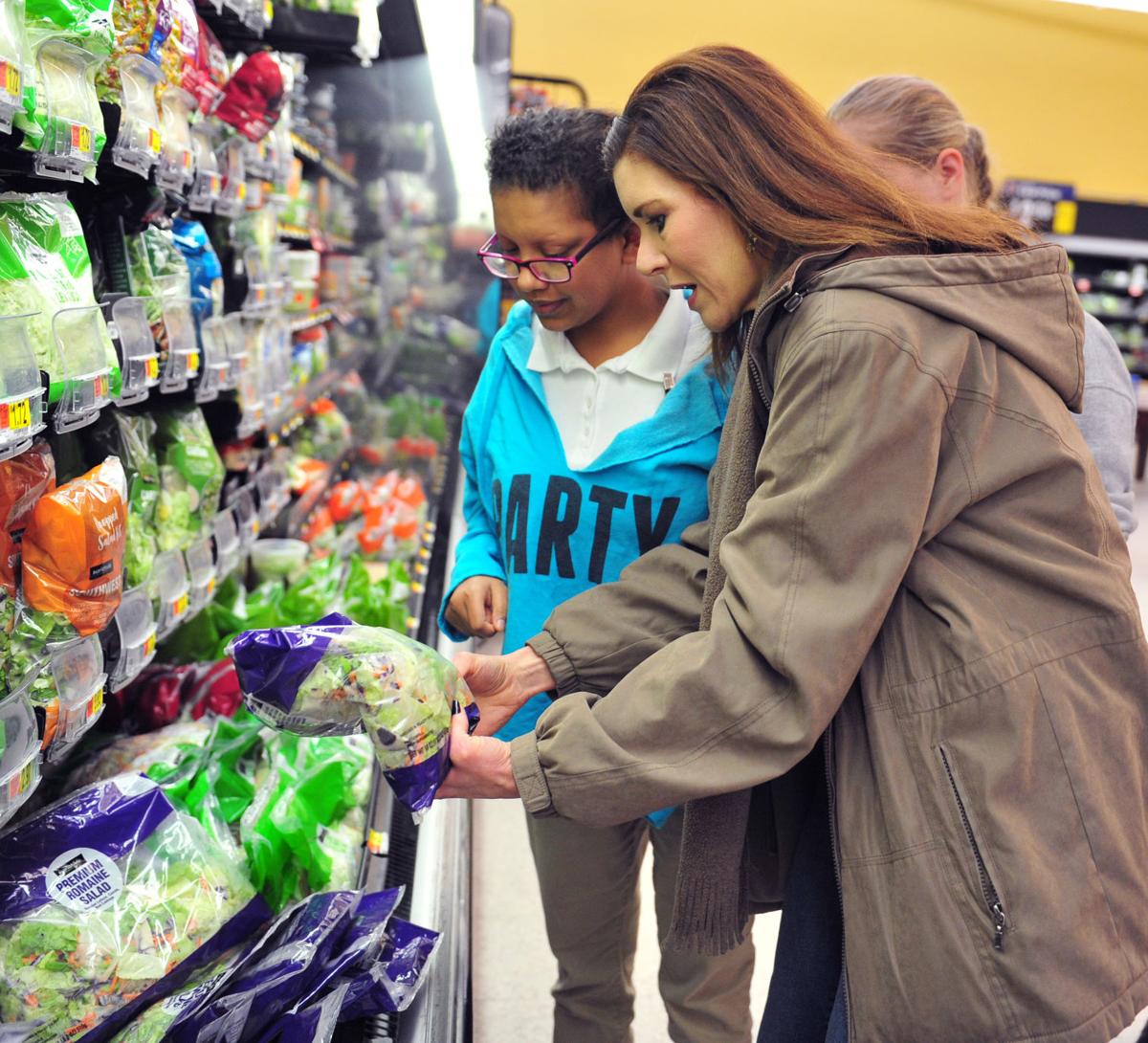 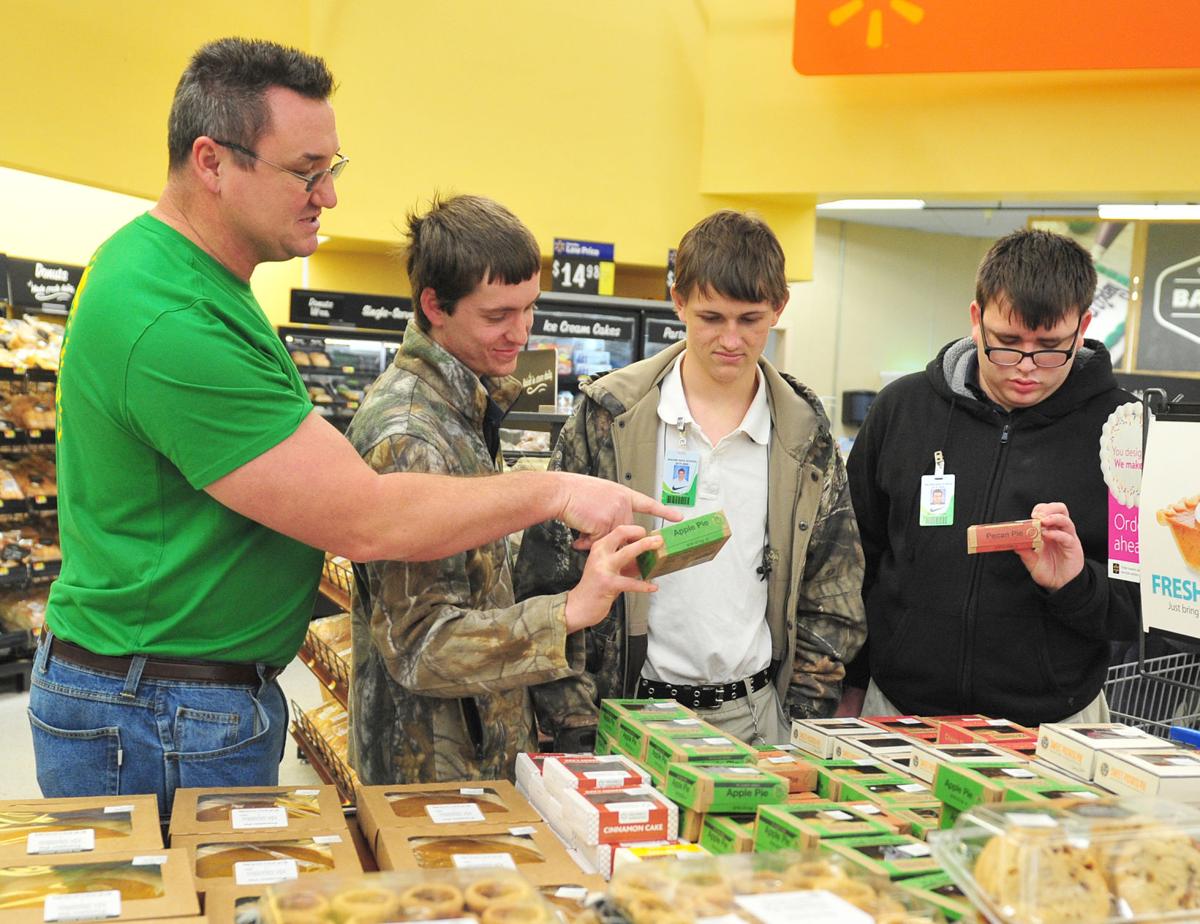 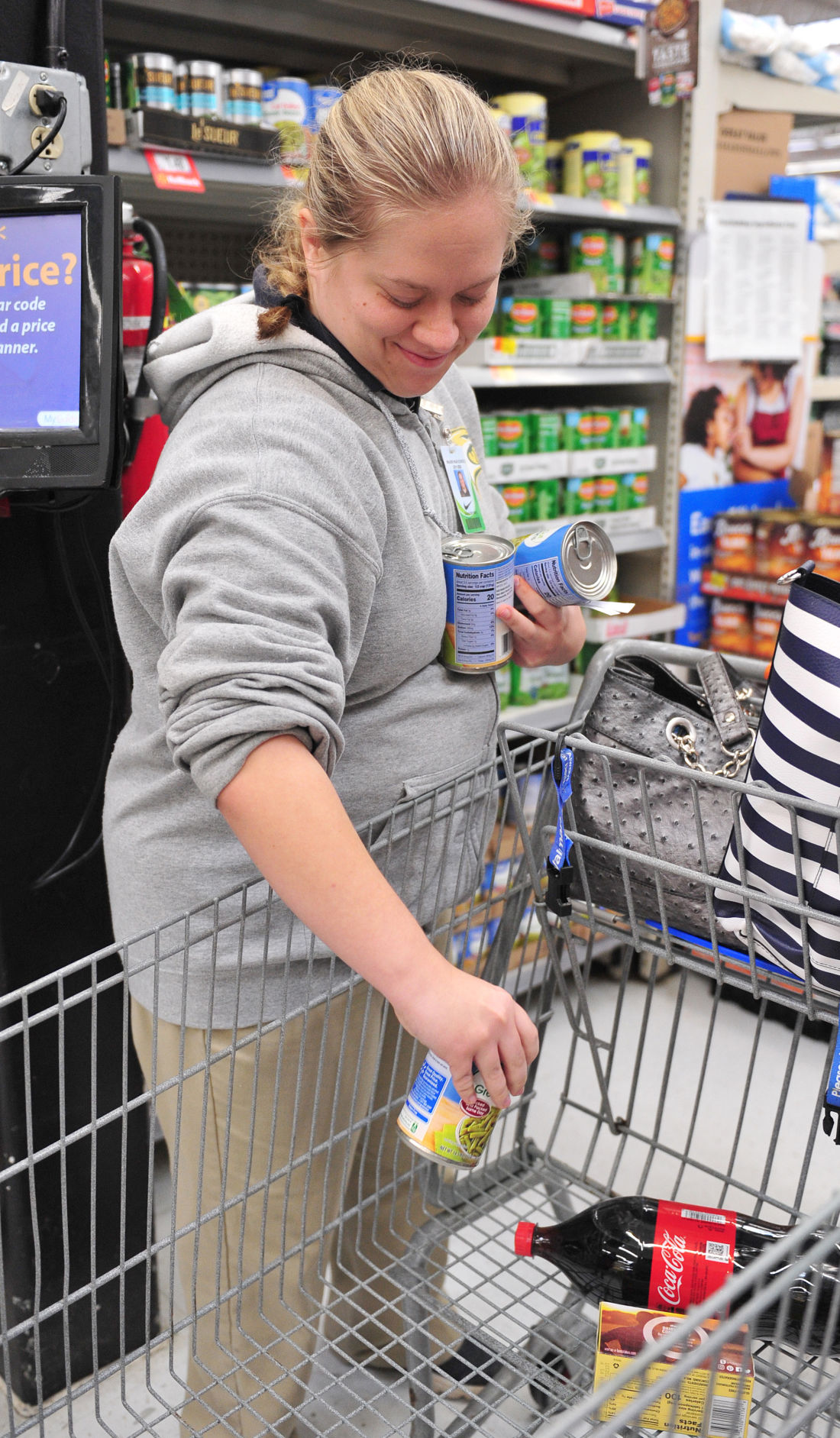 Briana Normand puts cans of green beans in her cart.

Jadon Mercier, hands Ethan Johnson, a plate of crawfish etouffee while Alisa Castille waits for hers.

Jadon Mercier drops a package of crawfish into a pot.

Briana Normand puts cans of green beans in her cart.

The freezer aiLedouxle of a Walmart isn’t often thought of as a hub of education, heartwarming interactions or the development of social skills.

But when Walker High School student Briana Normand finally found the bags of Season Blend vegetables and swung her long blond braid around to wave her arms at her teacher in excitement, that’s exactly what it became.

“Yay, we found them, Ms. Voss,” she said, dropping the beginnings of a crawfish étouffée into the cart, clapping and proudly smiling to herself.

Normand, a special-needs student, takes trips like this to the local Walmart often as part of a Livingston Parish School District life skills class that allows high school students a chance to experience interactions like grocery shopping, going to the laundromat or household chores before they’re out on their own someday.

“We want them to know that whatever we do here they can do at home and that’s the whole idea," teacher Shannon Voss said. "We want them to transition those skills from school to home.”

On this excursion, Normand and her classmates were each designated an ingredient or two for the étouffée feast and had to find the item on their own without the help of Voss  or their other teacher, Chris Ledoux.

The pre-holiday shopping rush can easily overwhelm any customer, with its bright lights, clatter of carts and the sheer number of options for something so simple as a bag of frozen vegetables. But for Normand and her classmates Alisa Castille and Ethan Johnson, it wasn’t hard to tune out the other noise and focus on what they were trying to do.

Though there were a few misdirections, backtracks and a quick pit stop to lament the return of possibly E. coli-contaminated Romaine lettuce on the shelves, the three were in and out of the store within 30 minutes.

That time frame even included the pause to speak with an older lady who stopped the group to ask what they were planning to make, recognizing them as students. She hugged them all and wished them luck.

“This is fun,” Normand said, beaming at the others.

The students each paid for their items individually, selecting how much cash they’d need and estimating the change they’d receive. They put their items on the belt, greeted the cashier and were responsible for their own bags making it onto the school bus with them.

They returned to nearby Ferrington Place, which has recently become their home base. The Florida Boulevard apartment building in Walker was purchased by the city a few months ago for the special-needs community, offering activities like bingo and other social events for adults at night and students like Walker High School’s class during the day.

The facility is equipped with a kitchen, living room, dining room, bedroom, laundry and everything else a regular apartment would have, and gives them a trial run at the countless chores they’ll need to master later on.

“The kids love it,” Voss said. “We do all kinds of different skills like sometimes for example we’ll do safety lessons where we come ahead of time and set out safety hazards they need to identify and tell us what we should’ve done instead.”

They use the laundry, they wash and dry their dishes each time they visit and learn how to make a bed or set the table.

The school district has two of these types of apartments already — one in Springfield and one in Denham Springs — but the recently opened Ferrington Place gives the Walker students an easier-to-access location and frees up space to use the other apartments for middle school classes, said April Morgan, the district special-education transition coordinator.

In one instance, Morgan said, these types of real life scenarios helped a Holden family use a laundromat after the 2016 flood. The family went to a coin laundry when their home was flooded but the parents hadn’t ever used a facility like that, so their special-needs child stepped up and operated the machines after having learned how to do so in class.

Morgan’s job with the district is to help special-needs students up to age 21 build the skills they’ll need to live on their own and get a job. Their metrics are measured differently than other students, and their path to graduation is lined with milestones and benchmarks that are individualized, meaning they graduate at different ages or grade levels.

The students are still technically in a school environment, but they are out in the community and having their own experiences. That provides a beneficial middle ground to ease the transition later, Morgan said.

“It’s just like a regular house,” Voss said of the students’ cooking space at the Ferrington Place, “we want them to know you can cook something that’s not throwing a pizza in the oven or cooking a Pop Tart or something like that.”

On this particular day, with Ledoux’s own personal crawfish étouffée recipe in the works, the students each took on a role to make sure they had a part in the final product.

The pride they took in making something themselves was clear, with some even declaring through a cloud of crawfish steam that they’d be recreating the recipe at home the very next day.

The passion and patience of the teachers is just as obvious as the pride of the students, evident by Ledoux’s booming directions to keep each makeshift ingredient station moving ahead.

“Okay, in 7½ minutes we’re going to put in the golden mushroom soup, and that’s the key to this recipe,” he says, winking.

“Shhh,” Normand responds quietly, as if his revealing the secret ingredient out loud may ruin the whole thing.

Ultimately, within a couple of hours, the class had shopped for and paid for the ingredients, prepared and cooked them and produced a sit-down meal with drinks, salad and dessert. They ate together at the dining table with their teachers like one big family.

The kids at Ferrington Place that day range in age, time left before graduation, ability level and future aspirations, but one thing’s certain: They’ll come out the other side of high school with a little more confidence and making a mean crawfish étouffée.

Many of Walker High School's students with special needs will get their first job at a PJ's coffee location on campus.