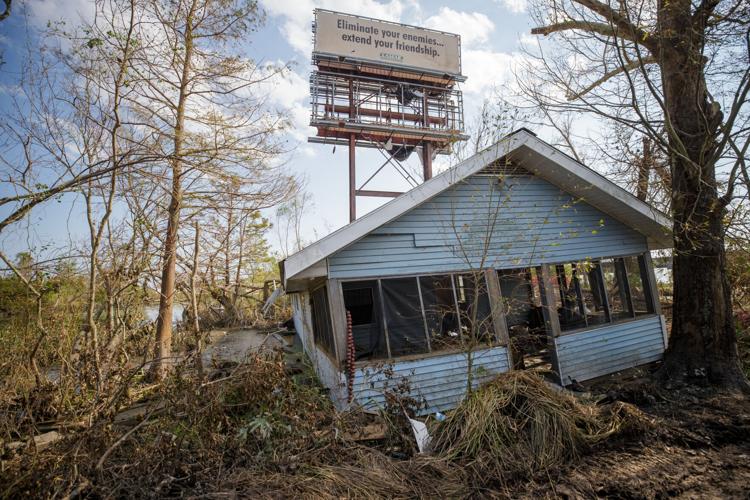 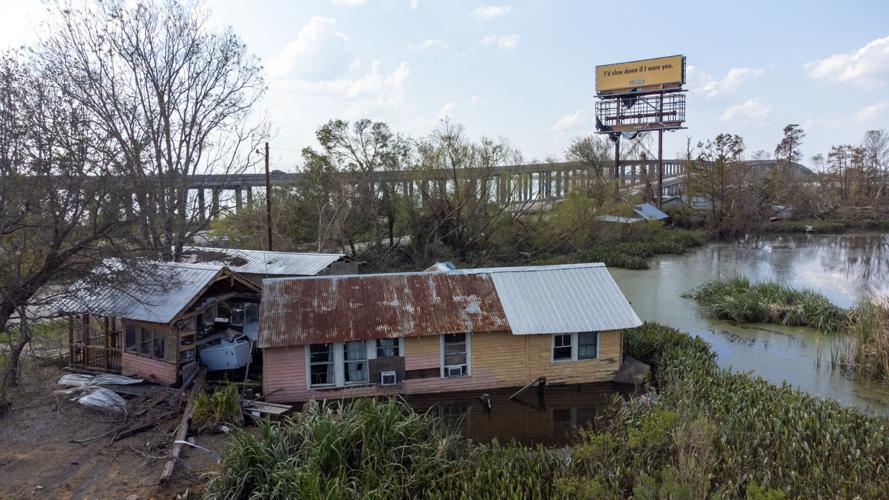 A house is knotched of it's foundation after Hurricane Ida storm surge in Manchac, La. Saturday, Sept. 4, 2021. (Staff photo by David Grunfeld, NOLA.com | The Times-Picayune | The New Orleans Advocate) 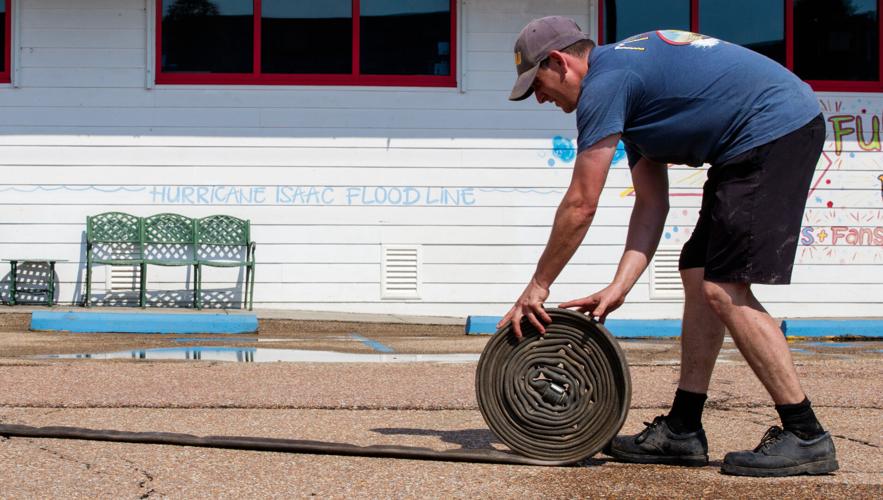 Adam Greenhouse, the kitchen manager at Middendorf's rolls up a hose after cleaning the parking lot during the aftermath of Hurricane Ida in Manchac, La. Saturday, Sept. 4, 2021. (Staff photo by David Grunfeld, NOLA.com | The Times-Picayune | The New Orleans Advocate) 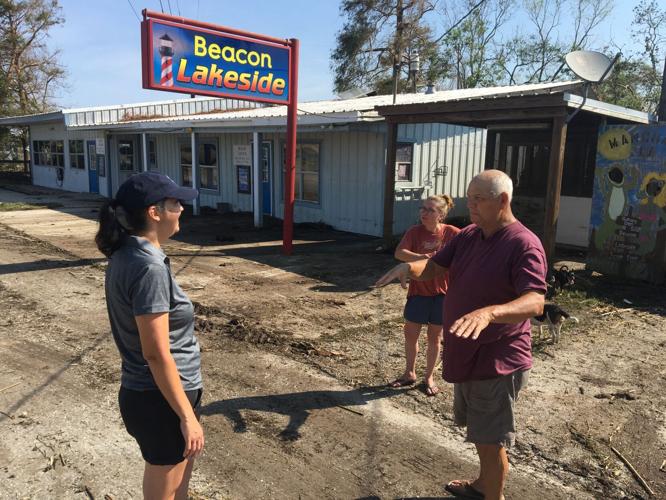 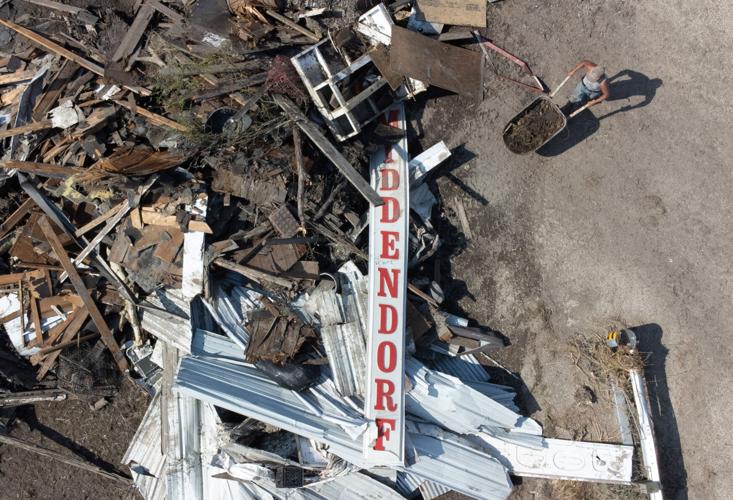 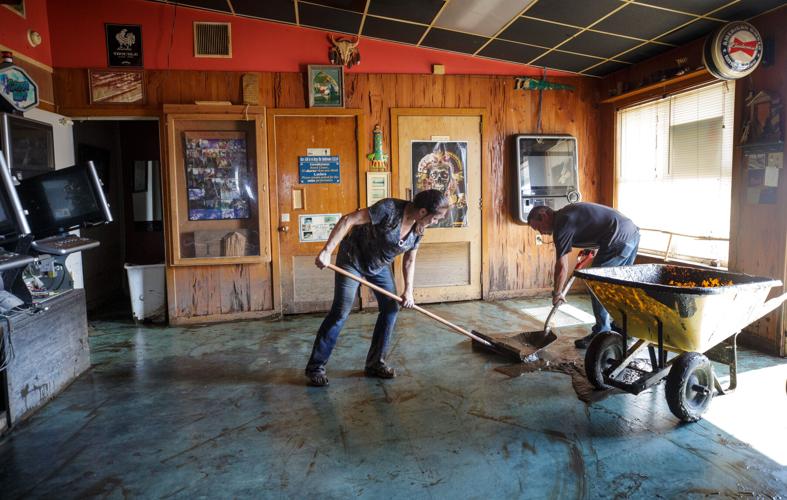 Leslie Martin, left and Eric Jordan scoop up marsh mud from the floors at the Lighthouse Bar in Manchac, La. Saturday, Sept. 4, 2021, after storm surge from Hurricane ida deluged the area. (Staff photo by David Grunfeld, NOLA.com | The Times-Picayune | The New Orleans Advocate) 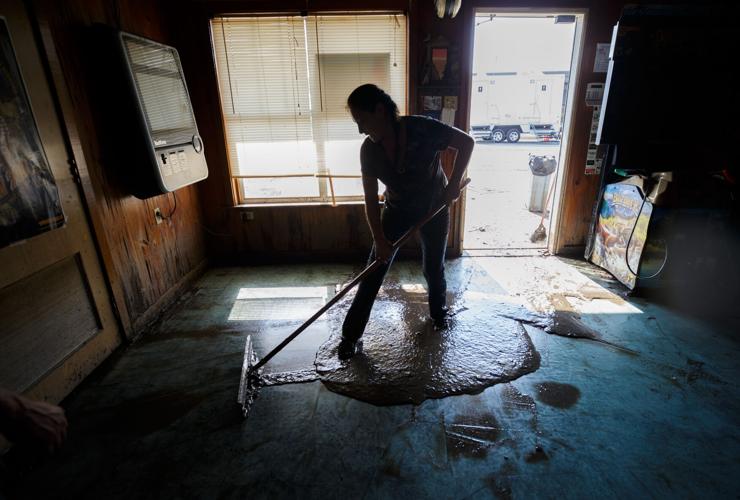 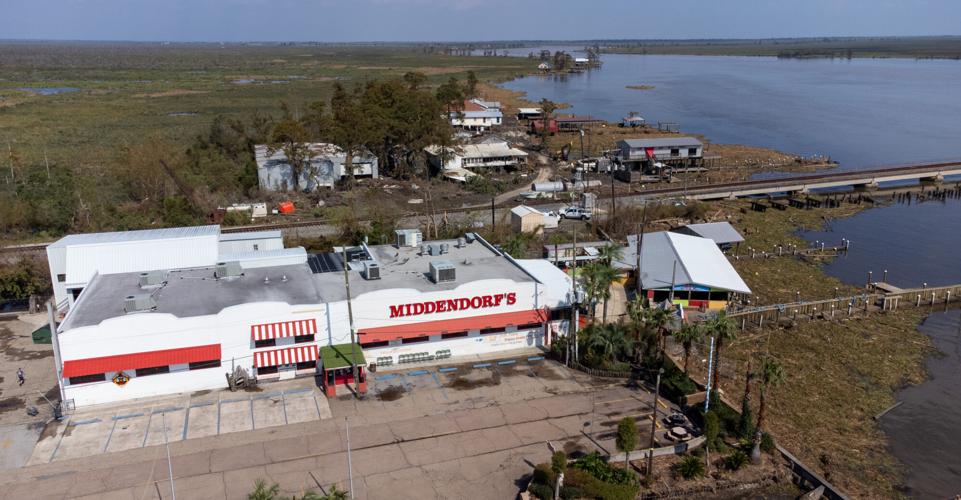 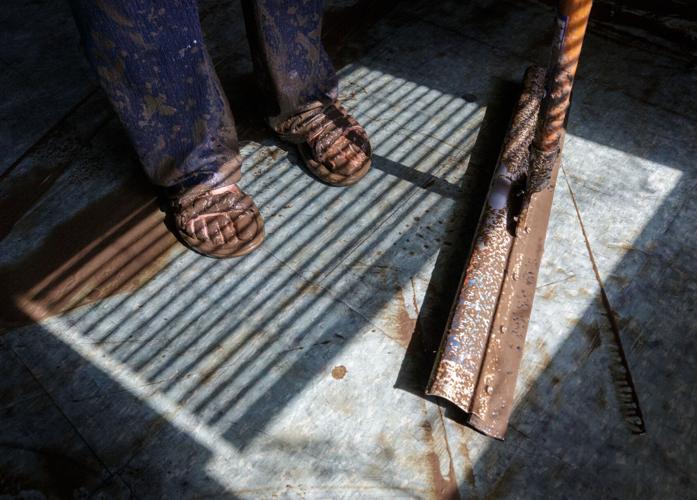 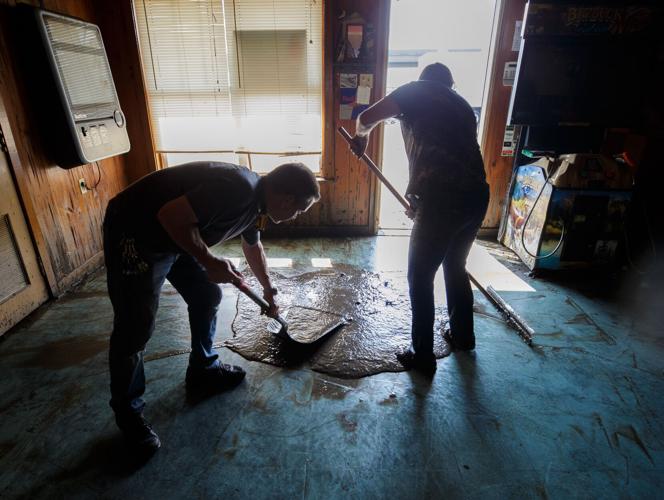 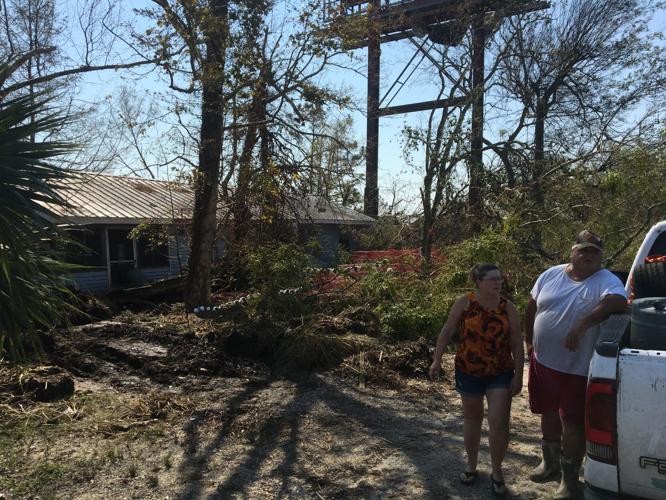 After a lifetime on Lake Maurepas' northeast shores, crab fisherman William "Billy" Bates is no novice to hurricanes. But nothing prepared him for Hurricane Ida's fury.

Before the storm hit, he closed up his powder blue house near the Manchac Swamp Bridge and went 11 miles north to ride out the storm at his sister's home in Ponchatoula.

When he came back, not only was the little house sagging and tilting to one side — it had been picked up and moved some 10 feet east of where it was built.

For most of the Baton Rouge area, Ida was a wind event, not a flooding disaster. But the hurricane churned up 8 feet of storm surge at some spots on Lake Maurepas’ north shore — where it only takes about 3 feet to cause floods.

Coupled with winds that exceeded 100 mph, that wall of water wrenched Bates’ home from its foundation.

“It fills me with depression,” the fisherman said, as he stood in a tangle of branches, orange crab traps and thick black mud.

Bates was preparing to hack away at branches and start salvaging what he could from indoors. But the damage was steep. In the tilting living room, an inch of the noxious-smelling mud gummed a mess of tools, bait containers, clothes and trash to the wooden floor.

Ida devastated Tangipahoa Parish, leaving Hammond residents without fuel and some Ponchatoula residents without water five days after the winds slowed. Spotty cellular service has made communication a constant battle.

A representative from Entergy said Friday that Tangipahoa might not see power fully restored until Sept. 22.

It seems no place in the region faces a longer path to recovery than Manchac, which straddles the southernmost pocket of Tangipahoa and the northwest tip of St. John Parish along Lake Maurepas’ northeast shore.

The unincorporated community with fewer than 30 full-time residents consists of fishing huts, a few bars and restaurants and “camps” — homes that rise on stilts above the North Shore swamps. A tight-knit place of mostly working and middle-class people, its residents have tried to keep out development and preserve its wetlands.

Manchac was the first place where the winds and storm surge struck Tangipahoa Parish. The hurricane packed enough power to rip at least two other homes besides Bates’ off their foundations.

Tangipahoa Parish President Robby Miller on Aug. 27 urged all residents who live south of La. 22 to flee the hurricane's path.

“The water was worse than Rita and about as bad as Isaac,” said George Coxen, chief of the Manchac Volunteer Fire Department, who stayed for the storm. "The wind was worse than both of ‘em.”

Hurricanes Rita and Isaac swept through here in 2005 and 2012, respectively. Locals speak about them as the most destructive to touch down in recent memory — until Ida.

On Sunday night, Coxen tried riding out the ornery weather in his house. When that structure filled with a foot of storm surge, he and his wife, Brandi Coxen, who runs a pair of bars near the lakeshore just yards from Bates’ house, headed to the fire station with their four small dogs.

The building sits across the street from Middendorf’s, a historic seafood restaurant. Water soon poured into the station, too.

The couple loaded the dogs into their pickup truck. With wind pummeling the vehicle, they drove through storm surge that rose to the truck’s headlights to the only high ground they could think of: the northbound Interstate 55 onramp that rises up from Old Highway 51.

They stayed atop the raised highway for hours, Brandi Coxen said, bracing themselves each time a gust would rock the truck. Once, they tried to open a door to give the dogs some fresh air. Wind nearly ripped it off its hinges.

The aftermath has been even worse than the storm.

The next day, the couple found their house ripped apart. It had gone “from a shotgun to an L-shape,” Brandi Coxen said. More camps along the swamp met the same fate.

Surveying the damage without ready access to food, water, electricity and air conditioning has been “like hell,” she said.

“It’s been like a never-ending camping trip, full of stress and upset,” she said.

Residents and environmental advocates have long feared that a powerful storm could wreak damage to Manchac's homes and fragile wetlands ecosystems.

Ponchatoula-area Tangipahoa Parish Councilwoman Kim Coates, who owns a camp on the lakeshore, entered local politics after founding the environmental group Save Our Manchac to oppose development at the Port of Manchac and nearby.

A main goal of those efforts was to preserve wetlands that formed a buffer against massive storm surge — like those Ida brought, Coates said.

The storm was a “worst-case scenario” for Manchac’s residents and marshland alike, she said.

“This is one of the scenarios I’ve been worried about,” Coates said. “You have a powerful storm with huge storm surge coming north, and rainfall, and all the creeks and the channels trying to empty into the lake, but the lake is too high and you have back flooding.

"Thankfully with Ida, the rivers crested below the forecast or we would have had thousands more flood."

Middendorf's owner had spent around $500,000 on a stone and concrete floodwall along the lakeshore and another around the building. But still, the storm surge poured several feet of water into the restaurant.

Part of Middendorf's roof sustained wind damage in the storm. But the dining room and kitchen are in good condition, owner Horst Pfeifer told The Advocate | The Times-Picayune. Pfeifer plans to reopen next weekend.

Bates, the crab fisherman, is uncertain how long recovering his home will take — or if saving it is even possible

He has another fishing hut in Plaquemines Parish, and while he hasn’t had time to see it, a friend there told him it survived.

“It’s so damn depressing, still,” he said. “I hope that I can raise this one, but I don’t know. That’s a long, drawn out process.”

As a landscaper, Dayna Cutrer is used to south Louisiana's scorching summer temperatures, but being without power or water since Monday is tes…