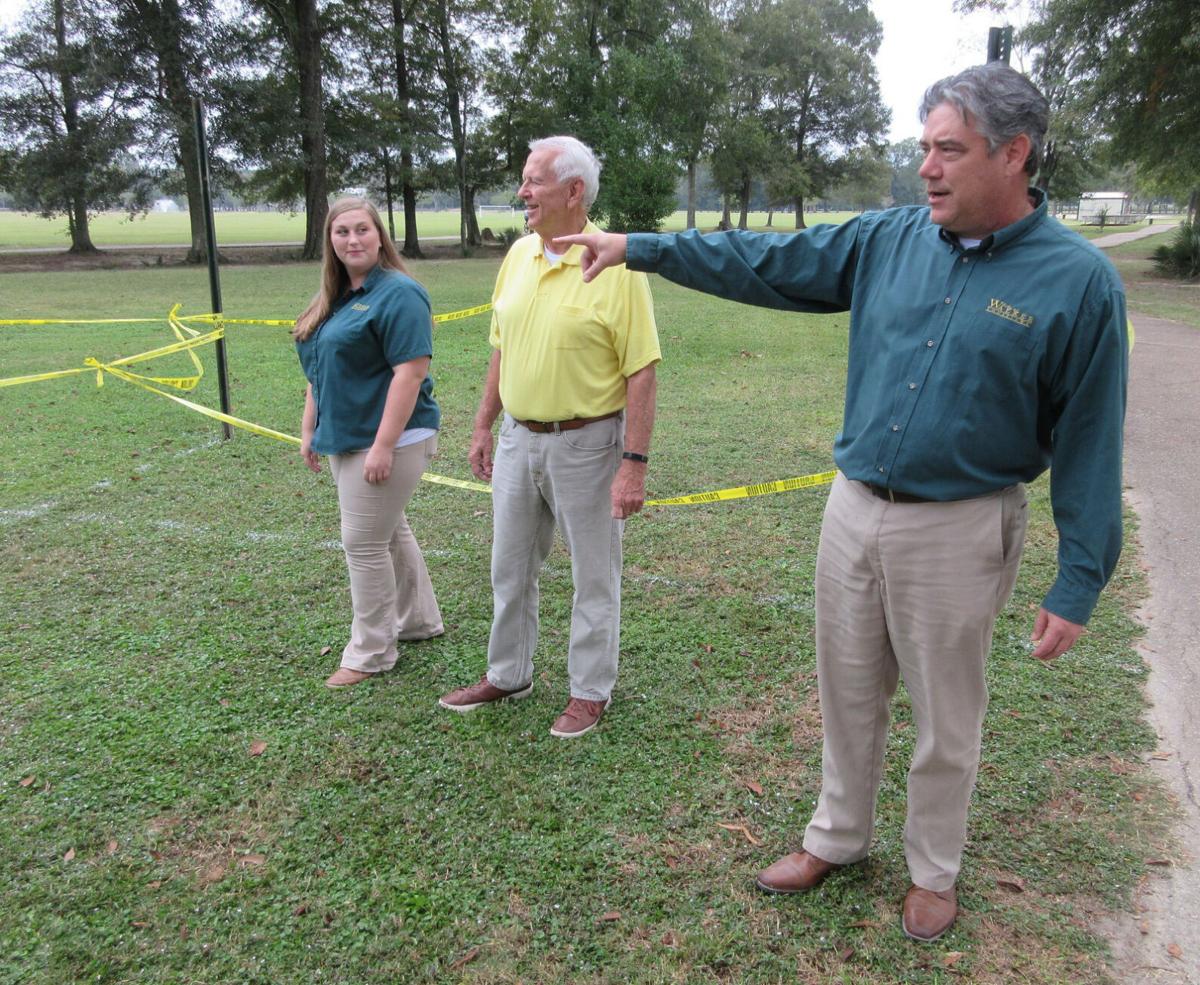 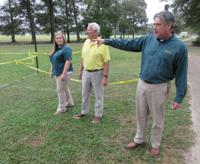 Mike Cotton, right, director of finances for the City of Walker, points out the location of a fitness area that will be built adjacent to the walking trail in Sidney Hutchinson Park, the city’s principal recreational venue. With Cotton are Kelsey Murray, grants writer for the city, and Mayor Jimmy Watson. Our Lady of the Lake for Livingston Parish partnered with the city to finance construction of the fitness area. 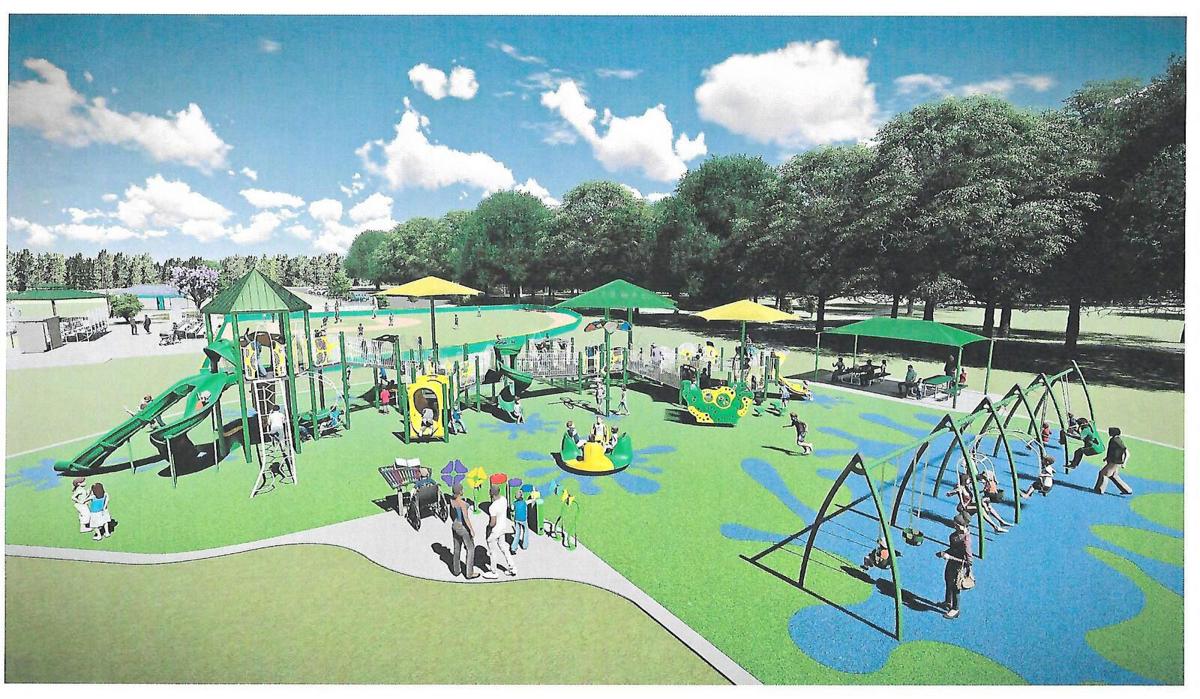 An all-inclusive playground designed by national recreational facilities builders GameTime will be installed behind the Challenger Field in Walker’s Sidney Hutchinson Park. This artist’s concept of what the park will look like when completed shows the playground equipment that can be used by all ages with all abilities.

Mike Cotton, right, director of finances for the City of Walker, points out the location of a fitness area that will be built adjacent to the walking trail in Sidney Hutchinson Park, the city’s principal recreational venue. With Cotton are Kelsey Murray, grants writer for the city, and Mayor Jimmy Watson. Our Lady of the Lake for Livingston Parish partnered with the city to finance construction of the fitness area.

An all-inclusive playground designed by national recreational facilities builders GameTime will be installed behind the Challenger Field in Walker’s Sidney Hutchinson Park. This artist’s concept of what the park will look like when completed shows the playground equipment that can be used by all ages with all abilities.

WALKER — In a continuing initiative to expand and enhance the utilization of Sidney Hutchinson Park, the city’s major recreational venue, plans are in place for the addition of three new attractions that should be completed within the next several months.

Just off the drawing boards are a new playground, a two-stage fitness area adjacent to the popular walking and running track, and a memorial to the city’s emergency technicians, firemen and police officers.

The first of these additions to the park will be the $500,000, all-inclusive playground that will be constructed behind Challenger Field, a baseball field designed for use by those with disabilities. Kelsey Murray, the city’s assistant finance director and grant writer, said the playground "will be a place where all ages with differing abilities will be able to come and enjoy the very latest in playground equipment. Even those restricted to wheelchairs will be able to use this playground equipment. This playground will exceed all Americans With Disabilities Act compliance standards.”

Funds for construction of the playground represent a joint effort between the Louisiana Land and Water Conservation Fund, GameTime, the firm that will construct the facility, and the city. Murray explained that the LWCF contributed $250,000 to the project, GameTime added $138,000 and the city chipped in with $110,000.

Murray said the new playground will be a showplace that should attract visitors from a wide area. “This playground will be one of the finest in the region and will be an award-winning facility. We have learned that it will be recognized as a National Demonstration Site award winner. This expands our ability to provide recreational opportunities for all, regardless of their abilities,” she said.

Walker Mayor Jimmy Watson pointed out that Challenger Field, one of the very few such facilities in Louisiana, already provides a special playing field for those with disabilities. “The initiative to build Challenger Field started when Rick Ramsey was mayor of Walker, and this beautiful facility is the result of contributions from many in the community. The GameTime playground located next to Challenger Field will be yet another addition to our park. We were among the first in the state to build a Challenger Field and this playground will add another facet to our commitment to provide recreational facilities that everyone in the community can enjoy,” the mayor said.

The playground, with a footprint of 98 by 116 square feet, will be constructed on a concrete foundation that will be covered by a rubberized surface that is just one of the safety features in the playground. Play equipment will include swings, a variety of slides, a specially designed merry-go-round, climbing structures, a pavilion with picnic tables and chairs and special activities that can be utilized by those in wheelchairs. The playground area will be accessible from two entrances and Watson said the area will be open for use seven days a week from dawn to dusk.

“We planned for this playground for some time now and I think we visited about 20 facilities like the one we are going to build before we decided on the final layout. We decided to contract with GameTime for total construction of the playground to assure that it will be done properly,” the mayor said. Construction of the playground should start in the near future and Mike Cotton, the city’s director of finances, estimated that it should be completed in the final quarter of this year or early next year.

The second addition to the park will be the fitness area that the city is building in cooperation with Our Lady of the Lake of Livingston Parish. The fitness area, which will also be installed on concrete pads, will include specialized equipment that can be used for exercise repetitions that help to improve physical health. Watson said that the addition of the fitness area is part of Walker’s Healthy Lifestyle Initiative. “Through our Healthy Lifestyle Initiative we are encouraging our citizens to get out and exercise as a way to improve their health. The equipment at the fitness area can especially be used by our senior citizens, many of whom enjoy using our extensive walking trail,” Watson said.

The fitness area, also designed by GameTime, will be located near the new playground. Cotton said Our Lady of the Lake was quick to offer financial support for the project. “We let them know what we wanted to put in the park in the way of exercise equipment and they were happy to help us out with funding for the project. The center will cost about $100,000 and the city will contribute about $30,000 of that total,” he said.

The memorial to those who have served the city will be built near the Safe House, located at the eastern edge of the park, which was completed earlier this year. Watson said that the family of the late Jodie Benton approached the city with the intention of building a memorial to the first responders, police and firemen who have served the city over the years. He said that a committee was then formed to decide how they wanted to design the memorial. The city has already poured a large slab for the memorial and the project awaits final design by the committee. The memorial will include the flags of the nation, state and the City of Walker and a fountain. The memorial will also be connected to the walking trail.

Watson said that providing recreational opportunities to the residents of Walker and the area continues to be one of the city’s commitments. “Sidney Hutchinson Park is a very valuable asset for our city. People come to the park all the time. I see people here walking, jogging, flying kites, picnicking, fishing … they feed the geese and the squirrels, fly drones and walk their dogs. We just completed successful baseball and softball seasons. Because of the virus we had fewer teams, but we did finish the season. We are looking forward to completing the interior of the Safe House and we will eventually have basketball, pickleball and other sports in that building. We just keep on making improvements to the park,” Watson said.

The city maintains eight baseball fields with five of them lighted. Watson said that all the fields were rebuilt this year and new sod is now being laid down where needed.

Watson praised the Walker city Council for its support in seeing that the park is being improved and upgraded on a regular basis. “I couldn’t ask for any more support from the council than what I receive. They have been most cooperative,” the mayor said.