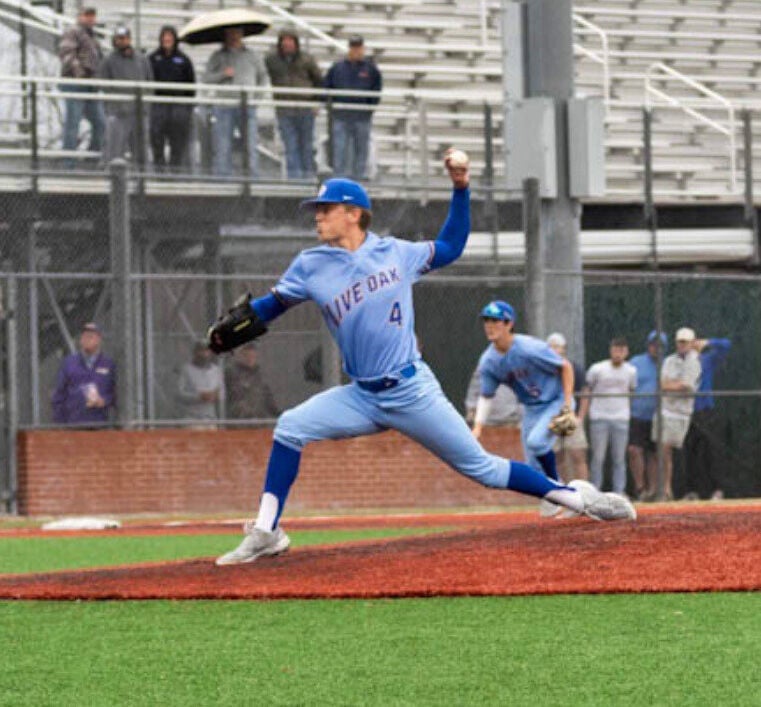 Ethan Prescott stretches for a pitch. 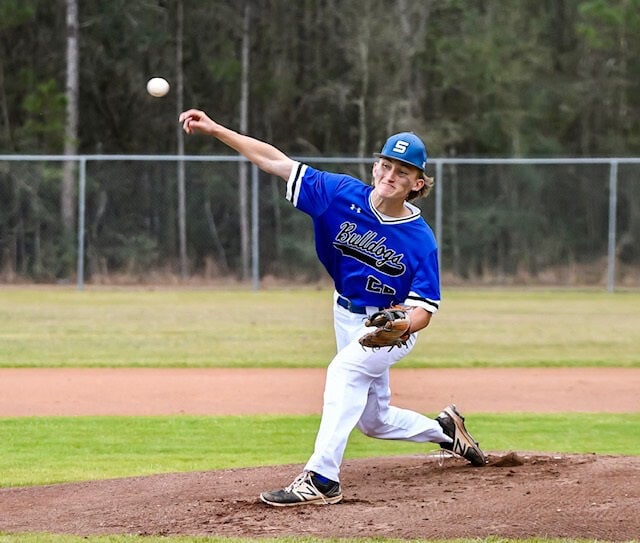 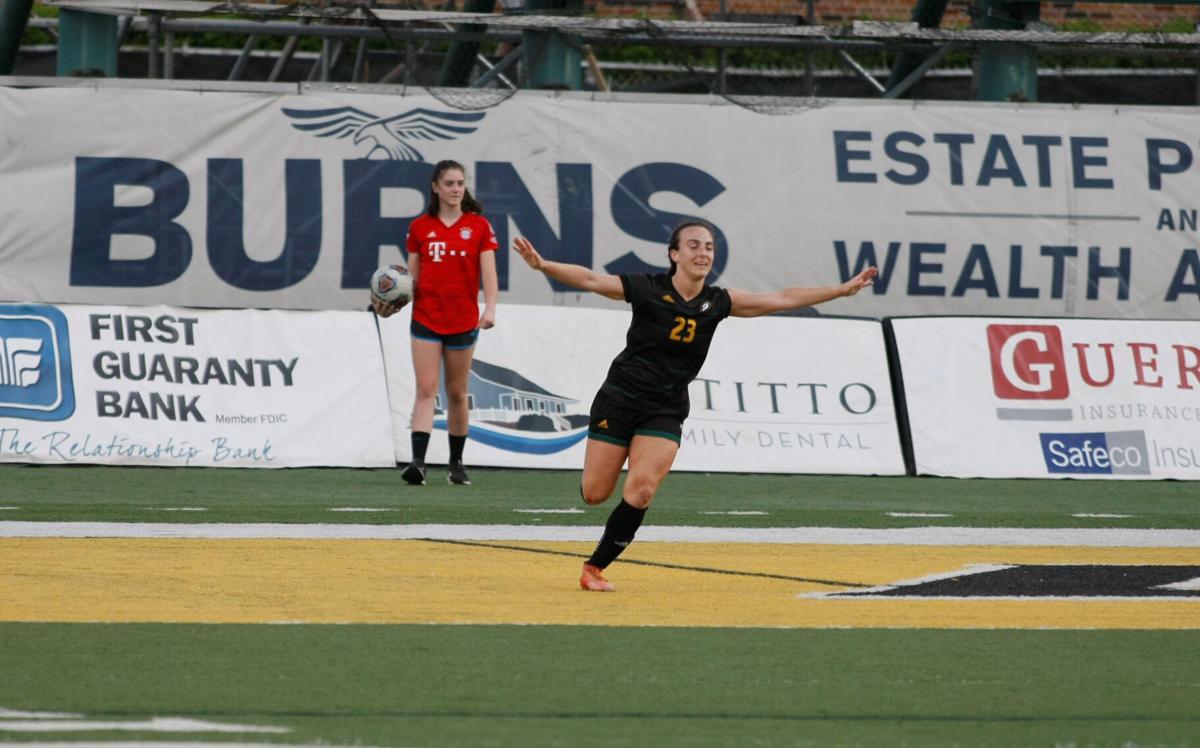 Southeastern's Mackenzie Maher goes after the ball during a recent game. 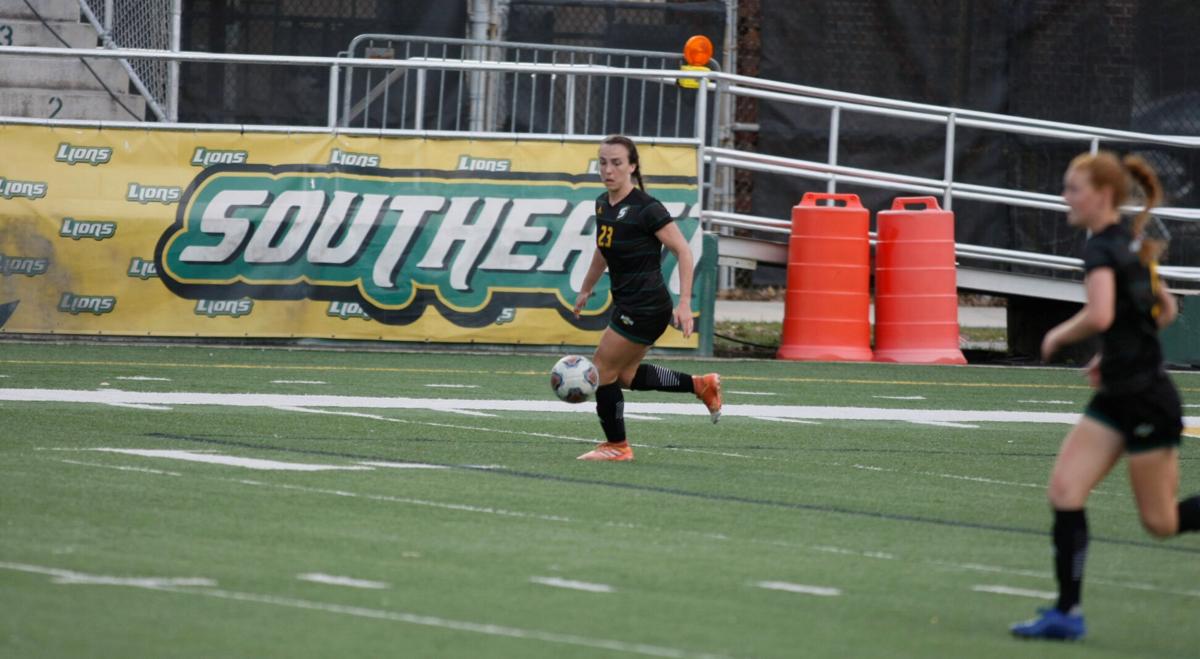 Ethan Prescott stretches for a pitch.

Southeastern's Mackenzie Maher goes after the ball during a recent game.

One of the reasons the Live Oak High School baseball team has been on a tear this season is its pitching depth.

You know things are going well when you ask a reliever to start a key district game, and he responds with a dominant performance.

That’s just what happened on April 8, when Live Oak coach Jesse Cassard got a complete-game, three-hit shutout from senior left-hander Ethan Prescott in an 8-0 win over District 4-5A rival Walker.

A Baton Rouge Community College signee, Prescott has been a jack-of-all-trades for the Eagles this season. With an overall record of 5-1 and two saves, he has given Live Oak quality innings almost every time he has stepped onto the mound.

“Give him credit,” Cassard said. “We’ve started him, we’ve had him in middle relief, we’ve had him closing — he’s had a bunch of roles this year. We’ve bounced him around, and it was time to give him a game. Man, he was unbelievable (against Walker).”

Prescott’s performance helped keep Live Oak undefeated as it headed into its final district challenge, a home-and-home series with Central that will serve as the Eagles last tuneup games before the playoffs begin.

“In the past, I’ve mainly been a starter,” Prescott said. “This year, being a senior, they trust me a lot in different situations.

“There was one game (against Gulfport High in February) where a guy came in and struggled. It was a 1-0 ballgame, they brought me in and I went out and got three up and three down in back-to-back innings. Then I did that (again) two days later, and I kind of got on a roll after that. Whenever a game got tight, I would come in.”

There’s no telling how or when Prescott will be needed in the playoffs, but it’s a good bet that he will be ready.

Former Denham Springs High soccer standout Makenzie Maher is playing her first season for Southeastern, and she has already made waves. Prior to the recent Southland Conference Tournament, Maher was named as the conference’s top newcomer, a distinction she earned as a sophomore transfer from LSU.

A forward, Maher was also picked as a second-team member of the all-conference team. Maher scored five goals in five different matches, and led the Lions with 17 shots on goal, a mark good enough for fifth in the SLC.

Playing a conference-only regular season, SLU went 6-2-3 and was the fifth seed at the conference tournament. Maher scored five goals in five different matches, and led the Lions with 17 shots on goal, a mark good enough for fifth in the SLC.

"Makenzie was another player who was very eager to get started this year," SLU coach Chris McBride said in a news release. "She's been craving feedback all year on her performances and worked very hard on her game. Her aggressiveness and work rate have helped our whole team create some attacking opportunities this year."

Maher was one of the key players as SLU (8-2-4) earned a no. 5 seeding for the Southland Conference tournament, where the Lions rolled to the championship. SLU opens play in the 48-team NCAA championship tournament this week against Rutgers.

Maher finished her career at Denham Springs in 2018, and was a three-time Division I, All-District 4 selection, including offensive Most Valuable Player in 2016 and 2018.

As high school baseball’s regular season winds down this week, sophomore right-hander Jayden Teague has continued to give Springfield impressive, reliable performances. Earlier in the season, he strung together back-to-back no-hit outings, a run that spanned 10 consecutive innings.

This time, Teague was perfect in Springfield’s 11-0, five-inning win over French Settlement. Including five strikeouts, he retired all 15 batters he faced, and helped himself on offense with an RBI double.

Midway through their District 10-2A schedule, the Bulldogs were 18-7 overall and 3-1 in district. They were sixth in the LHSAA’s unofficial power ratings on April 19, and should be among the favorites when the Class 2A playoffs begin next week.