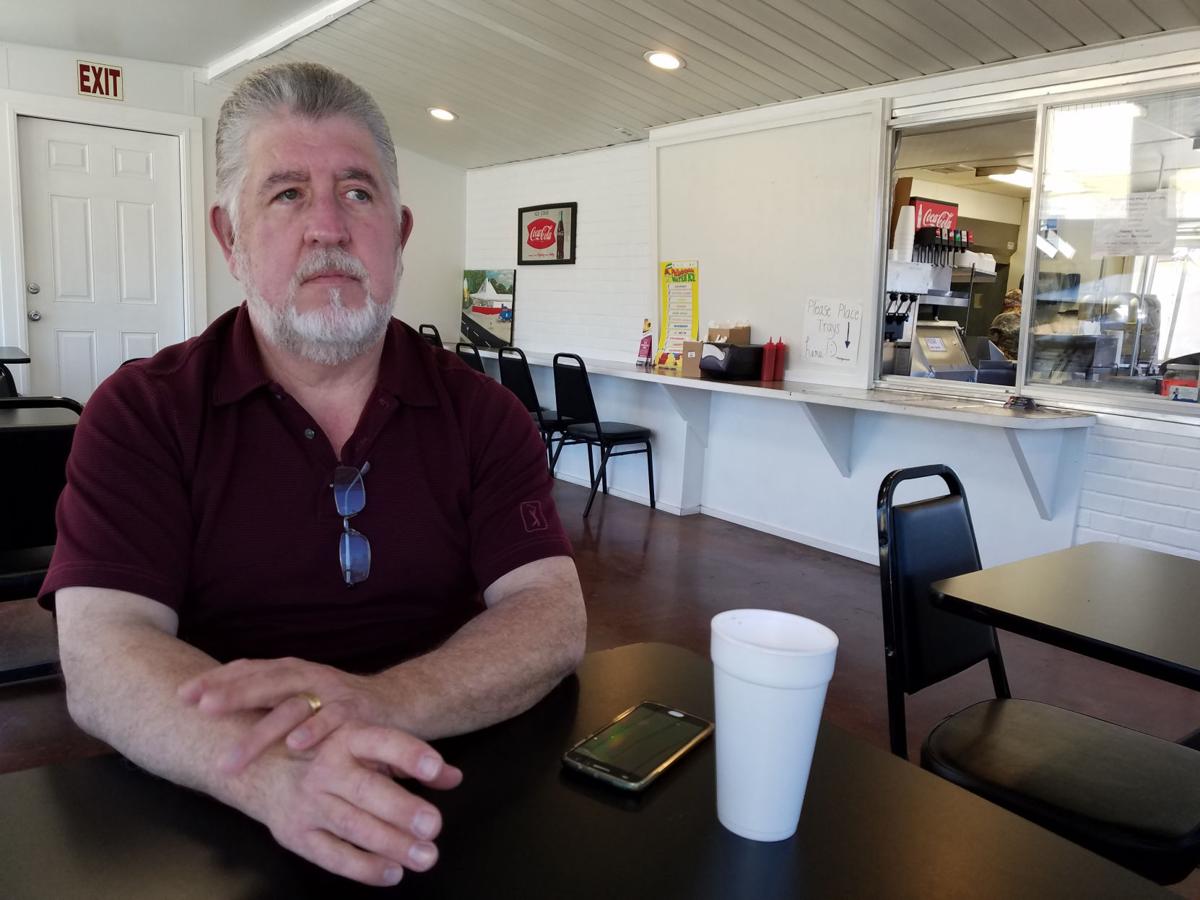 Owner Jeff Cutrer enjoys eating in his own place, the Snow Top, several times a week and often sits down with customers. His hair gives a new meaning to the restaurant’s name. 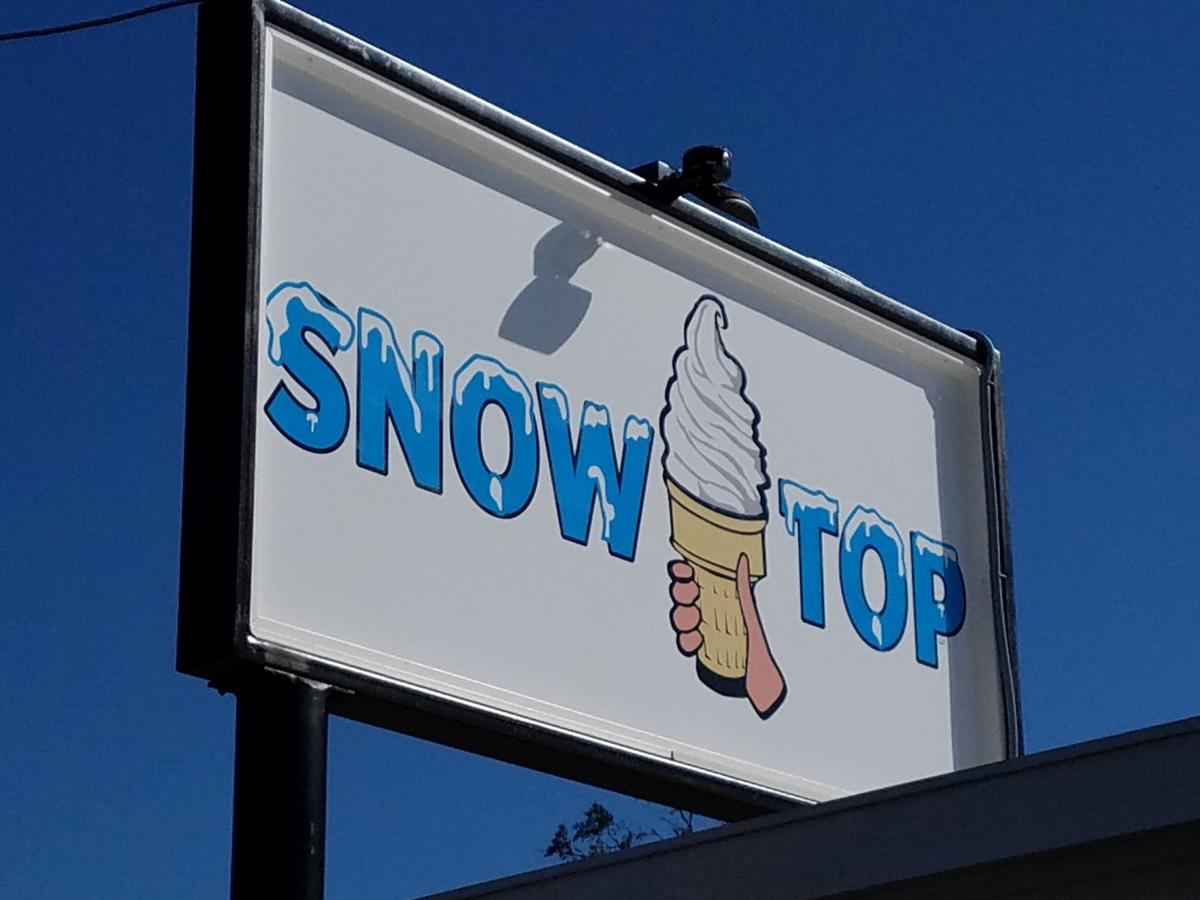 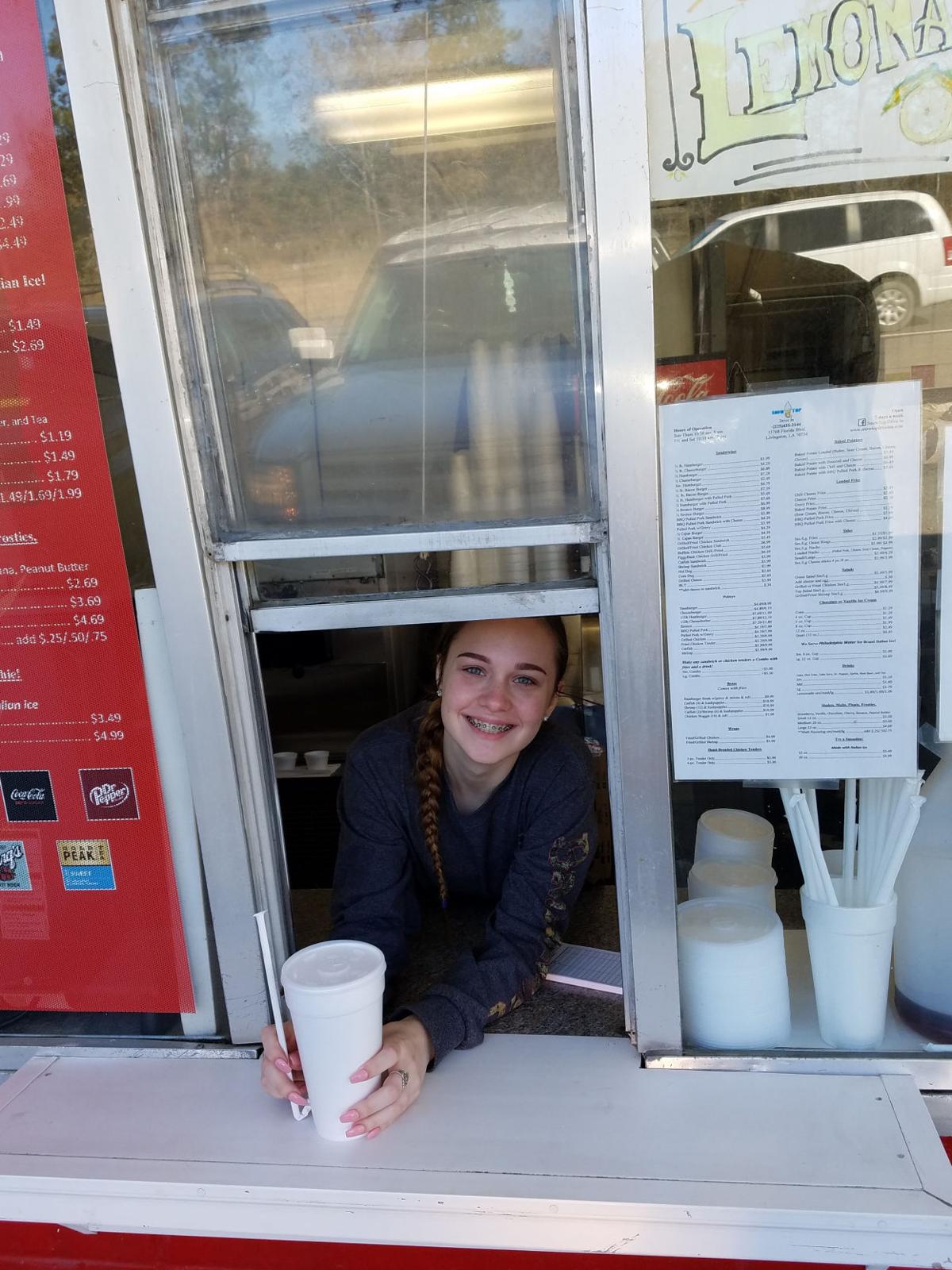 Kaitlyn Bagents is just one of the many smiling faces that greet customers at the walk-up window at the Snow Top. 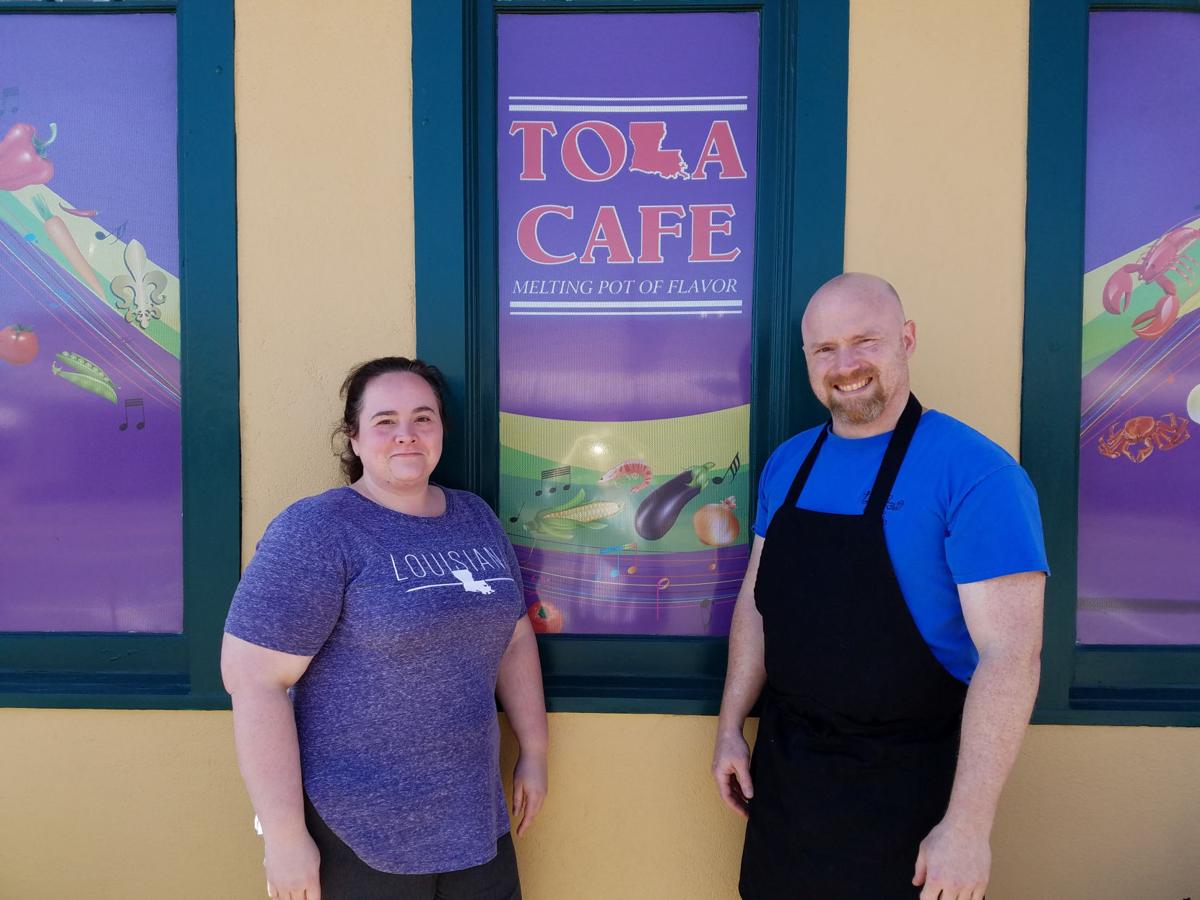 Owners/chefs Amber and Cary Dugas welcoming customers outside with their TOLA Café sign. 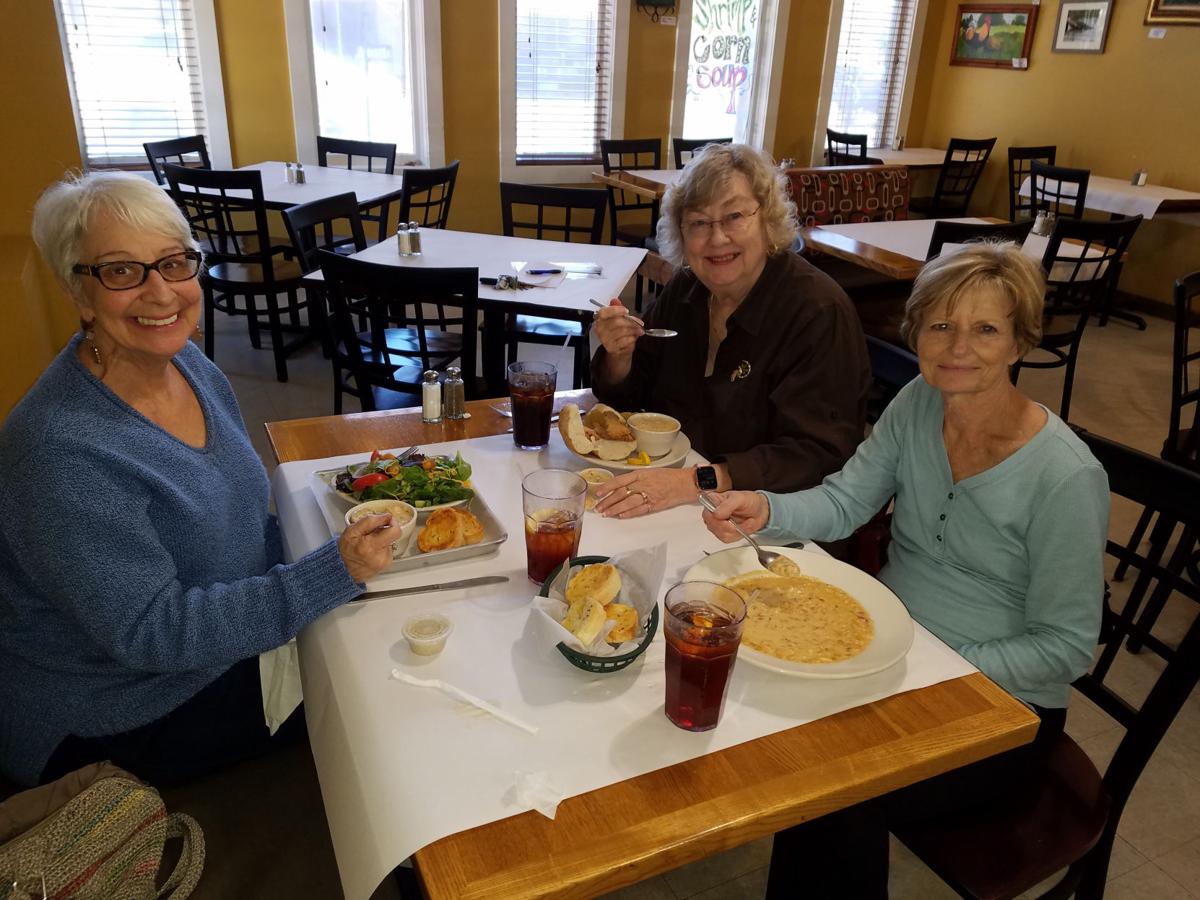 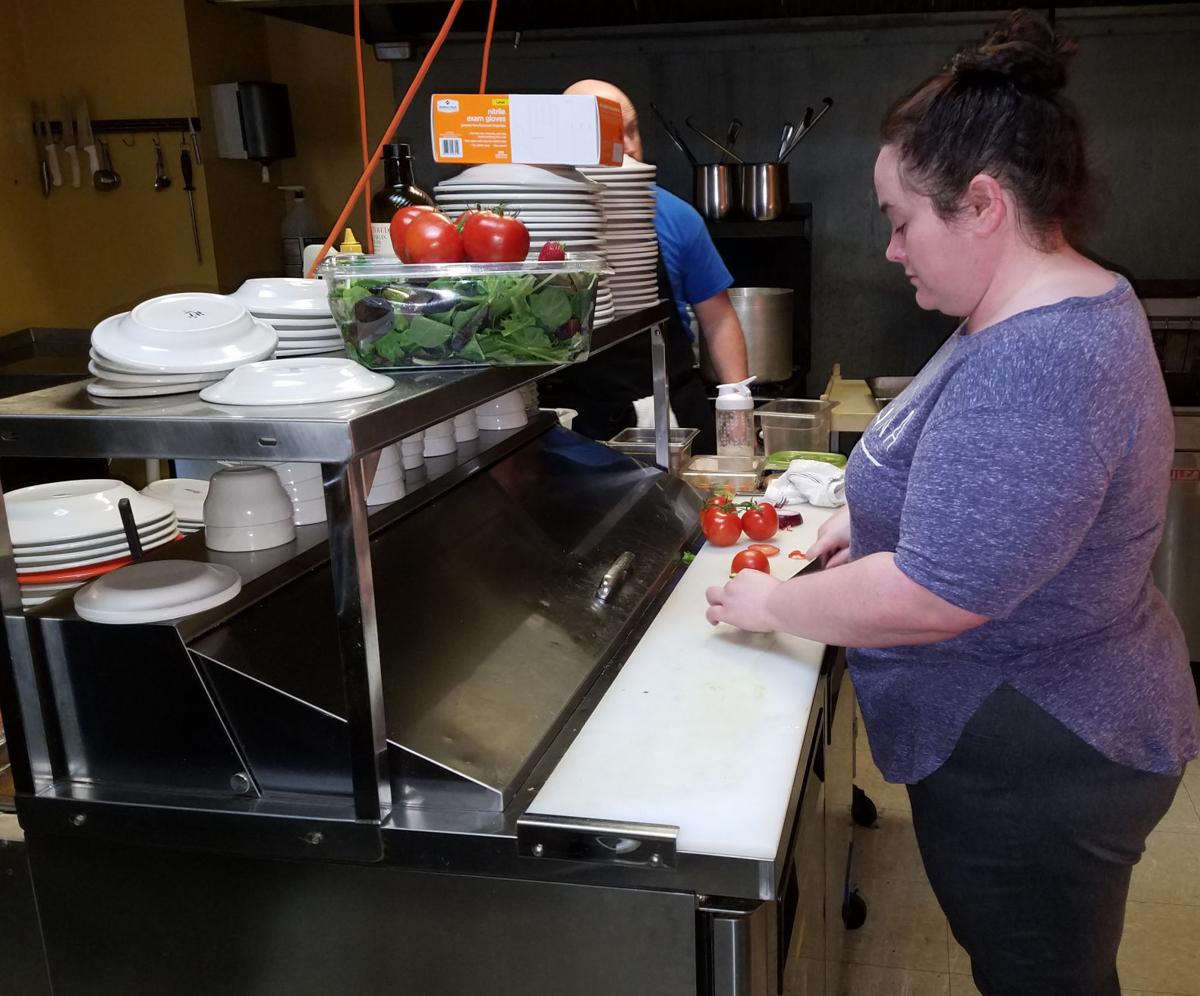 The owners of TOLA Café are busy prepping for lunch in the kitchen. Amber and Cary Dugas 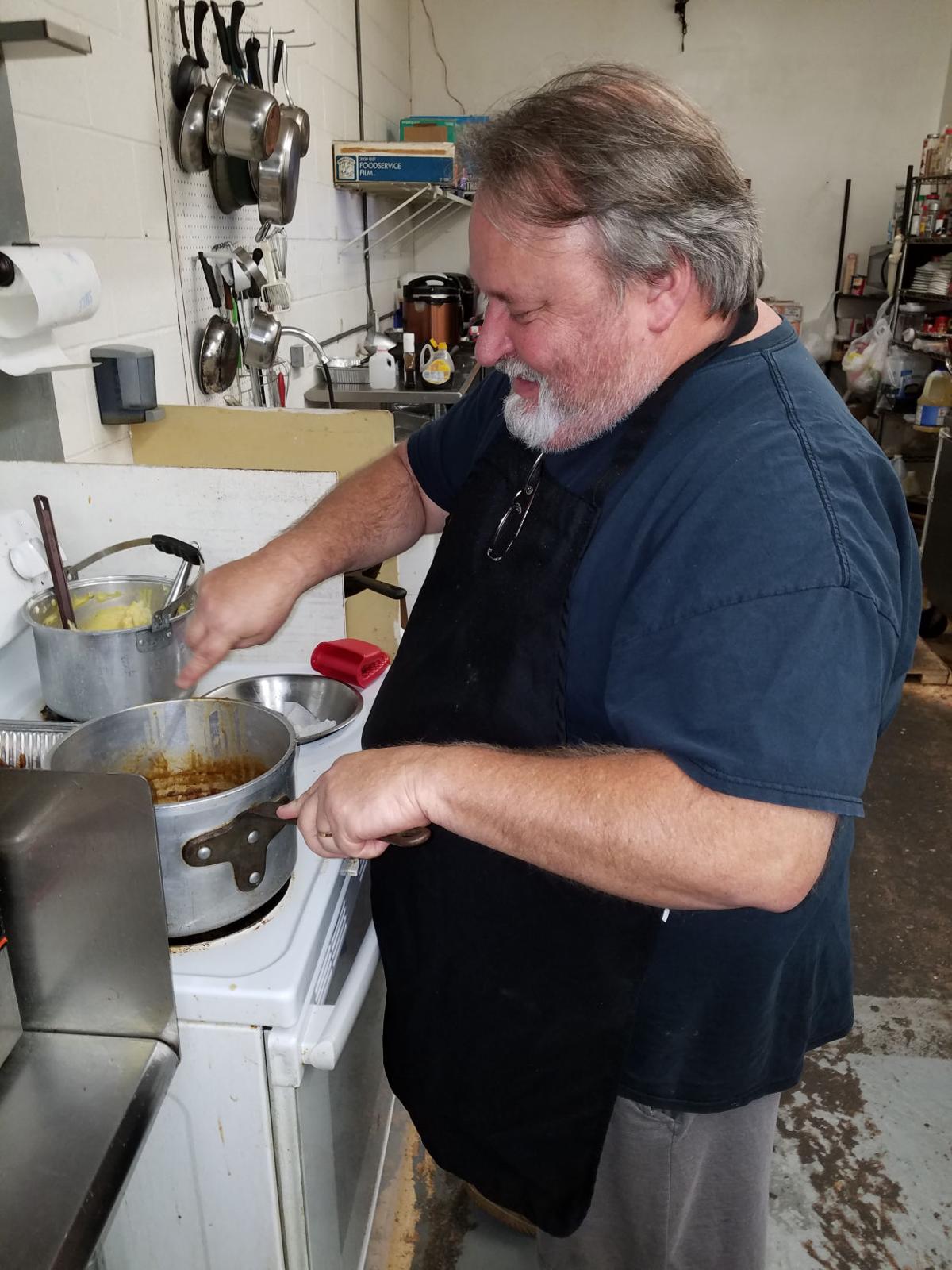 Café Pedigo’s co-owner, chef and jack-of-all-trades, Donald Pedigo can always be found hard at work over a hot stove. 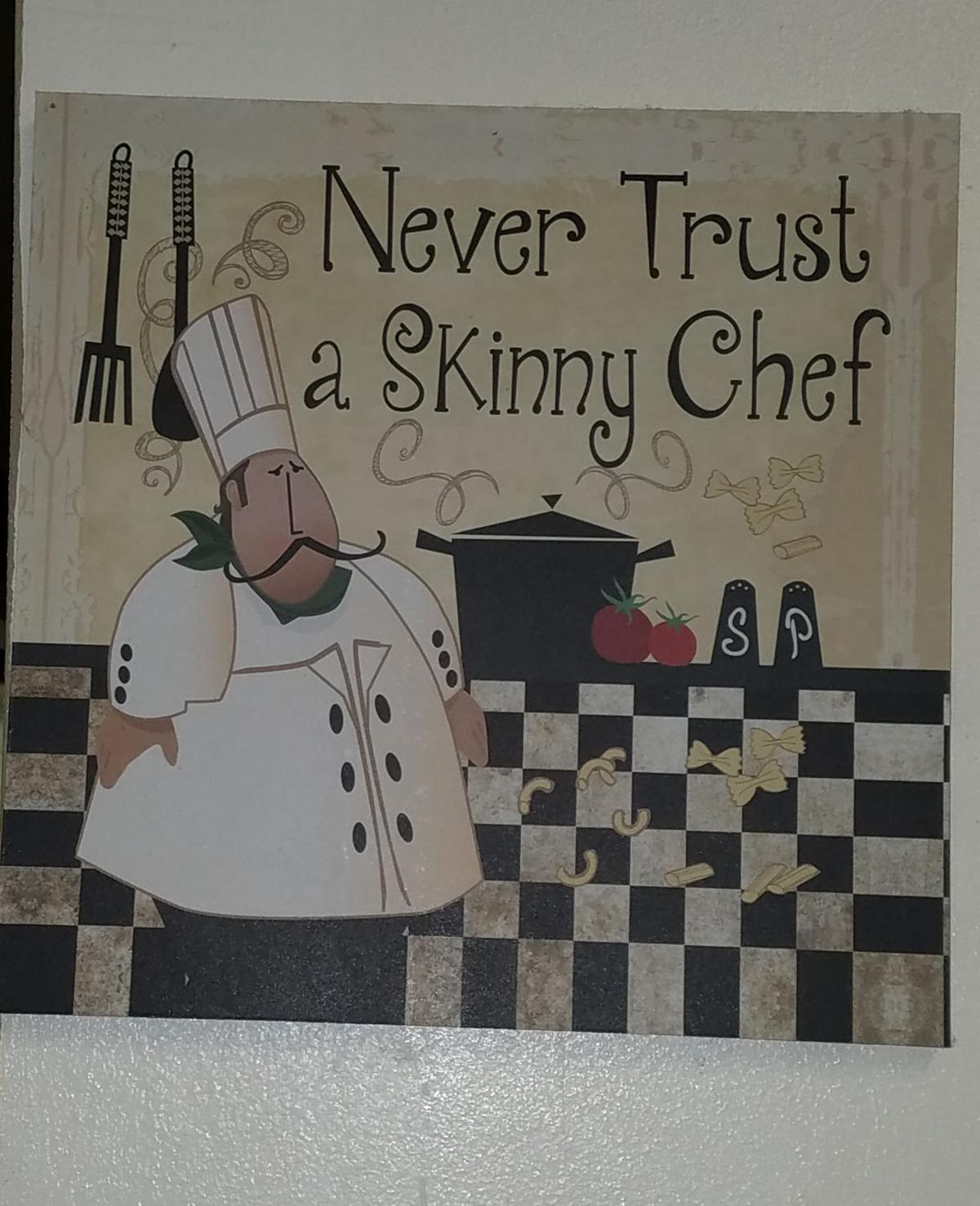 Chef Donald Pedigo lives by this sign’s motto, he said. 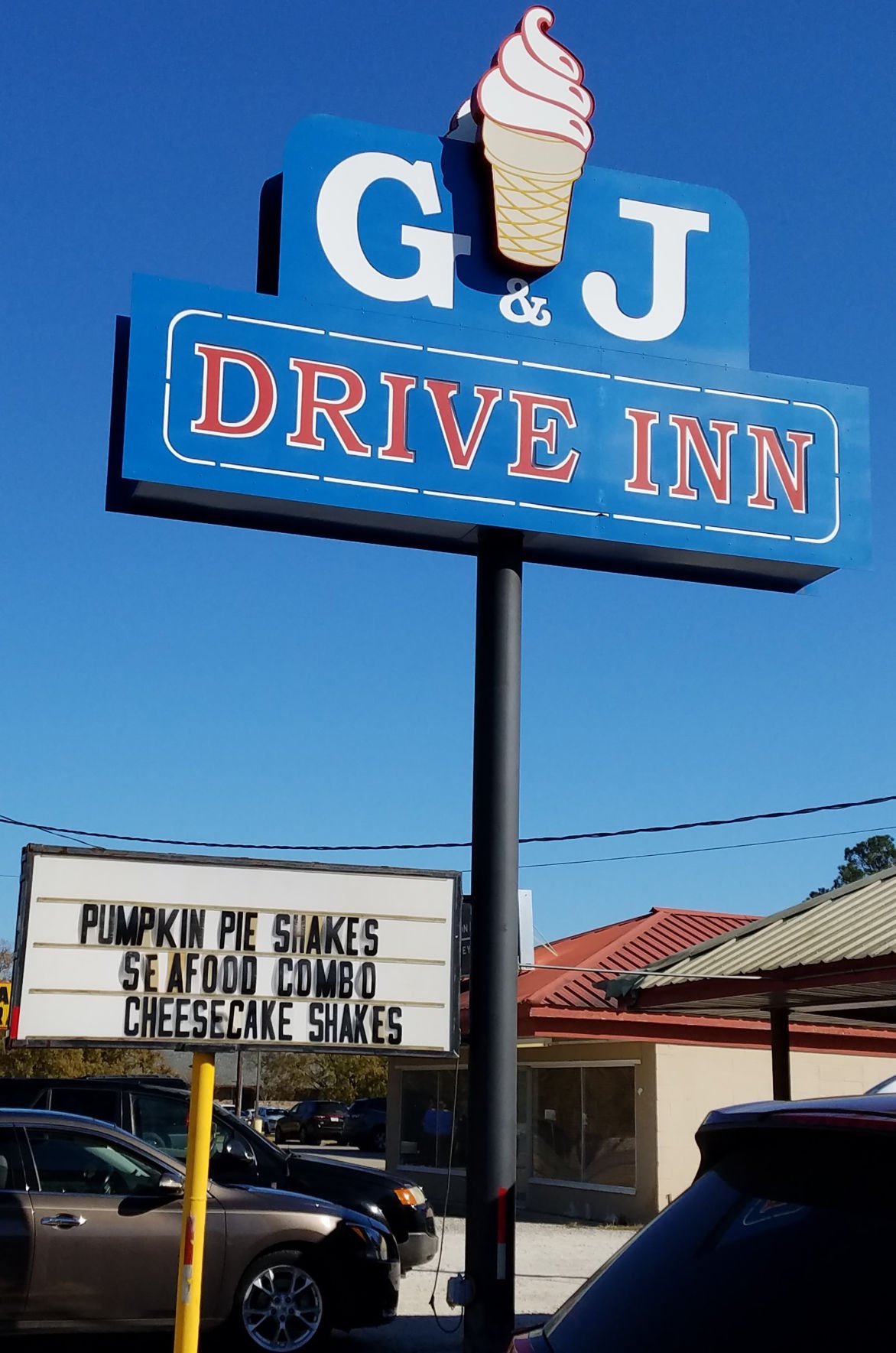 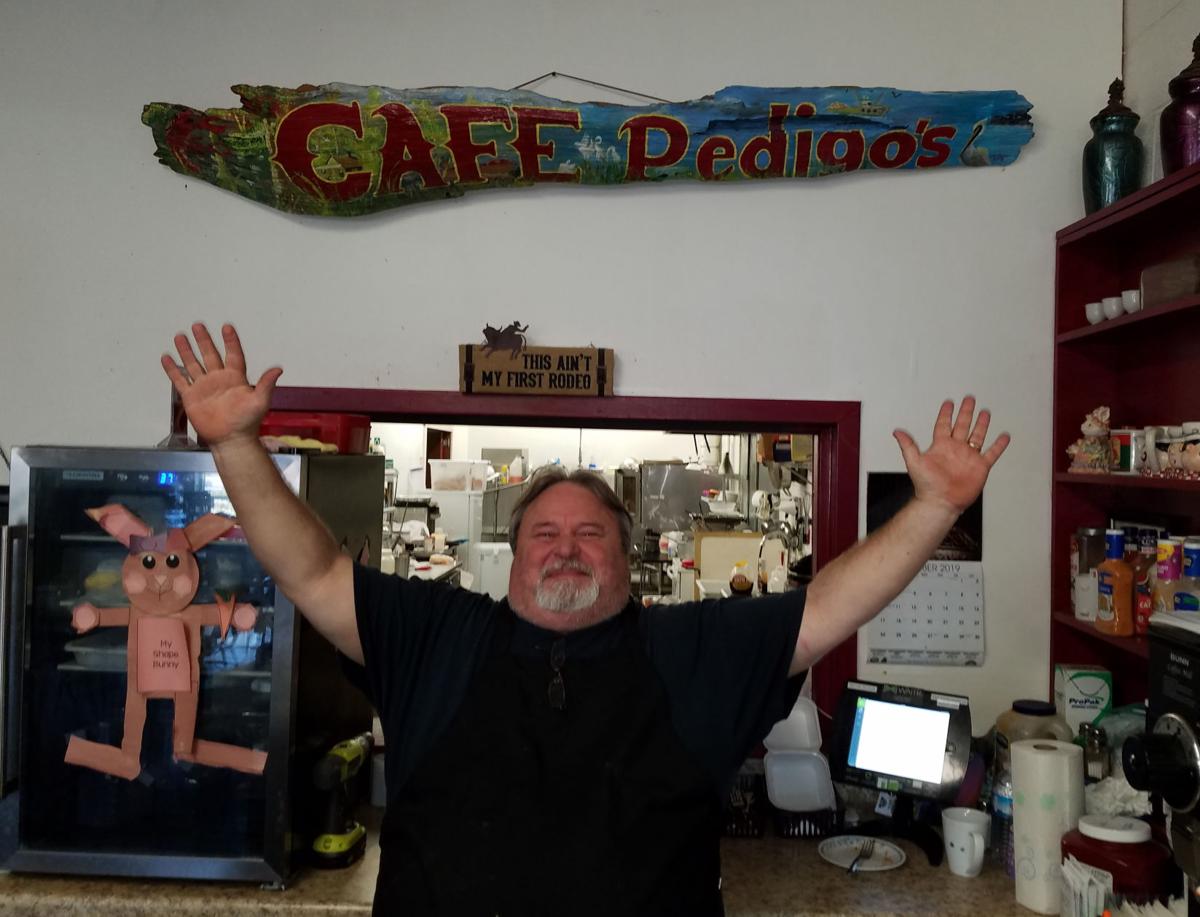 Everything in Café Pedigo’s is worth celebrating said the chef, including this large driftwood log restaurant sign. 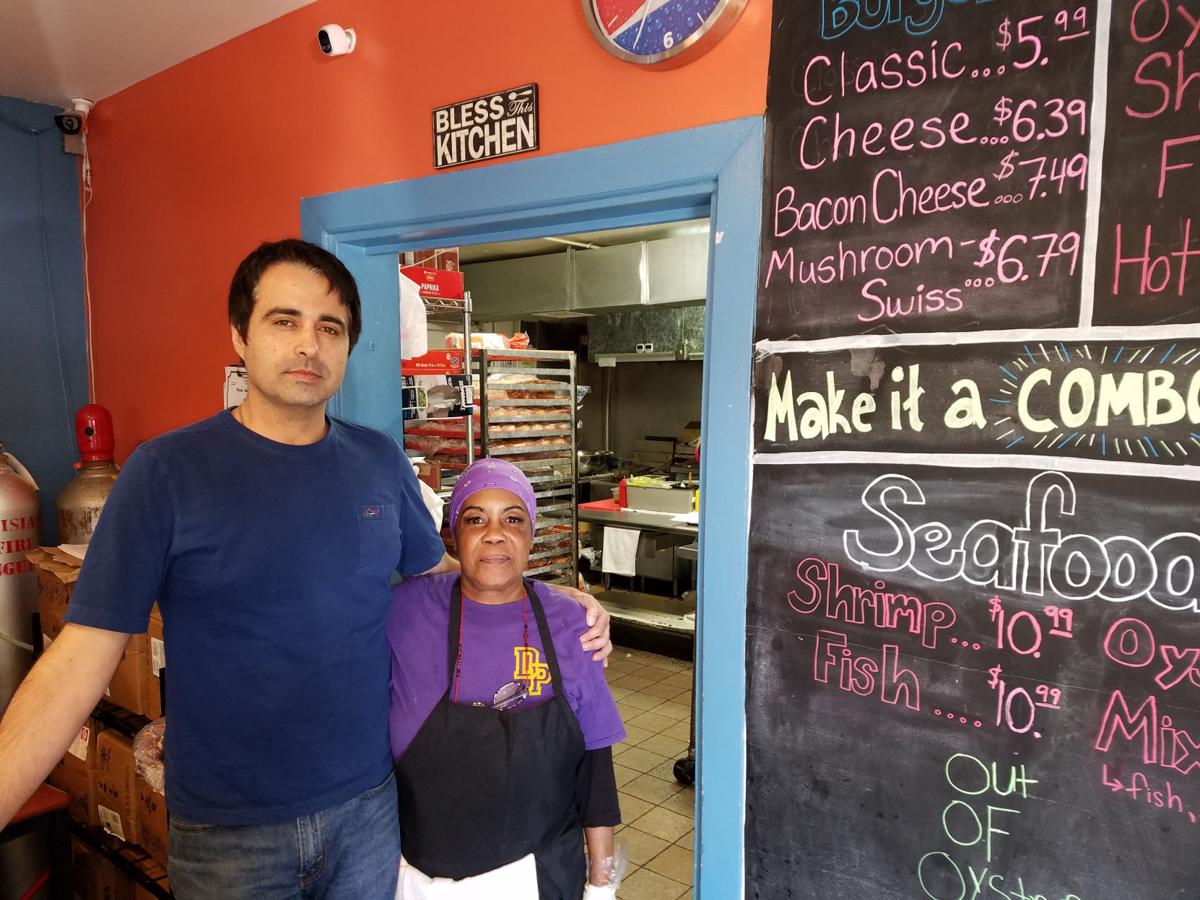 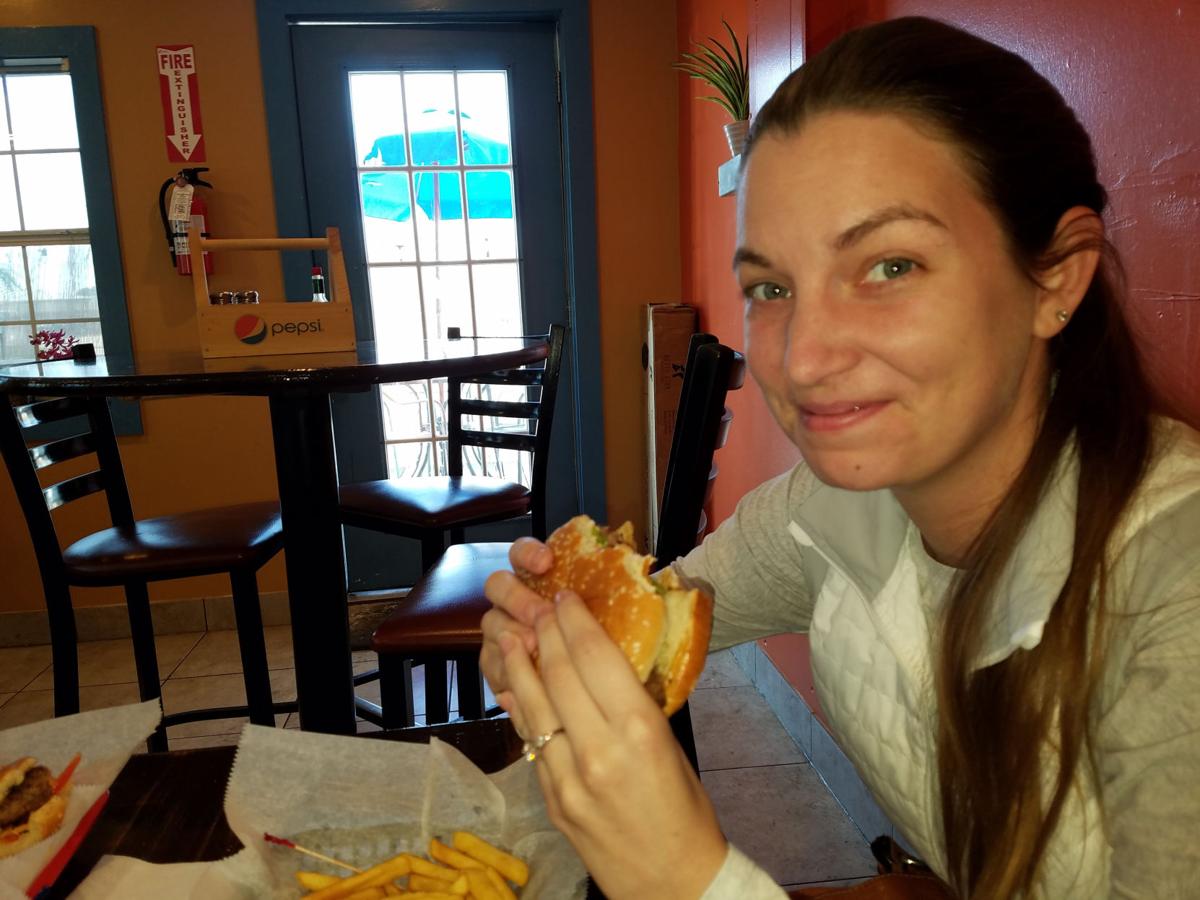 The old Denham Patty restaurant is easy to see by regulars driving by on Florida Boulevard, and Angie Hebert is glad she did after taking a bite of her huge classic burger.

Owner Jeff Cutrer enjoys eating in his own place, the Snow Top, several times a week and often sits down with customers. His hair gives a new meaning to the restaurant’s name.

Kaitlyn Bagents is just one of the many smiling faces that greet customers at the walk-up window at the Snow Top.

Owners/chefs Amber and Cary Dugas welcoming customers outside with their TOLA Café sign.

The owners of TOLA Café are busy prepping for lunch in the kitchen. Amber and Cary Dugas

Café Pedigo’s co-owner, chef and jack-of-all-trades, Donald Pedigo can always be found hard at work over a hot stove.

Chef Donald Pedigo lives by this sign’s motto, he said.

Everything in Café Pedigo’s is worth celebrating said the chef, including this large driftwood log restaurant sign.

The old Denham Patty restaurant is easy to see by regulars driving by on Florida Boulevard, and Angie Hebert is glad she did after taking a bite of her huge classic burger.

The scent of seared beef wafts through the air when you open Café Pedigo’s front door, and you can almost taste the sizzling beef before you sit down. The restaurant is just one example of the locally-owned places that are still cooking up down-home food in Livingston Parish.

Knickknacks and signs decorate the room, which has a casual dress code but upscale food at affordable rates. The narrow space once served as an archery range, and foam animals were traded in for fresh meat.

Café Pedigo's is known for its cooked-to-order steaks. Co-owners and cooks both stand by their cuts of beef. “I’d put my steak against any in the area,” said chef Donald Pedigo, who is in business with his wife, Inell Pedigo. "It’s cooked to order, fresh cut and priced in an affordable range," he said. “People drive over here from out of the parish because they remember how my dad cooked at the original Pedigo’s in Baton Rouge and elsewhere.”

His father’s marinade is still used when cooking beef, and there’s a family beef rubdown — both of which Donald Pedigo keeps a tight family secret. His dad, Don, would have wanted to keep it that way. And after changing names and locations a few times in Baton Rouge and Denham Springs, Ronald took over the restaurant in 1993.

His brother, Ron, helped run the restaurants along the way, too.

The menu includes an array of selections all cooked with marinade, seasonings, secret spices and lots of love and butter. Steaks range from an 8-ounce steak or a 16-ounce ribeye to a 24-ounce prime rib — all served with a baked potato, toast and a salad. There also are appetizers, hamburgers, sandwiches and desserts (try the banana pudding) on the menu, along with a kid’s menu. And in crawfish season, the platters are loaded down with mudbugs.

“I just want to make people feel at home here,” Donald said. “It’s not a dress fancy kind of place. I just want my diners to feel relaxed in a family atmosphere where good local food at an average price folks can afford.”

Located at 13093 Burgess Ave. in Walker,  the café is open for lunch and dinner Monday through Saturday.

Across the way in Denham Springs, the dining room at TOLA Café is filled with the most enticing scents of Louisiana shrimp, sweet corn and a blend of seasonings. TOLA (Taste of Louisiana) Café is in the downtown antique district. The swamp fries’ gravy with cheese is boiling and the hurricane fries with the signature debris roast beef is whirling in jalapeños and cheese. And these are just the menu starters. Folks get there early to get a good table.

It’s difficult to speak with your mouth full, but customers leave room for a “hello” for owners and chefs Cary Dugas and his wife, Amber — and also for Amber’s mom, Kim Hampton. Fairly often, staff members welcome three regulars who lunch there following greeting card classes nearby. Over a large, piping hot bowl of sweet corn and shrimp soup — a standout menu item, one customer said, “Oh, this looks so good. But all their food is good.” Another lady opted for a cup of soup with another café item — half of a roast beef po-boy.

Whether you pick up your food, have it delivered or belly up to a table, the menu is varied and impressive. But it’s affordable, too, Amber Dugas said, with lunch running $15 for the average per person. “That fresh and creamy shrimp and corn soup is one of the things we are known for," she said. “Our shrimp and the roast beef po-boys are popular, too. For the latter, a 20-pound roast is used every day, and the juice is the basis of the gravy. I would have not imagined it, but it’s growing so much. Customers become family. I mean, I’ve been to many customers’ baby showers, weddings and other events, and I cherish that. This has become a community meeting place for some people.”

At 105 North Range Ave. in Denham Springs, TOLA is open for lunch Tuesday through Saturday and for dinner on Friday and Saturday.

If you're new to the area, one of the first things you do is ask neighbors and those you meet about great places to eat. They will always have a local restaurant to recommend, and in Walker, Bubba’s Grill and Catering will probably be mentioned a few times. In the afternoon, the staff busily prepares for the dinner rush. Manager Joshua Manuel is up to the task, ensuring the place keeps running smoothly as it has since 1998.

Restaurant owners Leila Strickland and Joey Schillage have the place hopping with down-home, Louisiana food. “Our popular items include the burgers and steaks, twice-baked potatoes. In fact, a regular, Ms. Brenda, will come in three times a week just to eat our pot roast beef po-boy,” Manuel said.

Bubba’s is located in Walker at 31755 Walker Road N. An average lunch runs about $13, but seafood plates and steaks might be a bit pricier at dinner.

If you’d rather roll up your sleeves and have a more casual experience, by drive-up or inside, step back into 1950s-style drive-in Snow Top in Walker. The owner, Jeff Cutrer, enjoys eating his own good food and talking with friends in the small dining room. Going to the window to order outside is like a step out of time, but there’s always someone with a big smile to fill your ice cream or milkshake order.

And even though most folks come for the ice cream, milkshakes and Italian ice in various flavors, they stay for the burgers, sandwiches and po-boys (from pulled pork with gravy and fried chicken tenders to catfish and shrimp).

“Our hamburgers are by far are the biggest sellers,” said Cutrer. “We have a great burger. The best around. Everyone uses Angus beef, but I prefer the Hereford. We don’t add any spices, just cook a good burger. The chicken is hand cut, battered and fried on-site, too.”

Cutrer said his shakes can be made as malteds with real malt flavor.

A retired purchasing agent, Cutrer said he got tired of the commute and traffic. “I continue to dedicate my entire life to this place,” which he took over about nine years ago, he said.

Nearby is another Cutrer — Jeff Cutrer's brother Dennis Cutrer, a pharmacist who owns the G&J Drive Inn. It is also is a family-friendly and family-run casual diner upholding the family values of a small-town atmosphere.

To take a taste at both places and determine which is best, visit Snow Top at 13768 Florida Boulevard or G&J Drive Inn right next door. Both are open for lunch and dinner just about every day.

Back in Denham Springs, the staff at The Denham Patty is busy taking walk-in orders to go and seating folks for service as fast as they can. They are known for their large hamburgers. There’s the classic burger, the bacon cheeseburger, the mushroom swiss burger as well as the jalapeño cheeseburger. If that’s not enough, order up the junior hamburger, the hamburger po-boy, the patty melt or the grilled-onion-covered patty steak plate with gravy.

About every flavor of po-boy, from shrimp to oyster and then some, is available on the menu, along with deli sandwiches, homemade chicken tenders, seafood plates and salads. Business is doing well, as an employee in the kitchen, Linda Miles, just has a moment to wave hello, while partner Amir Esna plays the cash register like it’s a piano. They both greet people by name, especially those running in for a pickup order.

In the meantime, one of the classic burgers is making its way, winding between chairs and tables, to the table of Kelsey Dempster, who just moved to the area but was persuaded to eat here by a friend. When the food arrives, her eyes get as big as saucers as she exclaims, ”Wow! That’s really a big burger.”

Along with co-owner Mitra Khalli, Esna and staff have kept the place running literally through “hell and high water.” During the 2016 flood, people had lost everything and didn’t have anywhere to go. The Denham Patty was open, though, feeding locals and regulars alike — whether they could pay at time or not.

“People already knew we had quality, nonprocessed food," Esna said, “We know them, and they give us respect back. We are a community now.” Open every day but Sunday, take time to visit The Denham Patty at 243 Florida Ave. S.E.