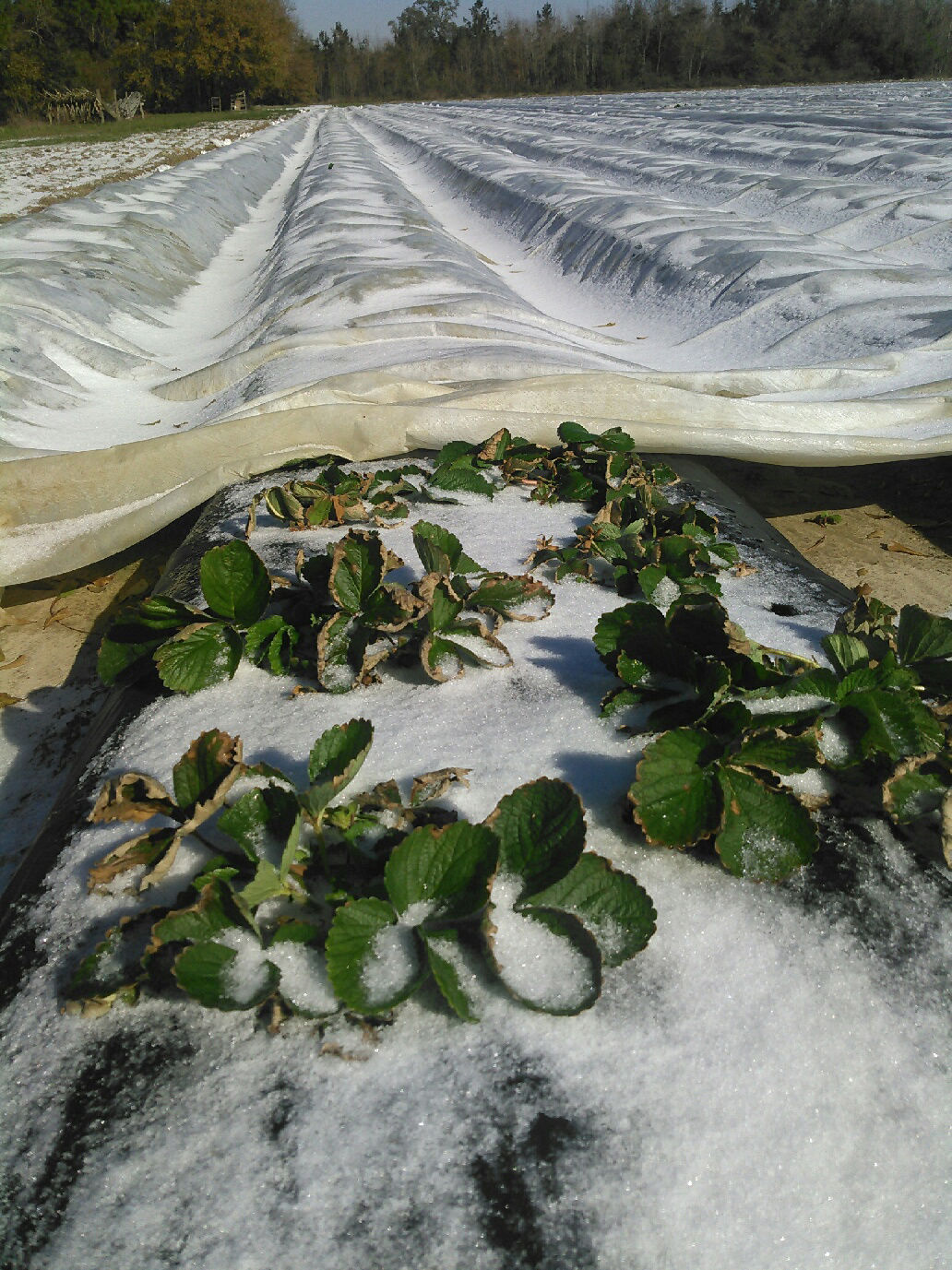 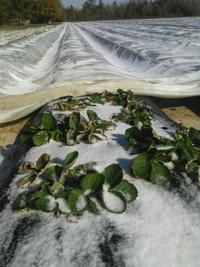 A few strawberries poke out from beneath a large white cover that William Fletcher uses to protect his Ponchatoula field during a severe cold snap this week. 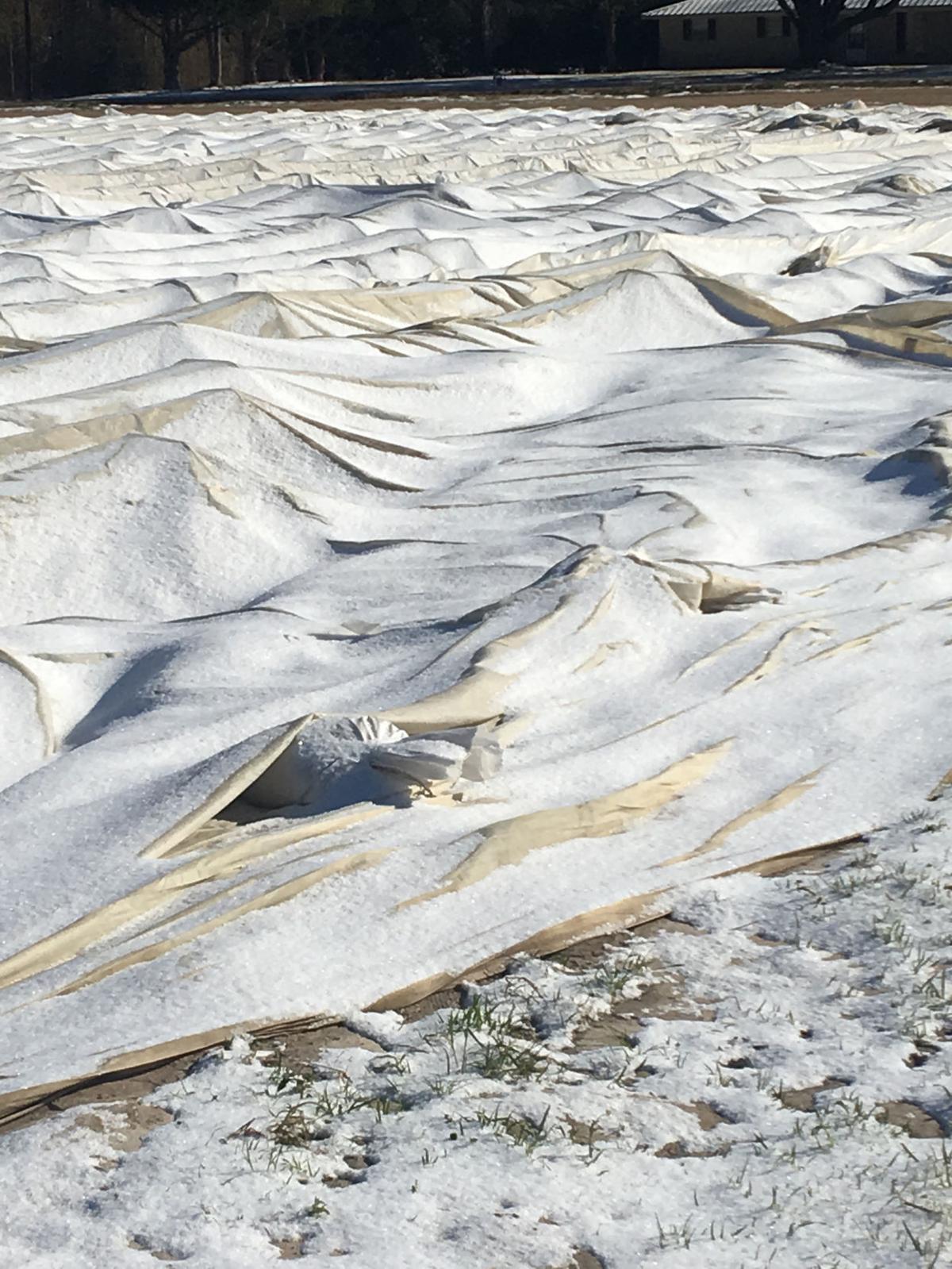 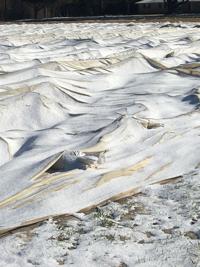 The fields at Baglio Farms in Independence are covered in two layers of cloth used to protect strawberry plants from freezing during the cold snap. Farmers fear the cold could damage the young strawberry fruits and blossoms on their plants, setting back the early berry season.

A few strawberries poke out from beneath a large white cover that William Fletcher uses to protect his Ponchatoula field during a severe cold snap this week.

The fields at Baglio Farms in Independence are covered in two layers of cloth used to protect strawberry plants from freezing during the cold snap. Farmers fear the cold could damage the young strawberry fruits and blossoms on their plants, setting back the early berry season.

In a race to save their crops, many of Louisiana's strawberry farmers rushed to drape cloths over their fields, hoping the fabric will work with the natural insulation of the snow and ice to help the tender plants survive the freeze.

Temperatures dropped to 14 degrees Tuesday night in Tangipahoa Parish, Louisiana's strawberry capital, in a threat to the early crop of berries that can bring premium prices for the region's farmers.

While the bushes usually survive the cold, freezing conditions can ruin berries already growing on the plants and kill the blossoms that will produce fruit later in the season.

"They're definitely trying to make sure they're doing everything they can and hoping for the best," Whitney Wallace, a county agent with the LSU AgCenter in Tangipahoa Parish, said of the farmers.

Wallace said the cold temperatures could delay production up to three weeks, the time it takes for berries to mature. And that's even without more cold weather that could set strawberry production back further.

In 2016, some 73 farmers planted 369 acres of strawberries for a total value of $17 million, according to a year-end summary from the LSU AgCenter. Farmers in Tangipahoa Parish produced the vast majority of those berries with 290 acres, and most of the fruit was sold commercially.

The strawberries sold this time of year — from November through January — are often the most profitable for farmers, Wallace said. Some farmers use the early season as a way to spread out their income over a longer period, she said.

"Peak season is March and April, but farmers are going to receive more money for their crop earlier in the season," Wallace said.

The cold weather also adds costs for the farmers, who have to hire staff to help them lay giant covers over their fields, she said.

Anthony Baglio, of Baglio Farms in Independence, had placed two cloths on wire hoops over his fields in anticipation of the cold weather. He is hoping the snow and ice that fell Tuesday night will provide an extra coating of insulation to protect his crop.

But he won't know how bad the damage is on his 3.5 acres until he checks under the blankets on Friday or Saturday. Anytime before that, he risks letting out some of the warm air.

"You don't want to disturb it. That helps out when it gets cold in the morning," he said.

Baglio said he is expecting the freeze will set back his season, but he does not think it will be catastrophic.

"We might lose some, but I don't think we’re gonna lose them all," he said.

Early season berries are a small part of his operation, but they usually help him pay the cost of hiring people to cover his fields, he said.

Dale Carona, who farms 12 acres of strawberry fields at Carona Farms in Independence, said the cold has affected his production even before now. This year, the season started well with plentiful berries in November, but the cold weather has since slowed the picking, he said.

"We haven't had a lot of damage, but its been real slow because of the cold temperatures," said Carona, who counts on harvesting about 20 percent of his crop in the early season.

The nasty winter comes as some strawberry farmers are recovering from the the floods of 2016.

William Fletcher, of Fletcher Farm in Ponchatoula, said he was hard hit when the March 2016 flood ruined his crop and left weeds behind in his soil. But then things got worse when the August 2016 flood "washed big channels" through his fields.

Since then, he has been working to rehabilitate his soil, including by planting a cover crop through hurricane season.

His misfortune in 2016 may inadvertently be helping him this year. Because of the cover crop, Fletcher decided to forgo planting early and catching the winter berry season. That means most of his plants are still bare of flowers and fruit that are vulnerable to the cold.

INDEPENDENCE -- Strawberry lovers will have to wait a couple more weeks until they see the locally-grown version piling up at the supermarket,…