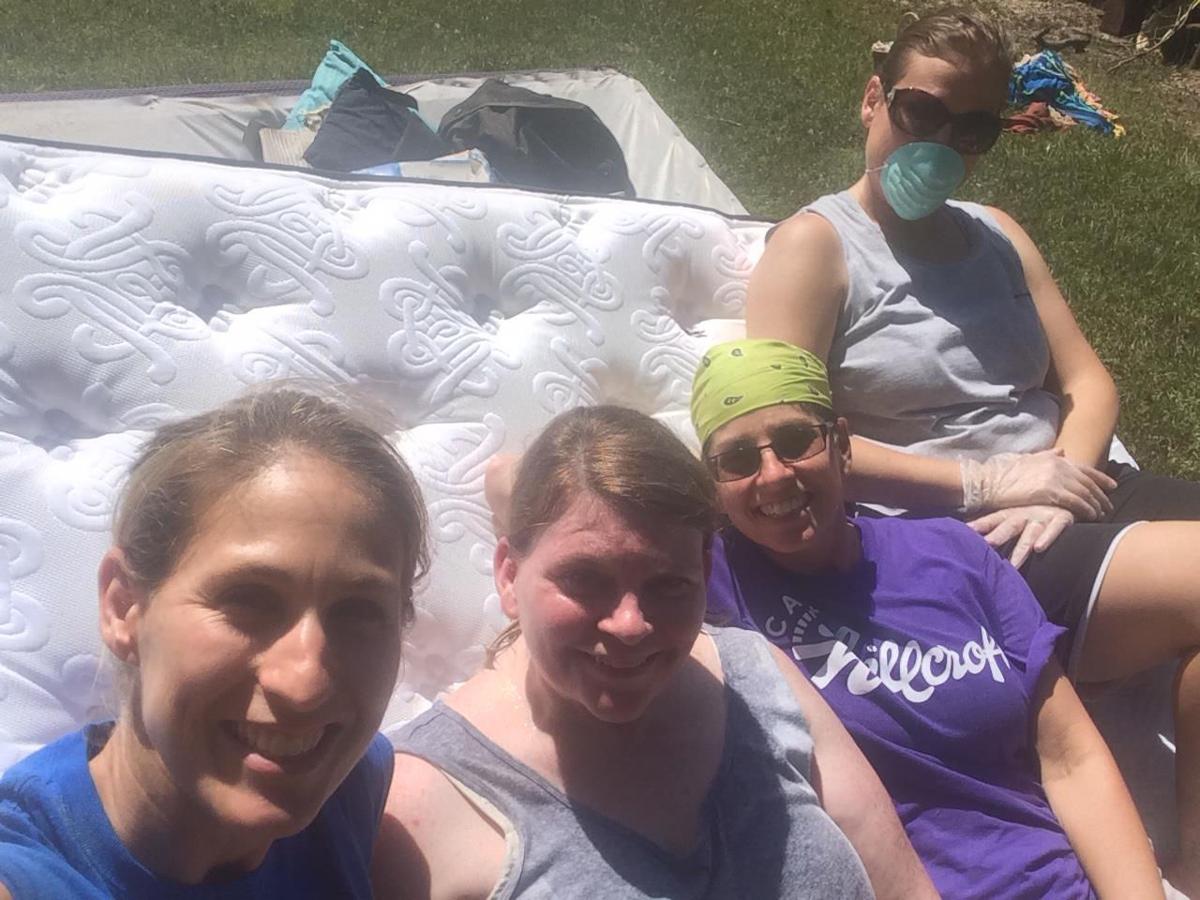 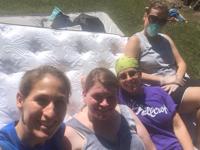 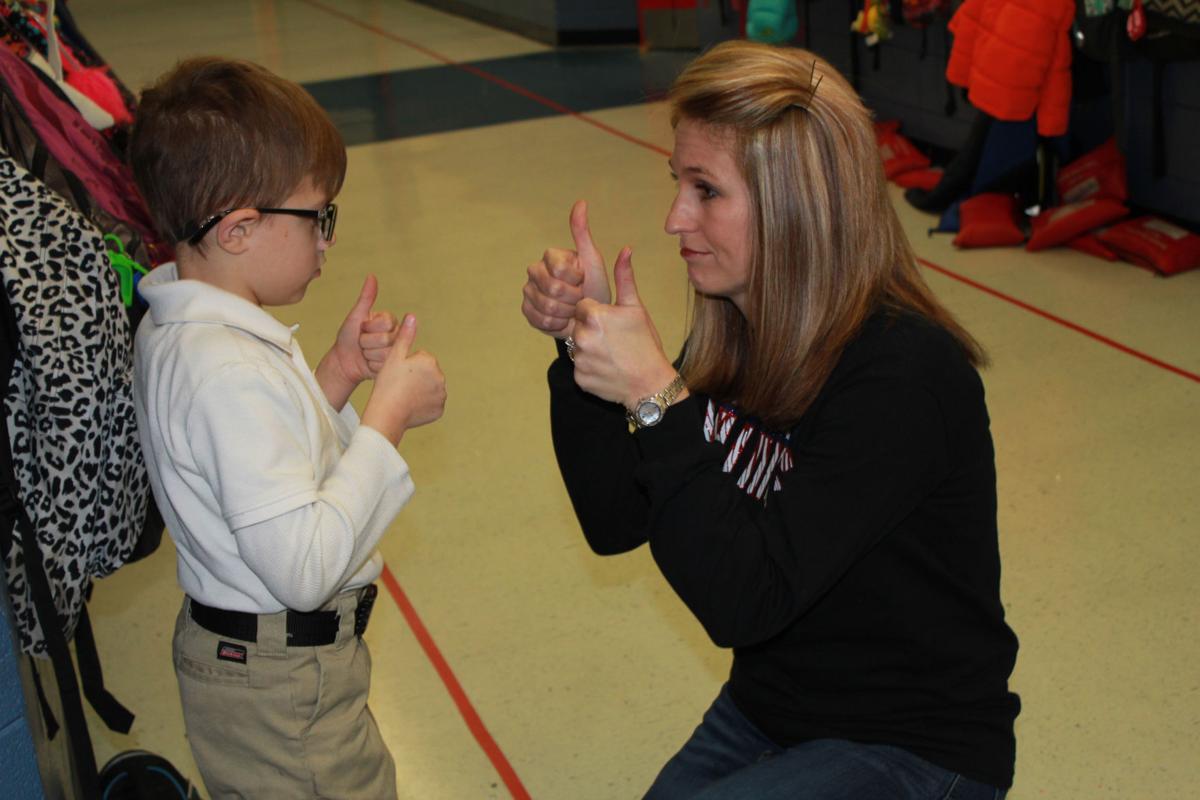 Eastside Elementary Assistant Principal Lauren Kennedy gives two thumbs up to third-grader Les Mayers during one of her morning "check in" sessions. Kennedy created her "check-in, check-out" program to better connect with students on the campus. 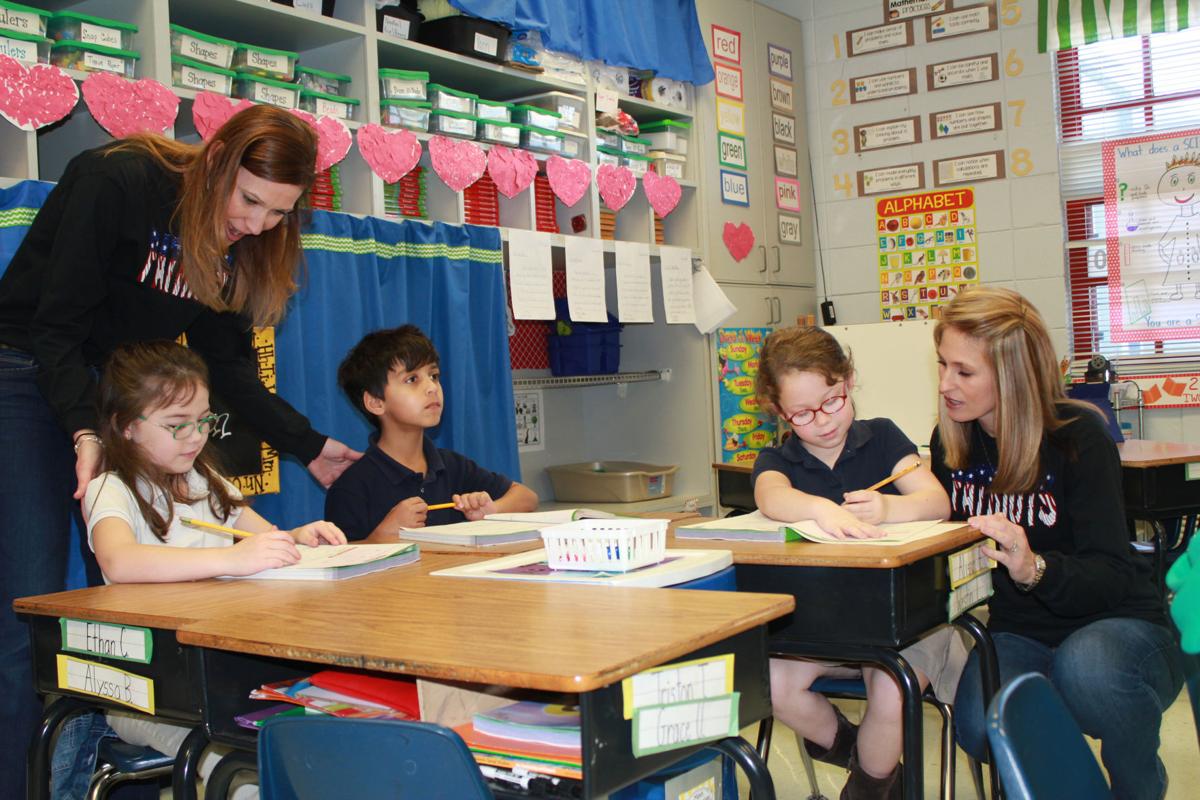 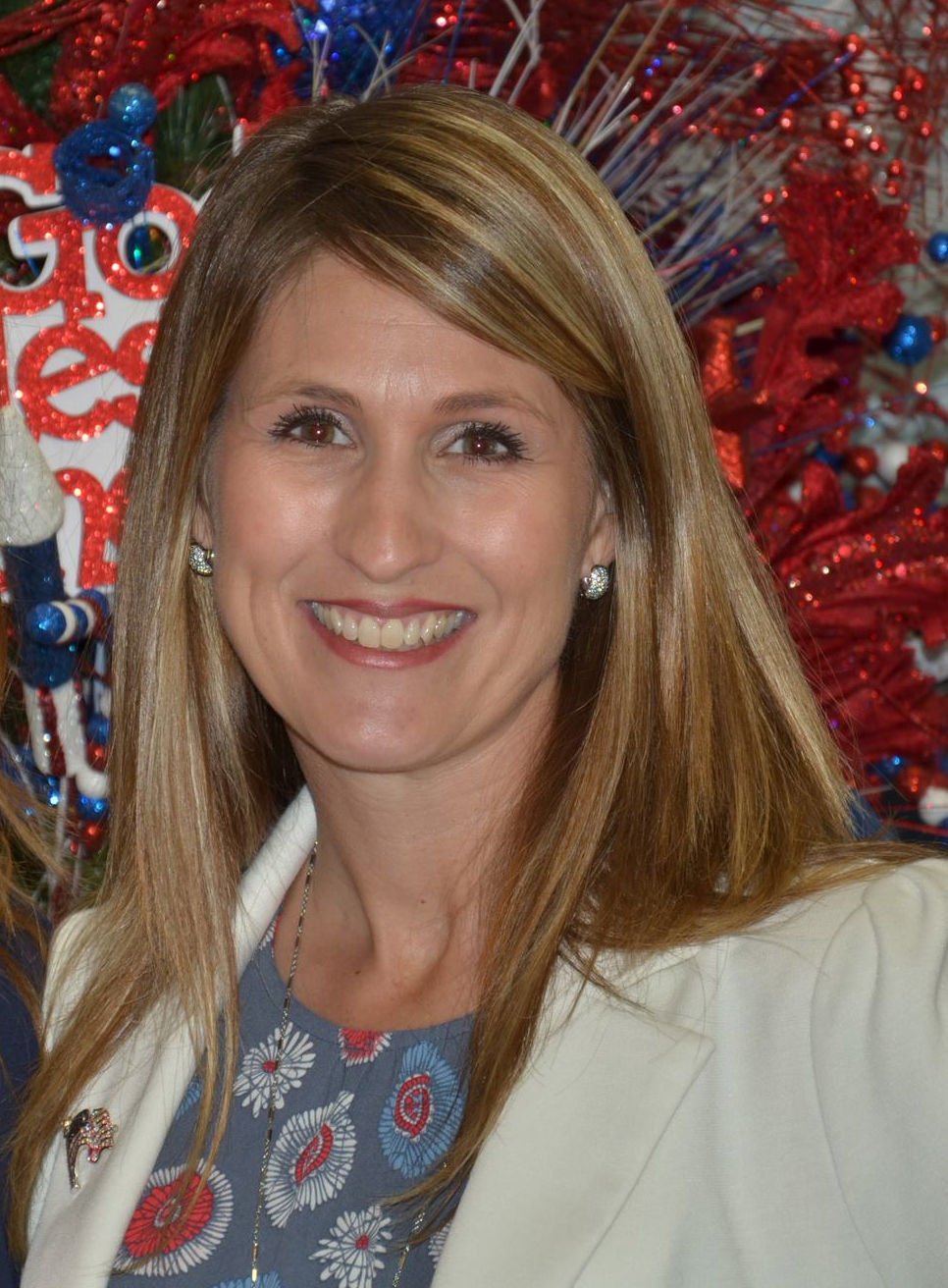 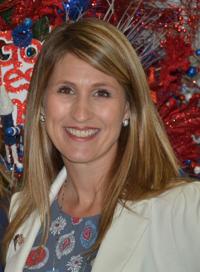 Lauren Kennedy, 2017-2018 nominee for Life Changer of the Year Award 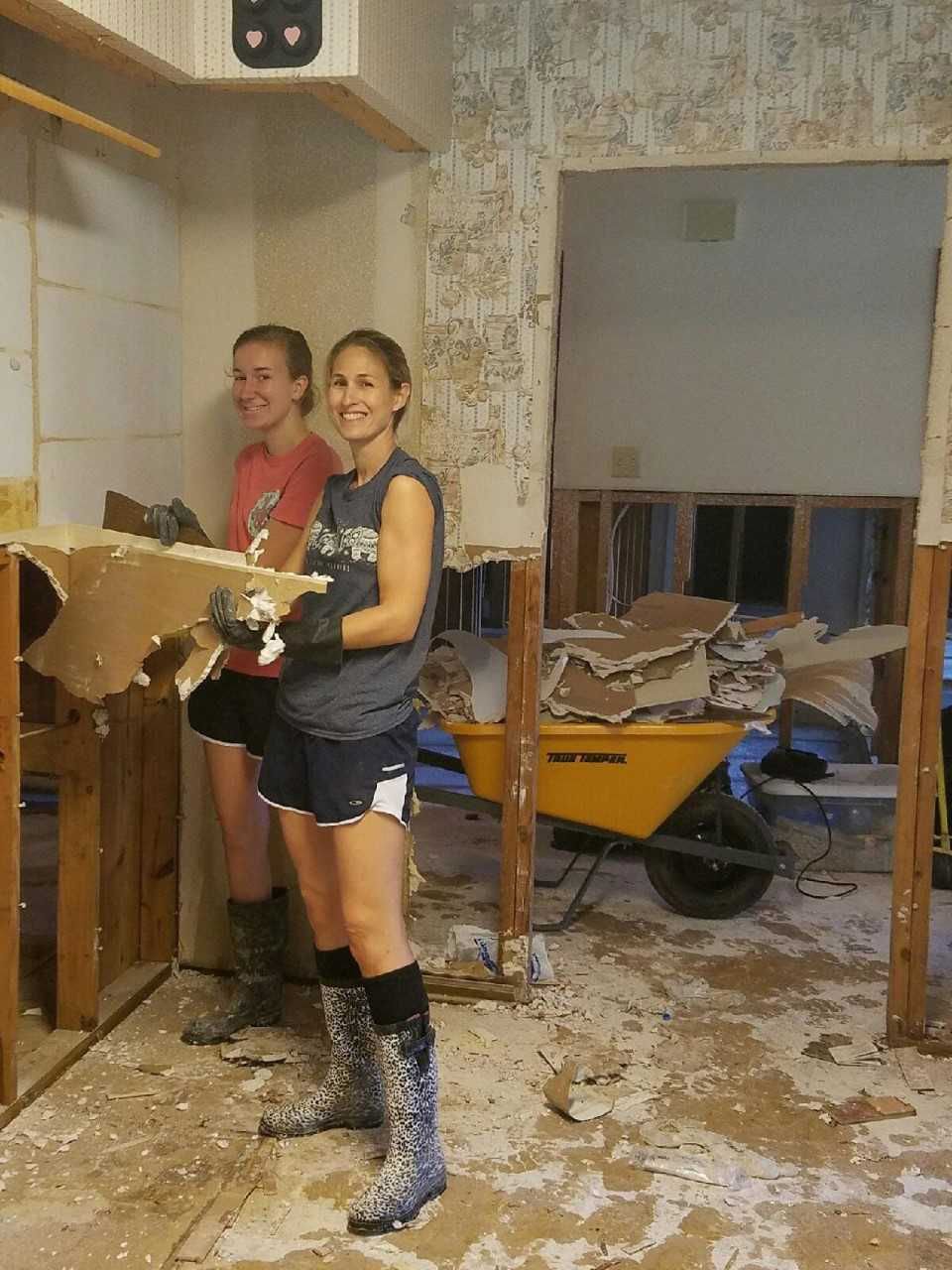 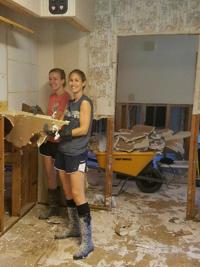 Lauren Kennedy works alongside Emily Seighman, tearing out sheetrock from a home after the August 2016 flood.

Eastside Elementary Assistant Principal Lauren Kennedy gives two thumbs up to third-grader Les Mayers during one of her morning "check in" sessions. Kennedy created her "check-in, check-out" program to better connect with students on the campus.

Lauren Kennedy, 2017-2018 nominee for Life Changer of the Year Award

Lauren Kennedy works alongside Emily Seighman, tearing out sheetrock from a home after the August 2016 flood.

DENHAM SPRINGS — Eastside Elementary Assistant Principal Lauren Kennedy is a nominee for the 2017-2018 Life Changer of the Year Award for the positive impact she has made in the lives of her faculty, staff and students, a news release said.

Life Changer of the Year is an awards program that recognizes K-12 educators and school employees across the nation who make a significant difference in the lives of others by exemplifying excellence, positive influence and leadership. The winner and top finalists receive a cash award for themselves and their school districts from National Life Group, a life insurance and investment firm.

Kennedy is credited with organizing flood relief efforts for her school's community following the August 2016 flood, the release said. Like most people in the area, Kennedy wanted to do what she could to help. But what made Kennedy standout was her experience dealing with flood recovery, her leadership skills to organize and motivate people to do important tasks, and her faith-based determination to bring hope to those around her, the release said.

"Lauren will tell you that she feels like she's not done anything special to receive this nomination, but the difference between Lauren and others is that she displays her kindness and helpfulness every day. She thinks nothing of it, because it's just a part of who she is," Eastside Elementary Principal Kelly LaBauve said.

"When the 2016 flood devastated so many in our school family, she stepped up and turned our campus into a distribution center for our affected families," LaBauve said. "And when our employees need someone to turn to, it's Lauren you see them pull aside for counseling or prayer. When our students are struggling or they just need someone to pick them up, Lauren has a special way of connecting with them."

LaBauve noted that Kennedy initiated a "check-in, check-out" program at their school several years ago that has allowed her to positively influence students on the campus. Each morning she consults with several students about their day's activities and expectations and then follows up with each one in the afternoon for a full report.

"There is no person more worthy of the title of Life Changer than Lauren Kennedy," LaBauve said.

Kennedy was nominated for the award by a former high school classmate, Sean Davis, who heard about the awards program and knew about Kennedy's efforts in her school community.

Davis documented how Kennedy quickly went into action to help others after the flood. He noted that as soon as the waters receded and people could drive into the damaged areas, Kennedy began organizing teachers and volunteers to go into the homes of Eastside Elementary employees and parents whose homes had flooded and to help them with their recovery efforts. She organized cooking crews, deconstruction crews and delivery crews who transported cleaning supplies, packing material and food. Each morning, nonstop for two weeks, she gathered her team of volunteers at the school at 9 a.m., sorted supplies and food, and handed out tasks to be done for the day.

Kennedy credits her ability to be calm after the storm with having gone through a similar situation twice as a child — in 1990, and again in 1993. She said she can remember the devastating impact of losing her home to floodwaters and watching her father worry.

"You don't know where to start. The situation is overwhelming," she said. "I can remember the aftermath of losing our home in a flood. A church group came to our home and helped us clean up and begin our recovery effort. They told us where to start and what we needed to do. Everyone quickly got into the rhythm of doing the work, but it took those special people to get us moving in the right direction."

"I knew I could be that person during this flood. I had been there, and I knew most people just needed encouragement, love and a little push to get them going," Kennedy said.

Lori Landry, a fifth-grade teacher at Eastside Elementary whom Kennedy and others helped after the flood, said she equates Kennedy to Louisiana National Guard General Russell Honoré, who did much to calm the turmoil in New Orleans following Hurricane Katrina.

"She came to our rescue," Landry said. "And she's still our go-to person now. We can count on her to be our best cheerleader when we're needing positive encouragement when dealing with our students or even our personal lives."

"You just know she has a compassionate heart," said Eastside Elementary second-grade teacher Pam Davis. "Lauren wants to help anyone any way she can. She is so approachable. Her door is always open."

Kennedy is competing against more than 250 people from every state in the nation. The finalists and overall winner are expected to be announced in March.

"To be called a 'life changer' is quite a daunting title," Kennedy said. "So many others participated in our recovery effort, and they continue to be an integral part of what we do here at our school," Kennedy said.

"I just hope that what I do — this day and every day — can somehow have a positive impact on others. That's what I believe I'm called to do."