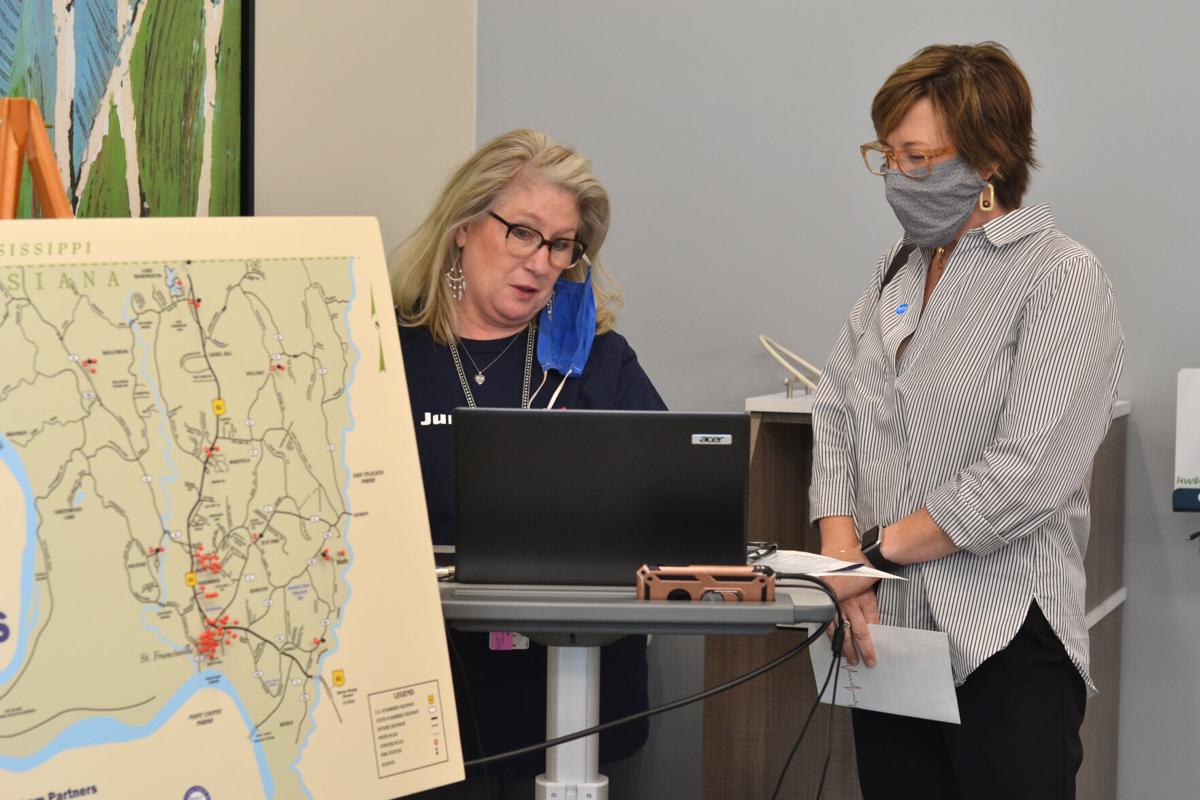 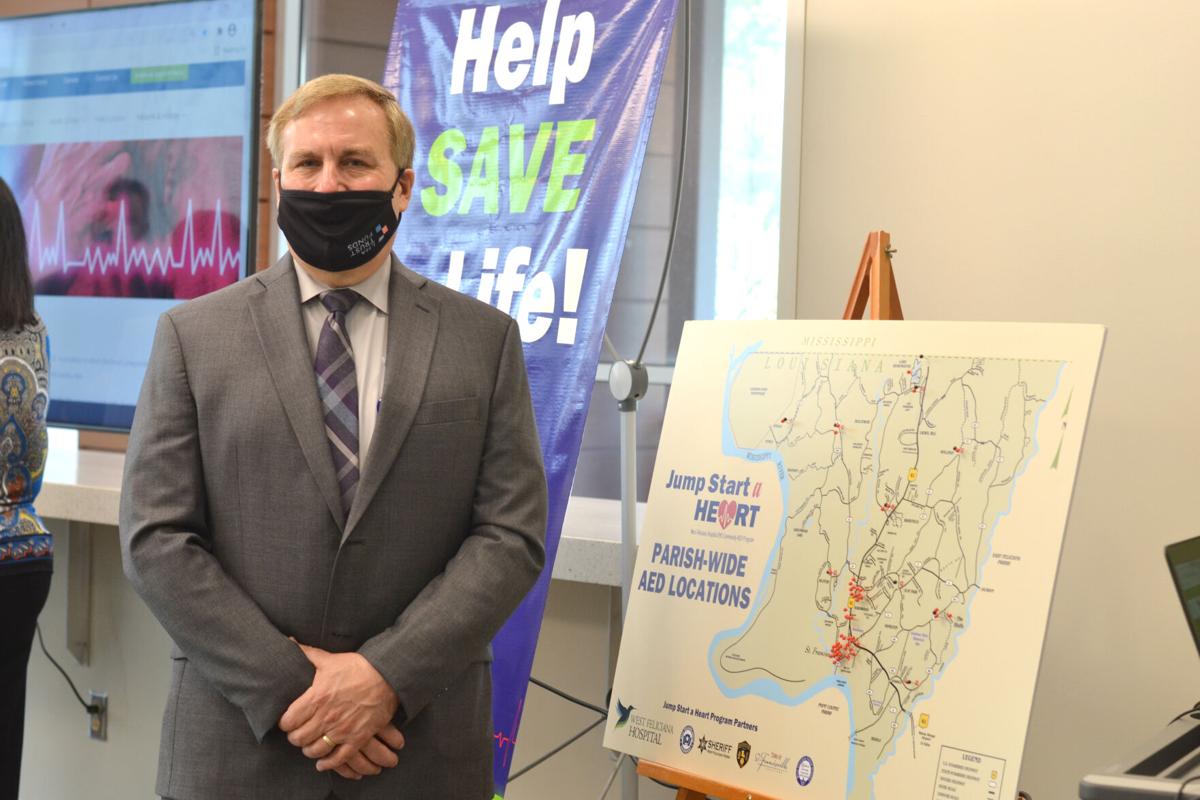 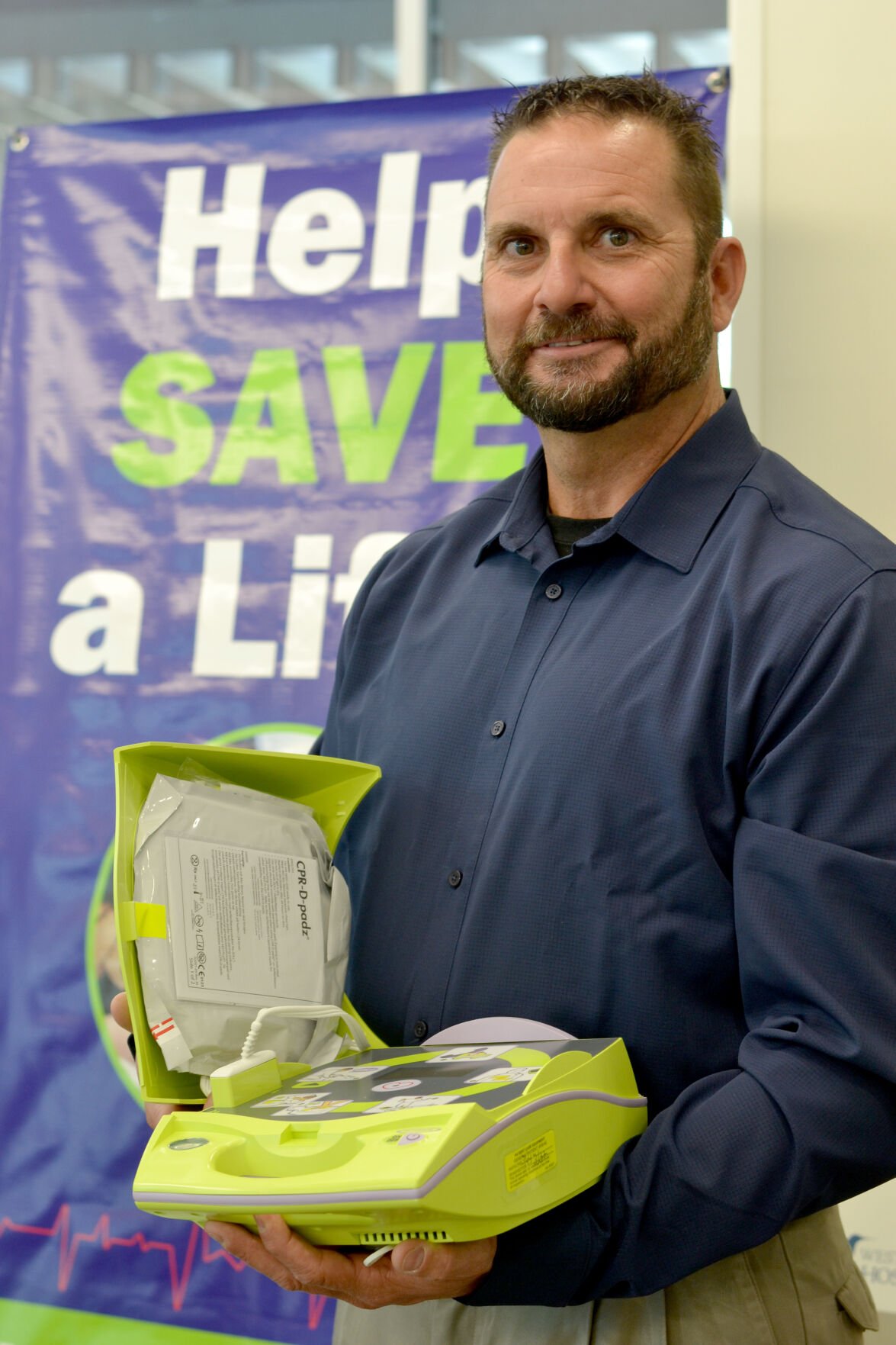 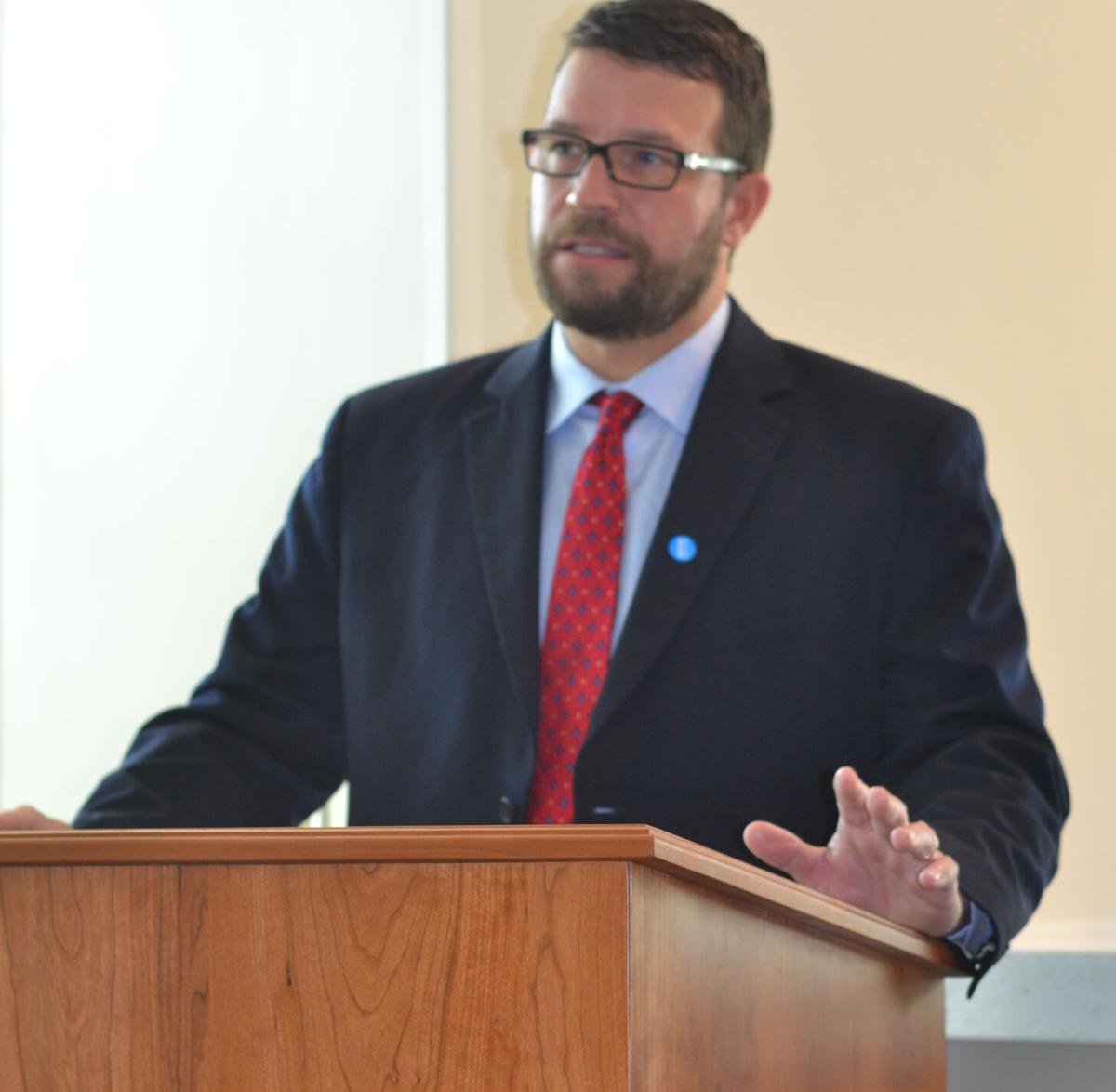 West Feliciana School Superintendent Hollis Milton addresses community and business stakeholders during the unveiling of the groundbreaking Jumpstart a Heart Program Monday, March 22. The program that pairs AED units and community participants is the first of its kind in the state. 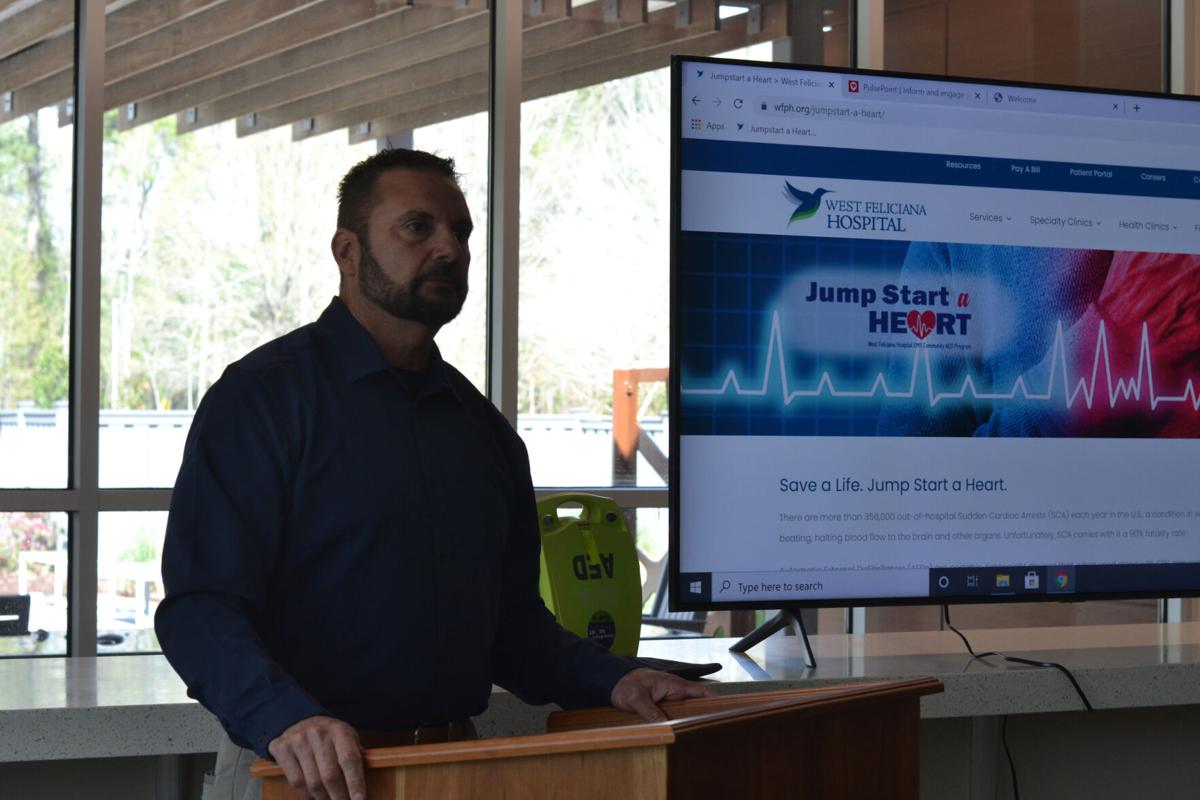 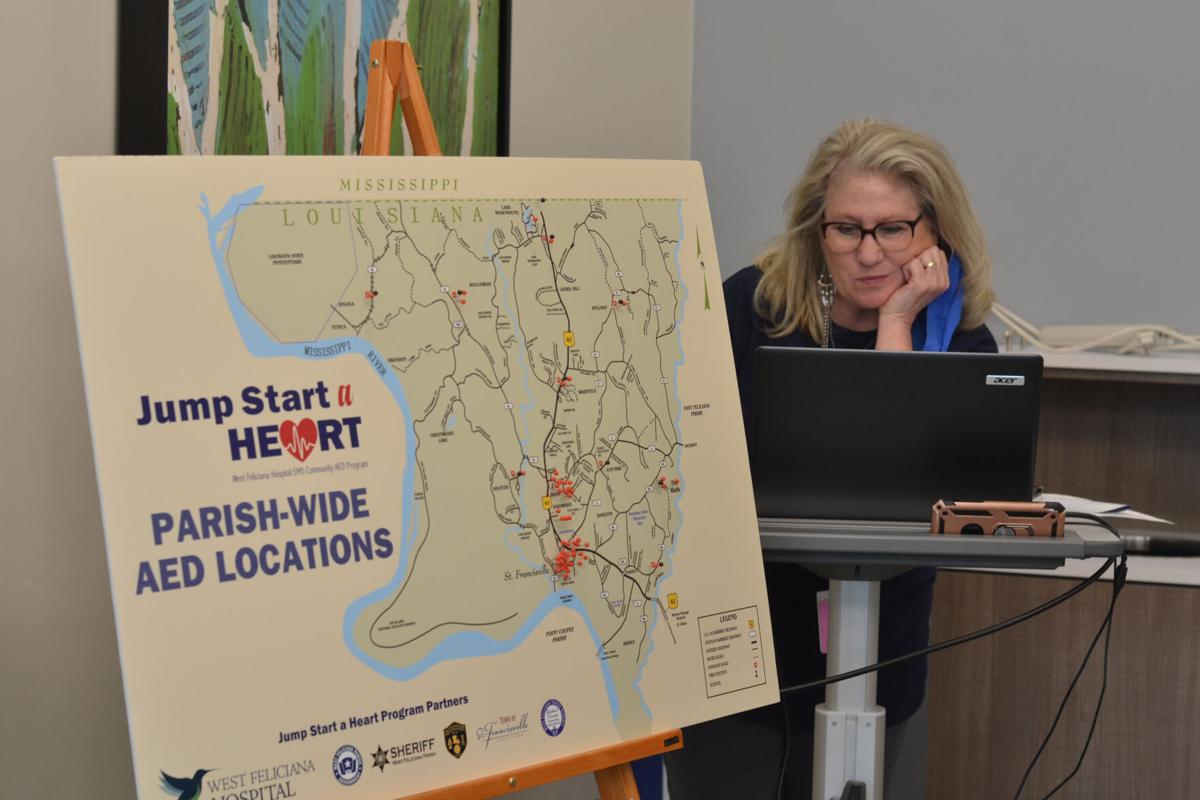 West Feliciana School Superintendent Hollis Milton addresses community and business stakeholders during the unveiling of the groundbreaking Jumpstart a Heart Program Monday, March 22. The program that pairs AED units and community participants is the first of its kind in the state.

When Hollis Milton got a radio call that a heart had stopped on a West Feliciana campus, several hearts joined in a figurative sense as school officials jumped into action knowing each second was crucial to survival. A defibrillator was used to jumpstart the still heart and Milton was later told without the device, a 13-year-old child would have died.

Milton, now the superintendent of the school system, shared the story March 22 at the unveiling of the Jumpstart a Heart Program, an initiative that will place Automatic External Defibrillators throughout the community while also encouraging parish residents to download and use the hospital’s new 911-connected PulsePoint Respond App.

The process that saved the middle schooler can be safely replicated and save others in the parish. “This child, by the way, had not been playing sports, was actually watching a basketball game with two other teams,” Milton said. “So there was nothing there that made you think that you would have an issue.”

A coach grabbed the AED device, applied the electrical shock, and revived the child. Later, the emergency room doctor called Milton and told him that the child would have died in his gym had it not been for that device. “That experience really defined the importance of these devices,” he said. “And it also defined this simplistic piece of it; that they're very user friendly that anyone can use as it tells you what to do. When I became superintendent here, I started asking questions: do we have a device, and if we don't, where do we need to put them and how can we make sure that our folks know to feel very comfortable using them.”

Lee Chastant, West Feliciana Hospital CEO, said the groundbreaking program is the first of its kind in the state and was the brainchild of EMS Director Chris Fitzgerald. “We actually started working on this about two years ago,” Chastant said. “Chris came to me with this idea, and I asked him to research it.”

Fitzgerald’s research led him to a small Arkansas community using the PulsePoint smartphone app to alert community participants of cardiac arrests. “Once we got that piece in place, we knew we could make this happen,” Chastant said. “It's taken us a while due to COVID delays. It's been a long process but well worth it.”

Sudden cardiac arrest kills nearly 1,000 Americans a day and when those victims do not receive CPR until professional help arrives, the survival rate is only 11 percent. Cardiac arrest, while often associated with the elderly, can strike at any age. “I think it's awesome that the hospital leadership board, Mr. Lee Chastant, and so many others have decided to do this for our parish,” Milton said. “We're a really unique parish, we have so many strengths. And I think one of our greatest things is everybody comes together and sees if something is good for our community, they have to step up and do it.”

The EMS-led program will bridge the gap with life-saving care between a sudden cardiac arrest and the arrival of emergency responders. The hospital is registering all AEDs in the parish and purchasing additional units to strategically place defibrillators across the parish. Residents are encouraged to download a 911-connected PulsePoint Respond App, which will provide access to a map showing the locations of all AEDs across the community in an emergency. The app is available to both iPhone and Android users.

The PulsePoint app empowers residents and those trained in CPR can volunteer to become a Citizen Responder. These volunteers will be notified by the app if they are in the vicinity of a cardiac emergency and directed to the victim’s location so they can administer help prior to the emergency responders’ arrival.

The West Feliciana rural landscape, a population spread further apart, creates unique emergency preparation challenges, Fitzgerald said. “There's so many areas where there's maybe one or two people living there, so time for getting to that patient quickly and safely is crucial,” he said. “Also, when you think about the program itself, we are trying to place these out everywhere. Sometimes some of these remote areas don't even have a building, so we have to try to be creative with where we put the units.”

Fitzgerald’s department is relying on research to determine how to place the AEDs within five minutes from everywhere in the parish. “Even if it’s just one of two people in an area, they still pay taxes,” he said. “So, we want to serve everybody that we can get to and not just in the crowded areas.”

The EMS department has placed 12 units outside fire department buildings and in cabinets with signage on the covers to help them stand out. Existing and privately owned devices can be registered and become a part of the parish mapped locations. Groups interested in registering an AED can contact program coordinator Dawn McBeth at (225)635-2446 or McBethD@wfph.org.

Chastant explained that the program funding like the implementation was collaborative. The hospital applied and received a $25,000 health care grant from a subsidiary of the Louisiana Hospital Association and additional support came from the hospital and community partners including the fire and sheriff’s departments. “Sheriff Spillman is also instrumental in helping us work with 911 and the fire department has allowed us to put the AEDs strategically in all their fire department locations,” Chastant said. “So, it's been important for us to do that.”

First responders in the parish will continue to used emergency education to teach CPR and other skills in informal settings such as community street fairs, group training sessions, take-home DVD-based courses, or even by watching brief online videos. In addition, West Feliciana Hospital holds routine CPR training sessions throughout the year. Visit https://www.wfph.org/resources/events-and-classes/ for a list of scheduled classes. McBeth can also help organizations schedule a CPR training classes.

For more details on the program and AED locations, visit https://www.wfph.org/jumpstart-a-heart/ .

Fitzgerald hopes the Jumpstart a Heart initiative can be a model for other Louisiana parishes and municipalities because it is impactful and financially feasible. “It's not in everybody's budget, but I think we did a pretty good job,” he said. “It's easier in an urban an area to justify a program like this, but in a rural area where there's not a whole lot of cardiac arrests all the time, financially, seems like it wouldn't make sense. But, if you save one life, and you’ve done something.”