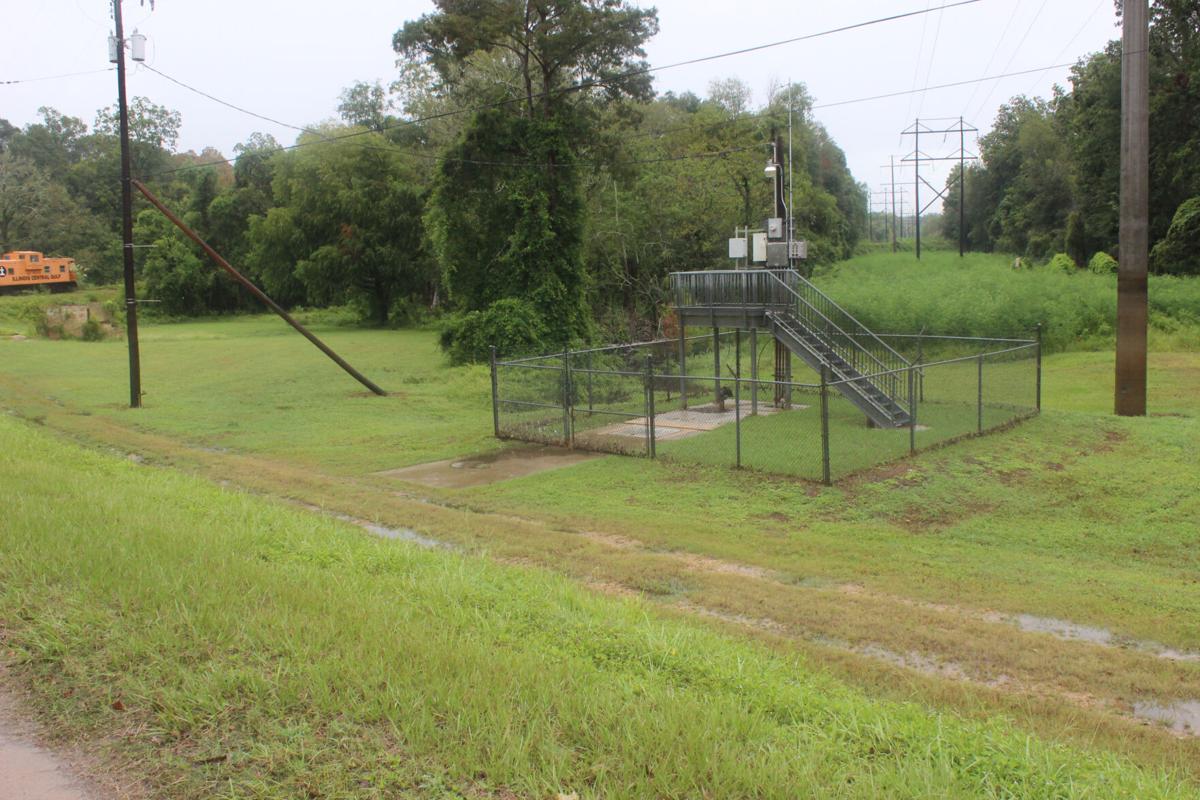 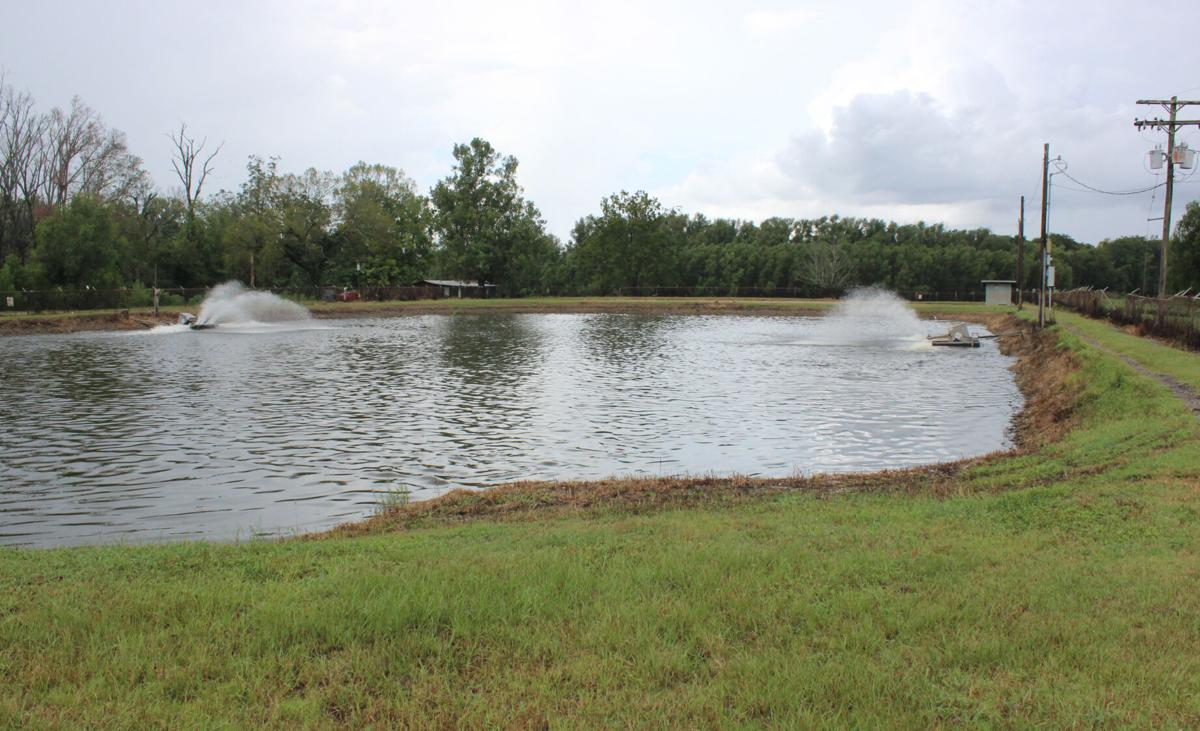 Aerators spray sewage water collected in this oxidation pond, one of two used to treat St. Francisville’s sewage before it is discharged into the Mississippi River. Frequent and prolonged flooding of the ponds has forced town officials to seek a half-cent sales tax increase to build a new treatment plant. Plans also call for the remediation of the ponds, including back-filling them after they are drained and dredged.

Aerators spray sewage water collected in this oxidation pond, one of two used to treat St. Francisville’s sewage before it is discharged into the Mississippi River. Frequent and prolonged flooding of the ponds has forced town officials to seek a half-cent sales tax increase to build a new treatment plant. Plans also call for the remediation of the ponds, including back-filling them after they are drained and dredged.

ST. FRANCISVILLE — Before he steps back from a long public-service career, Mayor Billy D’Aquilla has one remaining goal: persuading voters to back a plan to solve a major problem facing St. Francisville.

D’Aquilla and the Board of Aldermen are asking the town’s voters to support a half-cent sales tax increase that will be on the ballot Dec. 5, with the revenue dedicated to moving the town’s often-flooded sewage treatment plant to higher ground.

The half-cent tax would last for 15 years, and the revenue it generates, estimated at $500,000 a year, would be dedicated to the sewer project, the mayor said.

D’Aquilla, who is recovering from the coronavirus, is in his ninth term as mayor, and his successor, either Robert “Bobee” Leake or Susanne “Susie” Tully, takes office Jan. 1. D’Aquilla also served three terms as an alderman, beginning in 1972.

D’Aquilla said the Louisiana Department of Health approved a permit for the treatment plant’s location, between the Mississippi River and the ridge on which most of the town sits, in 1969. The effluent from the twin oxidation ponds flows into Bayou Sara, which empties into the river a short distance away.

The Health Department did not object to the location in the floodplain at the time, he said, but now its location is the problem.

When the plant floods, raw sewage goes into ditches below the town and flows untreated into the river, he said.

Engineer Bianca Hillhouse said the Mississippi flooded the site “once in a blue moon” until 2009, when the frequency of the flooding increased dramatically.

Hillhouse said the local consensus is that the river has silted up in the area and lost its capacity to handle large volumes of water coming down from the upper Mississippi basin.

“The Corps (of Engineers) used to dredge the river and send the silt downstream, but that’s been stopped,” the mayor said.

The West Feliciana Parish side of the river does not have man-made levees to protect against flooding.

Using data from U.S. Army Corps of Engineer’s river gauge at the paper mill south of town, Hillhouse determined that the oxidation ponds flooded nine times in 11 years, including 2019, when it was underwater for roughly half the year.

D’Aquilla said the final sewer lift station before the oxidation pond, located on the edge of the flood plain, overflows during floods and sends raw sewage into the ditches.

“I start getting complaints, and I have to send people down there to spread lime in the ditches,” he said.

Hillhouse said state and federal agencies have not issued a compliance order or fined the town for the frequent discharges, but something has to be done.

Hillhouse said the “magic number” in terms of the elevation the town seeks for a new plant is 56 feet, and a possible site has been located east of the existing ponds.

Instead of oxidation ponds, the new treatment facility will be a mechanical plant that will discharge directly into the river near the Corps of Engineers mat-casting field.

“It will be more compact,” Hillhouse said.

She said the plan calls for the new treatment facility to intercept the town’s existing sewer lines at two points, and two new lift stations will be needed for sewage to reach the new plant.

D’Aquilla said the St. Francisville Area Foundation owns the land and is open to selling it to the town.

The mayor said the proposal has been studied for months.

If voters approve the half-cent increase, the town will sell bonds through the Louisiana Community Development Authority, D’Aquilla said.

The total sales tax levied in St. Francisville is now 9.45%, the mayor said, and the increase would still keep it just under 10%.

The town already collects a one-cent sales tax, which D’Aquilla said is vital to funding other operations of the town.

D’Aquilla said the sewer treatment plant was in the forefront of the town’s business when he first took office as an alderman.

“The original contractor went belly-up, and the bonding company had to finish it. It was hard dealing with them,” he said.

Now, as he prepares to leave office after 48 years and six months, D’Aquilla believes he and the aldermen have put the town in a position to eliminate the latest problem with the plant.

But the solution hinges on the tax vote.