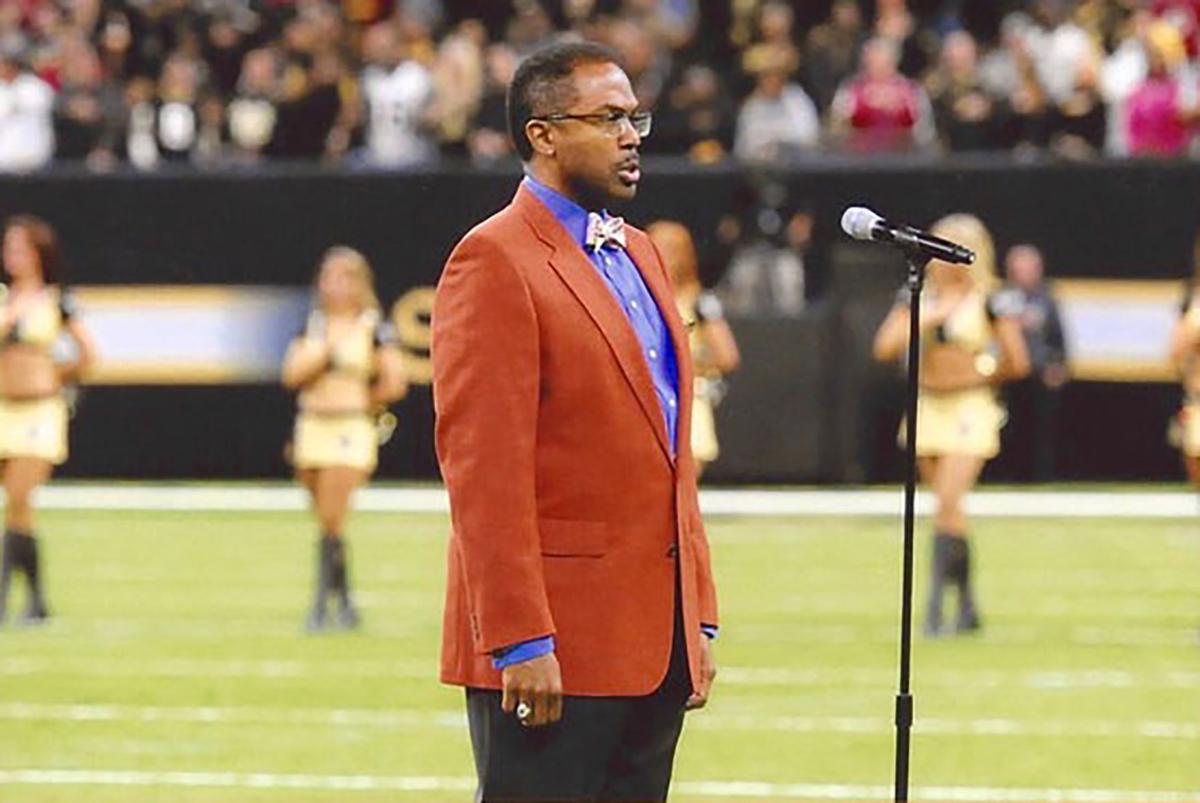 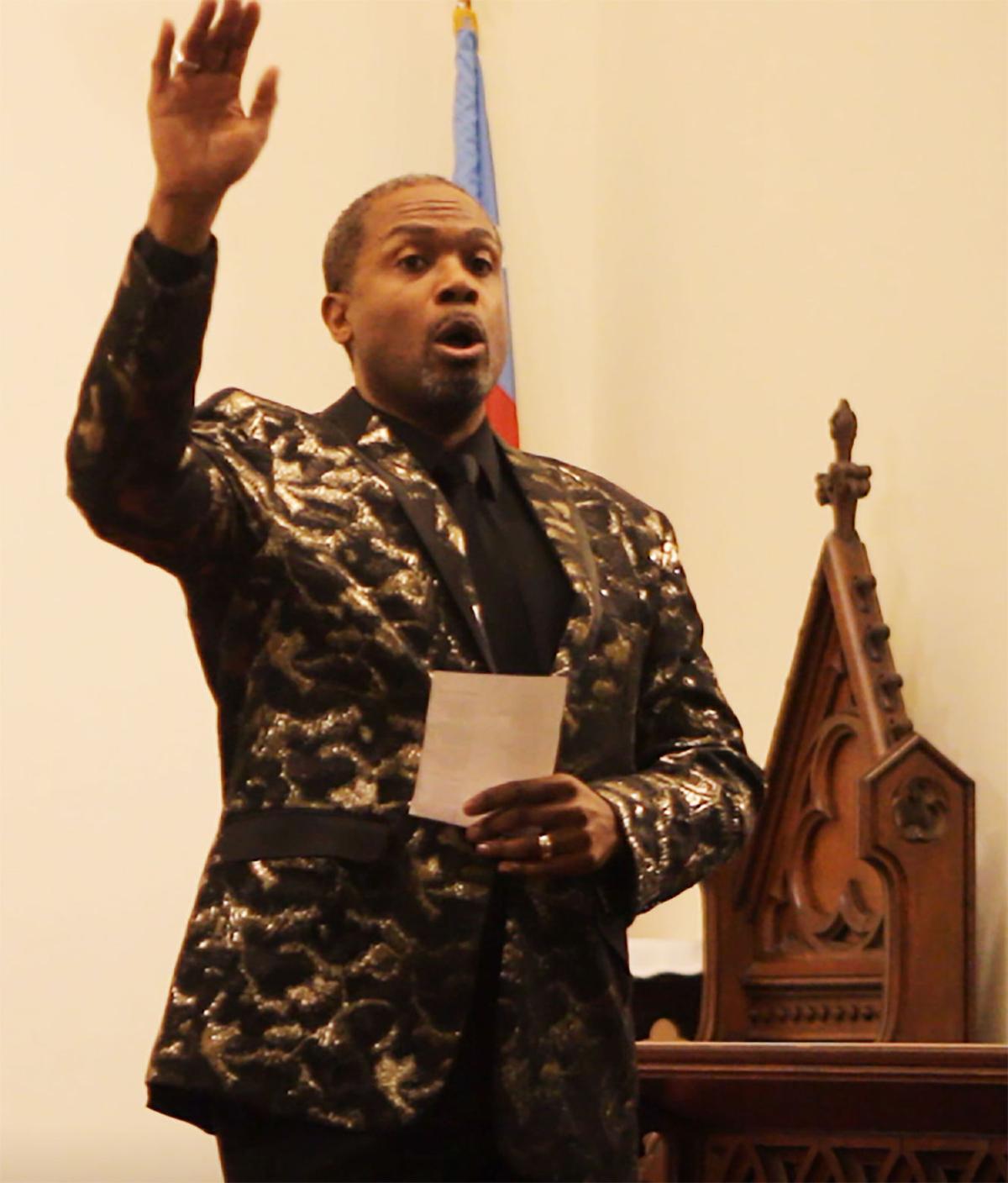 Ivan Griffin leads his Sounds of the Seasons audience in Christmas songs Dec. 6, 2019, at Grace Church in St. Francisville. 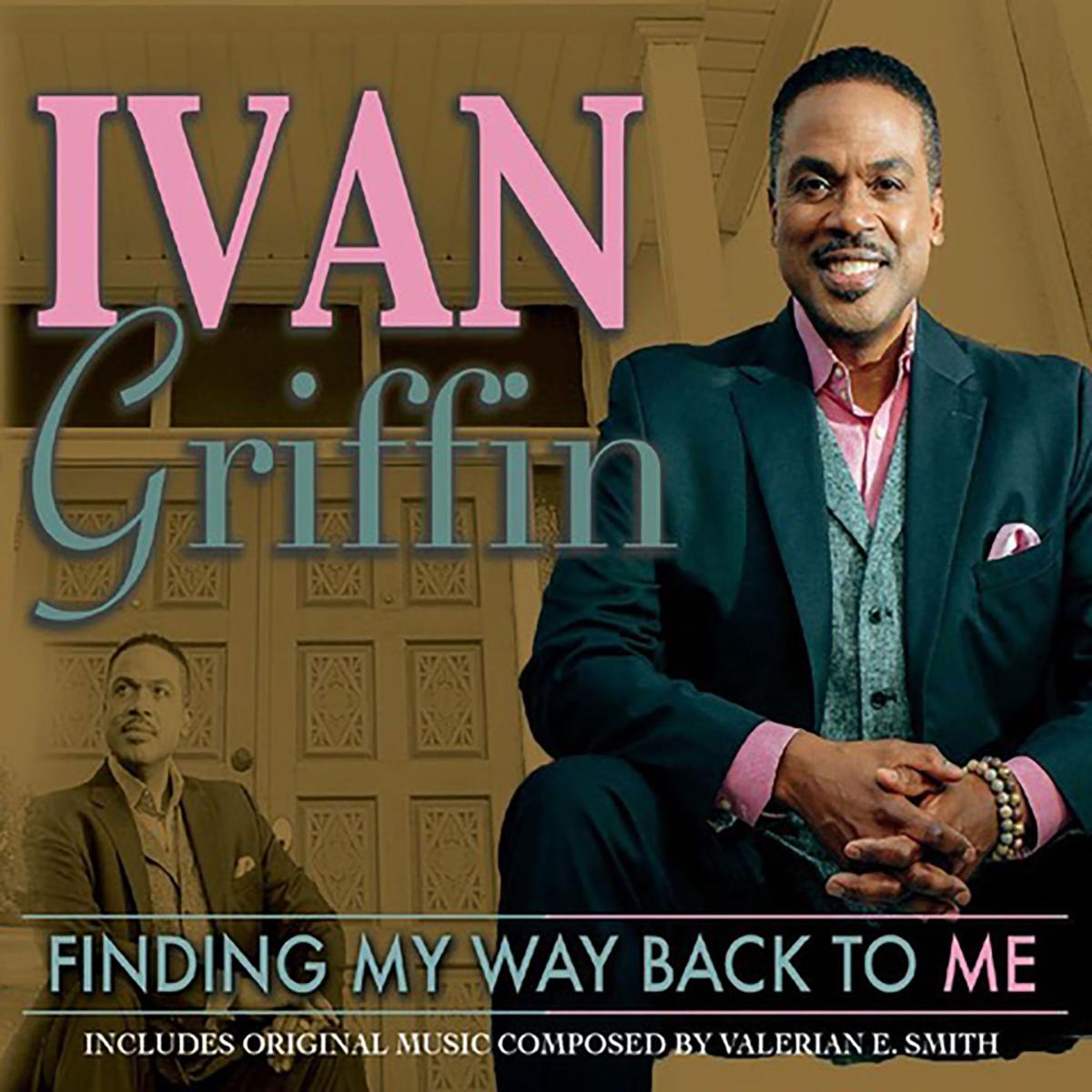 Classical bass-baritone Ivan Griffin’s most recent album, 'Finding my Way Back to Me' explores his personal and musical journey and was released in 2018. 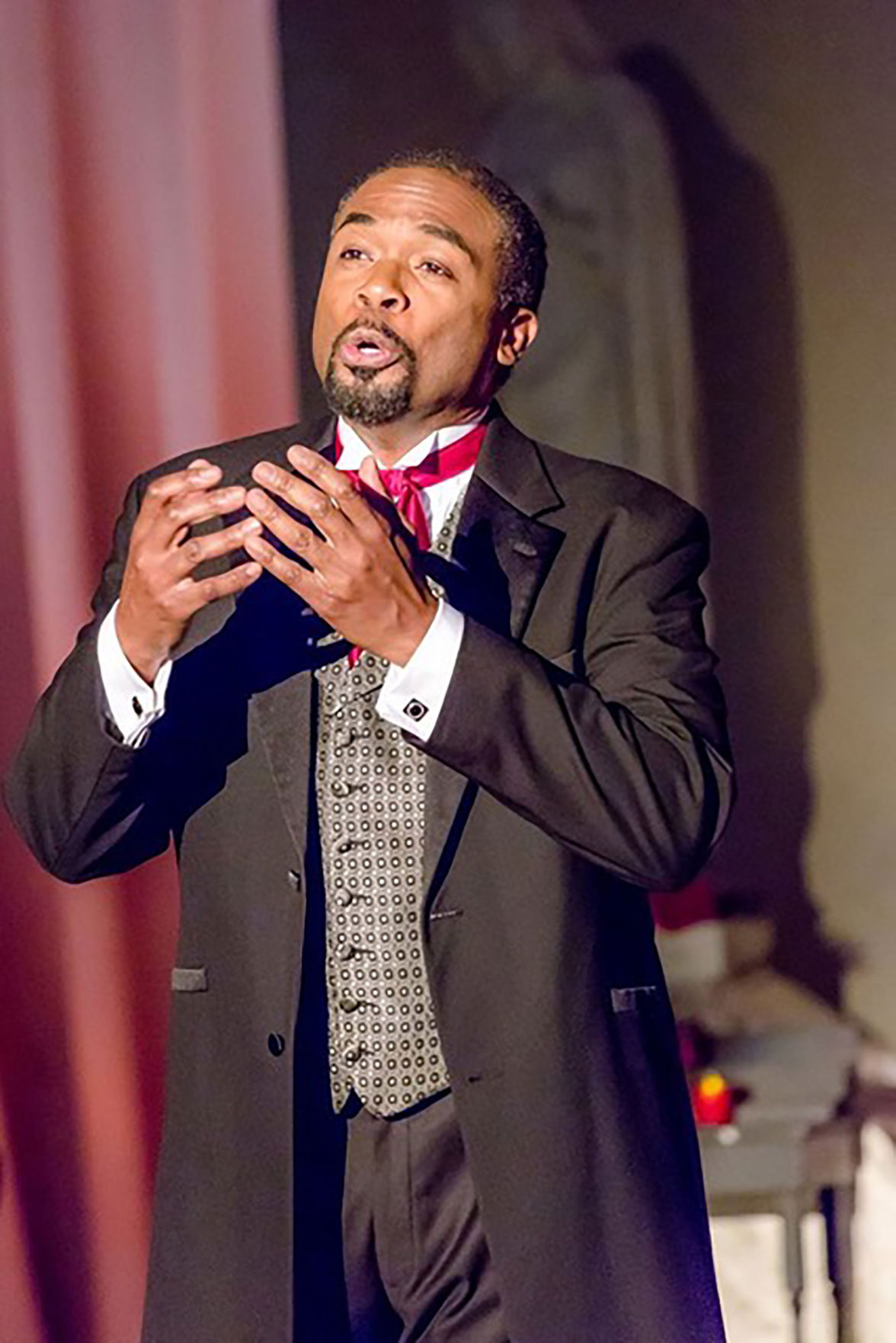 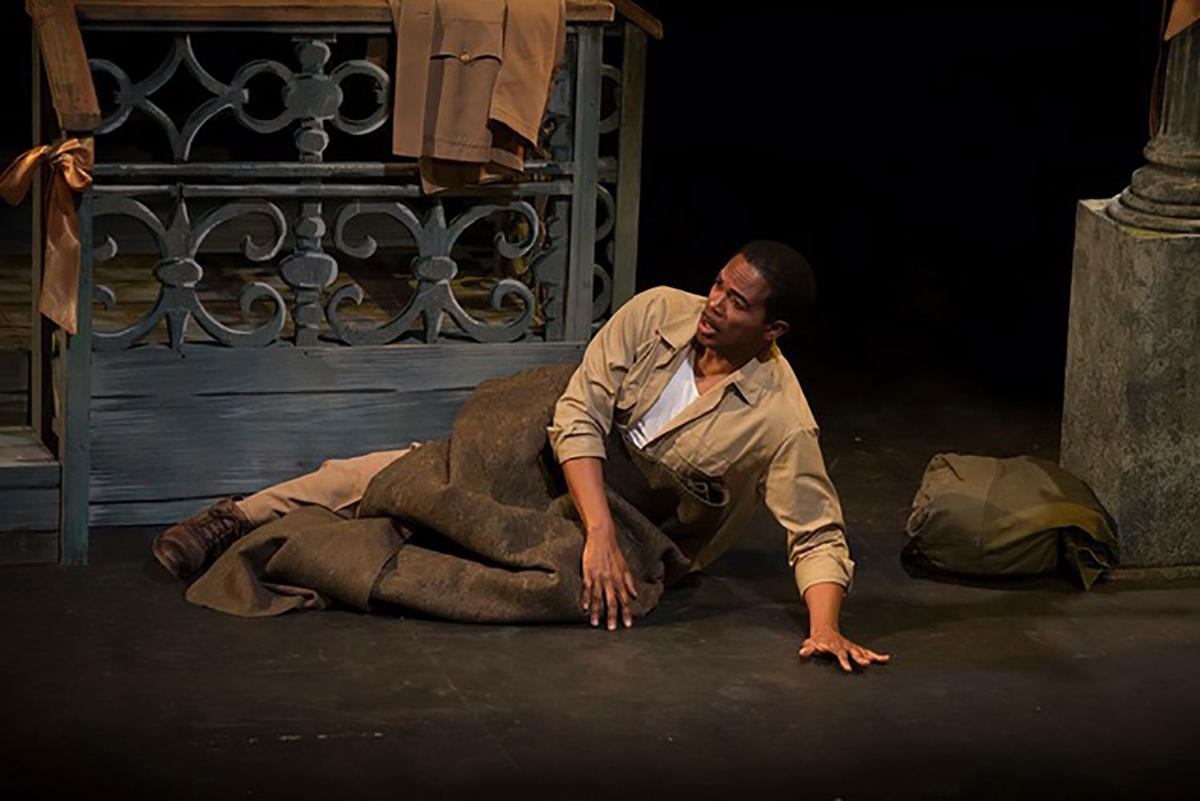 Ivan Griffin performs the title role of Ulysses in Opera Louisiane of Baton Rouge’s 2016 production 'The Return of Ulysses.'

Ivan Griffin leads his Sounds of the Seasons audience in Christmas songs Dec. 6, 2019, at Grace Church in St. Francisville.

Classical bass-baritone Ivan Griffin’s most recent album, 'Finding my Way Back to Me' explores his personal and musical journey and was released in 2018.

Ivan Griffin performs the title role of Ulysses in Opera Louisiane of Baton Rouge’s 2016 production 'The Return of Ulysses.'

Classical baritone Ivan Griffin’s journey has placed him in opera houses in Italy, France and Switzerland. Although he has graced stages in Spain and South Africa, his journey could not come full circle until he embraced Southern’s Bluff, the Felicianas, and family roots in Zachary.

Griffin’s debut album, "Finding My Way Back to Me," alludes to the artistic expressions of gospel, classical, and stage music, but, on closer inspection, it also tells the story of a man exploring his cultural and family roots to discover who and what he is in an effort to reconcile those factions into one individual.

Griffin, while performing during a benefit to restore the Old Benevolent Society building in St. Francisville, admitted that he was drawn to the project partially because of his roots to the area that remained in fallow soil. He told the Sounds of the Season audience that his mother, Jerutha Thigpen, has family roots in Wilson and throughout the Felicianas and his father, Joseph Griffin, is from Zachary.

“I only visited Wilson as a little boy a long time ago with my grandmother, my parents, and my brother,” he said. “And we would drive through Zachary, but we never stopped in Zachary, so I didn’t know very much about Zachary.”

His other connections to the Felicianas were through Southern University classmates.

Classmate Gigi Thomas, now Gigi Robertson, is on the Board of Alderman in St. Francisville, and introduced the Sounds of the Season, the restoration project and its significance to St. Francisville and Feliciana area.

Robertson and Griffin were students at the same time at Southern University. “I had the pleasure and privilege of singing at Gigi’s coronation when she was crowned Miss Southern University, a song that was written by Dr. Valerian Smith called “Gigi,” and I serenaded her with that,” Griffin said.

A return to the Felicianas was also a return to the hometown of classmate and professional collaborator Thomas Dawson Jr., the producer of "Finding My Way Back To Me." Dawson is the music director for the world-famous Commodores and the grandson of John Sterling Dawson, the first educator of African American children in the St. Francisville area and the namesake of Dawson High School.

Griffin recalls that Dawson was a musical force even as a student at Southern University. “Thomas and I would collaborate as students, but Thomas was out performing quite a bit,” he said.

The first step of Griffin’s journey after Southern University was the Eastman School of Music, in Rochester, New York, where he did his graduate work. He was praised for his “excellent diction and superb sense of theater.” He then performed extensively in the United States and around the world.

Griffin brings his extensive operatic and theatrical background to Loyola University where he is on faculty. A soloist at Trinity Episcopal Church in New Orleans, Griffin also serves on the faculty of the Ellis Marsalis Center for Music.

Griffin uses his album to reflect and collect pieces. His path into classical music and opera is a rarity for African American artists. He is aware that becoming a black classical baritone was far from an accident. “I was blessed to have had parents who were very supportive of us — my brother and me — growing up,” he said. “They gave us piano lessons, and we sang not only in the church choir, but we sang in the school choir and in community choruses.”

“We were exposed to the classical arts through our parents, so we got a broad range from classical to R&B to gospel because I grew up in the black Baptist church,” he said. “I grew up singing gospel music.”

Griffin enjoyed watching opera on PBS when he was 12 years old. "I was watching an opera, the 'Merry Widow' by Franz Lehar, and I saw this woman singing, Beverly Sills, and they were making these beautiful sounds,” Griffin recalled. “I was 12-years-old and I remember thinking ‘hmm, I can do that.’ Color never entered my mind.”

That instance set Griffin on a path to study classical music more seriously, and he went to Southern and studied with Aldridge Atkins. In time, he returned to his roots of gospel music. “I laid it aside for a while as I studied classical music, but I felt something was missing in my life,” he said. “As time went on, I picked it up again.”

“I had to be true to myself,” Griffin said. “I didn’t have to put down classical music to embrace what was in my heart.”

The album, with songs written by Smith, Dawson and Griffin, embraces many genres and Griffin’s diverse background. “It’s been a journey — I started in one thing and then I transitioned into something else and then I finally landed in the middle,” Griffin said. “The pendulum swung both ways and it’s finally settled and that’s who I am. I am the sum total of all these things.”

The St. Francisville campaign to restore the burial lodge is being led by the Order of Eastern Star, Pride of St. Francisville, Chapter No. 12/Old Benevolent Society Committee, said Sara Wilson-Rogers, the group’s president. Benevolent societies played an important role in black communities following the Civil War. Originally formed to cover the expenses of medical care and burial, they also provided union and fellowship, especially to the sick and weak. Use of the building ceased in December 2016 due to needed repairs to the foundation and exterior, the group said.

Restoring that old building was pivotal to the reflection and reconciliation of Griffin’s journey. He saw that Dyvar Anderson had placed some information on Facebook about the Old Benevolent Society restoration, he said. “When I read that, it registered in my spirit; it clicked with me so I contacted her and said ‘if there’s something that I can do to help you to raise funds to restore this building, let me know.’”

Griffin said his family has benefited from benevolent societies. “My whole family, starting with my grandfather who was buried in an Odd Fellows cemetery in Slidell, was aided,” he said. “I understood how they were able to do that because the community, through the Benevolent Society, came together, way back in the day when my grandfather died, and helped my grandmother be able to bury him.”

“That was something special to her and to my family,” he added. “For me, to be able to see this community come together, was very important.”