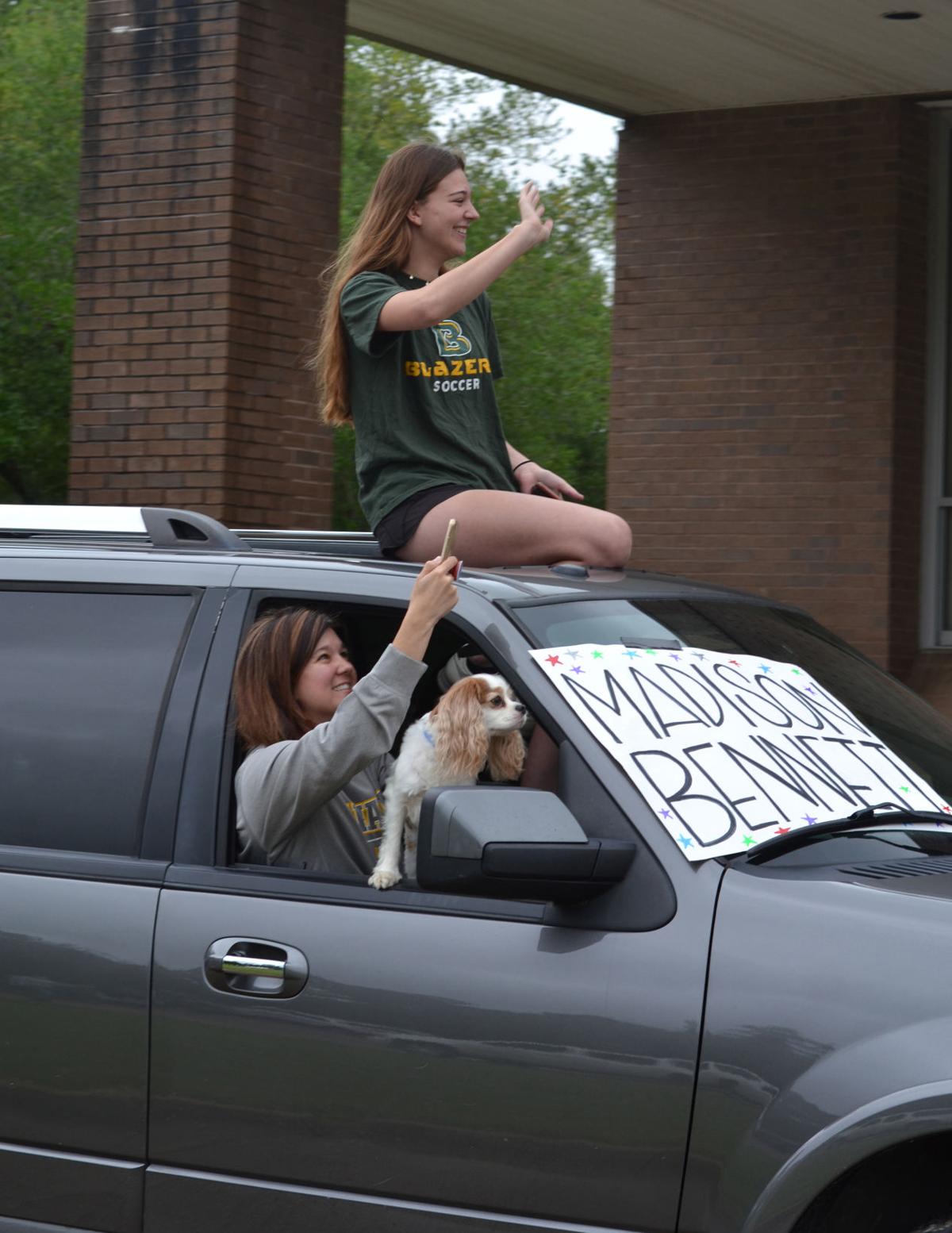 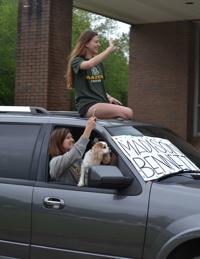 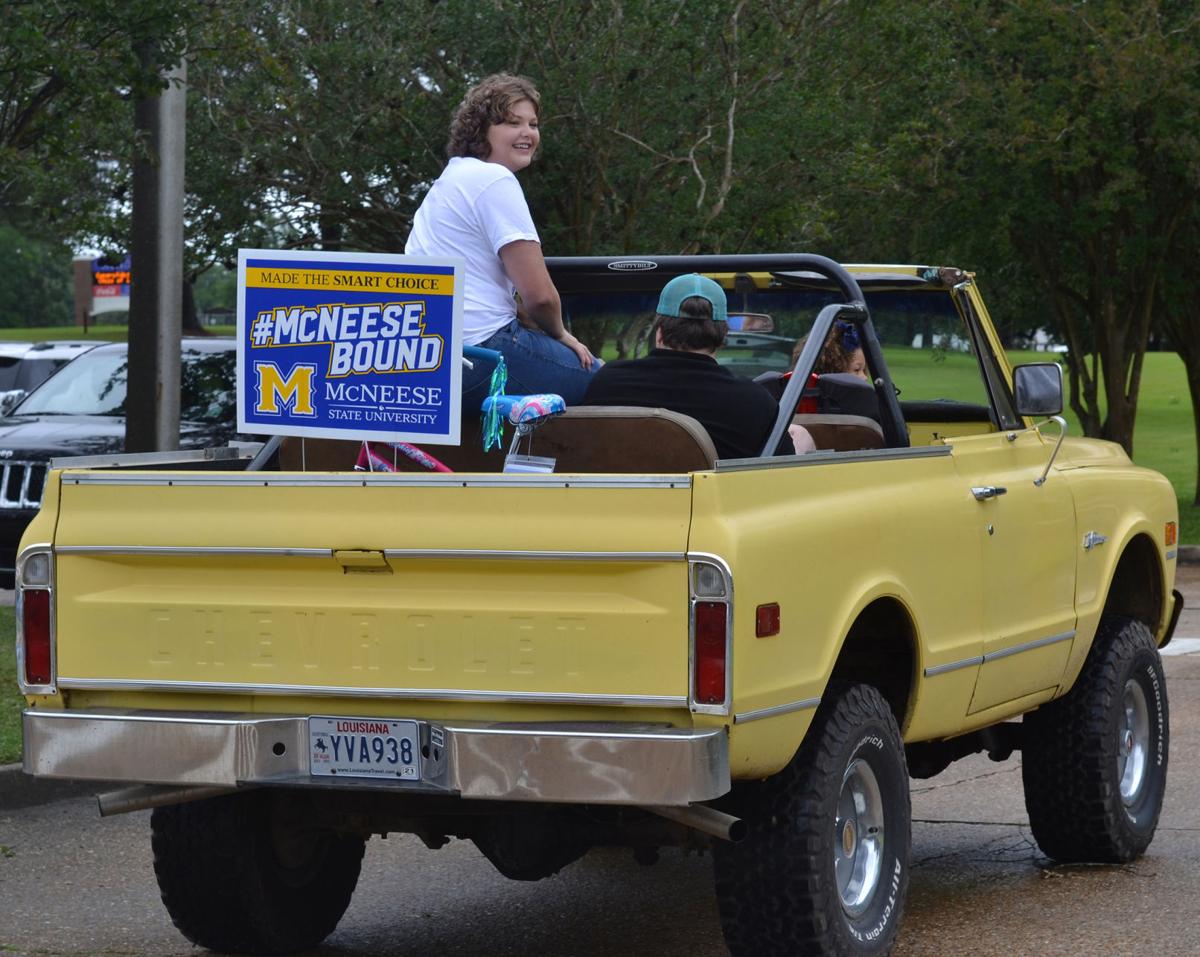 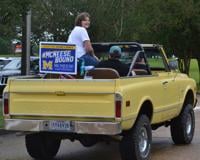 Lauren Mendenall responds to her cheering agriculture teacher Wednesday, April 29 at the tail end of the parade honoring the graduating class. 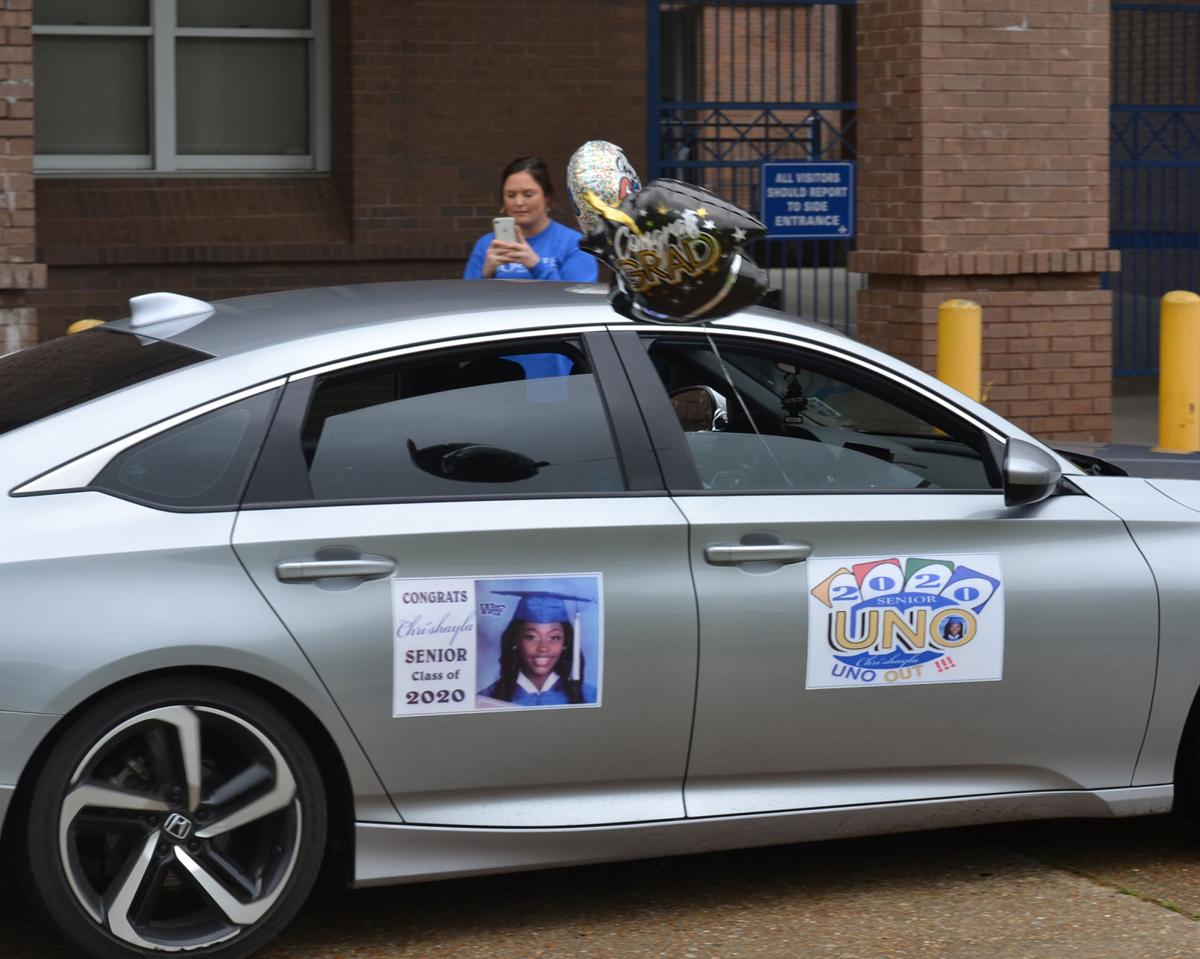 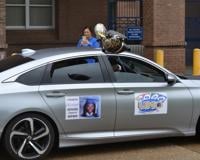 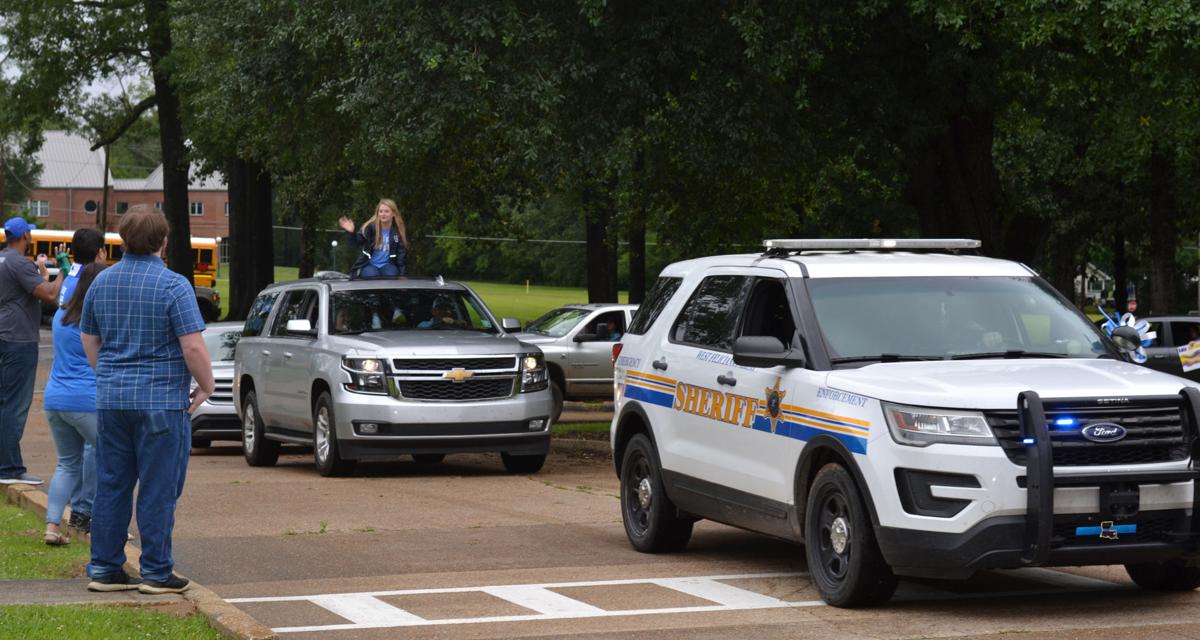 West Feliciana High School Homecoming queen Maddie Freeman leads the parade lineup Wednesday, April 29 during an event that honored the school’s 2020 graduates on what would have been their last day of high school before the COVID-19 pandemic cut their school year short. 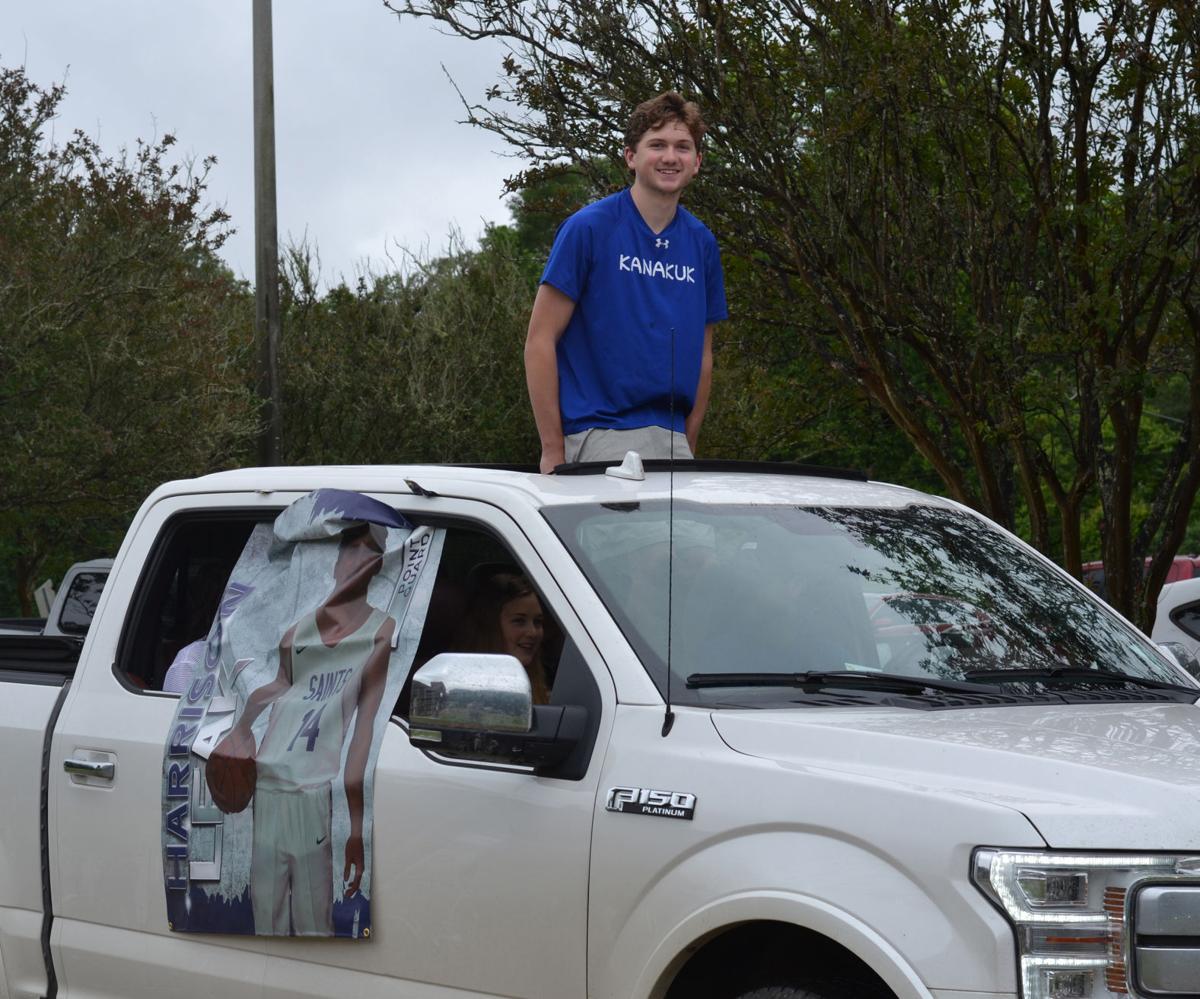 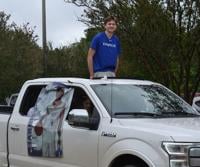 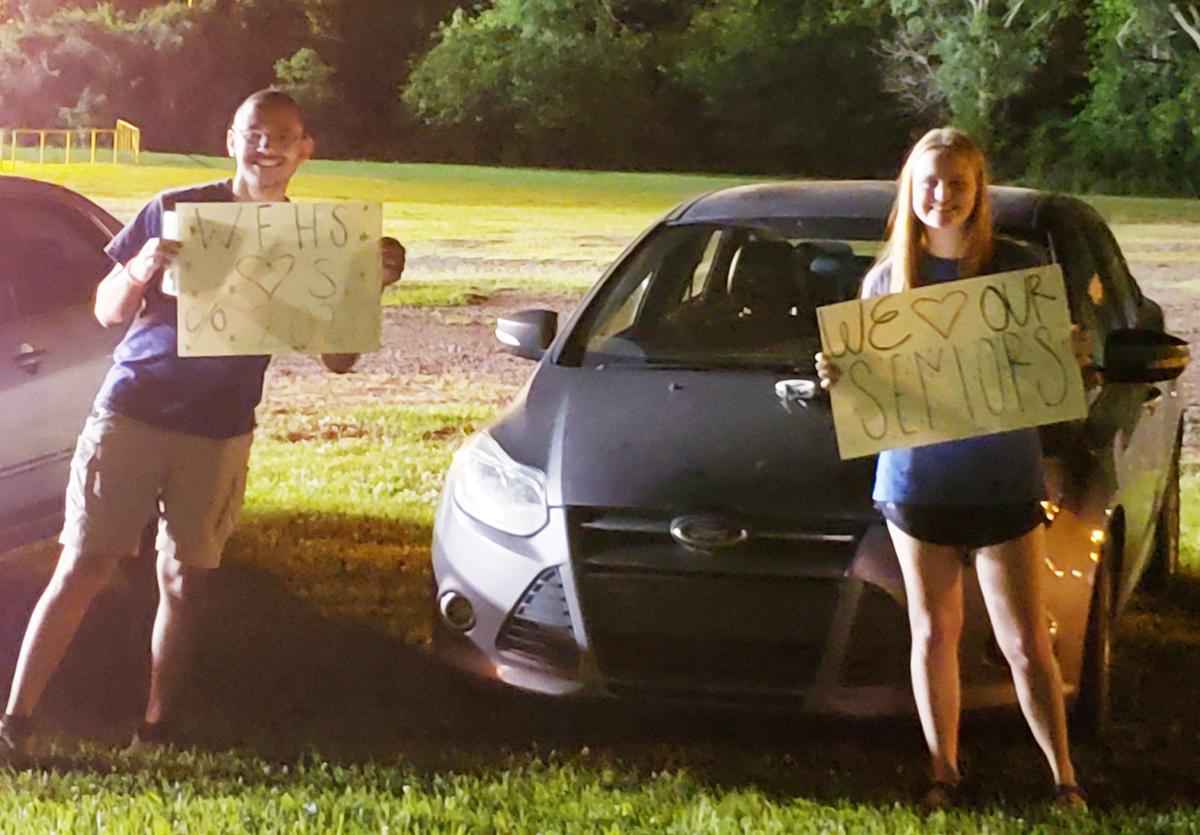 Caleb Dixon, left, and Katelyn Jones cheer on their fellow graduations Monday, April 13 during the Light up the Night event that signaled the end of the West Feliciana High 2019-2020 school year. Faculty and staff provided encouragement to graduating seniors and spring sports participants. 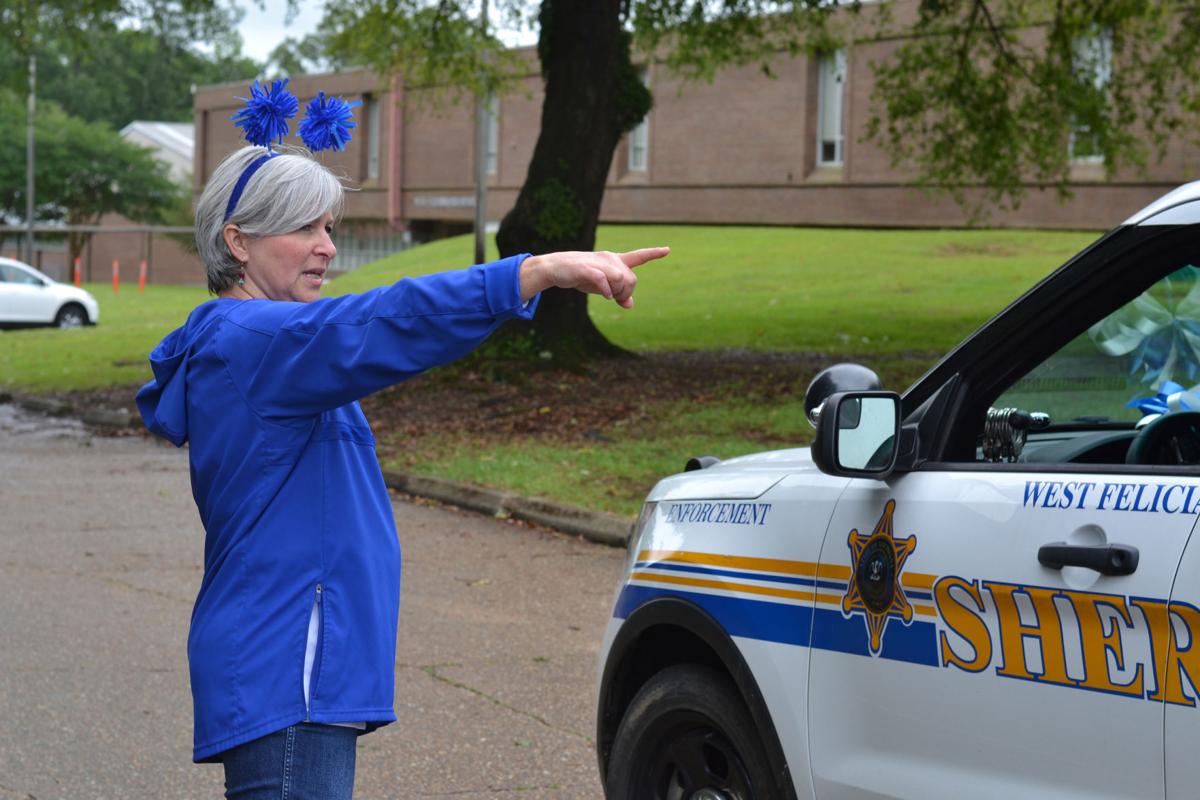 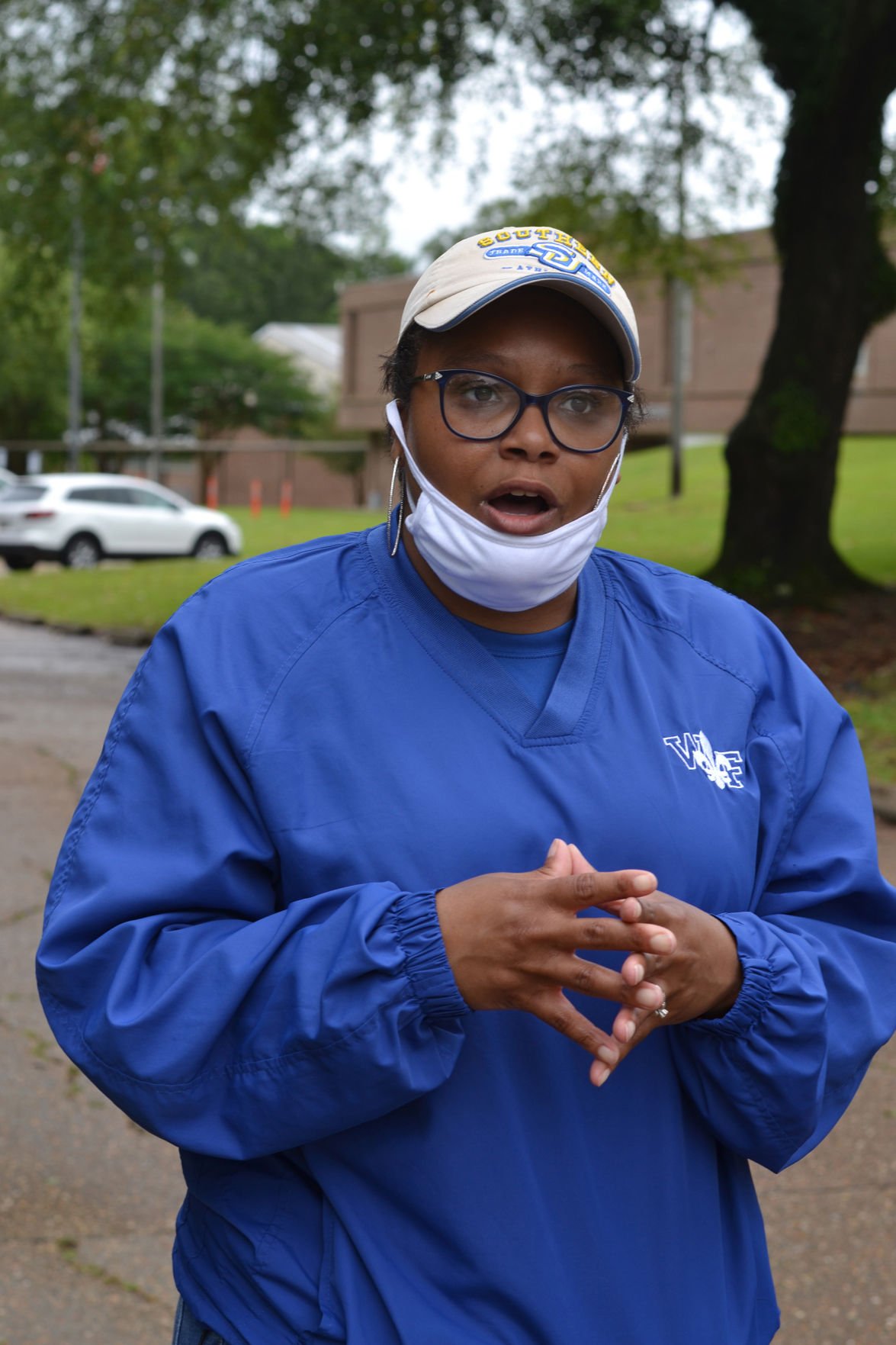 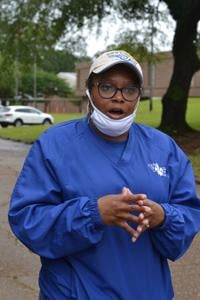 Lauren Mendenall responds to her cheering agriculture teacher Wednesday, April 29 at the tail end of the parade honoring the graduating class.

West Feliciana High School Homecoming queen Maddie Freeman leads the parade lineup Wednesday, April 29 during an event that honored the school’s 2020 graduates on what would have been their last day of high school before the COVID-19 pandemic cut their school year short.

Caleb Dixon, left, and Katelyn Jones cheer on their fellow graduations Monday, April 13 during the Light up the Night event that signaled the end of the West Feliciana High 2019-2020 school year. Faculty and staff provided encouragement to graduating seniors and spring sports participants.

Chri’Shayla Wilson, driving a car decorated with her picture and a popular card game piece, acknowledged that it wasn’t the best timing, but she was 2020, "UNO and out." Wilson and the other West Feliciana High School graduating seniors were treated to a parade Wednesday, April 29, that marked their final school year, cut short by the coronavirus pandemic.

A global health crisis has stolen prom, parties, and delayed ceremonies, but Wilson is stoic and realistic about the current state of affairs. “Uno and out – like I’m out of school,” she said. “It’s depressing cause I would be graduating May 8, but because of this Corona stuff, it changed and we can’t enjoy ourselves like we want to.”

Wilson’s family has made efforts to make her milestone special by buying gifts and cupcakes with her pictures on it and she was adopted multiple times through the social media “Adopt a Senior” campaign. "Pomp and Circumstance" playing or not, Wilson has set her eyes on the next phase of her life. She plans attend Southern University in the fall and major in business management.

Future plans were a part of many parade themes and other graduates paid homage to the sports or activities in which they participated. Lauren Mendenall will be studying agriculture at McNeese State University, her high school ag teacher said as the modified, bright yellow truck she was riding in passed.

Paul Theriot has taught agriculture and electrical studies for seven years. Saying goodbye is never easy, but this year adds an extra level of difficulty. “It has definitely been very different,” he said. “Several of our students have still been in contact with us through video chat. Lauren just recently had a birthday and we had a parade for her here.”

“For some of the students it’s been really tough to be able to say goodbye because you don’t have that typical end-of-the-year wrap-up,” Theriot added. “I teach kids in my program freshman through senior year so I have them for all four years. Some of them, I taught their older siblings, so I knew them when they were little. I lot of those kids, I started to know them when they are in fourth and fifth grade through livestock shows and programs.

The 2020 COVID-19 crisis also caught Abby Cochran in a transitional year. She was the principal for this class of students until this past year before moving into the instructional supervisor with the school system. She said she had not emotionally let go so saying goodbye in this way is a struggle. “I’m probably not great at it because I’m still ‘all up in their business,’ and that’s not my role anymore,” she said. “They are great kids and it’s hard stepping back anyway in my new position, but in this world that we in right now, it’s even harder.”

Cochran took part in the Light up the Night event held on April 13 and cheered on the seniors and spring sports participants after it was announced that schools would remain closed for the rest of the school year. “It is such a weird, crazy time, but at the same time, you are seeing families together that you haven’t seen in a long time so it’s difficult, but it’s got it’s up sides as well,” she said. “We are trying to keep everybody safe as we are also trying to make it special.”

Finishing up a school year is often a last-minute process that includes college preparation and making sure the requirements to graduate are in place. Principal Karoline Taylor has been preparing her seniors for the next level, but from a distance. “I am not going to lie, it’s been challenging,” she said. “It has been a collective effort for our office staff, administrators, guidance counselors, testing director and athletic staff. Our staff has been communicating with students, communicating with parents, making sure that they have what they need so they can be successful.”

Taylor said many parents had the staff’s personal cell phone numbers to communicate and plan. “It has been difficult, but I would like to think before this happened, the relationship between the school and the community was already strong,” she said. “It was an easier transition for us than maybe others because that relationship was already established.”

Most of the hard work is over, but the emotions of graduation, goodbyes and COVID-19 are present. “I have my good moments and my bad moments because my daughter is in this senior class,” Taylor said. “This is her class and a class that I have followed since the very beginning. These are kids that I have known from birth and I have known their parents since forever.”

“Every year for me is bittersweet and I try not to say good,” Taylor said. “I try to say ‘see you later,’ but this class was not going to have a prom and I wasn’t going to get to see them on their last day. It hit me like a ton of bricks.”

Graduation ceremonies for West Feliciana High School will be held at 9 a.m. July 10 at 9 a.m. at the West Feliciana High School Stadium. Safety precautions will be put in place that include spacing guidelines for graduates and guests. Each graduate can invite up to four guests and will receive tickets for those guests. Seniors must be on the track no later than 8:30 a.m. for the graduation exercises.