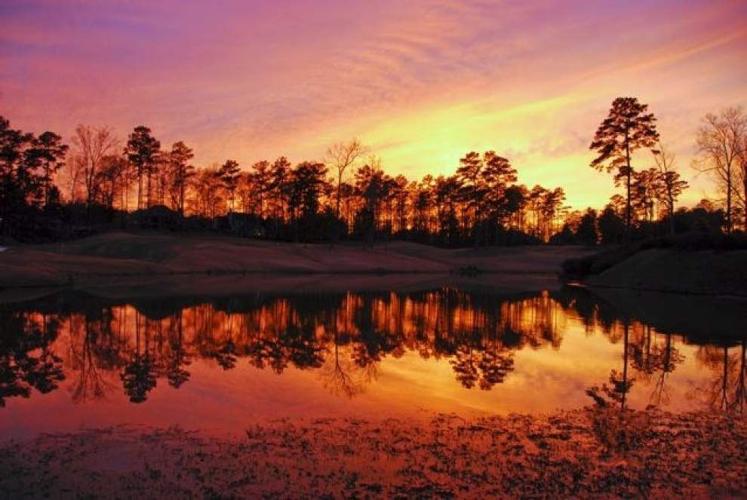 Photo provided by The Bluffs Country Club and Resort The Bluffs was ranked the No. 2 course in Louisiana by Golf Digest. 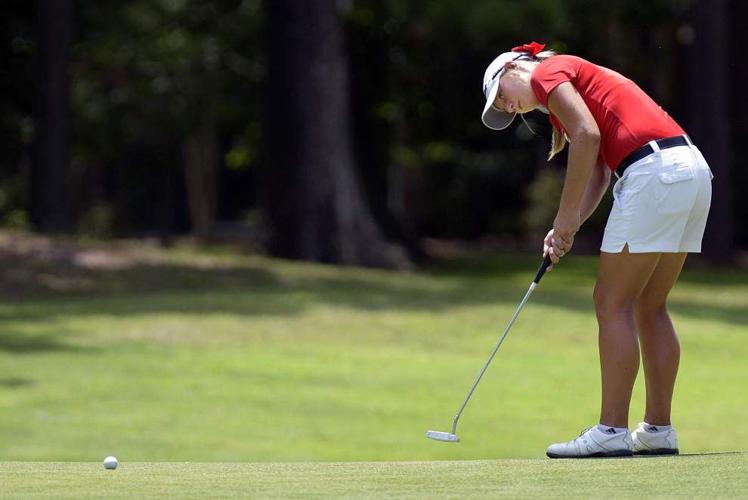 Advocate file photo by BILL FEIG -- Bailey Tardy watches her putt roll toward the cup on the 16th green during the American Junior Golf Association Arrowhead tournament at The Bluffs Golf Resort in St. Francisville. 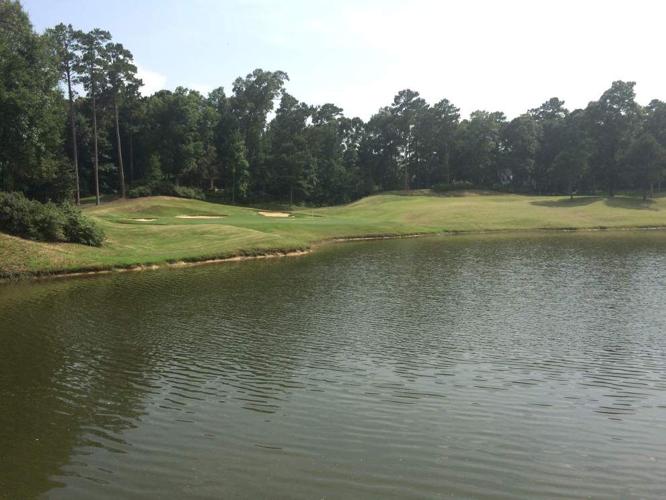 Advocate photo by Howard Arceneaux -- The picturesque green at the end of the 531-yard par 5 ninth hole at The Bluffs highlights the courses natural beauty. 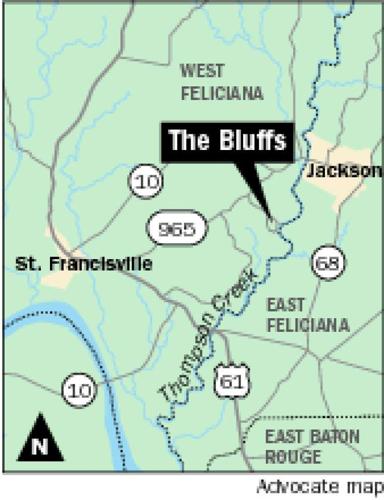 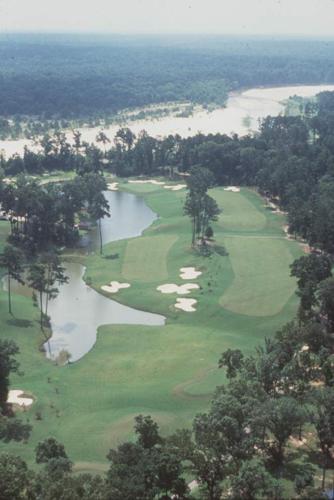 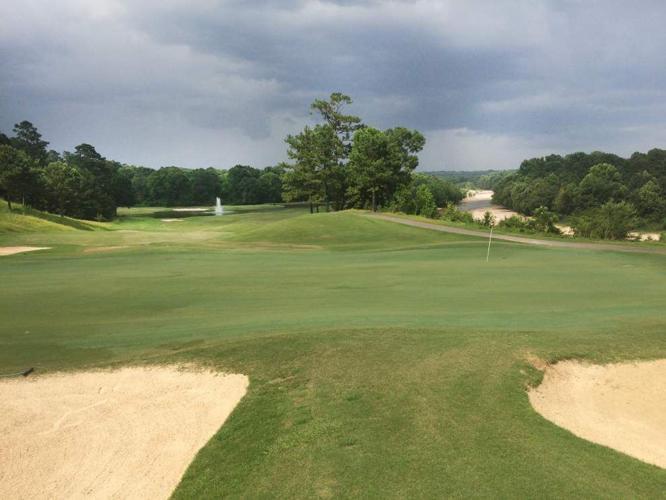 Advocate photo by Howard Arceneaux -- The 526-yard par 5 18thhole hugs the natural contours of Thompson Creek and provides a challenging finish to a round of golf.

Photo provided by The Bluffs Country Club and Resort The Bluffs was ranked the No. 2 course in Louisiana by Golf Digest.

Advocate file photo by BILL FEIG -- Bailey Tardy watches her putt roll toward the cup on the 16th green during the American Junior Golf Association Arrowhead tournament at The Bluffs Golf Resort in St. Francisville.

Advocate photo by Howard Arceneaux -- The picturesque green at the end of the 531-yard par 5 ninth hole at The Bluffs highlights the courses natural beauty.

Advocate photo by Howard Arceneaux -- The 526-yard par 5 18thhole hugs the natural contours of Thompson Creek and provides a challenging finish to a round of golf.

ST. FRANCISVILLE — Since it opened in 1988, The Bluffs Golf Resort’s 18-hole course, which meanders along a 60-foot bluff overlooking Thompson Creek and through the same West Feliciana Parish backwoods where naturalist John James Audubon once explored, has hosted numerous amateur and professional tournaments.

But there’s trouble in this golfer’s paradise — trouble over a disputed tax bill.

An allegation has surfaced that the Louisiana Tax Commission’s administrator authorized a falsified public record claiming the parish assessor admitted he had overvalued the property when, in fact, Assessor Randy Ritchie had made no such statement.

That allegation has sparked an investigation by the District Attorney’s Office into that document, and the Louisiana Legislative Auditor’s Office is examining why the tax dispute ended up before the Tax Commission before playing out on the parish level.

The Bluffs, owned by Bluffs Air LLC, currently has an unpaid 2014 tax bill of $60,325. Another tax bill, for $12,331, was paid on the clubhouse, which is a separate taxable parcel from the golf course. The residential real estate that surrounds the course is not connected to the golf facilities.

The tax dispute has been simmering since the 2012 valuation, with the Assessor’s Office basing its appraisals of the Arnold Palmer-designed golf course on the highest valuation, one used for championship courses. The Tax Commission sought an appraisal based on a lower valuation after it had certified the 2014 tax rolls.

The deadline for filing a formal protest with the Assessor’s Office on the 2014 valuation was September of that year, but no written protest was ever submitted, said Ritchie and Deputy Assessor Richard Kendrick, despite a brief meeting in which Ritchie advised The Bluffs’ managing partner, Clyde Dubois, to have the company get its own appraisal.

Dubois says the golf course is sound financially. The central issue, he says, is the amount of the disputed tax bill.

“We are capable of paying the tax, but this a protest over the tax bill,” he said.

That protest, however, has taken some unusual twists and turns.

On June 10, the tax liability went to a sheriff’s sale — in which the purchaser of the liability, not the property, can later recoup the taxes along with the interest and penalties, or after three years file suit to take ownership of the property if the taxes still have not been paid. But no one made an offer at the sheriff’s sale.

So now there’s a tax lien on the golf course, which remains in the control of the owners. If they sell it, however, the tax liens must be paid.

And the property is for sale.

Donnie Jarreau Real Estate Inc. in Baton Rouge is listing the golf course at $6.5 million and the clubhouse at $3 million. Listing agent Alex Knight said the property has been on the market for a while.

Bluffs Air LLC acquired both the golf course and the clubhouse property in 2009 for $4.8 million from the previous owner, James Tanner.

Three or four months ago, the Tax Commission’s staff got involved in the valuation dispute when Bluffs Air representative Andrew Day contacted commission staff administrator Charles Abels, who then had his staff review the parish’s appraisal.

The Tax Commission has the authority to modify an assessor’s valuation. By its own rules, though, that can be done only through a change order submitted by an assessor or through an appeal by the property owner.

The Tax Commission also can nullify a tax sale but, by law, only if the assessor provides a notarized affidavit supporting the nullification.

Abels said the Tax Commission staff decided to change the assessed value from $753,400 to $539,600, a figure listed on the West Feliciana assessor’s website.

Kendrick, the parish’s deputy assessor, said the lower valuation listed on their website is a working number for 2015, not 2014, and has not yet been finalized.

Abels said his staff also conducted a separate appraisal in which they compared The Bluffs to other Baton Rouge-area golf courses such as Pelican Point, Copper Mill and Country Club of Louisiana.

But the Tax Commission staff did not notify the parish Assessor’s Office that they were about to embark on a new valuation.

The Assessor’s Office learned of it only after a Tax Commission appraiser contacted it on June 8 to set up a meeting to discuss their findings.

But on June 16, the Tax Commission, without input from the Assessor’s Office but acting on an affidavit prepared by its own staff, annulled the parish’s June 10 tax sale — a symbolic act, given that no bid was made at that sale. Had one been made, the money would have been returned to the bidder.

Kendrick said the Assessor’s Office had no idea the commission would be taking up that matter, noting the wording on the agenda item was vague.

The Assessor’s Office learned of the nullification on June 18, when the Tax Commission formally notified the assessor by mail.

Meanwhile, on June 15, the day before the Tax Commission nullified the sheriff’s sale, the Assessor’s Office by happenstance learned while looking up paperwork in an unrelated case that the commission staff had prepared a change order to lower the value of the golf course, Kendricks said.

The change order was on the agenda for the commission’s June 23 meeting, and at that point, the Assessor’s Office was prepared to make its case.

At that meeting, Abels, the Tax Commission administrator, tried to get the commission’s board to reduce the taxable value of the golf course from $753,400 to $539,600.

But Ritchie told the commissioners he never sought to nullify the tax sale or to lower the assessed value of the property.

The subject of the DA’s investigation and the legislative auditor’s review is a document — an affidavit — that Abels authorized a commission employee to draw up. The affidavit, which should be a notarized oath by the assessor, says the parish assessor seeks a nullification of the tax sale because the golf course was overvalued. But Ritchie testified to the commission he never signed the affidavit.

Abels admitted it was he, not Ritchie, who authorized the affidavit. The affidavit is signed, “Approved by Charles Abels” and had been mistakenly filled out by a tax commission staffer, Abels said.

Tax Commission member Joey Vercher said, “If I had known there was not a notarized oath, I would not have signed it.”

Abels characterized it as a clerical error when later contacted by The Advocate.

Ritchie also testified he never authorized the change order, as required by Tax Commission protocol, to lower the assessment. He said Abels instructed the Tax Commission staff to prepare a change order — an act Ritchie says was done to circumvent his authority.

Abels, however, in an email to The Advocate, said state law gives the Tax Commission authority to issue change orders and to cancel tax sales.

But Brian Eddington, the attorney for the Parish Assessor’s Office, contends both processes have to start on the parish level, with the assessor.

According to the Louisiana Tax Commission website, in order to appeal to the commission, a taxpayer must start at the parish assessor’s office. If the property owner and assessor still disagree, the taxpayer can make a case to the parish board of review — in West Feliciana, that’s the Parish Council.

The board of review determines if any changes should be made. If either the assessor or the taxpayer is not satisfied, either may appeal to the state Tax Commission.

“This could have all been avoided if The Bluffs had talked to us directly or paid their taxes,” Kendrick said. “But there’s been no real communication with them, and they’ve provided us no information.”

Dubois, The Bluffs’ managing partner, said owner Claude Penn “made the decision to go this route” to the Tax Commission. Dubois would not say if the company plans to sue the parish to get its tax bill lowered, but he expects the situation to get worked out and said the company intends to pay its tax bill.

Parish President Kevin Couhig, Ritchie, Eddington and other officials met with representatives of the Legislative Auditor’s Office on June 22 to discuss the matter.

“It was obvious that the commission’s administrator in this process misled both the Tax Commission itself and the West Feliciana assessor,” Couhig said.

Legislative Auditor Daryl G. Purpera said his office is looking at the process that was followed and at the documents submitted to the Tax Commission.

And as for the unpaid tax bill, the parish has two choices: Wait for Bluffs Air to pay the bill or, after three years, pursue legal ownership, the district attorney said.

“All the rightful owner has to do is pay the taxes on it,” D’Aquilla said. “The system is designed to protect the property owner’s rights.”