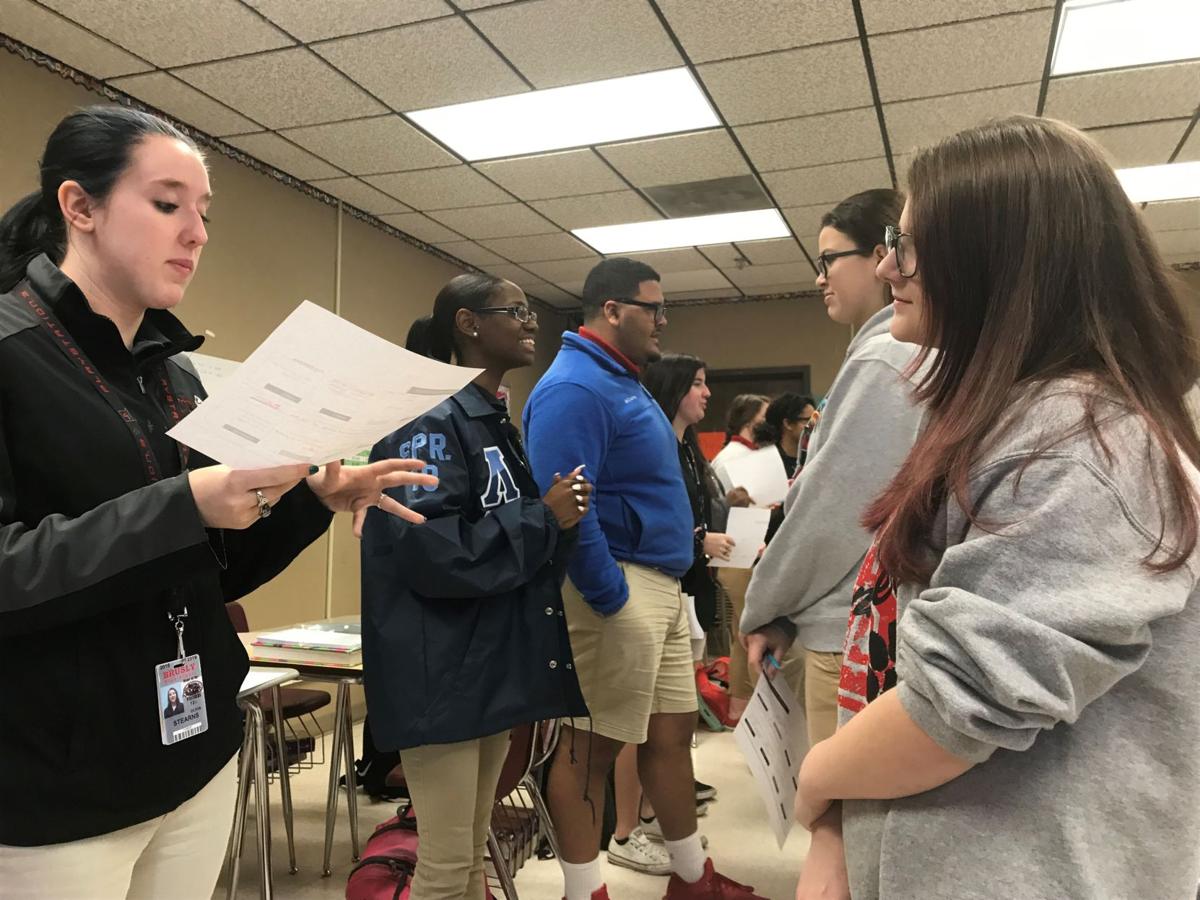 Olivia Stearns, a Brusly High School senior, practices pitching an idea to an investor in the school's Educators Rising class in March 2019. The class aims to funnel students into education degrees to address the state's teacher shortage. 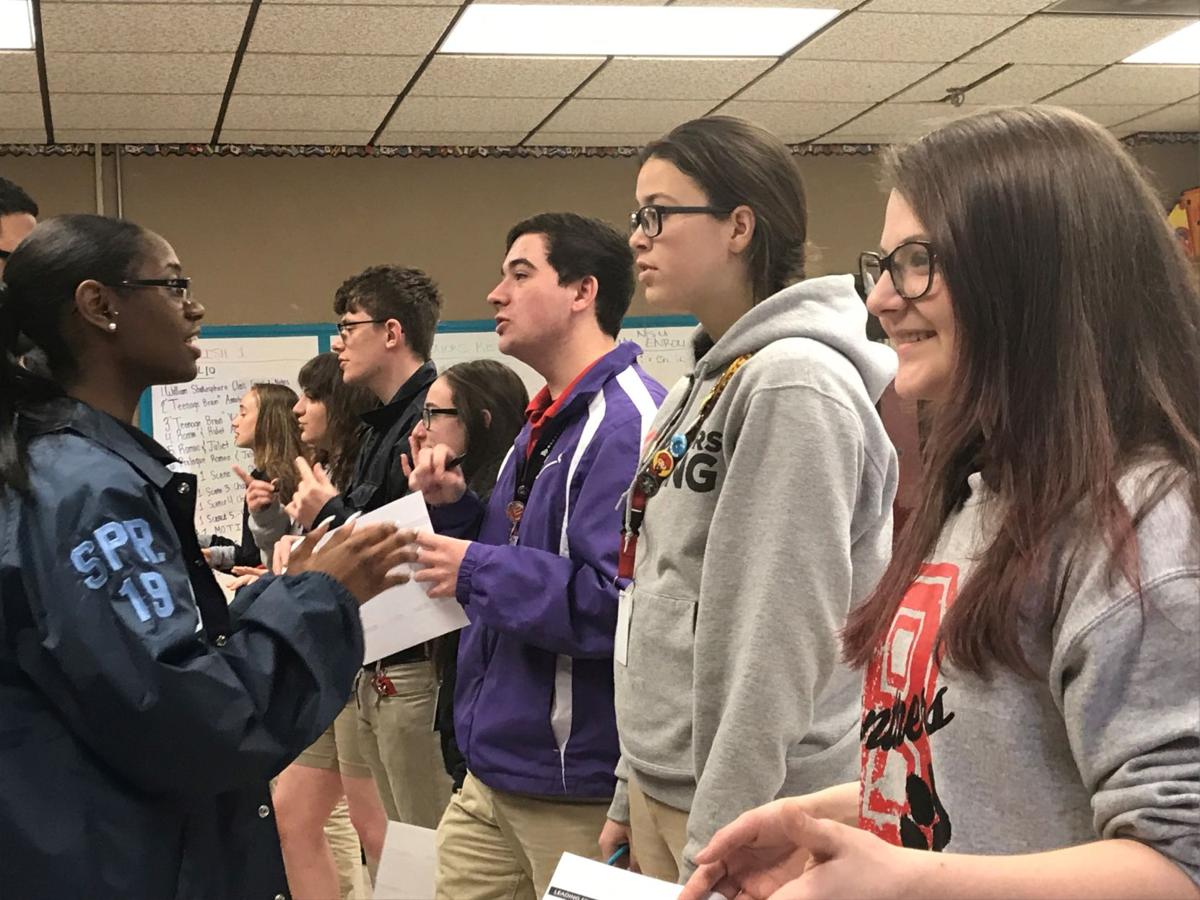 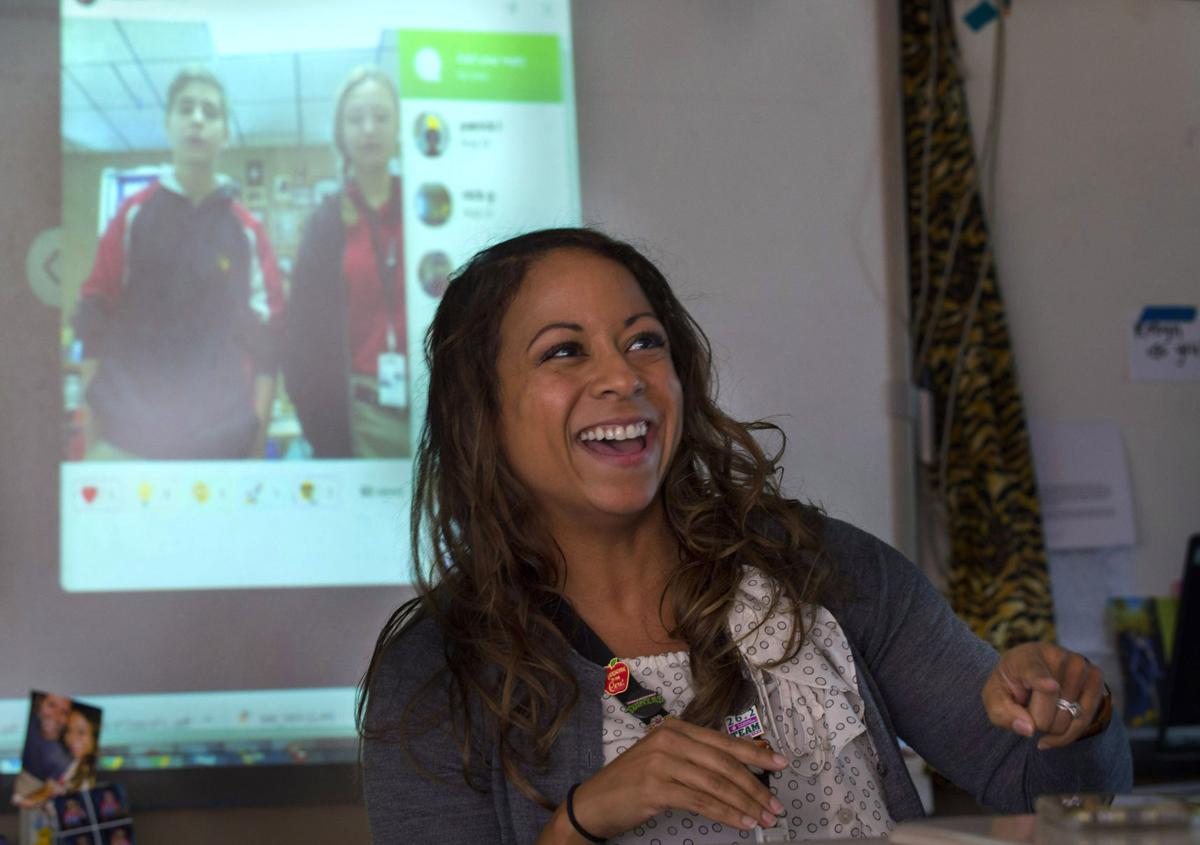 Brsusy High School ninth grade English teacher Kimberly Eckert talks about her teaching and being named state teacher of the year, Thursday, Aug. 24, 2017. A photo in background is from a speaking/listening project that utilized teams, which play an important role in her approach.

Olivia Stearns, a Brusly High School senior, practices pitching an idea to an investor in the school's Educators Rising class in March 2019. The class aims to funnel students into education degrees to address the state's teacher shortage.

Brsusy High School ninth grade English teacher Kimberly Eckert talks about her teaching and being named state teacher of the year, Thursday, Aug. 24, 2017. A photo in background is from a speaking/listening project that utilized teams, which play an important role in her approach.

A high school class crafted to solve Louisiana's teacher shortage is touting success in its first year, as five West Baton Rouge Parish seniors are about to graduate with sights set on a future in the classroom.

The seniors — three from Brusly High and two from Port Allen — are part of a course called Educators Rising that aims to identify potential educators and hone their skills in high school to funnel them into college studies.

Educators Rising has been implemented in other districts across the country, but Brusly High teacher Kim Eckert brought the curriculum to Louisiana for the first time for a class at Brusly in 2018-19. She did so in expanding on her former Teacher of the Year platform of addressing the state's teacher shortage.

The Brusly students taking the class range from sophomores to seniors, and tackle an array of elements relating to education, including creating classroom culture, anti-bias instruction, teaching standards, policies and ethics in the hope it produces well-rounded graduates even if they don’t come back to the classroom after college.

The same program runs as an extra-curricular club in Port Allen, but won't become a class until the 2019-2020 school year.

Eckert was the first winner of the state’s Department of Education fellowship in 2018 that provided $50,000 to pursue education initiatives. The district used that funding to lessen Eckert’s workload with a part-time teacher, enabling her to take on the first class of students for Educators Rising in the 2018-19 school year.

This fall, the West Baton Rouge Parish School District will become the first district in the state to launch a national curriculum-based progr…

“We need to plant those seeds because they may end up being paraprofessionals and come back (to teaching) the long way, or go to community college and come back the long way," Eckert said. "We can’t afford to lose any awesome kids who would make great teachers because of what we think that mold looks like. Clearly that’s not working for us.”

West Baton Rouge School Superintendent Wes Watts said Eckert's work has tapped into a critical shortfall in college recruitment for teachers, as many students don't even consider teaching as an option because they rarely know what it truly involves.

“We do a great job of encouraging kids to go into engineering, the medical field, these skilled trades, we promote every profession but our own,” Watts said. “(The class) is bringing out their very best, communication skills, confidence, they’re going to be better no matter what they end up doing.”

In a recent Educators Rising class at Brusly, the energetic group of teens brainstormed how to best pitch their ideas to potential investors. They’ve been working on a concept called "Genius Hour" in which each student has a project they’ve developed to combat a shortfall in the education system.

One student wanted to ensure physical education curriculum was standard across jurisdictions, modeled after a national exercise standard. Another wanted to push for American Sign Language to be offered as a language in schools in addition to the usual French or Spanish.

A Brusly English educator who is outgoing state Teacher of the Year has landed the state's first $50,000 fellowship to pursue education initiatives.

“You have to see yourself in a role where you’re not just a kid in a class but you’re the one who can make a change,” Eckert told the students, before thrusting them into a role-play scenario, giving them each 30 seconds, then 15, then seven to pitch their idea.

Junior Kennedi Hudson talked through her idea about offering cultural studies in schools, taking in advice from her peers huddled around her.

The idea formed surrounding African American culture, but could be implemented on a wider scale, she said.

“If you can get students aware of and interested in different cultures, that will help with classroom behavior and management,” she told her partner during her pitch.

Some of the students taking the class don’t want to become teachers, and already know the path they will take instead.

One student wants to become an EMT and another a criminal justice professional, but Eckert said it’s important to not just churn out more teachers but to elevate the profession’s status within other sectors of the community.

Those kids will go on to become policymakers, parents and professionals who can one day help change the face of education, Eckert said.

Eckert spends a lot of her work day talking to other school districts, universities and community colleges to promote the Educators Rising program and create funnels from schools into teaching programs. The next step is securing dual credit for the high school class, and fostering high school students who want to bring their new education degree back to local schools.

“A lot of what we do in this class is make very clear we’re not just recruiting any teachers, we’re recruiting where the shortages are,” she said. “We’re recruiting rural, urban, we need people in special education, in STEM, middle school. … And the kids who never saw themselves as yet another teacher in a suburban elementary school now see themselves in these types of classrooms.”

Fixing the flow of teaching graduates from high school to college and back again is not something that will happen overnight, but in one year in one school Eckert has secured five new education degree students. And that, she says, is a good place to start.