The family of a Port Allen man shot by a West Baton Rouge sheriff's deputy during a July narcotics operation argues in lawsuit filed in federal court that it was unjustified because he was surrendering when the deputy pulled the trigger.

Lawyers representing Josef Richardson's family wrote in a civil complaint filed Tuesday in U.S. District Court that he was unarmed and in his underwear when law officers burst into the Budget 7 Motel near Port Allen on July 25 while executing a "no-knock" warrant.

While serving the warrant, deputy Vance Matranga Jr. fired his gun and struck Richardson, 38, in the back of the neck.

An autopsy found Richardson died at the scene after suffering a single bullet wound that severed a vital area of his spine.

They seek monetary and punitive damages against West Baton Rouge Parish Sheriff's Office, Sheriff Mike Cazes, Matranga and Deputy Brett Cavalier — the deputy who was also part of the narcotics team that entered Richardson’s room. All are named defendants in the lawsuit. 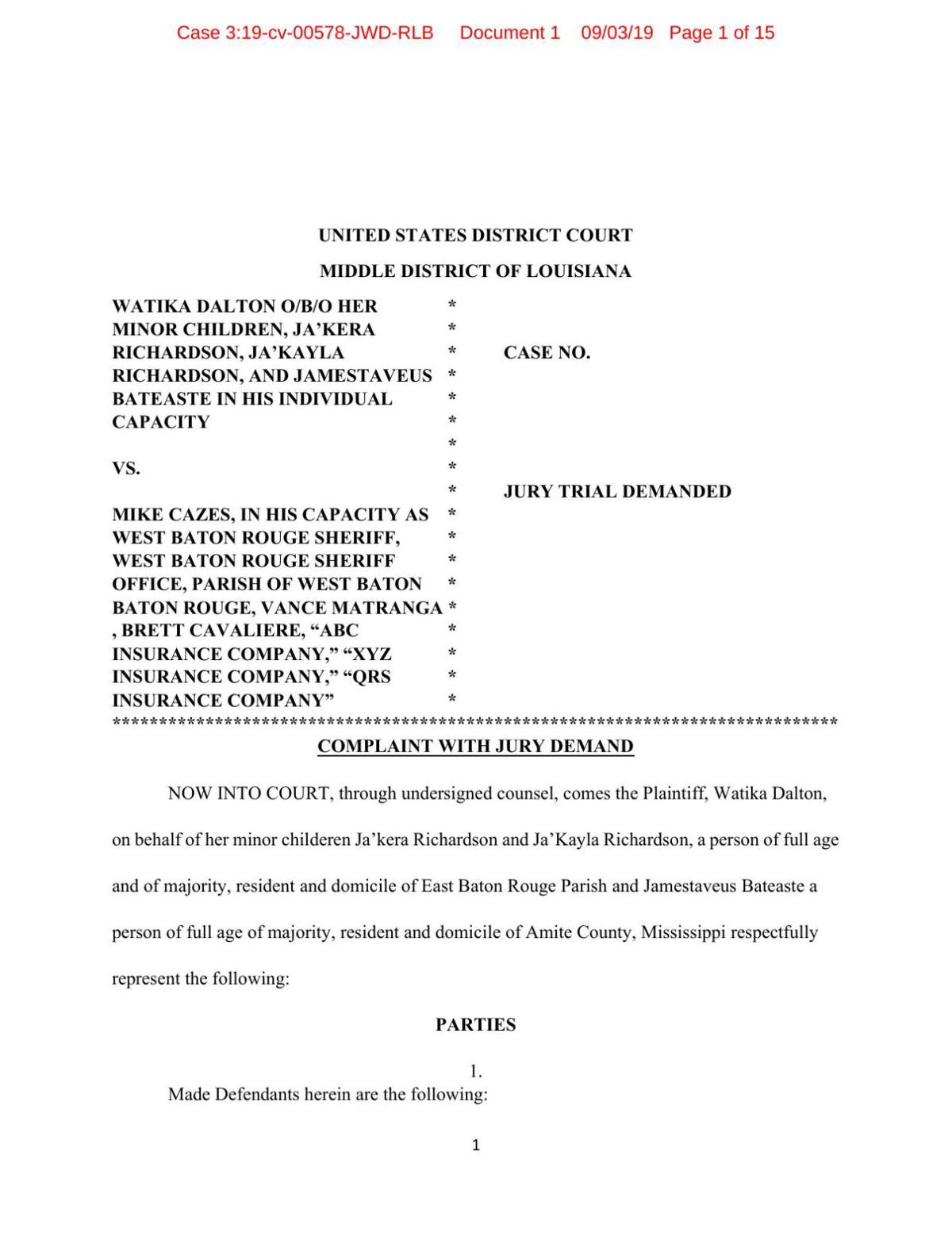 Richardson's death has sparked a handful of peaceful demonstrations in Port Allen, as family, local and national activists have pressed for answers about the shooting.

“This community is suffering, and the only way to heal this is with transparency and accountability,” said the family’s attorney, Ben Crump, during a Wednesday afternoon news conference in Port Allen. “If this is a bad shooting, the shooter needs to be held accountable.”

Crump, a national civil rights lawyer, has been involved in a number of high-profile police shooting cases and represented the family of Trayvon Martin, the Florida teenager whose death cast a national spotlight on racial profiling.

The family of Josef Richardson, the Port Allen man fatally shot by a West Baton Rouge deputy, called on the U.S. Department of Justice to inve…

Richardson's girlfriend, Jessica Cloutare, 39, was in the room and saw a deputy point his gun at Richardson's head and fire shortly after they entered the room, according to the lawsuit.

She was arrested that night on suspicion of several drug-sale charges.

A narcotics task force detective got a tip that an informant had bought drugs from someone at the room, according to information contained in a search warrant. A district judge signed the "no-knock" warrant, which is a legal tool that allows deputies to immediately enter buildings without announcing themselves.

State Police are investigating the shooting and plan to forward their findings to the local district attorney's office, but no timetable has been set on when the agency expects to complete its review.

Richardson's family has asked for a federal investigation into his death after raising questions about the relationship between State Police and local agencies and whether they can impartially investigate.

Matranga has been on paid leave since the evening of the shooting.

Records show he has been with the sheriff's office since 2011. He received extensive firearms training and served as a gun safety instructor, as well as a member of the narcotics team that went to Richardson's motel.

“This man was well-trained. He even trained other people in gun safety,” said Richardson's mother, Maudess Sandra Douglas. “Now how is his gun going to discharge like that?”

The sheriff’s office said it will conduct its own review to see if Matranga or other deputies violated any department rules.

Lawyers also questioned whether Matranga’s gun had been modified to have a lighter trigger weight, making it easier to fire with less pressure, speculating that this might have caused his gun to fire accidentally.

“We don’t know if the gun was altered or not,” Crump said. But he said the lawsuit gives the family’s legal team the ability potentially inspect the gun and see for themselves.

Louisiana State Police seized Matranga’s gun the night of the shooting but declined to comment Wednesday on the defense team's claims that it may have been altered.

A state police spokesman pointed to an earlier statement that the agency made: “There is no room for error when we are working to gather all of the facts. The premature release of information can in fact affect the totality of the investigation.”

West Baton Rouge Sheriff’s Office Spokesman Sgt. Dale Simoneaux said he wasn’t aware of any past cases when a deputy modified their weapon.

Internal policy rules forbid law officers from modifying their guns and requires that they be submitted to firearms instructors for regular inspections, including each time they go to the firing range. In Matranga’s case, other instructors would have checked it.

“It’s hard to say how many times his weapon would have been inspected,” Simoneaux said.