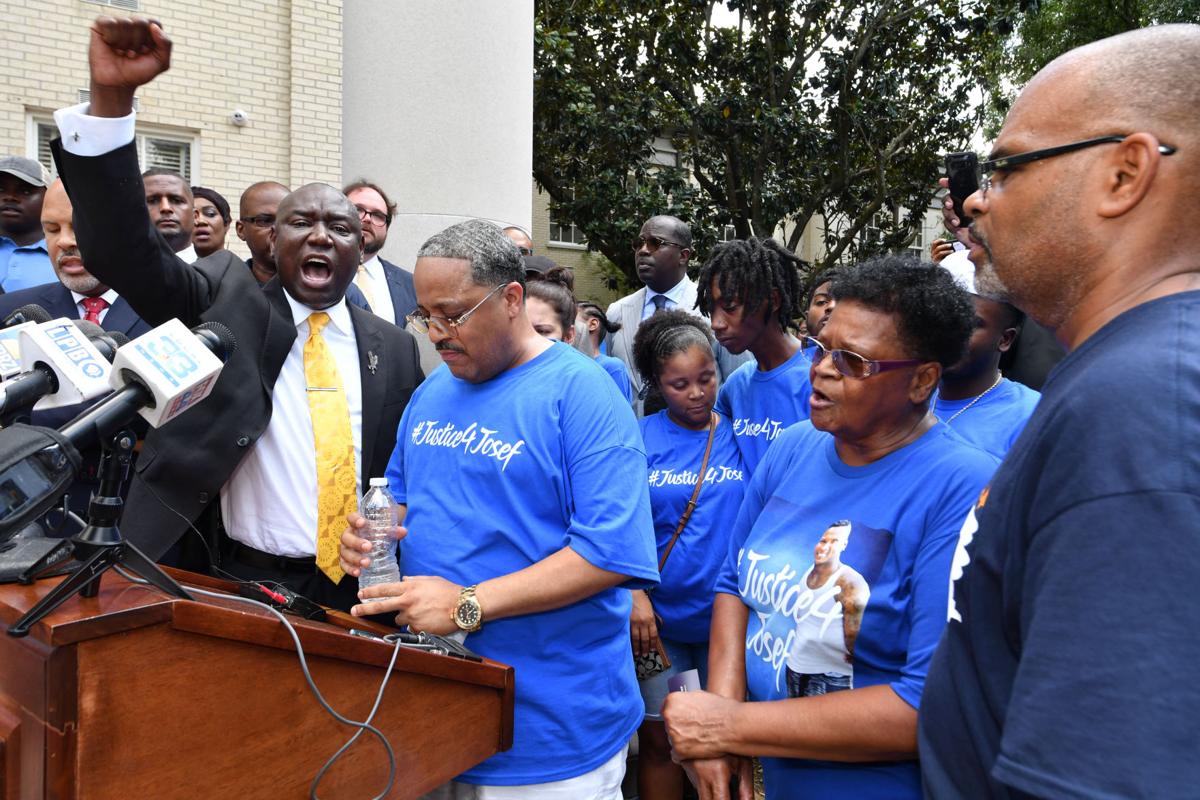 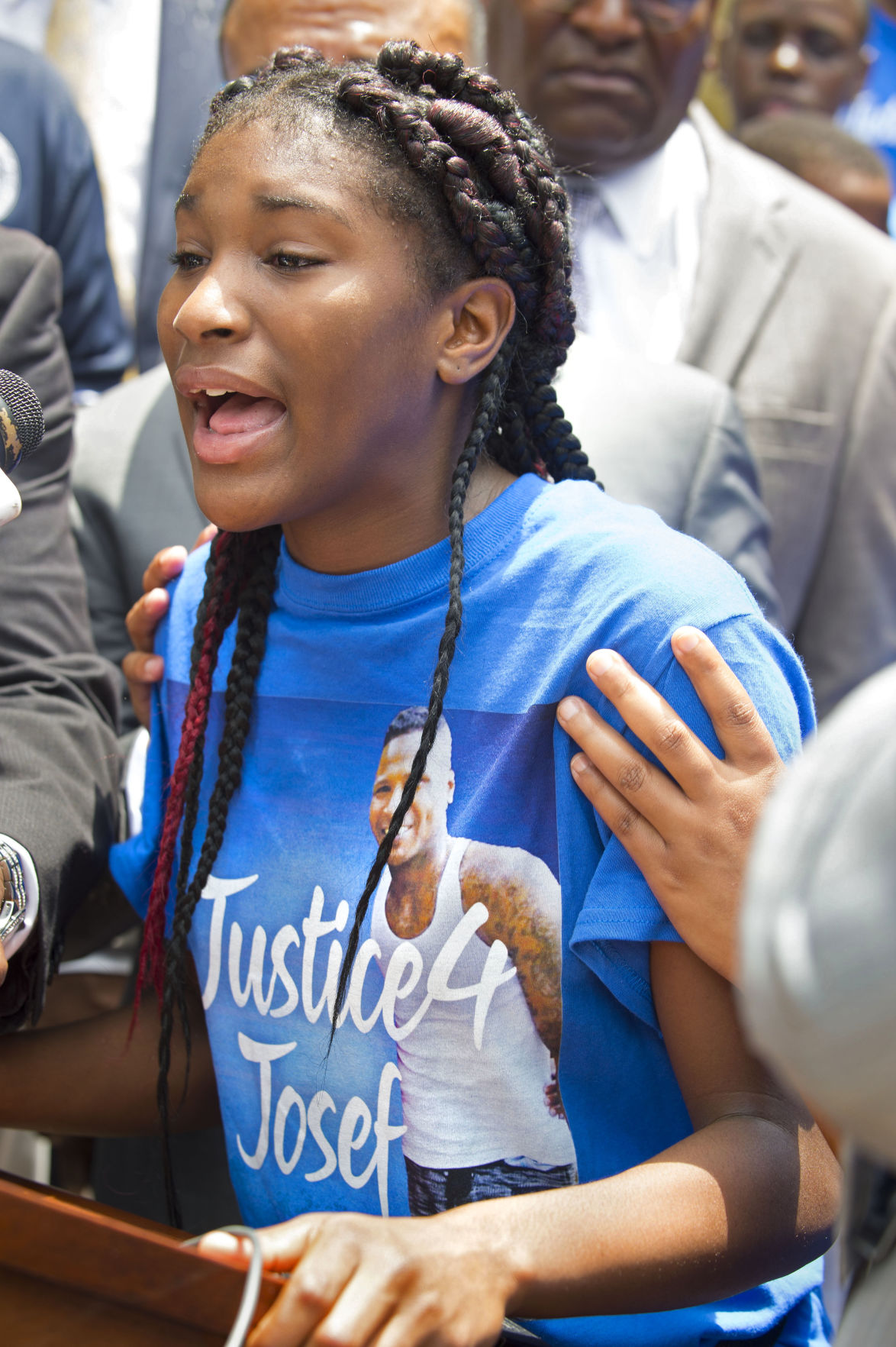 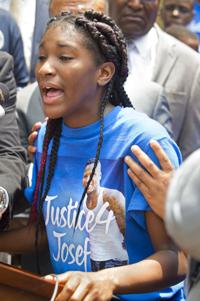 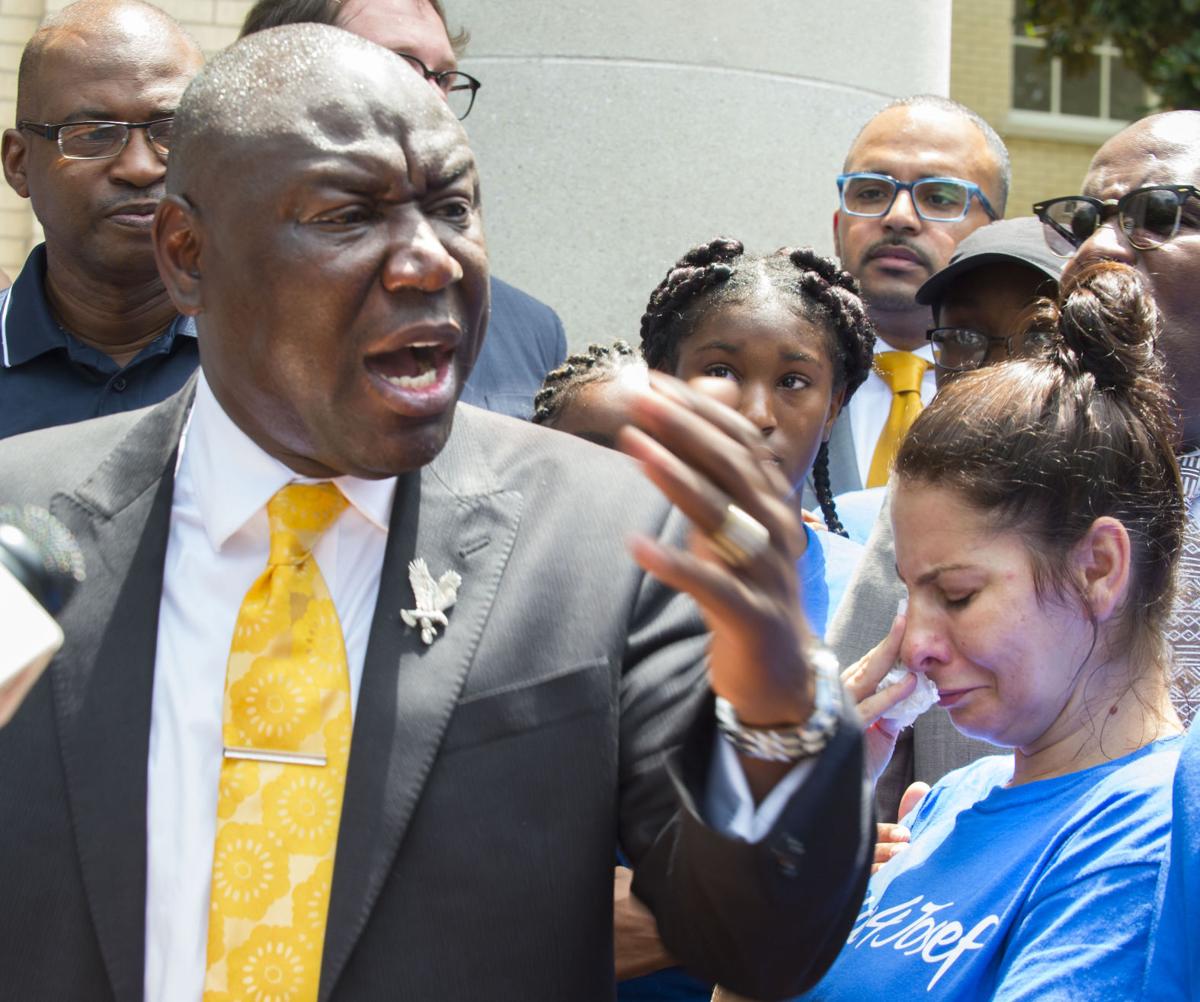 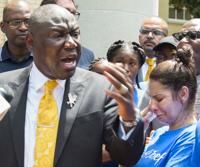 Jessica Ellen Clouatre, 39, right, cries as civil rights attorney Benjamin Crump, left, speaks at a rally Wednesday, July 31, 2019 outside the West Baton Rouge Parish Courthouse, where family, friends attorneys and civil rights leaders gathered to demand that more information about the fatal shooting last week of her boyfriend, Port Allen's Josef Richardson, 38, by a WBR Sheriff's deputy be released. Clouatre was in the Budget 7 Motel room with Richardson, when he was shot.

Jessica Ellen Clouatre, 39, right, cries as civil rights attorney Benjamin Crump, left, speaks at a rally Wednesday, July 31, 2019 outside the West Baton Rouge Parish Courthouse, where family, friends attorneys and civil rights leaders gathered to demand that more information about the fatal shooting last week of her boyfriend, Port Allen's Josef Richardson, 38, by a WBR Sheriff's deputy be released. Clouatre was in the Budget 7 Motel room with Richardson, when he was shot.

Ja'Kera Richardson fought through tears speaking before a crowd of about 200 people gathered in front of the West Baton Rouge courthouse Wednesday afternoon to demand answers into her father's death.

Her father, 38-year-old Josef Richardson, was fatally shot in the back of the neck last Thursday while West Baton Rouge sheriff deputies were serving a warrant at the motel. But authorities have offered few details about why the deputy shot him.

"I don't want anybody to stop fighting," said Richardson, 13. "If you think this shouldn't be right, then keep fighting for it."

Wednesday's demonstration comes a day after the release of an autopsy that found Richardson suffered a single gunshot wound that pierced his neck, severed a vital area of his spinal cord and severely damaged the base of his skull.

Many in the crowd wore blue shirts that read "justice4josef" and chanted "no justice no peace" and "a bullet to the back of the head, what else needs to be said?"

Benjamin Crump, a prominent civil rights attorney who has worked on multiple high-profile police shooting cases, is representing Richardson's family. He called for immediate answers from authorities, and vowed to return next month if no action is taken.

"What we want is transparency," Crump said. "And most importantly, we're demanding the truth."

Ronald Haley Jr., a Baton Rouge attorney also representing the family, exhorted the group to take their frustrations to the voting booth in October if their demands aren't met.

His statement was met by chants from the crowd. "Vote them out!" they yelled.

The Louisiana State Police is investigating the shooting and plans to forward its findings to the district attorney's office.

In a statement following the rally, State Police urged the public to be patient as it continues to investigate, a process that can in past police shootings can take months to conclude.

"There is no room for error when we are working to gather all of the facts," State Police said. "The premature release of information can in fact affect the totality of the investigation."

A spokesman for the West Baton Rouge Sheriff's Office said the agency recused itself from the investigation after it happened. The department declined to name the deputy after he reportedly received death threats, though the department hasn't officially released his name.

Details of the warrant deputy's had been serving for have also not been made public, though an arrest warrant of Richardson's girlfriend, 39-year-old Jessica Ellen Clouatre, suggests it may have been a drug-related operation.

Deputies wrote in an arrest report charging her with a handful of drug-related offenses that she was in the motel room when Richardson was shot. Those documents do not reference the shooting or say if authorities recovered a weapon.

A Port Allen man shot Thursday by a West Baton Rouge Parish sheriff's deputy was killed by a single bullet to the back of his neck, according …

Ja'Kera Richardson echoed statements her family has made about her father and acknowledged that he's has past legal troubles.

Records show he's had a handful of drug-related convictions, and was sentenced to five years in prison in following a 2012 conviction for selling marijuana.

But she and other family stressed that he wasn't a violent person and that the shooting should have been avoided.

“I don’t want it to be a problem that nobody can fix," she said. "How many more black people have to cry every night because their family member is gone?"