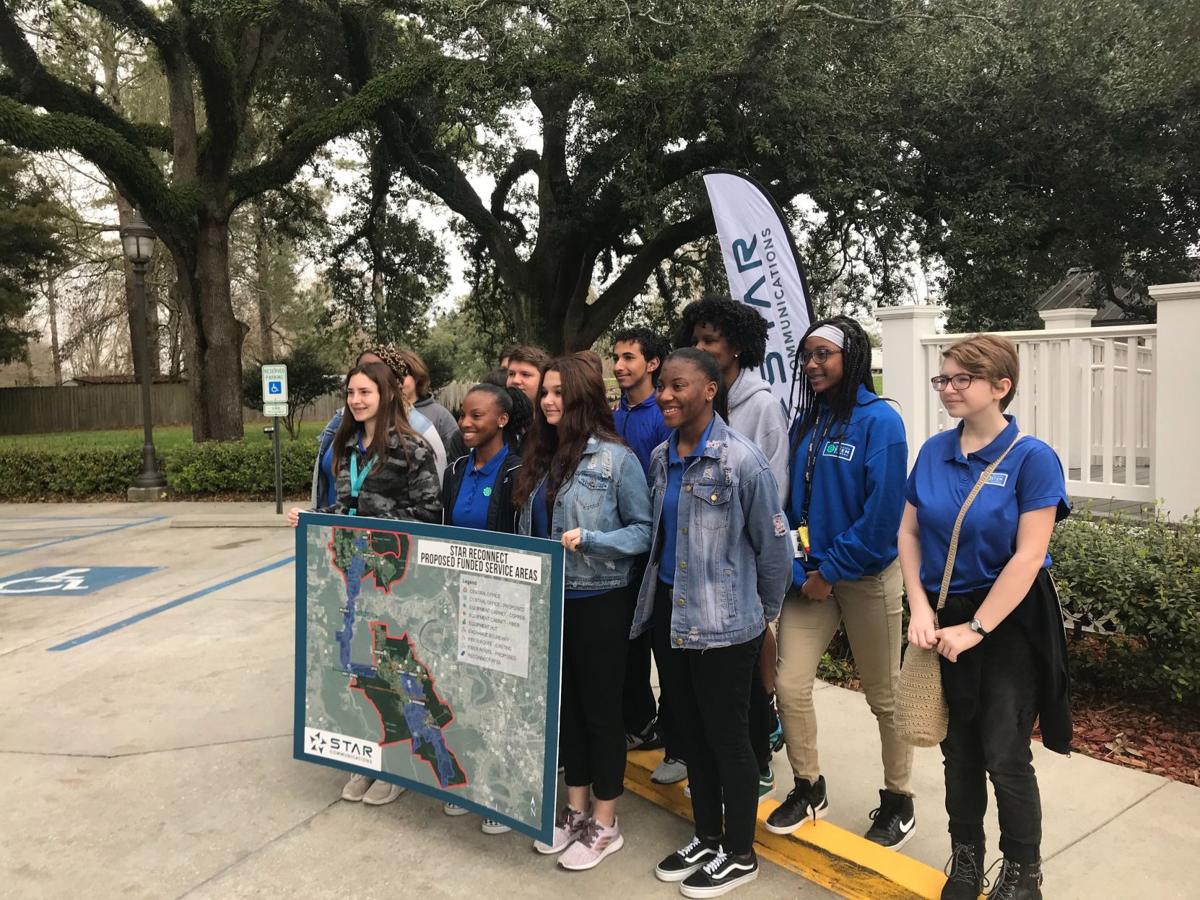 Students from the Iberville STEM Academy hold up a map of areas that will see high-speed internet installed as part of a $15.5 million broadband expansion effort. 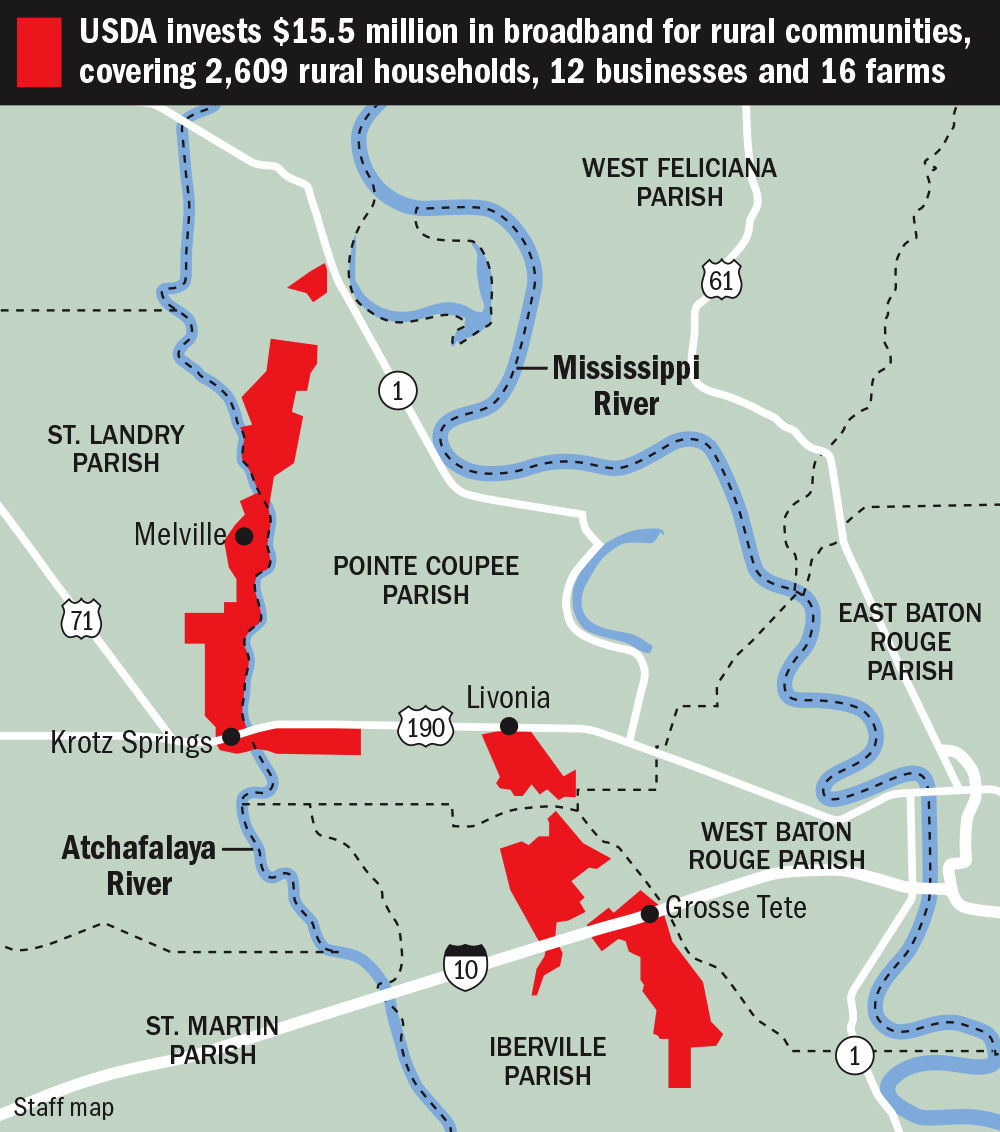 Students from the Iberville STEM Academy hold up a map of areas that will see high-speed internet installed as part of a $15.5 million broadband expansion effort.

GROSSE TETE — In an effort to bridge a gap in internet speeds between rural and urban communities, federal officials on Tuesday announced a $15.5 million project to expand high-speed connections in rural parishes west of Baton Rouge.

The project will roll out more than 200 miles of fiber optic cable to help 2,609 homes, 12 businesses, and 16 farms in Iberville, St. Landry and Pointe Coupee parishes reach faster speeds, according to the U.S. Department of Agriculture.

It's the latest push in a wider effort to bridge disparities between urban centers and rural areas, which have few — if any — options for fast internet. Observers say cripplingly slow speeds have left residents, businesses, hospitals and schools unable to meet modern demands in an increasingly digital world.

“When students can do their homework at home and not at a McDonald’s, it’s worth it,” said Leslie Durham, the governor’s designee to the Delta Regional Authority during a Tuesday morning event announcing the project in Grosse Tete.

Maringouin-based Star Communications Inc. will receive a $7.7 million grant and matching loan from the federal government.

Tim May, the company’s CEO, said he expects the entire project will take about five years to complete. The company plans to begin as early as this summer.

Once finished, customers will have a handful of packages to choose from ranging from $40 to $100 per month for internet speeds that match what customers in Baton Rouge and New Orleans enjoy.

"That's something we worry about, the urban versus rural digital divide," May said. "We want to pare that so that you can go to Baton Rouge and get the same gig speeds and go over to Grosse Tete and get the same."

People in rural parishes often rely on their cell phones or satellite internet service, which is far slower and less reliable than cable or fiber optic internet.

About 494,000 rural Louisiana residents don’t have access to an internet connection that's needed to efficiently run devices for web-browsing, emails and other basic uses, according to consumer website BroadbandNow.

"USDA is committed to this strong partnership with rural communities in deploying this critical infrastructure," said Roy Hollemon, the USDA's rural development director for Louisiana. "We know when rural America thrives, all of America thrives."

In Iberville and St. Landry parishes, about 85% of people have access to those necessary speeds, despite only being a few miles from parishes with faster internet.

That's compared to more than 98% of residents of Baton Rouge, New Orleans and the suburban parishes between them, according to BroadBandNow. Lafayette also had roughly 98% connectivity to fast speeds.

The school has increasingly put a focus on computerized assignments. But at times Williams has to stop and restart her internet router then wait several minutes for her work to buffer at her home in Maringouin, which is among the communities getting a speed boost.

Other times, she and her classmates have to find a library or use the hotspot from their phones. “It’s real aggravating,” Williams said.

Hospitals and medical facilities have also begun offering services for rural patients to video chat with doctors, which often spares them from making a long trip. Farmers have increasingly begun to use more technology in recent years that rely on strong internet connections for things like soil sensors and even autonomous tractors.

Grosse Tete Mayor Michael Chauffe said internet speeds is often a sticking point for businesses in developers who want to build there. The antiquated copper lines that connect homes and businesses in town are slow and sometimes unreliable.

With the prospect of faster speeds, the mayor said that could give residential and business development a jolt in the near future.

“The old saying goes: ‘If you build it, they will come,'” he said. “Now we can say we have high-speed, optic internet.”

I have a cousin, Anders, who runs a dairy with his iPhone.