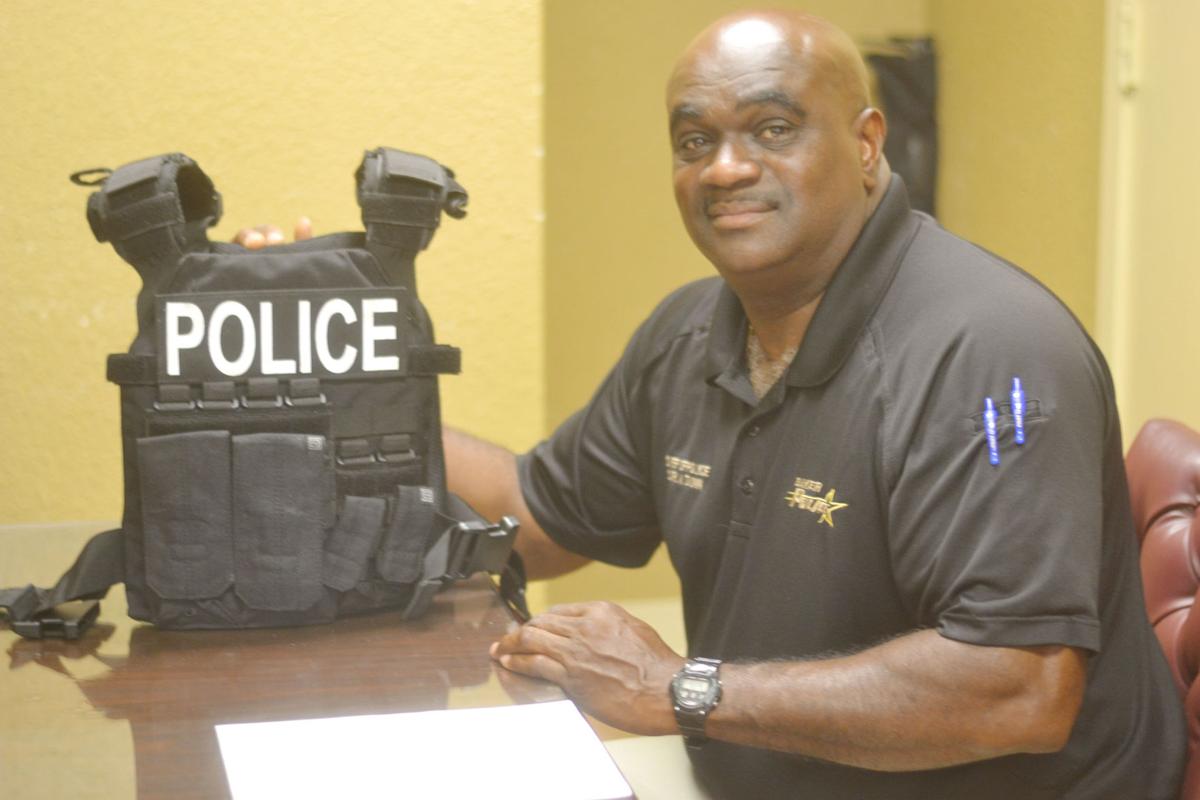 Baker Police Chief Carl Dunn explains the benefits and features of the Angel Armor equipment July 23, 2019. The advanced body armor was donated to the department from the Capital Area Law Enforcement Foundation. 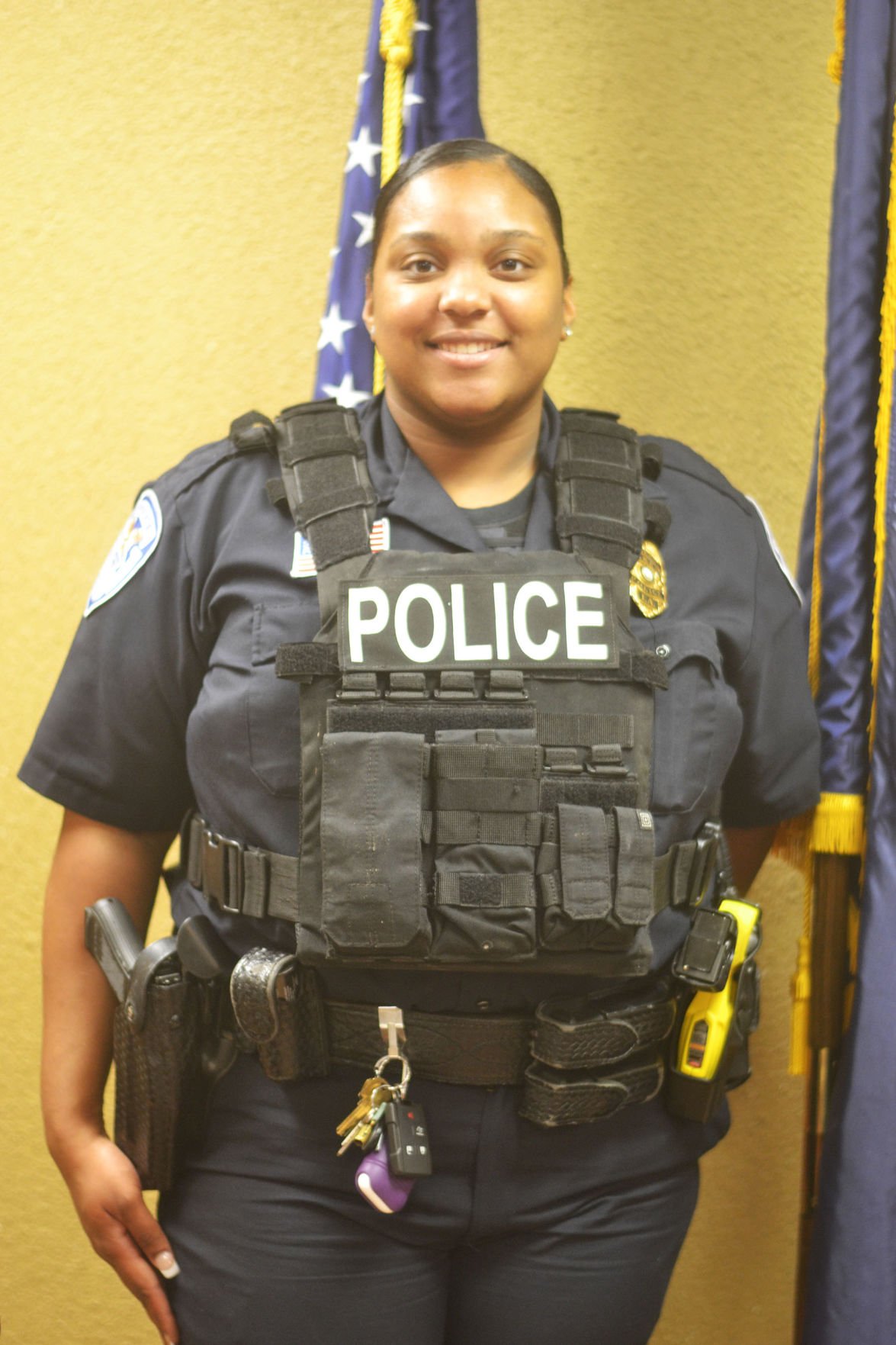 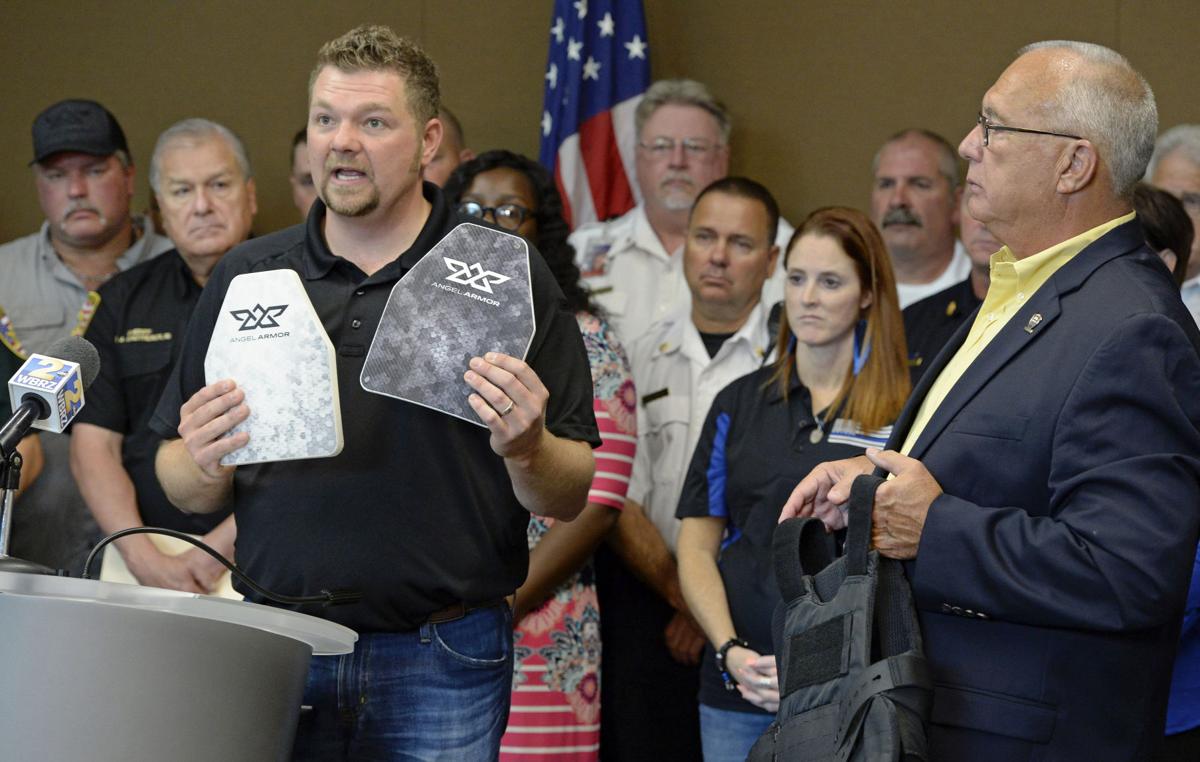 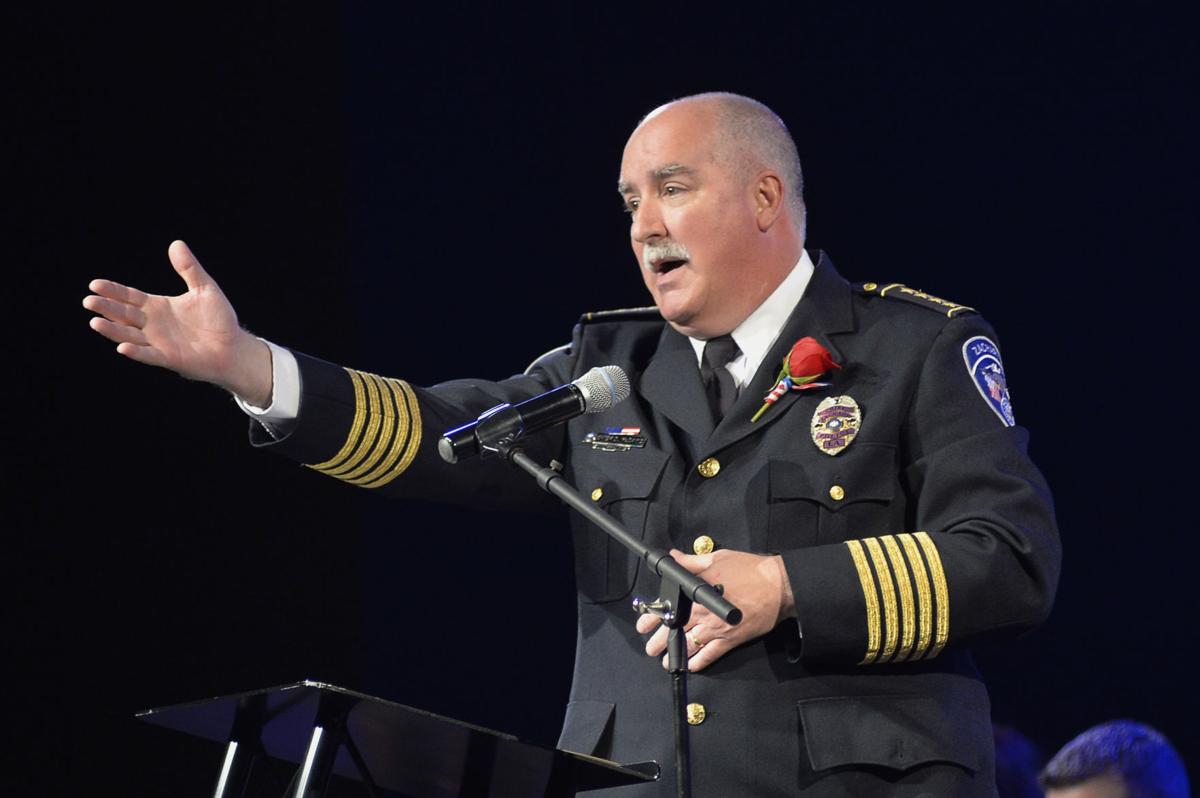 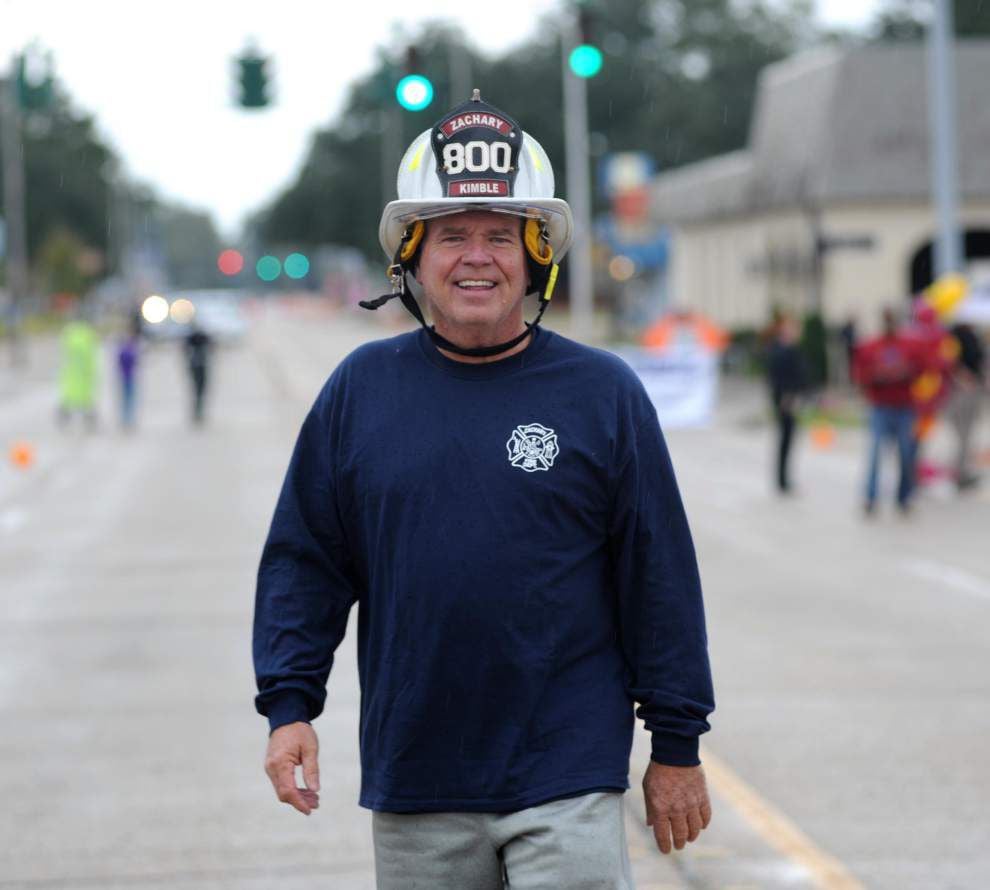 Baker Police Chief Carl Dunn explains the benefits and features of the Angel Armor equipment July 23, 2019. The advanced body armor was donated to the department from the Capital Area Law Enforcement Foundation.

Three Baton Rouge officers were ambushed and killed a little more than three years ago, and an initiative started in response to that tragedy provides added protection to Baker Police officers and will soon expand to both the Zachary Police and Fire departments.

Retired Baton Rouge Police Chief Pat Englade led the force during noted serial killer investigations, but the horror of losing three law enforcement officers with two others wounded made a lasting impression on him. It also showed the vulnerability of traditional bullet-proof vests that lack the ability to stop rounds from assault and high-powered sniper weapons.

Englade went on a mission to protect and serve those who protect and serve in the greater Baton Rouge area. Led by Englade, the Capital Area Law Enforcement Foundation, a nonprofit group, was established a month after the deadly ambush. Finding advanced body armor products and distributing them to police and first responders became the guiding mission of the foundation.

Many saw the retired police chief as coming out of retirement while others saw him doing what came naturally when the city struggled to come to grips the police shooting deaths. “I think it found me; it was there hanging and I said, ‘We've got to do something.’ The more I talked with the surrounding agencies, I realized how many guys we had walking around with expired vests or no vests at all. We had to do something.”

The chance of dying from a gunshot wound to the torso is 3.4 times higher for law enforcement officers not wearing armor. The CALEF website says that 1,512 law enforcement officers died in the line of duty over the past decade. Based on the number of deaths per 50,000 officers, Louisiana had the ninth highest average of officer deaths from 2008-2012 with 6.7% average officer’s lives lost per year and 21 deaths total.

Englade and a panel that included a widow of one of the fallen officers researched and tested gear and decided on Angel Armor for the advanced body armor. Unlike traditional vests, the Angel Armor provides the added protection from high-powered and assault rifles. Englade explained that both the Baton Rouge shooter and the Dallas police sniper used weapons more powerful than the vests worn by the victims. “The plates protect center mass and the vital organs,” he said. “It gives an officer a chance to survive; that’s what it’s there for.”

The Zachary Fire Department will receive 25 vests adapted to the needs of firefighters. The fire vest is a little lighter and will only be worn when the fire responders are on calls that might turn dangerous and involve shootings. Englade said with an increase of firefighters getting shot, the foundation was concerned for local firefighters. “We sat down with the fire departments in the parish, and we are now trying to work our way into trying to assist them too.”

Englade said the departments were thrilled to receive the help. “It’s a struggle in your budget because each chief must also plan for weather events that may or may not affect department spending,” he said.

Zachary Fire Chief Danny Kimble said the body armor donations fills a big gap for his crew. “Fire service has changed tremendously, and we face so many more challenges than we used to face,” Kimble said. “It seems today, people have low regard for life and we get put into some dangerous situations and up until this happened, we don’t have the protection.”

Kimble noted recent encounters where firefighters were shot on duty. He hopes his fighters never need it, but he said he is pleased that his staff will have the vest available. “The funds that could have been spent on the vests can be used on something else,” he said. “We must be good stewards of our money.”

All the men working each day will have access to the body armor with a few extra on hand for their reserve firefighters who could be called up on a given day.

“CALEF is a great organization and if any businesses or organizations would like to make a contribution to them, we would really appreciate it,” Kimble said. “Anybody can make a donation because they are helping the Zachary Police Department and Fire Department.”

The foundation is working to equip Zachary Fire and Police departments and Southern University. “The little agencies can be accommodated quickly, but the large agencies are a challenge,” Englade said. “To replace all the vests for EBR is about half a million dollars.

“When you look at your budget, those vests start falling down on the list as you think about public safety first,” Englade said.

He added that 100% of what the foundation brings in goes to providing body armor and services. “We rely on the public for every nickel,” he said. “We try to solicit some grants if we can, but most of it comes through fundraisers.”

CALEF holds a golf tournament each spring and a different type of fundraiser each fall. This fall, the Bulls Eyes and Badges II Sporting Clay Competition will benefit the foundation. It will be Sept. 13 at the Bridgeview Gun Club in Port Allen.

The Baker Police Department has already benefited from the body armor and will benefit in the future as the updates are received. Police Chief Carl Dunn was so touched by the generous and life-saving donation to his staff that he said he was near tears. In addition to the advanced body armor, CALEF also restocked the Baker police office with soft-body armor that fits under the vests.

He said it provides protection and peace of mind to his officers and their families. “There’s an extra layer of security and comfort to know the vest is being worn,” he said. “A lot of people have the misconception that the regular vests can stop everything, but they can’t stop assault rifles.”

The chief has a vest that he wears when on calls that might involve firearms. “You have to realize that your family wants to see you in that body armor because it gives them that extra layer of comfort to know you have your vest on because they are afraid for you every day.”

Zachary Chief David McDavid echoes the sentiment. “It’s a game-changer for officers’ safety,” he said. “Our goal every day is to make sure that the men and women of the Zachary Police Force get home safely and these vests will protect them throughout their career.”

McDavid acknowledges that this equipment is unique because it will be a part of his officers’ vital tools, but also because it was a gift that reflects concern from the public. No taxpayer funds were used to purchase the equipment.

“We want to thank Chief Englade, CALEF, Angel Armor and the people who went out and worked hard to provide these vests through donations,” he said. “It means the world to us that people still care, and they want to make sure that each day an officer gets to go home safe. We think this is going to be a game-changer to protect the young men and women who are out here on the streets each day to protect and serve.”

For information about the foundation or to make a donation, visit www.calef.la.