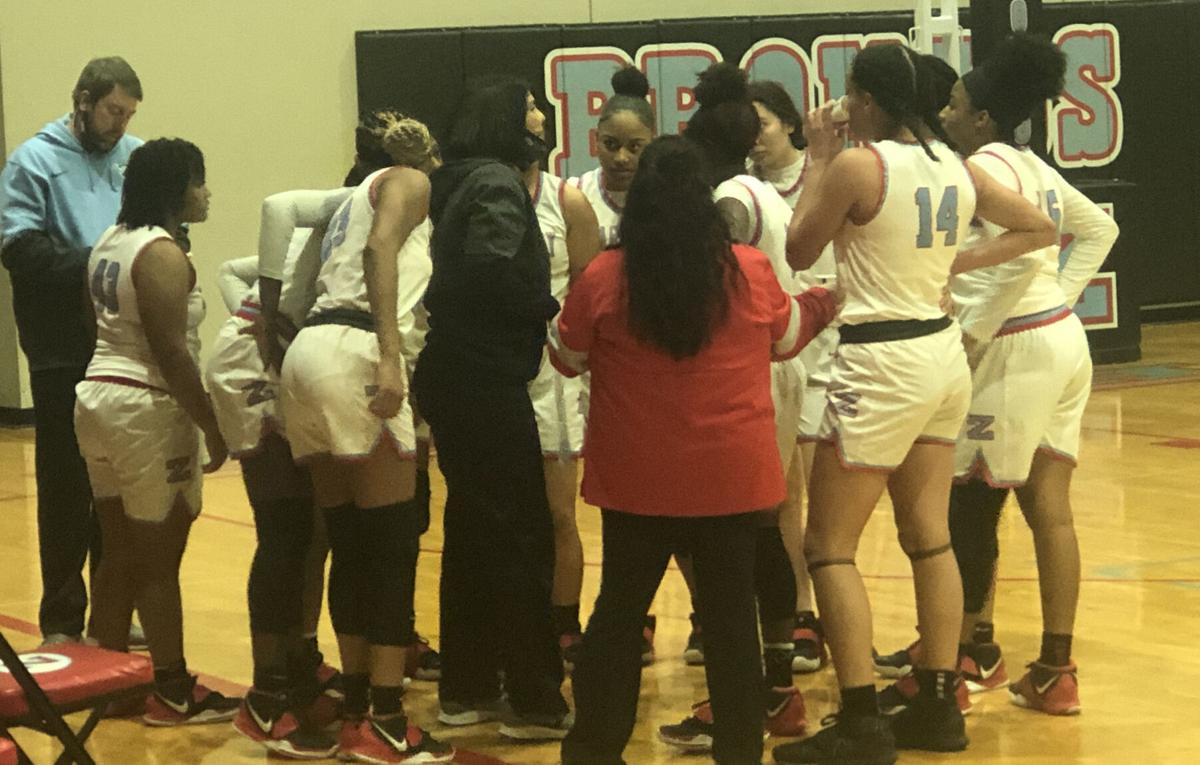 Coach Tami McClure provides direction during a time out of Zachary's recent game against Scotlandville.

Coach Tami McClure provides direction during a time out of Zachary's recent game against Scotlandville.

On Feb. 12, the Zachary High Lady Broncos concluded a challenging COVID-19-restricted regular season with a 43-52 loss to the Scotlandville Lady Hornets.

As the rain and cold weather blew in, both teams struggled to warm up and find offense. The Lady Broncos led by a 5-4 score at the end of the first period.

Things would pick up in the second as the Lady Hornets would tie the score and the Lady Broncos would respond with a 3-pointer by Sakura Knight to extend the Lady Broncos lead to 3. Scotlandville would begin to implement a full-court press and extent to a 9-point lead with 2:30 left in the half.

A layup by Zoa Adams would cut the lead to 7 as the teams traded baskets to end the half. Adams would provide a buzzer-beating shot to cut the Lady Hornets lead to 8 at the intermission.

Undaunted, the Lady Broncos would fight back with a layup by Adams and a follow up after a missed free throw by Howard. The third period would see the Lady Broncos tighten the score and enter the fourth down 30-37.

The Lady Hornets would go into the fourth with several players sporting 3 and 4 fouls after the Lady Broncos repeatedly pounded the ball inside during the third. Offensively, the Lady Hornets tried to slow the game down. Strong defense, a layup and subsequent free throws by Howard cut the lead to 2 with 4:47 remaining. Scotlandville would answer and the shots just wouldn’t fall in the final 2 minutes as Scotlandville became deadly from the free-throw line.

The Lady Broncos were led by Kali Howard who scored 13 points on the night, George and Adams would provide 8 and 7 points, respectively.

“We just did not execute on offense or defense, we missed a lot of easy shots, missed to many free throws and had too many turnovers,” Broncos coach Tami McClure lamented. McClure gave Scotlandville credit, “they did what they needed to do and made their free throws and hit key shots.”

The Lady Broncos roller-coaster season would see the cancellation of eight game including two district games against Denham Springs and Live Oak. Nonetheless, they would finish the regular season with one loss in District 4-5A, that included a victory over the 2 seed in 5A Walker. “We had great momentum after the Walker game and then we had to sit 2 games and almost didn’t have this one tonight,” McClure said.

At the time of writing, the power rankings put the Lady Broncos as a 7 seed, which would assure them of a home opener in the forthcoming LHSAA 5A playoffs. McClure said the 5A playoffs "will be really interesting as you have teams smack in the middle who normally would be ranked in the top 4 but due to cancellations are in the middle of the pack” This should affect the competition as McClure notes that “this will be probably one of the toughest brackets I have seen in a long time.”

McClure is thankful that the Lady Broncos will likely have at least one home game in the 5A playoffs. Stay tuned for information on schedules.